on July 11, 2020
Over the years, I've been a huge fan of the concept of Topps' Heritage line.  I love the homage to all of the old sets using modern players and I greatly prefer Heritage to sets like Topps' flagship most years.  That all being said, any set collector will probably tell you that trying to collect Topps Heritage is a lesson is self-hatred.
For as nice as the set looks year in and year out, Topps has loved to make it nearly impossible to actually collect by loading it up with short prints...and not Allen & Ginter style 1:2 pack short prints but rather actual short prints where you only get a few per hobby box.
Anyhow, when I was younger and much more foolish, I actually tried to collect a number of Heritage sets.  It didn't take me too long (maybe about seven or eight years) to realize that my want list was quickly being inundated with Heritage short print wants...and once I finally realized how hard the Heritage sets were to actually complete I swore off buying any more Heritage until I actually completed the old Heritage sets that I had started.
Well, I'm not done with every Heritage set on my want list but I did manage to finish off a biggie!  The 2008 Topps Heritage set is now complete thanks to my COMC purchase of the final five short prints that I needed!
Of the five missing short prints, all came from the low series of 2008 Heritage (I had already completed the high series).  Only one of the short prints was a "regular" short print which was this Augie Ojeda. 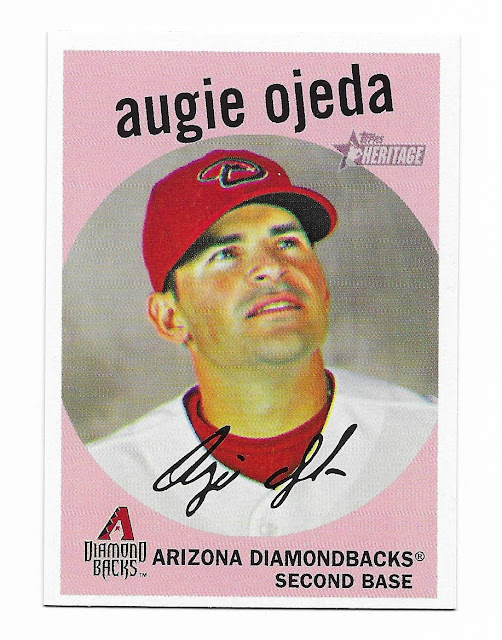 I've never heard of Augie but Baseball Reference informs me that he had a 9 year MLB career with three different teams (Diamondbacks, Cubs, and Twins).  A .234 career batting average is probably why I don't know anything about him but he does get the "honor" of being one of the last cards I needed for my Heritage set and I'll probably always remember him for that particular feat.
The remaining four short prints were all part of the All-Star subset. 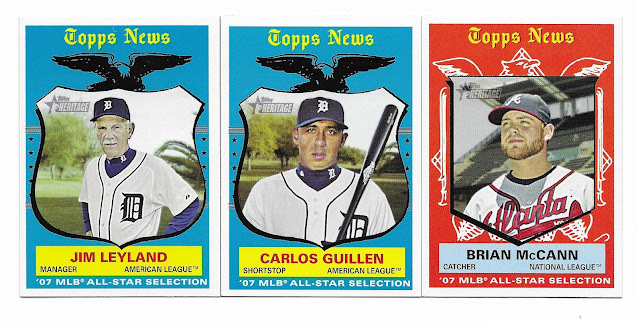 Of the four All-Star cards that I needed, only one was a National Leaguer:  Brian McCann.  Somehow I wasn't even ever able to trade for a manager card...  In fact, who would have thought that a guy like Augie Ojeda would have been impossible to even trade for in over a decade?!
None of the four cards shown so far were terribly expensive but I did have to (probably) overpay a bit to get the fifth and final card that I needed for my set: 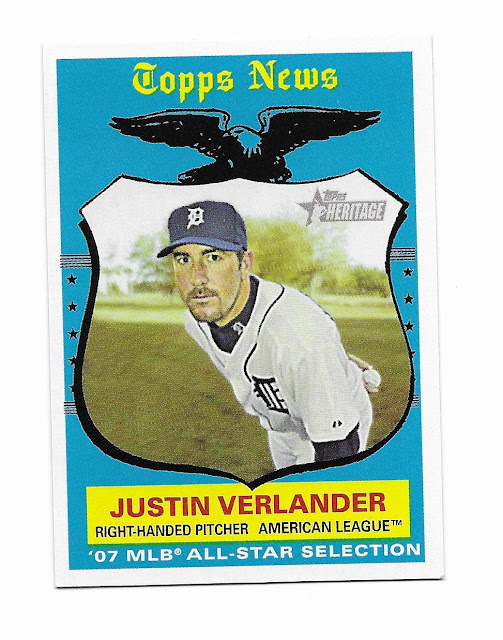 That's the Justin Verlander All-Star short print and it set me back more than I would have liked (COMC is down at the time of my writing this post but if memory serves correctly this was the most expensive card in my most recent order).
While I'm certainly ecstatic to be able to cross the 2008 Topps Heritage set off of my want list finally, I do have a second 2008 set that I'm still working on:

The Goudey set is even more ridiculous in terms of short prints than the 2008 Heritage set was...but I'm nothing if not stubborn so perhaps someday I'll finish that set off as well.
There's still more to show off from my COMC order - all of which will be more complete sets!
For now though, I'll simply bask in the joy that is another completed set!  Someday, I'll have to show off my full 2008 Heritage set collection...I think other than the relics/autos that I have a full master set!  Like I said, back in 2008 I was a young, naive (and perhaps stupid) card collector who went whole hog after everything that caught my eye.  At least now I'm a bit more discerning...or as I call it, I'm finally learning!
Check Out My Cards Topps Heritage 2008