Flashback Friday: The Next Six Packs from 2001 Upper Deck Vintage!

I know that I opened up six packs a couple of days ago (and not on a Flashback Friday) but that's what happens when I'm trying to get this box opened, scanned, a collated before the next semester of work begins for me!  Here we go with packs 13 - 18!

As a reminder, I requested (and received) this box as a birthday present last year since I am still trying to complete the entire base set.  Thus, while it'd be cool to find a rare relic (seeded 1:72 at best), my real goal is to finish my set!  As such, it hasn't been a great box so far in terms of duplicates within the box (never mind all of the duplicates as compared to my current set).  The six packs I opened today had four duplicates within the packs themselves and then a total of 11 when compared to the entire box.

Overall, I've now pulled 27 duplicates from the box itself - simply inexcusable for a set this large!

I did manage to pull three more inserts though - including a Derek Jeter All-Star Tribute which is basically a box hit (seeded 1:23 packs).

And, you might be wondering, how did I do getting new base cards with this group of packs?  Well...I got exactly one new card. 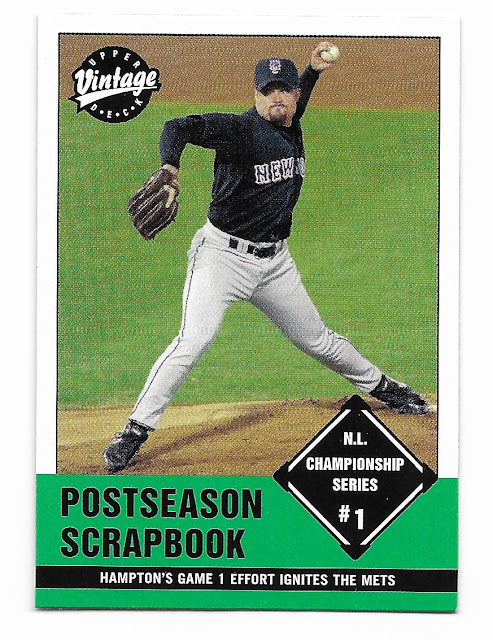 Oof.  This box isn't going well at all for me.  One last set of six packs to rip and then I'll be uploading my want list into TCDB and hoping for better luck over there.  On the bright side, I've got plenty of trade bait for the 2001 Vintage set now if anyone else is trying to build the thing!