Based on the mail that's shown up this past week, I'd say that the USPS is definitely getting closer and closer to being caught up again.  At this point, I'm only waiting one more trade that was agreed upon in 2020...and that particular person on TCDB still hasn't sent my cards so I can't blame the USPS for that one!

I've got lots of fun stuff to show off today, so let's jump right in! 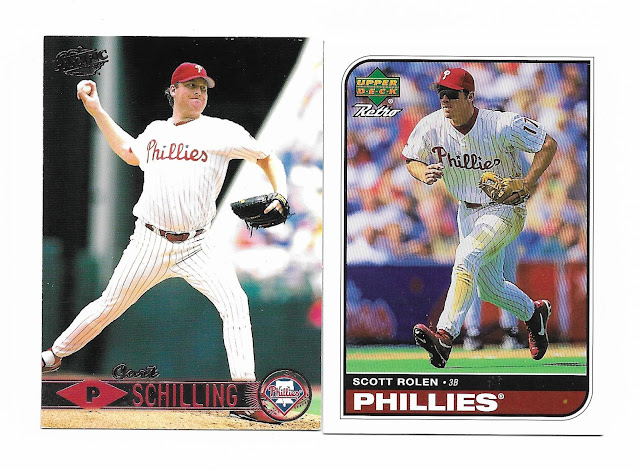 We begin with my first trade of 2021, a simple 3-for-3 swap with user herkojerko.  Based on our trade, I'd wager that herkojerko is a Phillies fan since that's what he wanted...and two of the three cards he sent me were (presumably) duplicate Phillies from within his own collection. 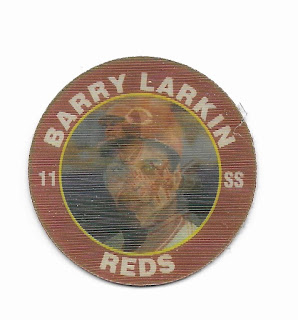 The third "card" in the trade was actually a 7-Eleven coin of Barry Larkin - one of the many oddball cards that I'm trying to track down for my main player collection!

Net gain of cards this week (so far) from TCDB trades:  +0

Next up, a user (NYMHall) that lives in Corning - a city that's fairly close to where I live!  Kind of fun to trade with someone "local" (for me "local" means within a 30-40 minute drive).  Trust me, where I live that is probably as local as I'll ever get!

NYMHall had a whole bunch of Francisco Lindor cards that he wanted (based on his user name, I suspect I know why) and in return he sent along some set help for me... 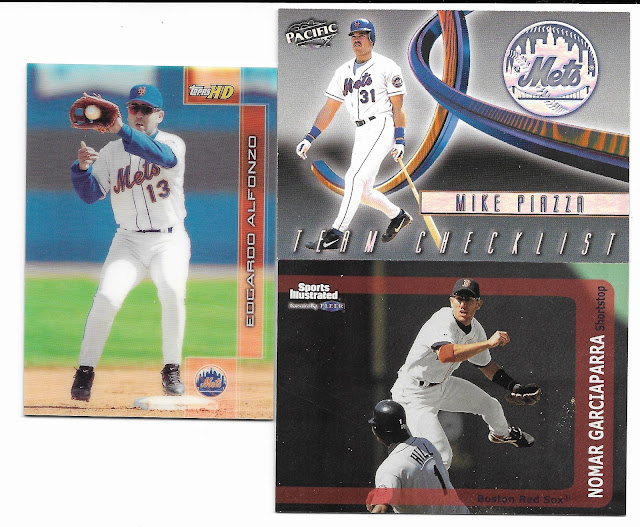 ...as well as some more Larkin cards including a couple of cool playing cards that were new to my collection. 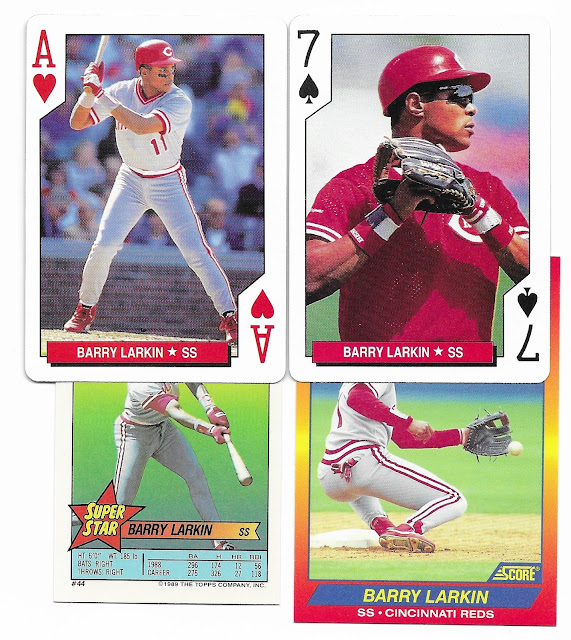 Net gain of cards this week (so far) from TCDB trades:  +1

On the major projects that I've been working on over the past month or so is trying to get my Barry Larkin Collection fully sorted and uploaded into the TCDB database.  In doing so, I'm able to make an actual want list for the Barry Larkin cards that I need!  I've only managed to get up through 1994 completed in TCDB but even having just the years 1986 - 1994 uploaded as given me a lot more to trade for - as you can see from the two previous trades this week but also from our next trade.

This particular swap was with user lsouthard and I sent him 9 different cards in exchange for three rare-ish Barry Larkin cards (I say rare-ish since nothing from 1992/93 is exactly rare). 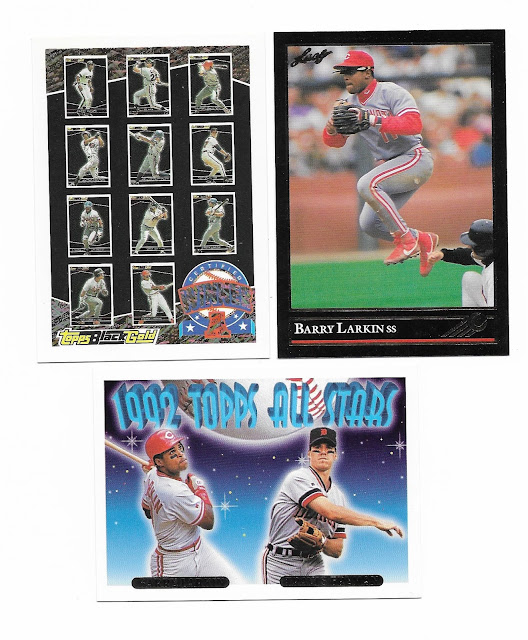 How I never had that Leaf card before now is a mystery but at least it's all mine finally!  Like I said, this was a great week for the early years of my Barry Larkin binder!

Net gain of cards this week (so far) from TCDB trades:  -5

The next trade that arrived was from user kapa64.  This is one of the rarer trades where I received way more cards than I sent out (16 for me, only six for kapa64).  It was definitely a case of quantity versus quality though! 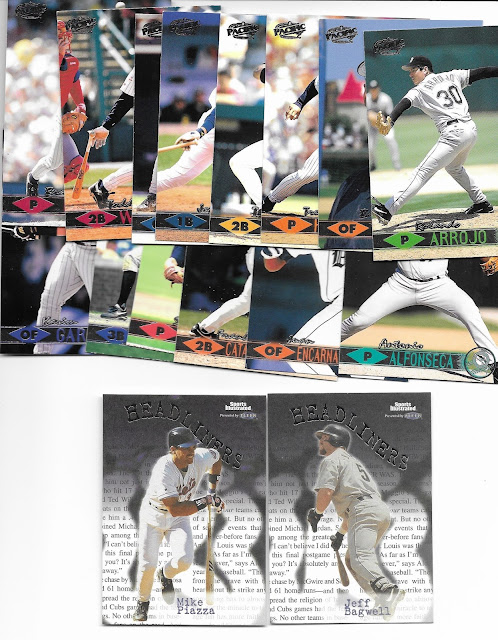 For myself, I ended up with 14 more base cards from the 1999 Pacific set as well as a pair of Headliner inserts from 1999 Fleer Sports Illustrated.  It's funny how that 1999 Pacific set languished on my want list for well over a decade with virtually no hits but as soon as I moved over to TCDB it feels like every other trade I do includes at least one card from that set!  I'm not complaining though, it feels good to get closer and closer to completing another big set from my childhood!

Net gain of cards this week (so far) from TCDB trades:  +5

My next swap was with user nwcardsupplies.  I probably "overpaid" a bit on this one - I sent him six of the fairly rare 2017 Topps Gallery Hall of Fame inserts in exchange for nine cards for myself (six set needs and three Larkin Collection needs). 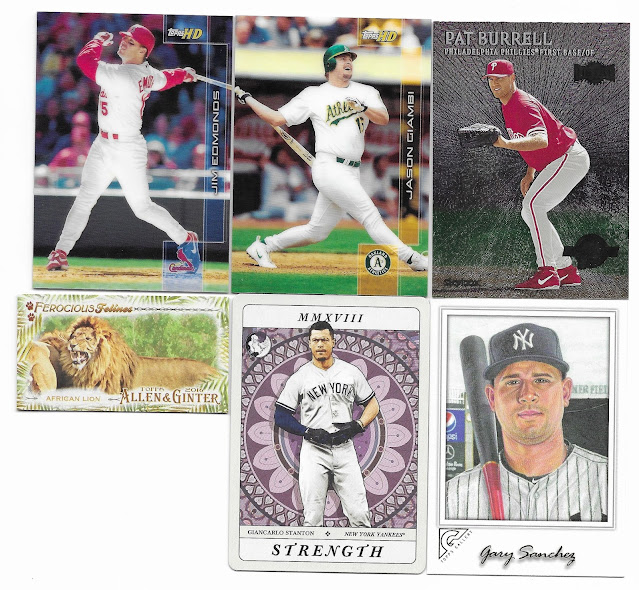 On the other hand, I was able to grab cards from both the 2001 Topps HD set and the 2000 Metal set, both sets that have been kind of tough to come by lately (so on second thought, maybe I didn't overpay after all)!

As for the Larkins, nothing super rare or anything but it's three more that I didn't previously own!  Funny that I never had that Bowman card at least, that can't be rare at all (but it goes to show you how much I've always avoided Bowman I guess)!

Net gain of cards this week (so far) from TCDB trades:  +8

We aren't done yet with the mail!

Next up, from user FSCGrad777 comes three cards for me - all from different sets.

Hard to say what the big "get" here is - it's got to either be the Hamilton Stadium Club Chrome card (boy has Josh Hamilton's "star" faded in a hurry though) or that Fleer Focus of Steve Lomasney which happens to be one of the serially-numbered Prospects cards in the base set.  Actually, this is an easy choice - it's the Fleer Focus card because the Stadium Club Chrome card was sent in error...I actually needed (and requested) the "regular" Stadium Club card of Hamilton instead.

Net gain of cards this week (so far) from TCDB trades:  +7

My next trade was with CubinSTLsets and it was a simple one-for-one swap...but the one card that I got was the last card I needed for my 2018 Topps Allen & Ginter World Talent insert set. 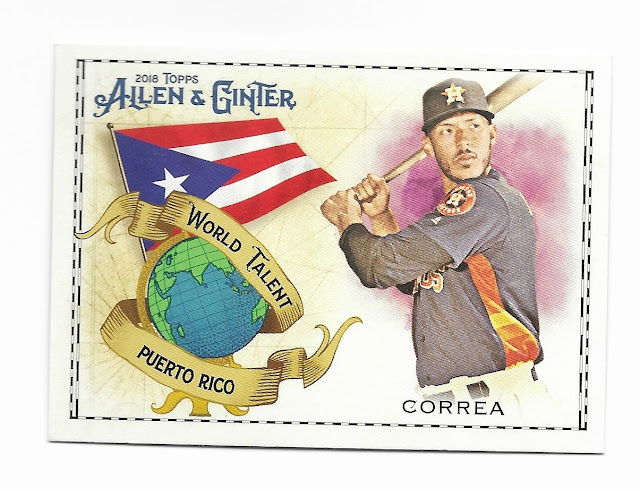 Yay!  My first completed set in 2021!  I've actually tried to trade for this very card numerous times on TCDB and for whatever reason, my trade proposals either got rejected or ignored time after time.  Finally, in a bit of desperation I offered up a single card (since that's all I had that CubinSTLsets wanted) for it and ended up getting lucky!

Net gain of cards this week (so far) from TCDB trades:  +7

And last, but certainly not least we have a PWE from user ebernerd. 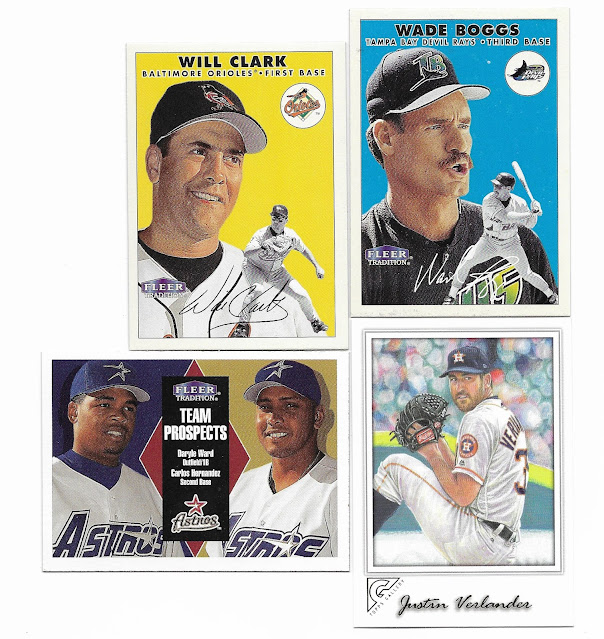 This wasn't a trade per se but rather a purchase.  He had a few cards I wanted and since I didn't have anything he needed in return, we worked out a small sale.  I ended up with one incorrect card but otherwise I'm happy enough with the swap - lots of new Larkins for me as well as a couple of set needs (kind of a theme for this week in trading, wasn't it)?! 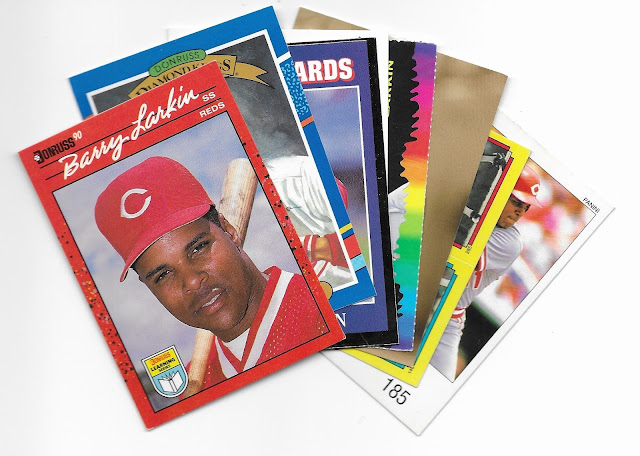 That does it for another week's worth of TCDB trades.  As usual, I've enjoyed the process of trading and I've enjoyed clearing out some unwanted cards for wanted cards even more!  I'm not sure I'll have as many envelopes to show off next week - at the moment I haven't actually completed too many more new swaps but hopefully that picks up again real soon!

That's all for now, have a good week everyone!