This past Tuesday was another Breaker's Club night of box breaks.  Before I get to the spoils of the break, I want to make a quick plug for next week's breaks.  First, it'll be the last week for my first ever Breaker's Club.  Second, in addition to the Breaker's Club boxes I am also going to be busting a third box - a box of 2003 Fleer Authentix which is a group break that anyone can join (go here for break details). 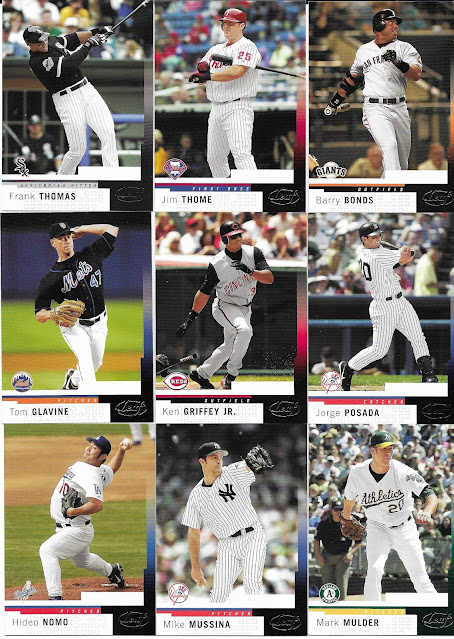 With that out of the way, let's get to the goodies from the previous break.  As always, you can find the entire group break video on my YouTube channel.

We'll begin with the box of 2004 Leaf (a sampling of the base cards is shown at the top of the post).

The box of 2004 Leaf promised 24 packs with 8 cards per pack which made for a lot of cards to go through!  Besides relics, the other main "gimmick" of the 2004 Leaf set is their Exhibits insert set which is a 50 subject checklist with each subject having 46 variations...all of which are serially numbered.  The box promises "three per box on average" but as you'll see in a moment, our box vastly outperformed that estimate.

In fact, let's begin with the Exhibit cards since these were the cards that I personally was most looking forward to.  Barry Larkin is on the Exhibits checklist so you can imagine who I was hoping we'd pull. 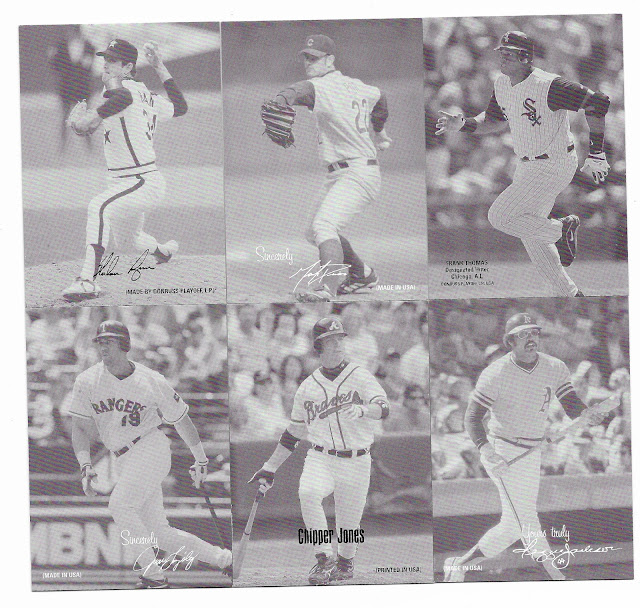 Alas, no Larkin but we did do quite well for a number of people in the group break!  Here's the numbering on each of those cards:

Not bad at all!  That Thomas out of 26 has to be my personal favorite but I also love the look of the Nolan Ryan card.  Also, did you notice we pulled six different Exhibits cards rather than the promised three?  Yeah, this box was good to us!

We pulled a total of five Press Proof parallels - three of the common red variety and two of the rarer blue variety. 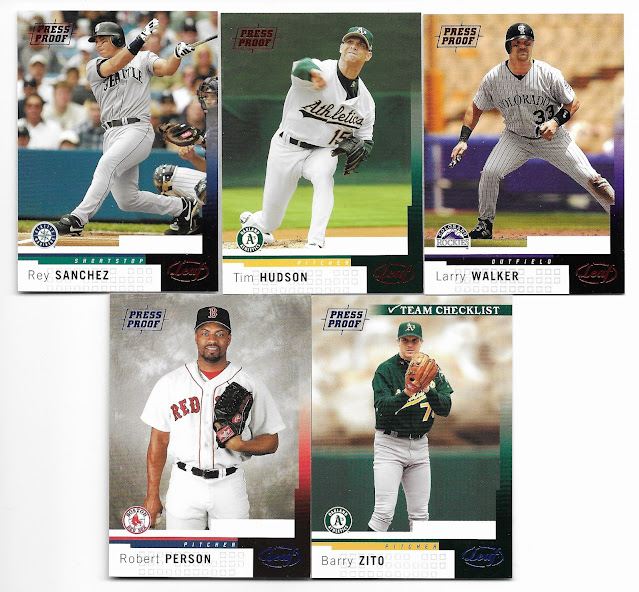 Moving on to the MVP Winners, we found four total - three of the regular variety: 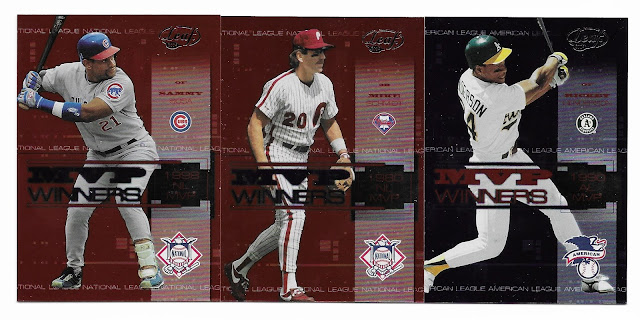 Plus one Gold parallel: 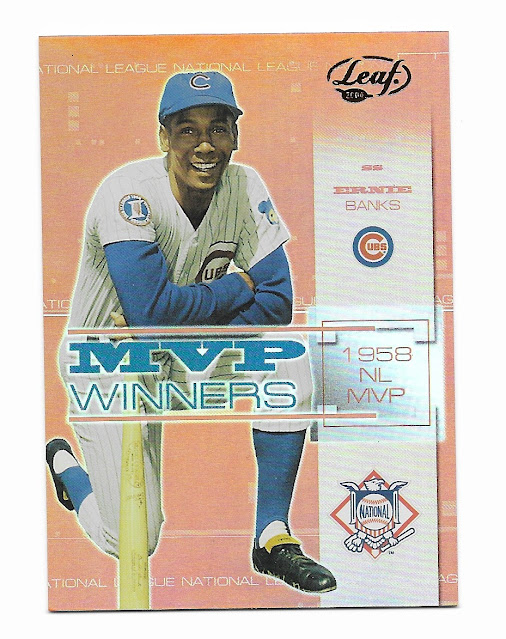 The Banks is numbered 386/500 and is a gorgeous looking card!

Our box also produced a single Leaf Limited preview card - this one being Jason Giambi and it's numbered 040/100 on the back. 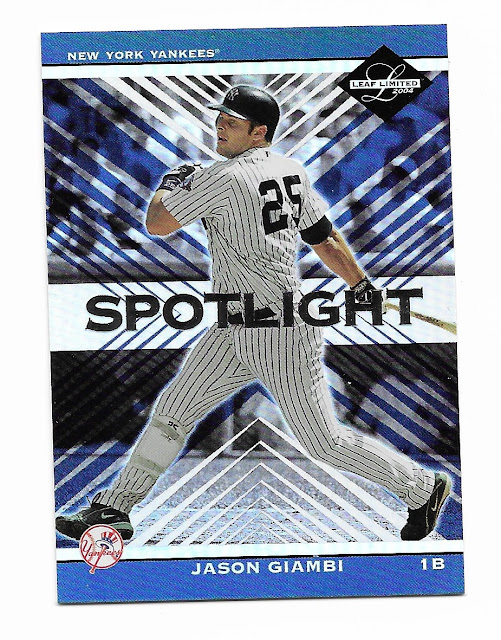 Other teams got in on the insert action as well, though none of what you see below is serially numbered. 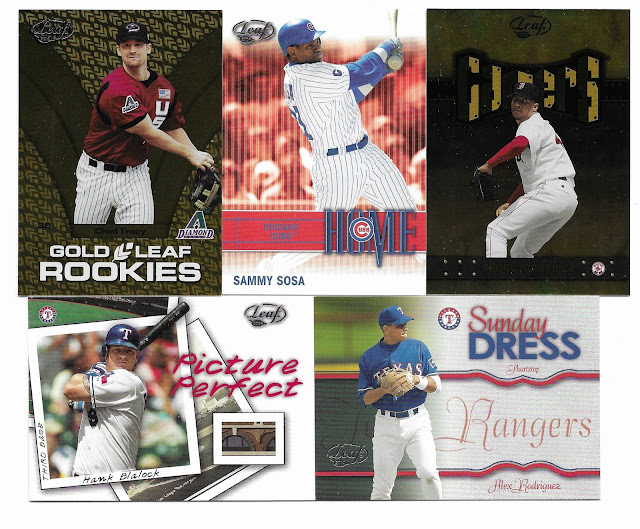 The Sosa "Home" card has a corresponding "Away" version - kind of a unique idea for an insert set I guess though the checklist is only 10 subjects deep so most teams had no shot at getting a card from that particular set.

Finally, the two hits of the box:

The Dunn is a true beauty (and I was happy to pull it)!  It's numbered 23/50 on the back but more importantly it's got a wonderful patch on the front.  I didn't realize it when I opened the pack live but the card clearly states that the patch is part of Dunn's game-worn jersey number!

That does it for the box 2004 Leaf.  In my eyes, this was a great box that overproduced goodies for us!  of course, I'm happy with that Dunn patch card but I think a lot of people should be satisfied with the box.  In addition, the box produced a whole bunch of nice looking base cards for all teams - so overall this was kind of a perfect group break box!

Before I get to the 2018 Topps Gallery set, I'd be remiss if I didn't show off one of the "bonus pack" cards we pulled: 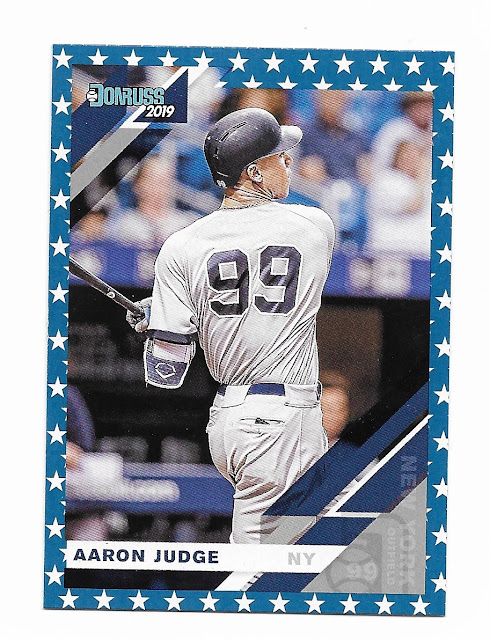 That's a Stars parallel of Aaron Judge from the 2019 Panini Donruss set.  Kind of cool to pull a nifty parallel in a bonus pack (the card is printed on a thicker card stock than the usual 2019 Donruss cards as well so it literally feels special compared to the regular base cards).

And now (finally), we can take a look at our box of 2018 Topps Gallery.   Actually, this ended up being two boxes of 2018 Topps Gallery thanks to the first box arriving damaged.  Once I got the replacement box, I was able to keep the damaged one so I included those contents in the break as pure "bonus" cards.  As you'll see, it was the damaged box that was the better box overall, even with the box topper being creased up.

Speaking of box toppers, here they are: 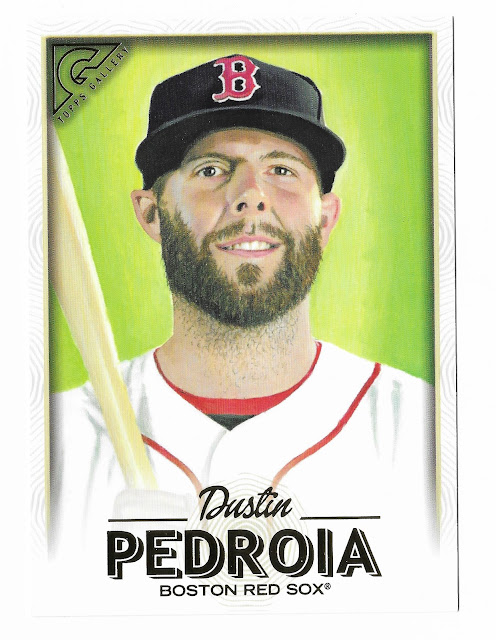 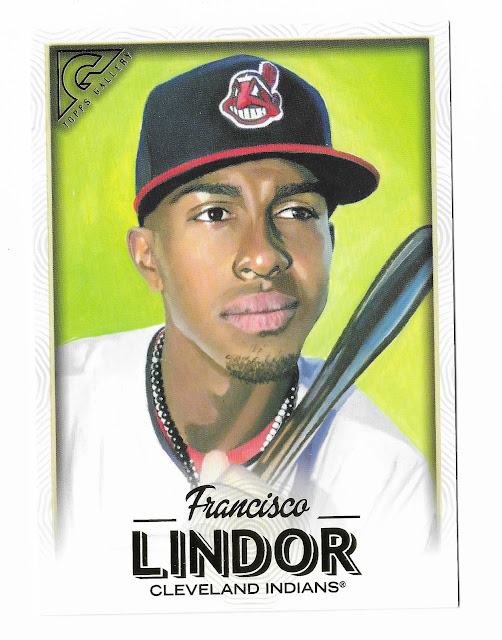 Like I said, the main damage to the second box seemed to focus on the box topper.  The Lindor is the card that is creased more or less in the middle of the card (there's also corner damage on at least two of the four corners).  That all said, I'm still going to include this card in the Indian's pile since it's a true bonus for the Breaker's Club.

The 2018 Gallery set has a nice, solid base design but it's the rookies in the set that probably drive the current high prices for boxes!  Look at the selection of just some of the rookies we pulled out of the first box alone! 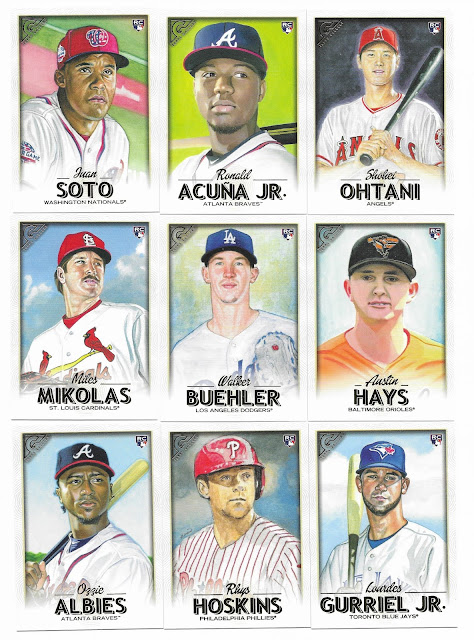 Wow!  The box also produced four short prints (Nolan Arenado, Nelson Cruz, Gary Sanchez, and Khris Davis).  I didn't bother to scan them since this recap post has gotten long enough!  In fact, I'm not going to scan the other inserts from Gallery either.  Instead, feel free to watch the video!  I will, however, show off the hits from box #1 beginning with the two parallels we found: 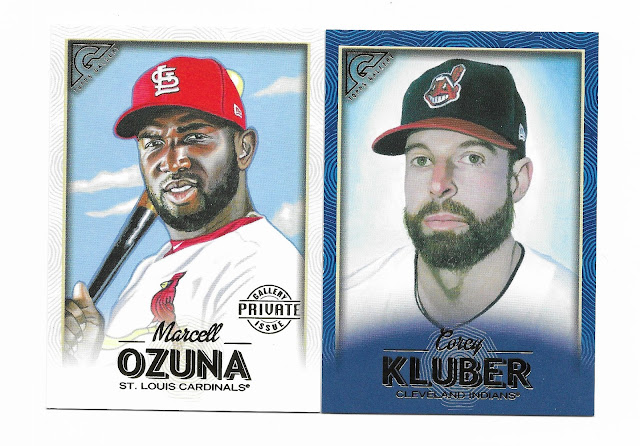 Finally, the pair of promised autographs - both of the rookie variety: 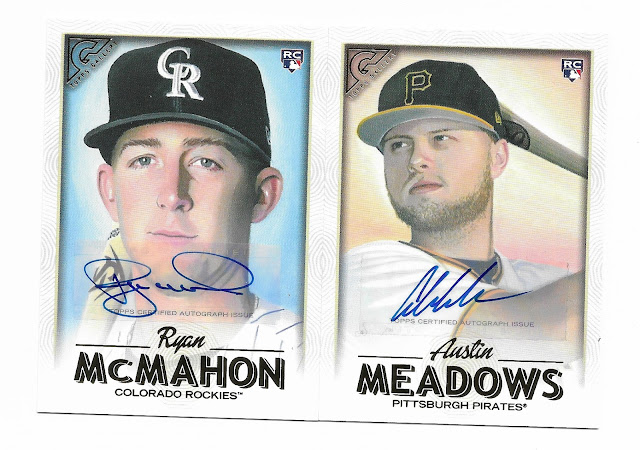 The Austin Meadows auto is quite nice - and as a group break host I was happy to see the Pirates land a hit (a team that doesn't seem to get as many hits as a lot of other teams these days).  As for the Rockies, I think this is the second Colorado hit of the Breaker's Club - not bad at all for the Rockies!

Now, for the second box (i.e. the damaged bonus box).

Like I said earlier, the box topper (shown above) was definitely heavily damaged but the rest of the base cards appear to be okay.  Of course, if you have an eye for grading cards you may disagree with me but hey, these are bonus cards, right?!

First, some more notable rookies (including a bunch making their second appearance in the break).  I don't think anyone will mind getting two of some of those rookie cards! 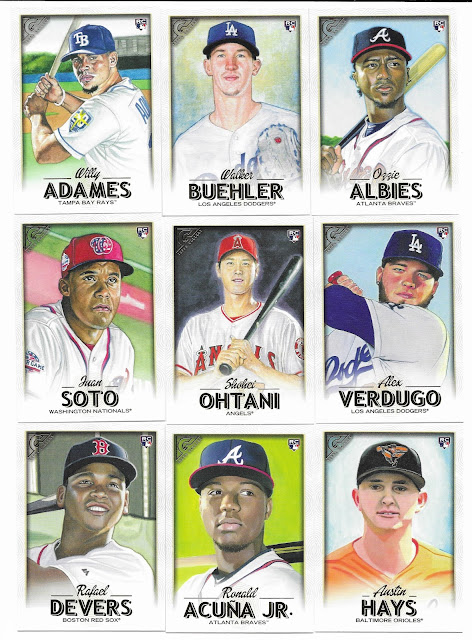 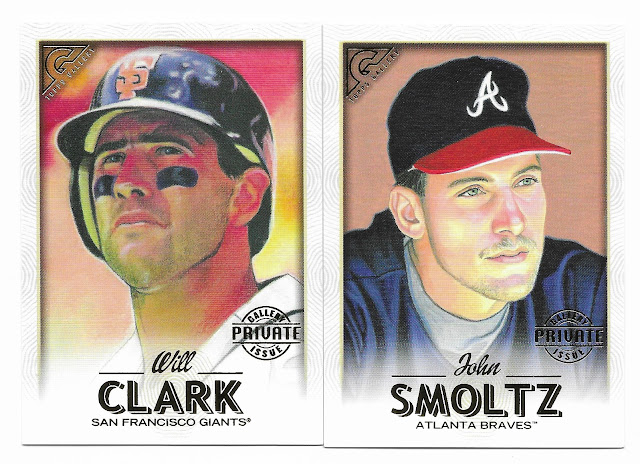 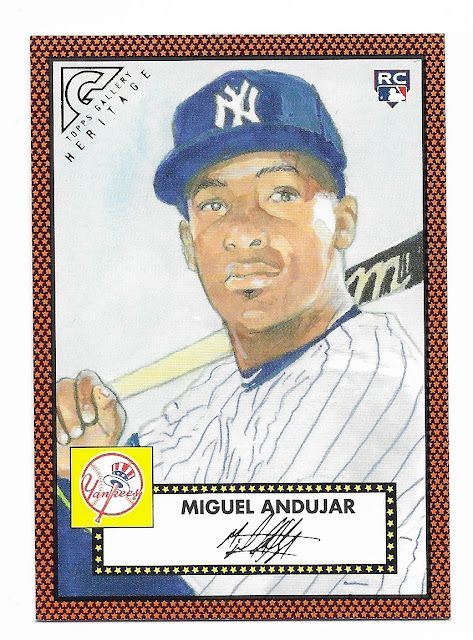 That's an orange parallel of the Topps Gallery Heritage insert of Miguel Andujar.  The card is numbered 5/25 on the back...and the orange Heritage cards are seeded 1:1,292 packs!!

Finally, the two promised autographs - and both are quite nice! 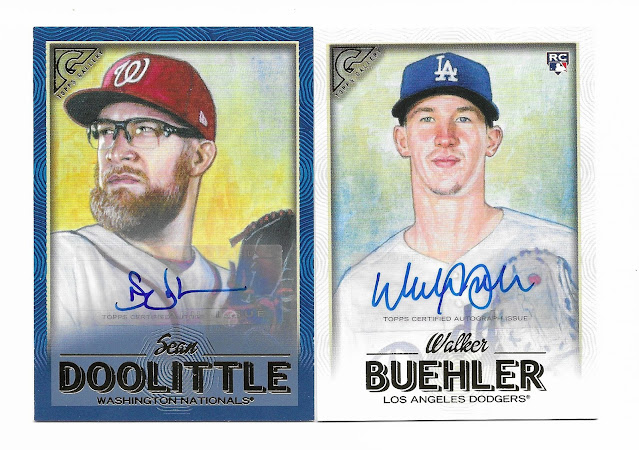 The Doolittle is a blue parallel #05/50.  Blue autos are seeded 1:132 packs.  The other auto (Walker Buehler rookie auto) is a "regular" auto but it probably has the chance to be the best card pulled from any of the three boxes when all is said and done!

Needless to say, I was super pleased with the bonus box - and really, other than the ruined box topper the rest of the cards appear to be okay.  I hope everyone has enjoyed following along with my first ever Breaker's Club.  Next week is the final week for this particular club, but then I do hope to hold sign-ups for the next Breaker's Club!  More on that at a later date!