This past Tuesday, I hosted a pair of group breaks.  The first was a box of 2021 Topps Series 1 (which was a "regular" group break) and then the second was the next two boxes (1999 Pacific Private Stock and 2002 Topps T206) for my Breaker's Club.

If you'd like to see the break as it unfolded, here's the full video:

Now, let's take a look at some of the highlights.  Let's begin with the Breaker's Club boxes starting with 1999 Pacific Private Stock.

I'm a huge fan of Pacific and the 1999 Private Stock set is definitely a nice set (even if it isn't full of the typical over-the-top production that much of late 90s Pacific stuff is known for). 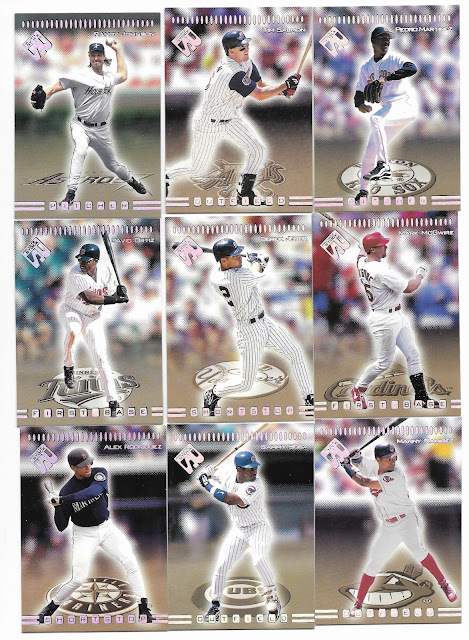 Each base card is printed on thicker-than-usual card stock and it definitely makes for a nice tactile set.  In addition, the use of the rainbow shimmer foil makes the base cards stand out even more from other cards of this era.  In short, it's a nice looking set - and as my loyal readers know, I'm a sucker for large team logos on my card fronts!

The "gimmick" of the Private Stock set is the one-per-pack mini card.  We ended up pulling quite a few of the bigger names in the set including Ken Griffey, Jr., Cal Ripken, Jr., and Frank Thomas among others. 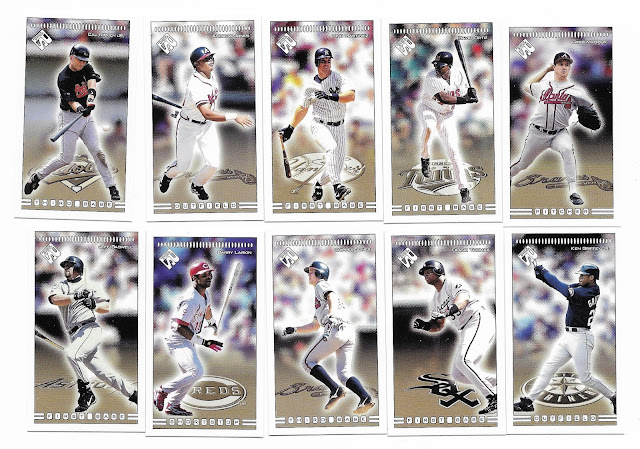 All of the minis in our box were of the common blue back variety except for one - the 1:25 pack red back parallel. 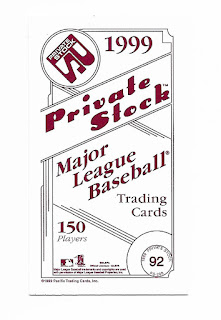 We pulled Jose Guillen of the Pirates which was nice from a group break host's perspective since the Pirates were claimed and Pittsburgh doesn't often get "good stuff" from a lot of boxes!

The only proper inserts in 1999 Private Stock are the 2:25 pack Home Run History cards.  We pulled two of those - both of Mark McGwire (the Cardinals are a great team to have in group breaks if the box in question is from the late 90s)! 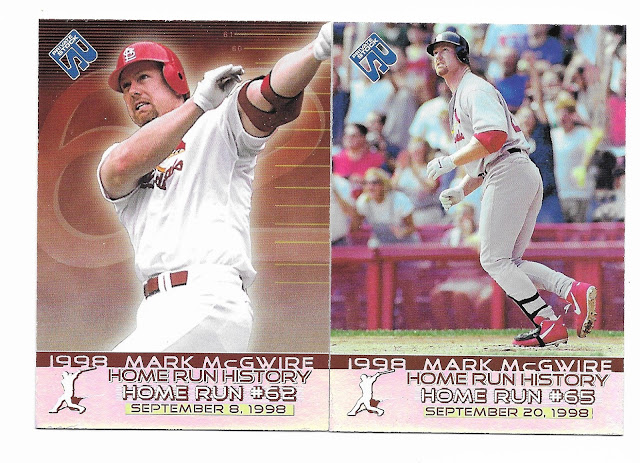 And finally, in hobby boxes of Private Stock there are four different base parallels to chase:

During the video break, I commented that I was hoping to pull a parallel of Barry Larkin...it was only when I started doing proper research as I wrote this post that I learned that the parallels are actually partial parallels - only the first 50 cards in the set have paralells!  Barry is card #110 in the set which explains why I have never seen one of his parallels in the wild.

For us, we did luck out and pull a parallel - in this case it was a Platinum Series parallel of Bernie Williams. 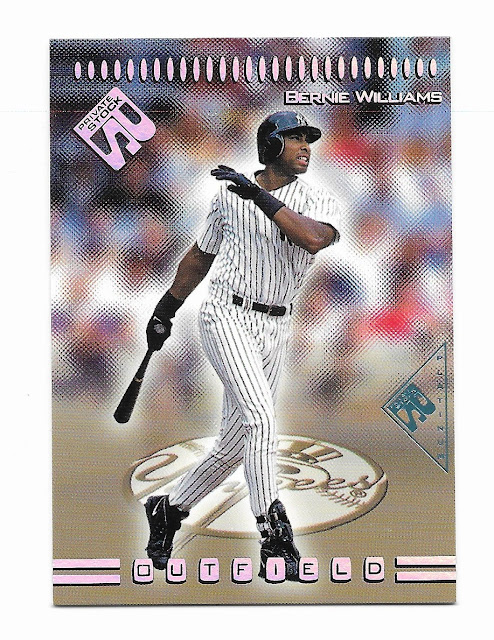 Overall, this was a fun box to open even if the collation wasn't the greatest (we pulled a bunch of base card duplicates).  For me, the draw of the 1999 Pacific set has to be the base set itself - it's a good looking design! 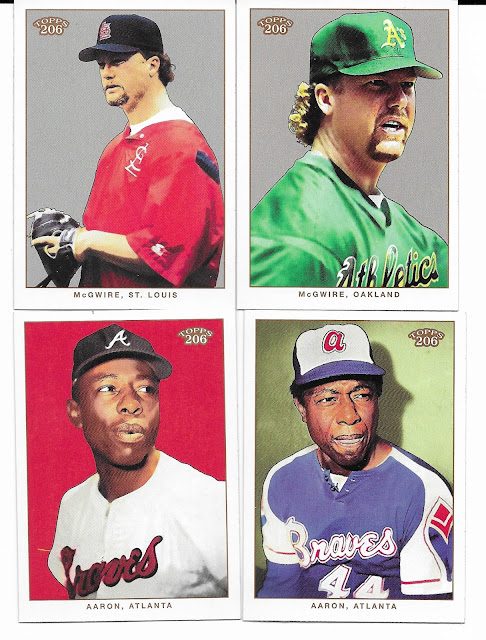 The 2002 Topps 206 set is kind of a confusing set - especially in Series 2 (which is what we opened).  There are a ton of variations (see above) but from what I could tell, only the "prospects" subset are actually considered short prints. 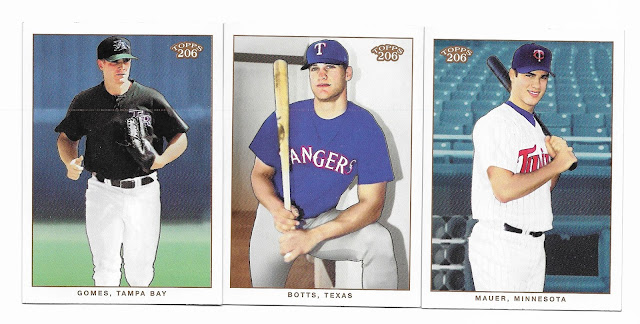 We pulled 11 such cards (out of the 15 in the subset) so it doesn't appear that they are overly difficult to find!

Moving on to the inserts, the first is the Team 206 set which basically acts as a dummy or decoy card in each pack that doesn't contain a hit.  Our box featured two packs with hits and the other 18 packs all contained a single Team 206 card. 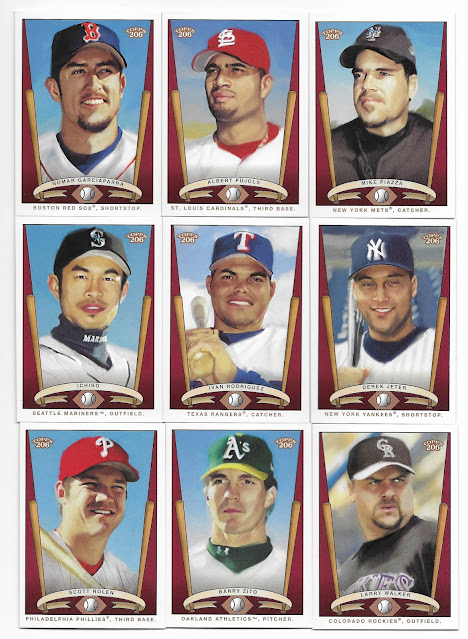 You can't tell from the scan, but it should be noted that these cards are nice and thick.  Also, there are a total of three different series in the 2002 206 set - the second series for the Team 206 inserts are all red, the first series is blue and the third series is the same red but with a 2003 copyright date on the card back.

Next, the minis!  Topps seeded mini cards one-per-pack and we pulled quite a few nice ones.  The minis come in a variety of card backs with the Polar Bear back being the most common (and the only true full parallel across the entire set).  We ended up with 13 Polar Bear minis. 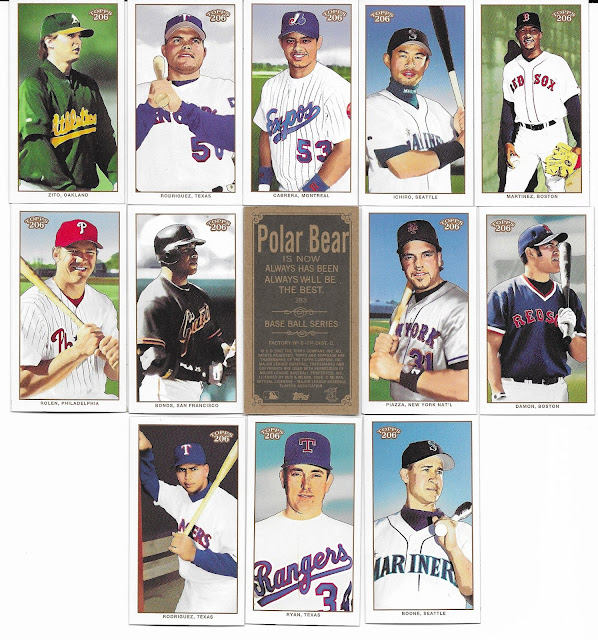 The one mini that is flipped over is Schuda of the Rays - a player I've never heard of from one of the few teams that didn't get claimed in this edition of the Breaker's Club.  I figured that was the perfect card to flip over in the scan so that you can see what the card backs looks like!

We pulled one Carolina Brights (of Doug Mientkiewicz of the Twins) mini - a type that is exclusive to Series 2. 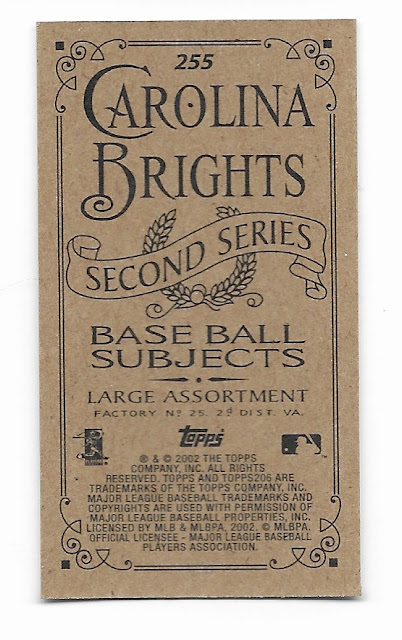 We pulled five black ink Piedmont backs - another series that is exclusive to Series 2.

If you are wondering, the card flipped over is David Wells (Yankees).

We also pulled on red ink Piedmont mini (Lance Berkman of the Astros). From what I could find, Topps printed one-quarter of the total production of the Piedmont minis in red ink rather than the usual black ink.

Finally, we end the Topps 206 box with our pair of hits...and both were quite nice! 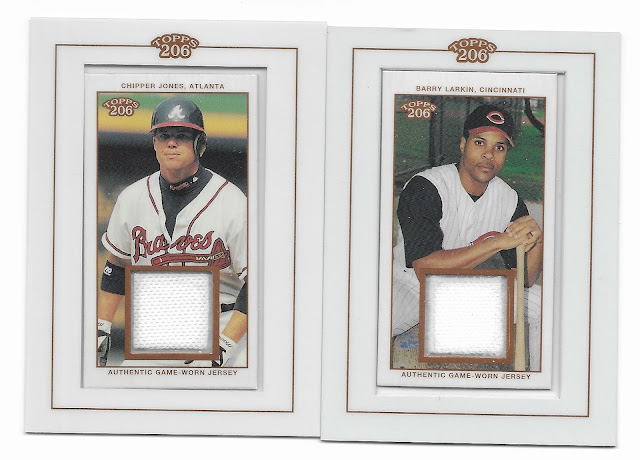 Obviously, I'm stoked to have pulled the Larkin relic but that Chipper card is also quite nice (congrats to Andy S. who has the Braves in this break)!

The final box of Tuesday's break night was a box of 2021 Topps Series 1.  This was a "regular" group break, something I hope to do on occasion in addition to the weekly Breaker's Club boxes.  Honestly, the Breaker's Club is much better for me because I only have to deal with checking payments once for a large chunk of boxes rather than for multiple boxes each week.  I think the Breaker's Club is also better for participants because they definitely get more "bang for their buck" based on the total number of boxes opened!

As I said though, this box of 2021 Topps was a regular break - and it ended up being a decent box if I do say so myself! 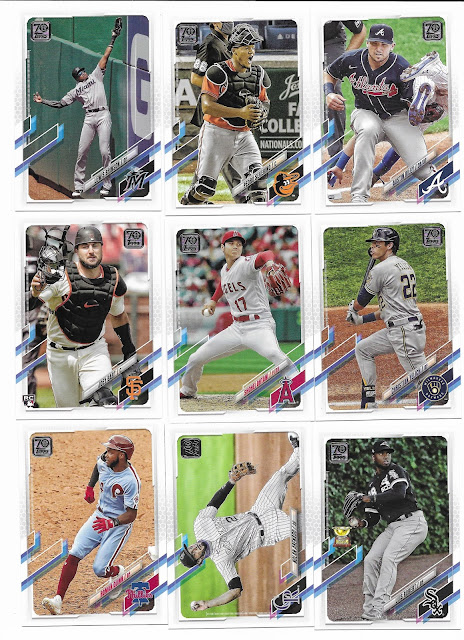 The base cards in this set are fine, but I've already made it clear on the blog (and on the video) that I think the design veers way too closely to Bowman looks for my taste.  Still, it's nice to have the solid white borders once again!

Now, let's look at the rest of the highlights from the box beginning with the four card box topper pack. 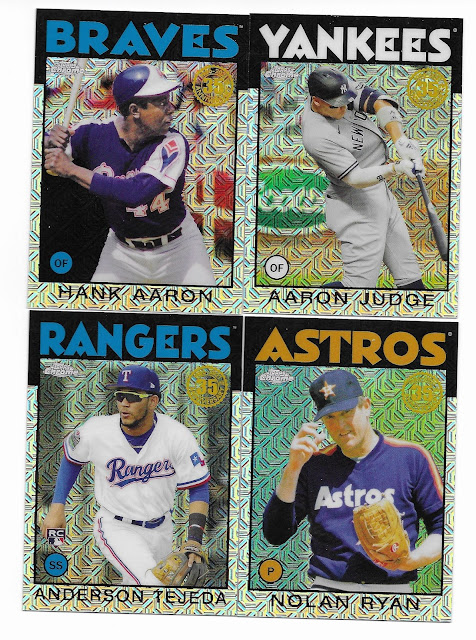 Pretty sweet Nolan Ryan and Hank Aaron cards!  There are plenty of MLB legends that I'm kind of sick of pulling in packs but finding new Hank Aaron and Nolan Ryan cards still makes me happy.

Sticking with the 1986 theme, we pulled our requisite six cards from the 1986 insert set: 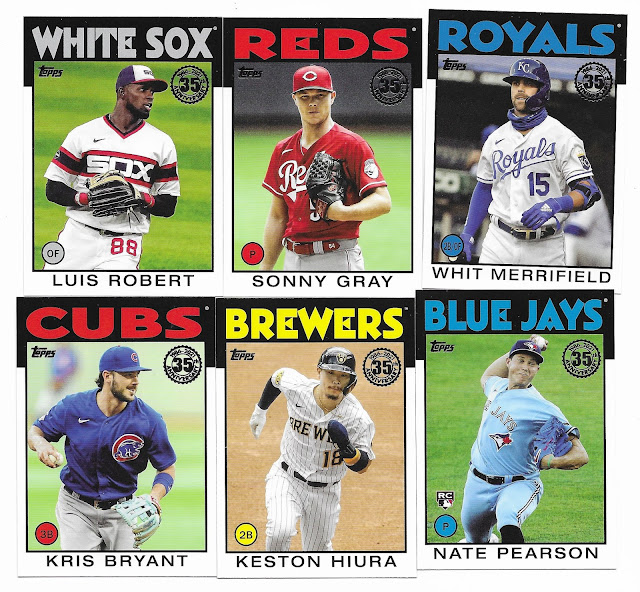 Nice to see that Luis Robert pop up - and that Sonny Gray for myself!  I don't know much about Nate Pearson but I do like the baby blue Blue Jays uniform in that photo.

The next most common insert is the 70 Years of Topps: 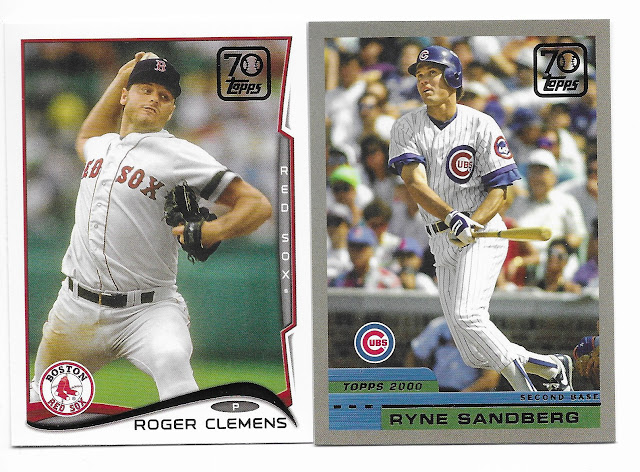 I don't have a lot to say about this particular set - it's basically a rehash of "Cards Your Mom Threw Out" and plenty of other versions of the same sort of idea...old Topps designs smashed together in a single disjointed set.  As I said before, I think I've decided that I'd prefer a single year's worth of reused retro designs (ala the 1986 set) rather than a mishmash of 70 different base designs.  On the other hand, pulling that Sandberg did make me miss the 2000 Topps set a bit - one of the more underrated Topps base sets in the last 30 years or so.

Our next insert gets its own scan since it is of the one and only Jackie Robinson. 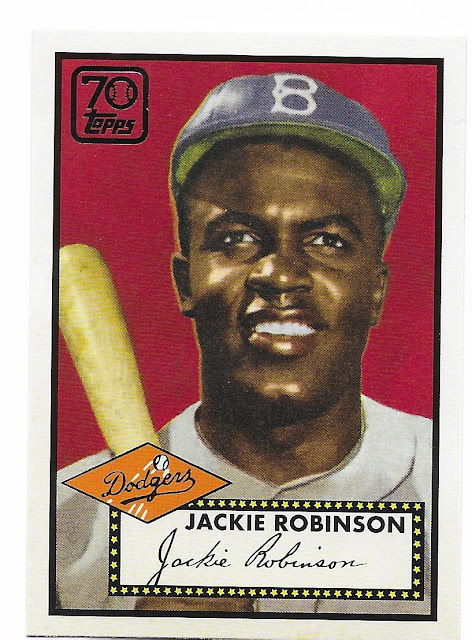 When we pulled this card live, I wasn't sure what it was but it turns out it's part of the Through the Years insert set which are seeded 1:25 packs (or just shy of one-per-box).

As usual, Topps can't help but overstuff the flagship set with tons and tons of various insert sets.  We pulled four more inserts of varying levels of interest: 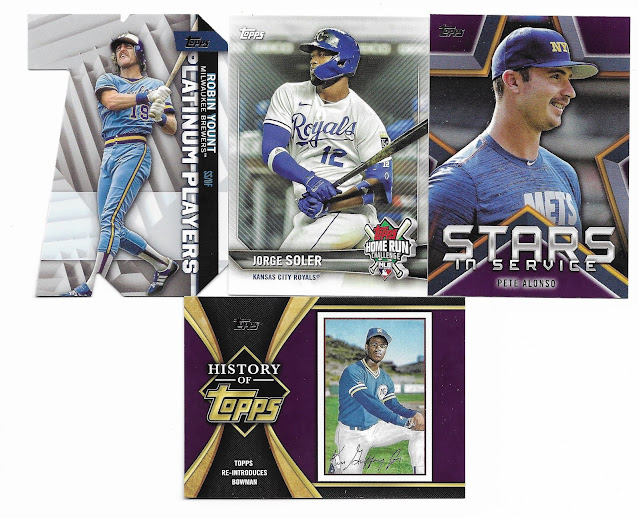 I do like the die-cut cards and if I were to pick one insert set to build this year, it might very well be that set.  The History of Topps insert goes to the non-MLB pile (claimed by Colbey H. in this break).  Lots of blue uniforms overall!

Now to the parallels - we pulled three total.

Two were of the rainbow foil variety (Gimenez and Lugo) and both went to the Mets.  The third parallel is one of the Platinum Anniversary parallels and is numbered 03/70 on the back.  The Platinum Anniversary cards are seeded 1:763 packs which was way rarer than I was expecting when I looked up the odds!  A super nice pull...but not our nicest pull of the box!

Our lone hit from the box was this 1986 relic of Vladimir Guerrero, Jr. and it's undoubtedly one of the better relics you can pull from the set. 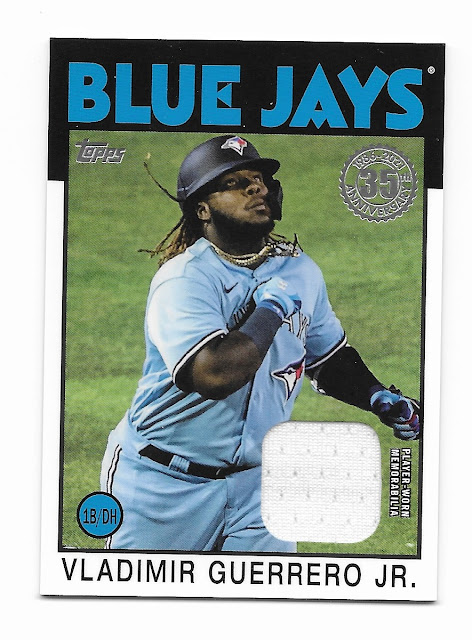 I was certainly happy with it and I think it made the box worthwhile...but if you aren't yet convinced maybe the final card from the break will make you say this box was definitely quite good: 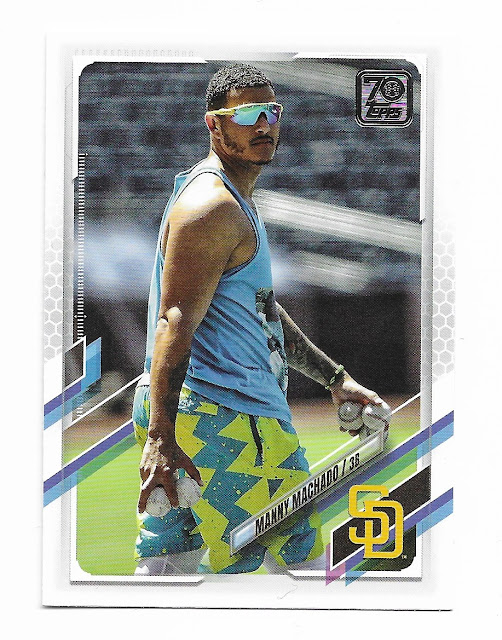 That's one of the short printed gimmick cards and it's actually quite cool!  There are three tiers of short printed cards in this year's set - this Machado is part of the first tier and is seeded 1:79 packs.

Overall, that was about as good as you can probably expect from a box of 2021 Topps Series 1!  It was a fun night of group breaks, that's for sure.  Join me next week for the next pair of boxes from the Breaker's Club series of breaks.

PS:  I will be doing a 2021 Topps Heritage group break once that set is released...consider this a friendly announcement!