I'm a bit behind on my Breaker's Club recaps - turns out that busting multiple boxes each week means a LOT of extra work in terms of sorting cards, writing about them, scanning them, etc.  However, it's all a labor of love so it'll get done in due time!

For today, we are taking a look at the final box we broke as part of the Breaker's Club evening two Tuesdays ago - a hobby exclusive box of 2000 Fleer Showcase.

I love the shiny look of the 2000 Fleer Showcase set quite a bit - the card design is top notch if you ask me.  The only downside here is that the base set is only 100 cards so you do get quite a few duplicates within the 24 pack (5 cards per pack) box.

I also happen to really like the card backs!  In fact, I like this set so much I'm definitely considering collecting the full thing for myself.  I'm not quite ready to add more sets to my want list, but this particular set is definitely on the short list of potential "new" sets for me to chase after.

Moving on from the base cards, we also pulled a fair number of inserts.  As with most late 90s, early 00s Fleer products, the inserts were mostly a lot of fun!

The most common of the inserts is the Consummate Prose set (seeded 1:6 packs). 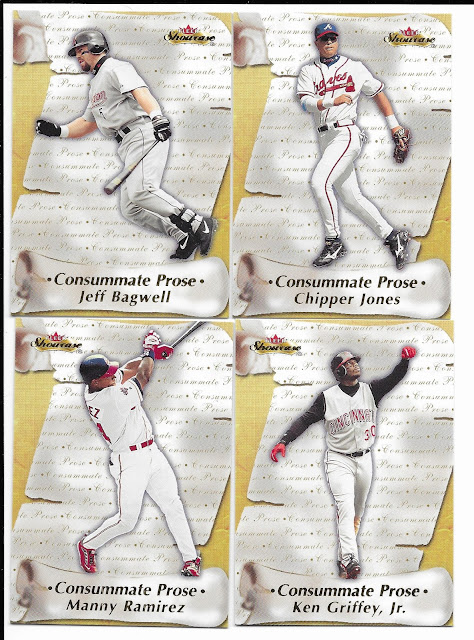 Obviously, I was happy to land the Griffey but all four the Consummate Prose cards are good looking.  I like the scroll motif - not something you normally see on baseball cards!

Next, at 1:10 packs comes the Noise of Summer set: 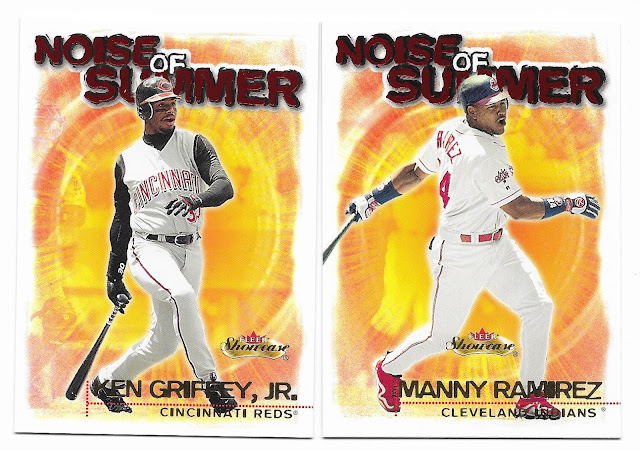 My second new Griffey in as many insert sets, not bad at all!  Honestly though, these are probably my least favorite designs out of the insert sets we pulled from the box. 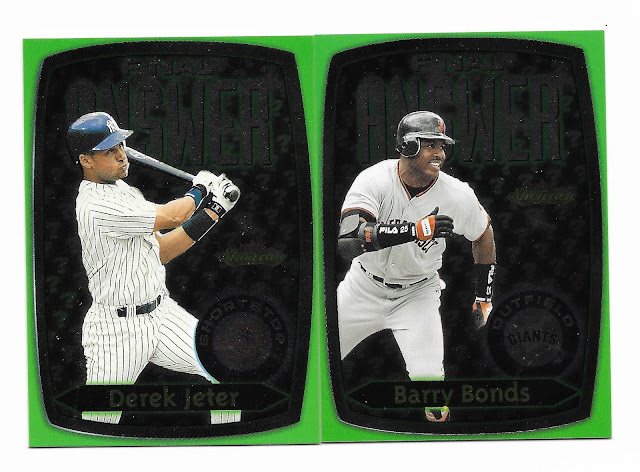 These cards have four trivia questions on the back - definitely a "Who Wants to be a Millionaire" kind of insert set which is perfect for that era.  The cards are goofy (but in a good way) and I think that makes this my favorite of the insert sets!  I should note here that the cards look MUCH better in person as compared to how they scanned for me.

Finally, at 1:20 packs we ended up pulling two of the License to Skill cards. 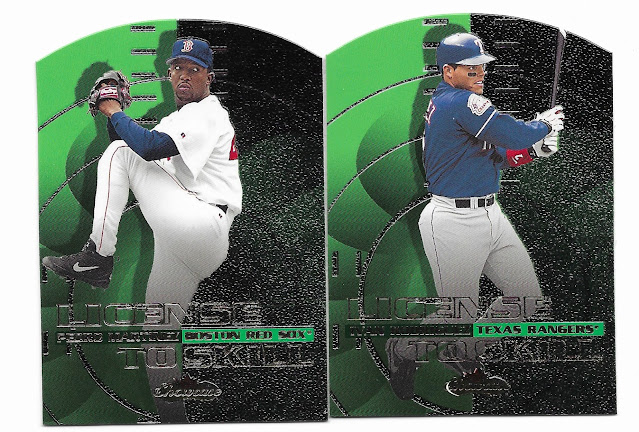 I always enjoy a bit of die-cutting on my baseball cards even if this particular set isn't overly inspiring in terms of its die-cut design.

Moving on to serially numbered cards, we found a pair of Prospect Showcase cards (each #/2000). 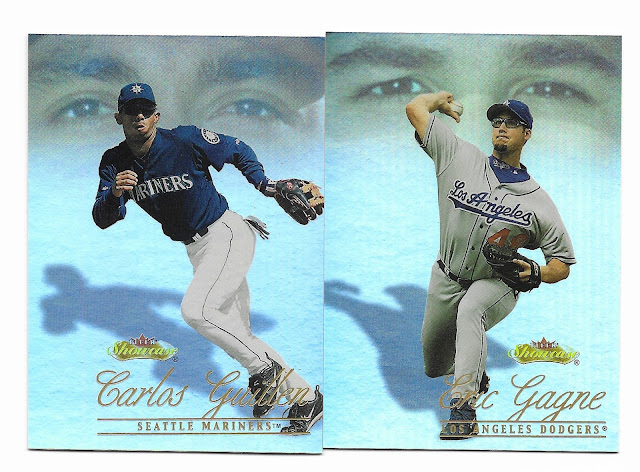 We also found one of the Prospect Showcase Firsts cards which are numbered out of only 500. 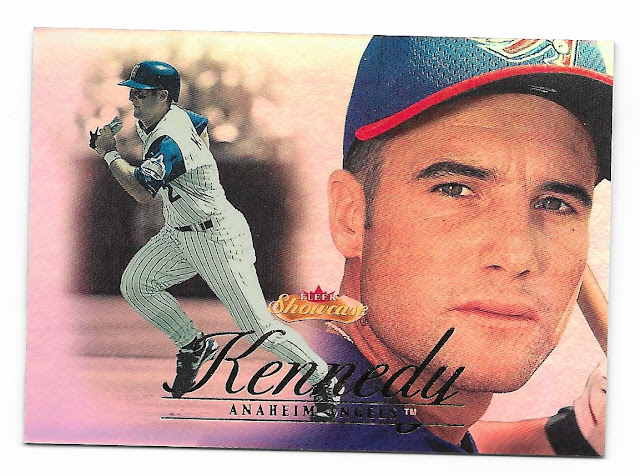 These are technically inserts despite the nearly same name as the serially numbered base cards from above.  *shrug*  At least you get the full player's face rather than just creepy eyes.  The Kennedy is #446/500.

Finally, the box promises one Fresh Ink autograph (1:24 packs) but we did better than that by pulling two autographs: 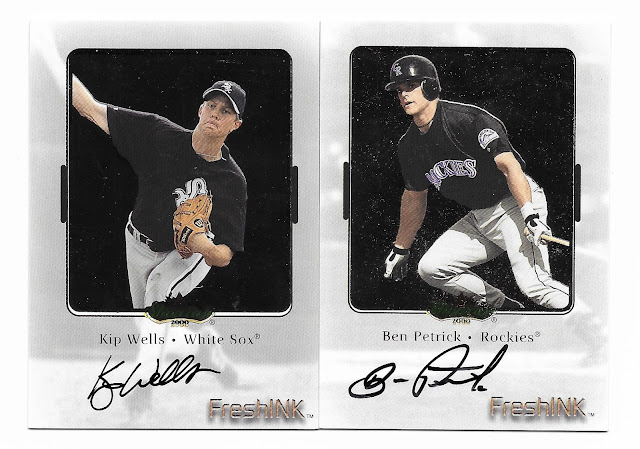 Both autographs would have been decent pulls back in 2000 I think - and I do appreciate that both are on card signatures.

Normally, that'd be enough out of a box like this but we found one more card I need to show off - a 1:72 pack relic card of none other than Cal Ripken, Jr.! 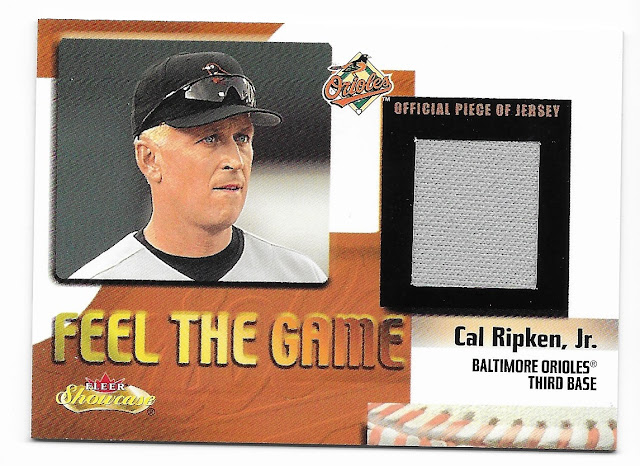 Love, love, love getting a Ripken, Jr. relic in a box of 20+ year old baseball cards!

That does it for the 2000 Fleer Showcase - a rousing success of a box if you ask me.  This was certainly a fun rip and I'd love to get another box of this stuff sometime (though as I said above, I'd be tempted to rip the next box all for myself)!