The year 2021 is quickly shaping up to be the year of the completed set!  After all, April isn't even over quite yet and I've already knocked 15 sets off of my want list (with a bunch more that will be completed soon)!  There's a very real chance that I could be pushing 30 complete sets for the year by the time December rolls around - and as a set collector that's an awesome possibility!

One set that I probably won't have finished is the incredibly elusive 2010 Topps Allen & Ginter framed relic set.  This set has a bunch of short (and super short) printed relic cards - and they simply don't show up for sale/trade much at all anymore.  That said, every now and then one does show up - and if I'm lucky enough to see it, I try to pounce! 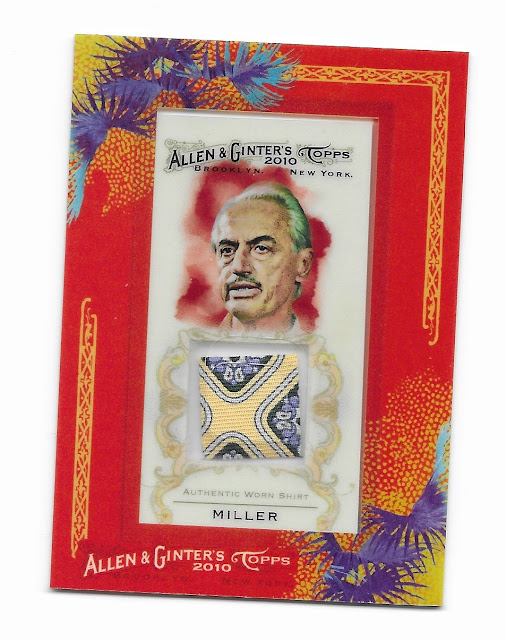 Case in point:  A few weeks ago, a Marvin Miller relic was listed on eBay - the first time I had seen this relic listed in quite some time.  I ended up (probably) over paying for the card a bit but seeing as how close I am to finishing the set I figured it was worth it.  Plus, isn't the relic bit glorious?  One of the best things about the 2010 framed relic set is that sheer variety of relic bits included, especially among the non-baseball player subjects.

For the record, here's what I'm still actively searching for from the relic set:

Only 7 more cards to track down but they simply don't come up for sale very often anymore (probably because the set is over a decade old at this point).  If you have a lead on any of the above relics, please let me know as I'd love to add the 2010 relic set to my list of completed sets for 2021!