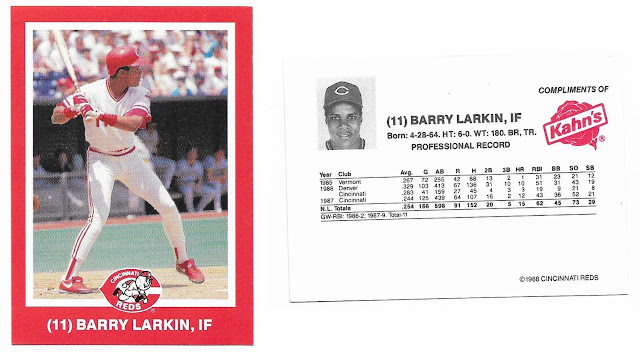 Kahn's cards are fixture for any collector who collects Cincinnati Reds players.  Kahn's has produced a set of trading cards (as a stadium giveaway) for many, many years and as such, I've been actively trying to track down the various Barry Larkin Kahn's cards that I still don't own!

This particular card is definitely rudimentary in terms of design and overall appeal.  That said, I kind of like it despite its many flaws - the bright red border, the large team logo, the somewhat unique angle of the photo...it all adds up to a card that's definitely greater than the sum of its parts.  That being said, the back of the card could use a quite a bit of work...it kind of looks like a page torn from a magazine and then slapped with a bright red Kahn's logo.