My 2nd ever Breaker's Club is officially in the books and I'm rapidly putting a bow on the entire thing by getting the last few Box Recap posts completed (and with that, the cards from each box sorted into the team stacks).  In terms of raw numbers of cards, this ended up being a HUGE break - and we aren't done yet as I have three more boxes that I need to recap.  Thus, let's get right to it by talking about two of the final three boxes.

We busted a box of 2021 Topps Opening Day.  I decided not to scan all of the inserts (36 total - one per pack) but I will show off the shiny blue parallels since those are pretty sweet looking! 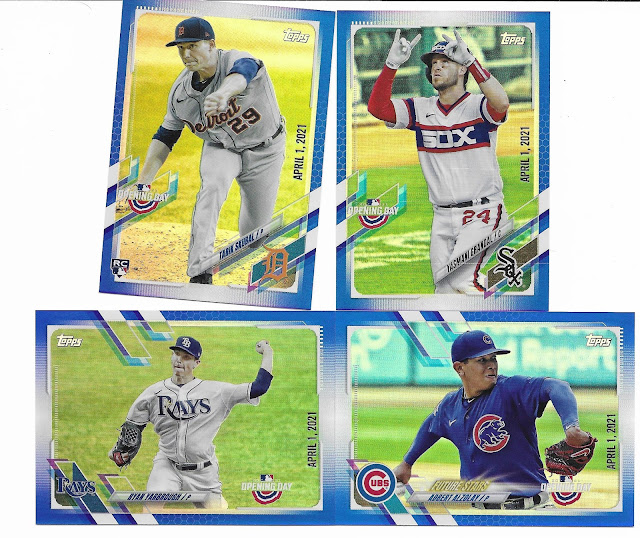 Out of the four parallels in the box, I think my favorite has to be the Grandal.  I love the look of the "old school" jersey and pants (notice the jersey number on the pant leg)!

Next up, a box that proved to be extremely popular (for good reason):  2003 Donruss Studio.

We'll start with a smattering of the base cards - as you can see you get a posed shot with a "green screen" team stadium background. 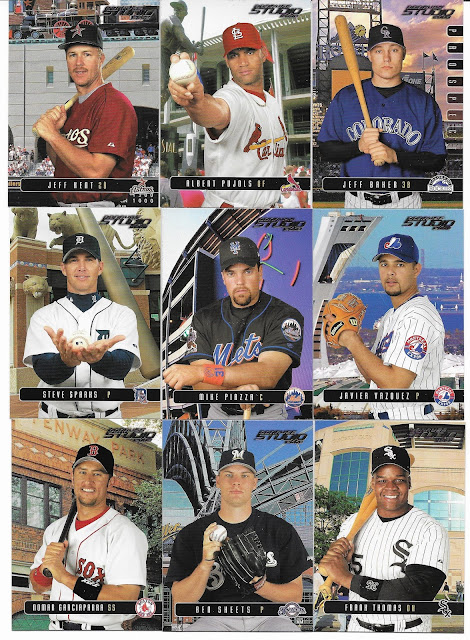 I love the simplicity of the base set and the colors are tremendous (even the backs are colorful with team specific colors used).  Of course, as nice as the base set is the real draw here is the inserts, parallels, and hits so let's get to it!

First up, the Studio Proof parallels. 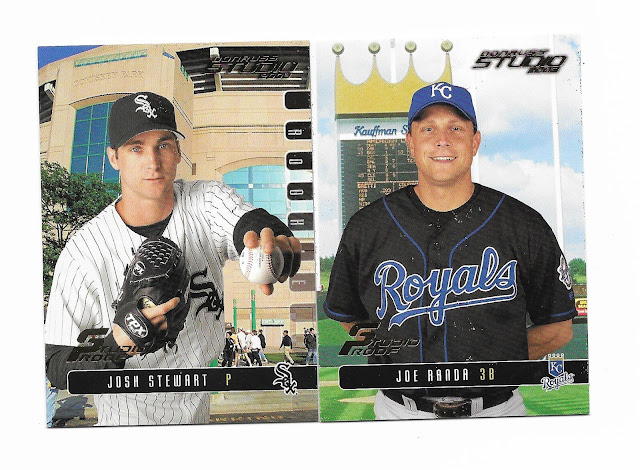 Moving on to the inserts, let's start with the awesome acetate "Studio Stars" set. 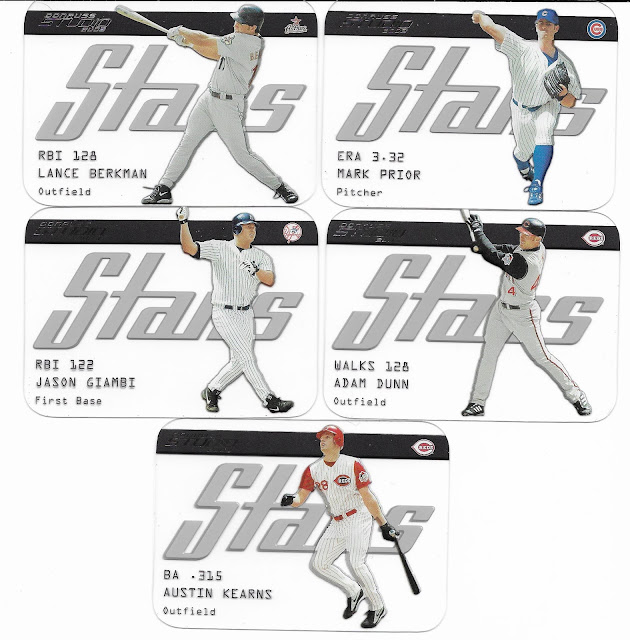 This "clear credit card looking" set is one of my favorites.  It's a simple design but it harkens back to early 90s Studio sets that also had the credit card motif going on.

Next, we found a single Masterstrokes insert of Magglio Ordonez. 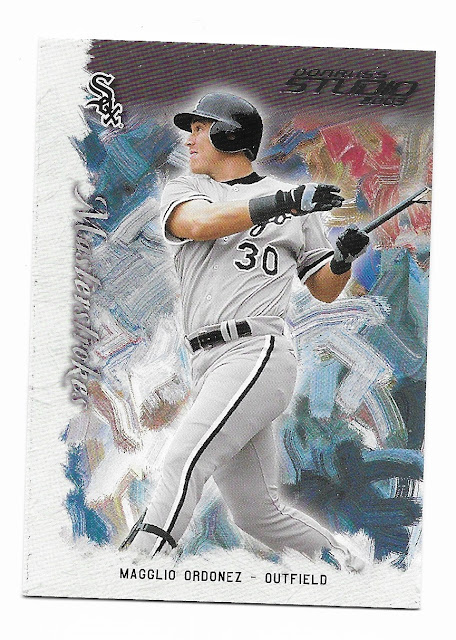 The Ordonez is numbered 0632/1000 on the back.  The art theme is kind of cool but I don't feel like it necessarily belongs in this particular edition of Studio (which clearly has a "photography studio" vibe about it).

Our next insert is another serially numbered one, this time out of only 400. 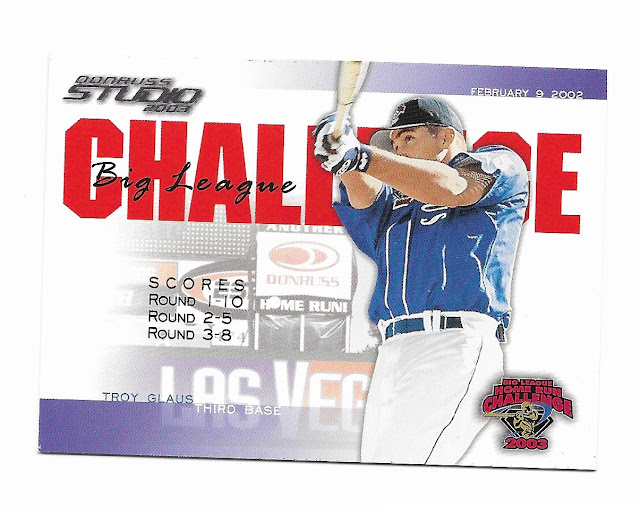 That's a Big League Challenge insert of Troy Glaus #112/400.   I don't have much else to say about these cards - cool if you get one of a player you collect but otherwise definitely not my favorite set idea.

Moving right along, next up is the Spirit of the Game inserts - each numbered out of 1250. 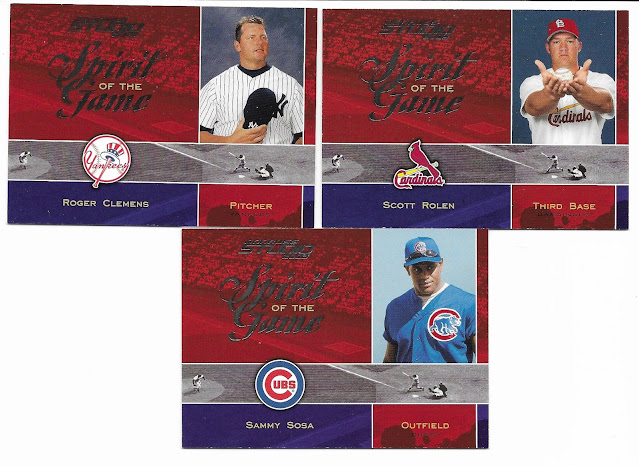 And finally, last but not least on the insert front is the Enshrinement set.

The Brooks Robinson is #668/750 while the Pee Wee Reese is #628/750.  These are definitely classy inserts though building the full set would probably prove to be fairly difficult given that they are all serially numbered!

For a normal box, the above cards would probably be enough to say it was a fun box rip...but 2003 Studio isn't done yet.  Not by a long shot!  Our box produced EIGHT different hits - so let's take a look at those too.

Let's start with the FOUR Big League Challenge Materials relics in our box. 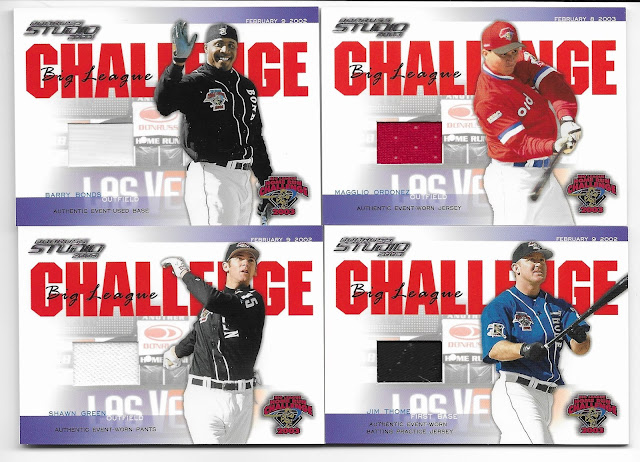 Team names aren't listed on the cards so as discussed during the live video break, I'm going with TCDB's listed teams.  Thus, we've got:

I like the variety of relic bits here - event worn jersey for Ordonez, batting practice jersey for Thome, event-used base for Bonds, and event-worn pants for Green.

Next, we pulled a trio of Player Collection relics, all of which are numbered out of 300. 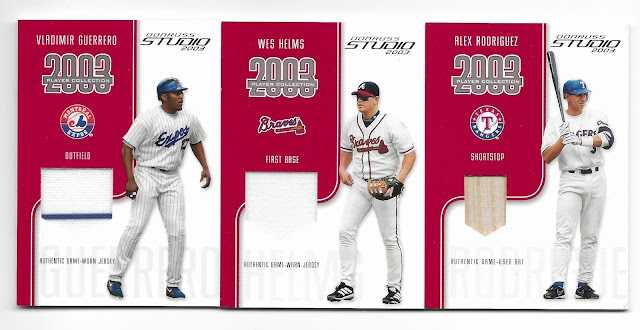 And finally, we pulled one autograph but it's a good one! 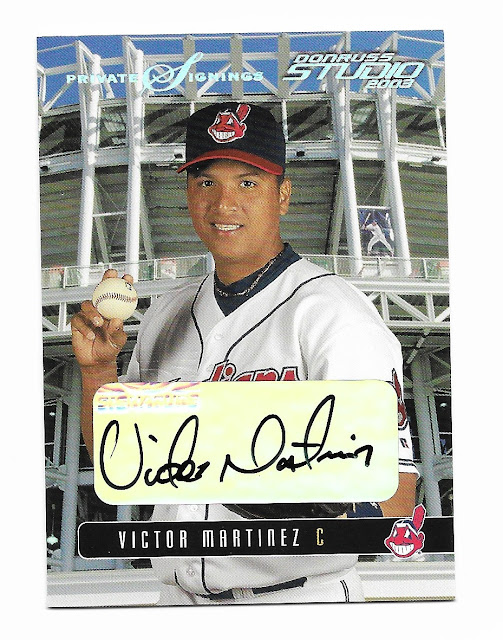 That's Victor Martinez with an autograph #141/200.  Good stuff for the Indians and a great way to end this box!!

Overall, the 2003 Donruss Studio box was a LOT of fun to rip.  As a group break host, I love that tons of different teams ended up with something good!  This probably won't be the last time you see me rip a box of this during a future Breaker's Club (especially since some in the live chat requested I track down another box of the stuff)!