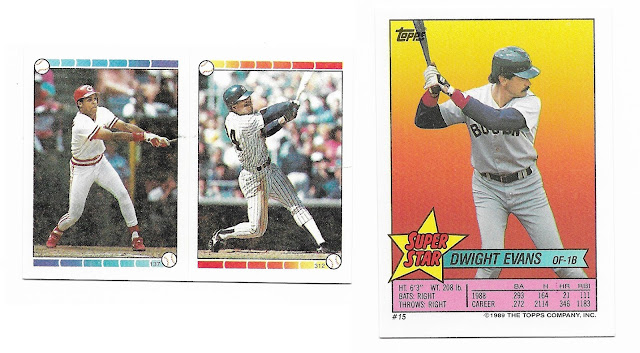 Barry Larkin has 14 different variations in the 1989 Topps Stickers set (that I know of).  Out of the 14, 12 feature Barry on the "card side" while only two variations include Barry as a proper sticker.  This is the first of the two sticker versions of Barry!
On this card, Barry is paired with Rickey Henderson on the sticker side while Dwight Evans gets the card treatment on the back.  It's worth noting that Barry's sticker number (137) is different than Barry's card number (44) in the set.  For my personal Barry Larkin binder organization, I consider the card number of this particular card to be #137 (since I'm only focused on Barry)!
One more card from this set to show off and then I can finally move on to some other sets!  Fourteen variations is a silly amount of cards to track down from a set that's over 30 years old!
Barry Larkin Larkin Collection Topps Stickers 1989