on June 23, 2021
Before beginning Breaker's Club #3, I solicited feedback for which sets people might want to see included.  One of the big winners of that vote was for me to include another box of 2003 Donruss Studio.  I imagine the main reason for that is that in Breaker's Club #2 we busted a box of '03 Studio and pulled a whopping EIGHT hits out of it (see that recap here).  I had actually forgotten that way back in 2012 I busted another box of 2003 Donruss Studio (recap here).  That particular box held three hits...so I still have no idea what a typical box should hold in terms of hits.  Let's see how our most recent box made out!
Before getting to the hits, here's a quick look at some of the other cards of note from the box.
We pulled four of the Studio Stars inserts. 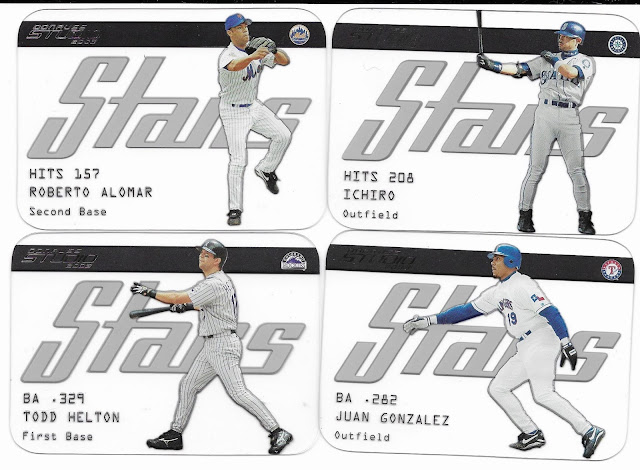 These are pretty cool since they are see through and basically look like a baseball card branded credit card.  Plenty of star power in this particular insert set!  The Studio Stars cards are not serially numbered but all of our other inserts were!
Let's start with a pair of Spirit of the Game cards, each numbered out of 1250.

The teams who wear red made out well here with this insert set, especially since the predominant color of the set's design is red!
Next, a pair of Enshrinement cards, each numbered out of 750.

I still get excited pulling a rare Nolan Ryan card from a pack - and the Enshrinement set in general is pretty nice looking!  Also, nice to see the Brewers get in on the action here - love when the "little guy" gets involved in a group break!
For inserts of which we only found a single card, let's begin with this Jason Giambi "Masterstrokes" card which is numbered out of 1000. 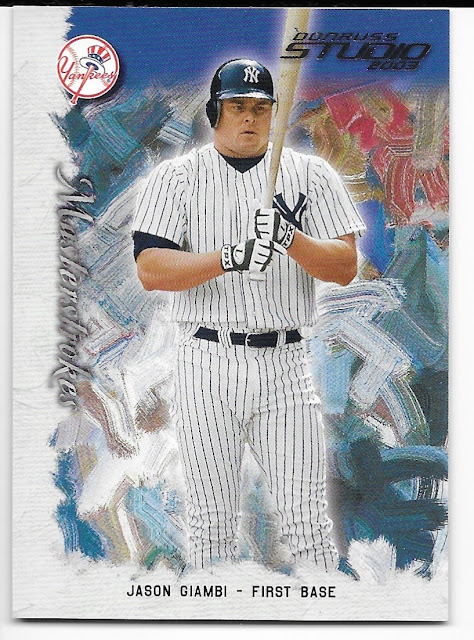 To me, that card is what Topps Gallery ought to look like!
Next, a single Big League Challenge card of Barry Bonds (numbered out of only 400). 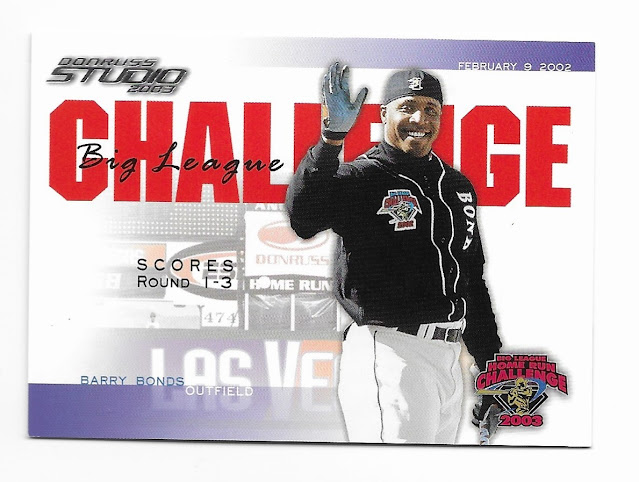 I feel like there aren't a ton of Barry Bonds cards out there where he is flashing a huge grin...couple that with the relatively low serially numbering of only 400 copies and I think you've got yourself a winner of a card here for the Giants!
And last, but certainly not least, our lone parallel of the box: 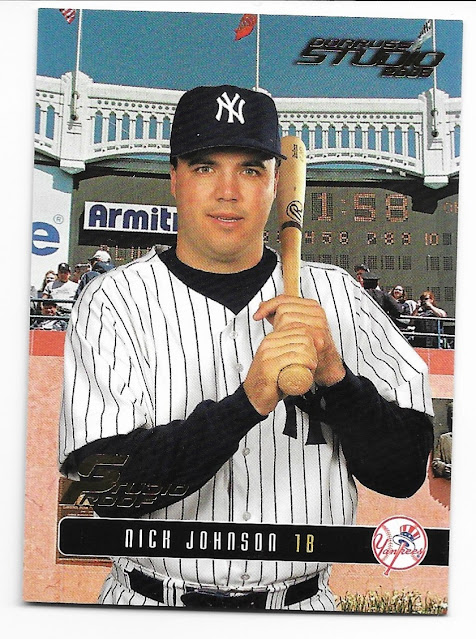 That's a Studio Proof card of Nick Johnson and it's numbered out of a mere 100 copies!
Now, turning our attention to the hits of the box.  We ended up with a total of three hits - and we'll begin with this Big League Challenge relic of Albert Pujols. 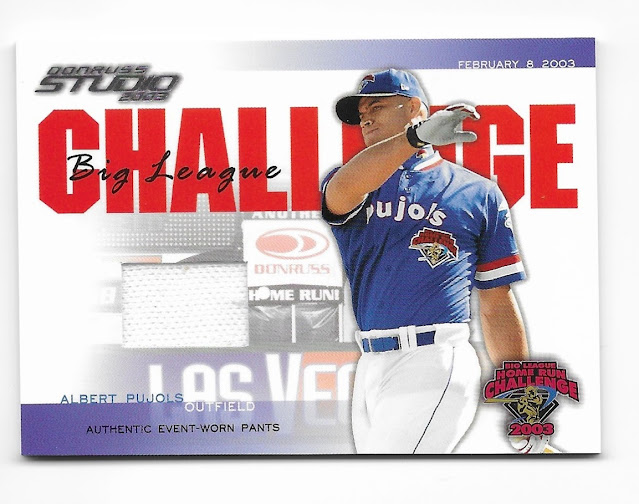 I had to look up Pujols' team assignment here but according to TCDB this card will go to the St. Louis Cardinals (so congrats to Kerry on this one)!
Next, a super nice Jeff Bagwell relic for the Astros. 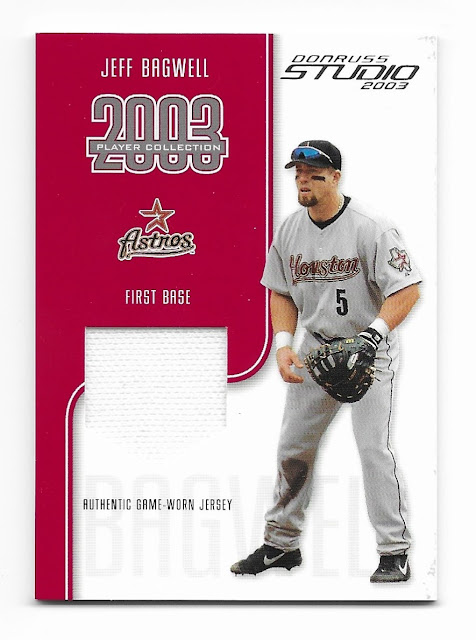 This one is numbered 151/300.  My only regret about this particular card is that the Astros went unclaimed this time around.  Hopefully when we get to Breaker's Club #4 there won't be any unclaimed teams!  And speaking of Breaker's Club #4, check out last week's group break video for a sneak preview of SIX different boxes that will be included (including THREE boxes from various 2021 products)!  Trust me, you won't want to miss the next Breaker's Club!
And finally, the last hit of the box is a gorgeous Leather and Lumber relic of Mike Piazza of the New York Mets. 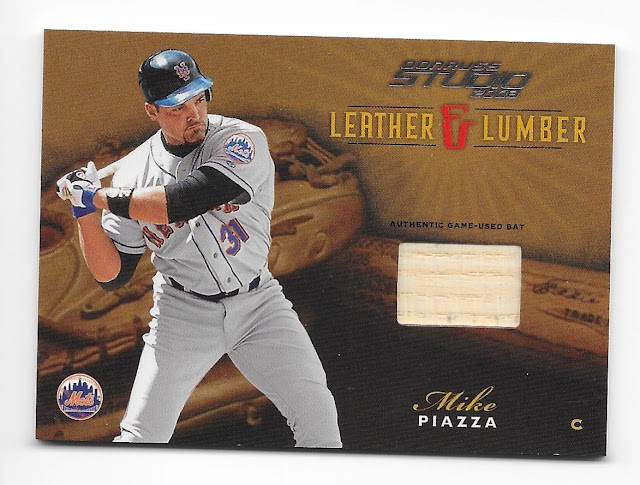 This one is numbered 28/400 and, in my opinion, is one of the nicest looking relic designs that I've seen in quite some time!
Overall, I thought this was a solid box despite not producing a whopping eight hits like the last one (which had to be some sort of packaging error on Donruss' part, right?!).  We ended up with a great mix of player (and teams) plus a bunch of nice base cards.  Turn of the century Donruss stuff is certainly fun to rip for group breaks, you definitely never know for sure what you might end up with!
Donruss Studio 2003 Nachos Grande Breakers Club