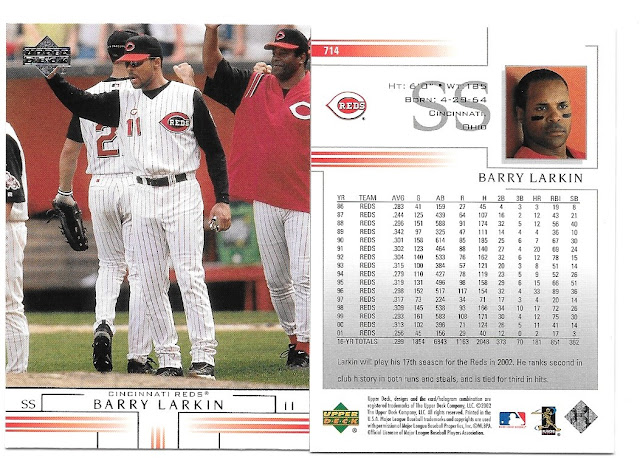 The 2002 Upper Deck set featured some team specific coloring and full career statistics, two things that Upper Deck hadn't done a lot of up through 2002.  For that reason alone, I kind of like the 2002 Upper Deck base set.  I also happen to like the photo choice for Larkin's card.  Barry is front and center but you can see a nice little celebration parade of Reds in the background.  The backside of the card isn't overly exciting but there's just enough color with the red stripes to keep me interested.

Besides the base card, Barry is also part of the UD Plus insert set (both retail #/1125 and hobby #/1125).  Barry was also featured in the Championship Caliber Swatch relic set.  Unfortunately for me, I don't own any of the rarer Larkin cards from 2002 Upper Deck but perhaps someday I'll be able to track them down.
Barry Larkin Larkin Collection Upper Deck 2002