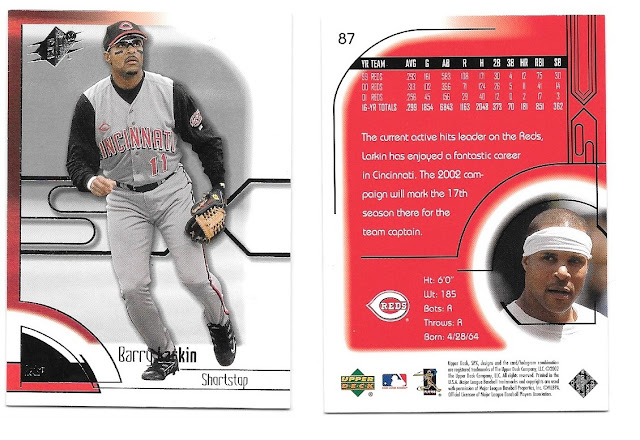 The Upper Deck SPx brand was never something that I saw as a kid, I presume it was priced (and/or available) outside of my normal card buying retail establishments (CVS and Walmart at that time).  Based on this particular card at least, I don't think I missed much.  The front is classic "lazy Upper Deck" of the era...and for as much as people today like to say they wished Upper Deck was making baseball cards, I'd always offer up a plethora of sets like this uninspiring SPx set as counterpoints to the argument that only Topps is a lazy card set designer.

Anyhow, I digress.  Other than complaining about the card design (and it's quite bad), there isn't much else to say.  Well, one more thing:  why does it look like Barry is a tennis player in that little photograph on the back of the card?  At least the write-up on the back is interesting despite being so short.
Barry Larkin Larkin Collection Upper Deck SPx 2002