Delivery Time! Puig Takes on All of the Pirates! (njwv edition)

on January 11, 2020
My Season of Giving is nearly complete though I do still have another eight people on my list that I hope to get a package out to before long.  That said, I've already mailed out 20 or so Season of Giving packages and now a few notes of thanks are returning to my mailbox.

For today, it's a small PWE from Nick over at njwv.  I sent Nick a rather large batch of Giants (plus a nifty Giants pennant that I didn't have any more room for in my collection).  You can read all about what I sent Nick on his blog where he did a nice write-up last month.

Nick sent me a nice custom of Yasiel Puig from the game where he tried to fight the entire Pittsburgh Pirates' team at once. 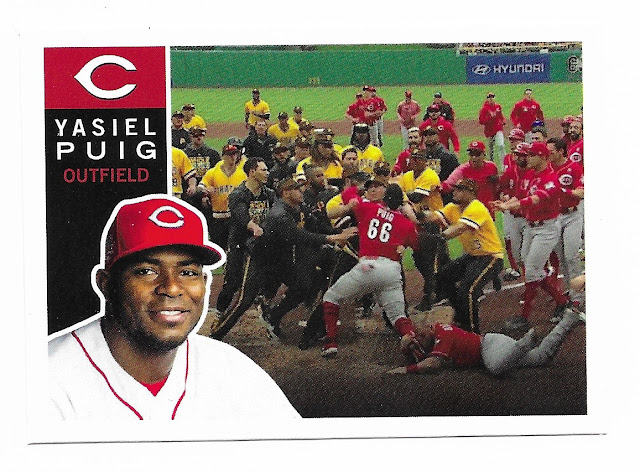 I admire Puig for his sense of team and his commitment to Cincinnati, even if the Reds did ship him off to Cleveland in the middle of the season.

Thanks for the card, Nick (and thanks for the nice write-up on what I sent you as well, I hope your boys enjoyed the banner)!