on January 19, 2020
I spent most of 2019 talking about completing sets that have been languishing on my want list for years and years.  I ended up being quite successful by the end of the year, so much so that my want list is now down to under 100 sets.

Of course, 100 sets is still rather insane so one of this year's goals is to further whittle the list down by another ten sets or so.

Today's purchase from eBay doesn't actually knock a set off of my want list but it does inch me a tiny bit closer to completing one of the more challenging sets that I've ever attempted to build:  the 2010 Topps Allen & Ginter relic set. 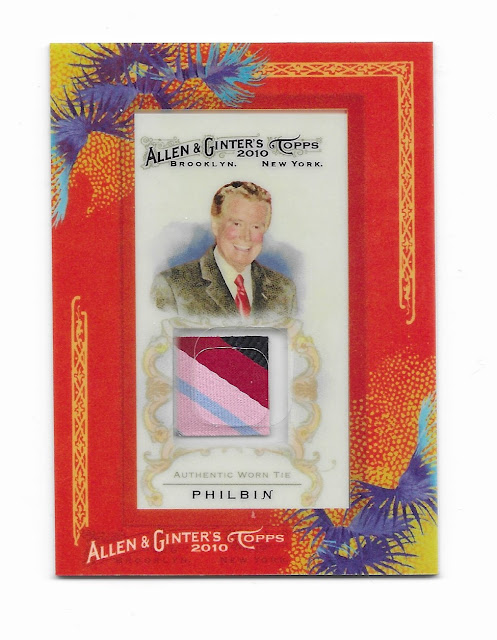 That's Regis Philbin with a nice, multi-colored bit of his tie in the relic.  The 2010 Ginter relic set is notable to me because there are plenty of "different" relics in the set rather than just your usual bat or pant bit.

At this point, I'm only missing the following nineteen relics from the set (so if you have any for trade, please let me know)!


It feels good to inch ever closer to completing the set!  Hopefully, in future posts this year you'll see even more 2010 Ginter relics show up.
Allen and Ginter 2010 eBay