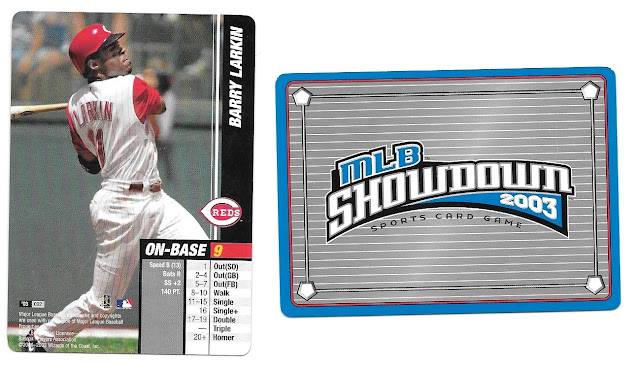 The MLB Showdown set was actually a game with collectible trading cards.  Everything was licensed (so you get proper team logos) and the card designs were professionally done.  Heck, even the game itself wasn't bad - I spent the better part of a summer playing it with my younger brother back in the day and it was fun enough.

Because the card is part of a game, the back of the card is simply the name of the game (plus the year).  The front of the card is where you get a nice photo of Barry plus his "results" that are all based on the roll of a twenty-sided die (or a D20 for you DnD fans out there).  Aside:  Did you know that I'm a huge gamer but that I've never played a proper DnD quest?

There's not a whole lot else to say about the card design.  I'd actually enjoy opening up a box of this stuff sometime since it's kind of fun to put together team rosters.  Larkin surely doesn't provide all that much power (no way for him to hit a triple and homers only happen on rolls of 20 or higher).  You'll notice that it does say 20+, that's because there are action cards that let you modify die results such as adding 2 to a hitter's roll or something along those lines.  Like I said, it's a fun enough little game and probably the perfect thing to do while everyone is stuck inside because of Covid-19!
Barry Larkin Larkin Collection MLB Showdown 2003