Our second group break involving 2020 Topps Stadium Club concluded this past Friday evening.  For my money, box #2 ended up being a bit better than box #1 (which was still a great box).  Of course, you can be the judge of that since I've already written about box #1 here. For today though, we move our attention to box #2.

As usual with Stadium Club, the base cards are the main draw.  I believe that this year's edition of Stadium Club has one of the nicest crop of photos throughout the entire set.  There are very few truly dull cards and there are a ton of cards that really seem to pop. 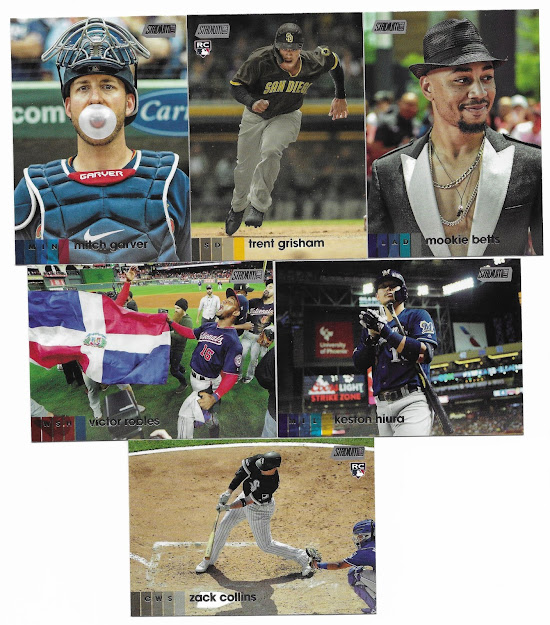 The above cards are some of my favorite base cards from this box though I easily could have picked seven or eight others to scan as well.  Lots of rookie cards in the 2020 Stadium Club set, many of which are sweet shots like the Grisham and Collins.
While the base cards are certainly the draw, there are plenty of other cool cards inserted into this year's Stadium Club boxes including oversized box toppers! 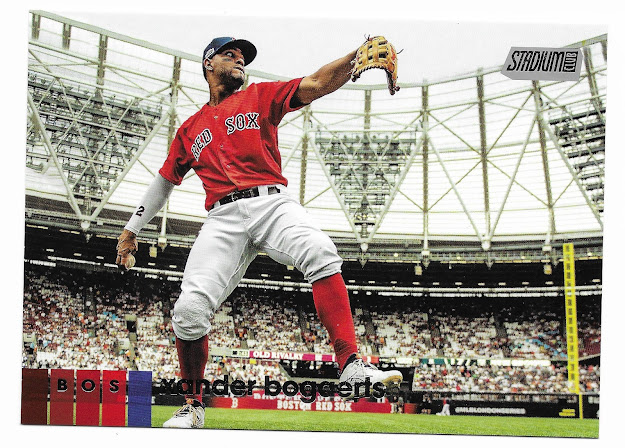 That's a gorgeous shot of Bogaerts and a nice "consolation" prize for Kerry who ended up with the Red Sox as his "random" team.  I don't know what happened to all of the Boston collectors...it seems like most of my group breaks are having Boston going unclaimed which is surprising since the Red Sox still seem to have plenty of cards in most modern sets?!  I don't get it but it seemed to work out for Kerry!
Moving on to the inserts.  We pulled exactly what you'd expect to pull based on pack odds for each of the main insert sets.  We had a pair of Bash & Burn cards: 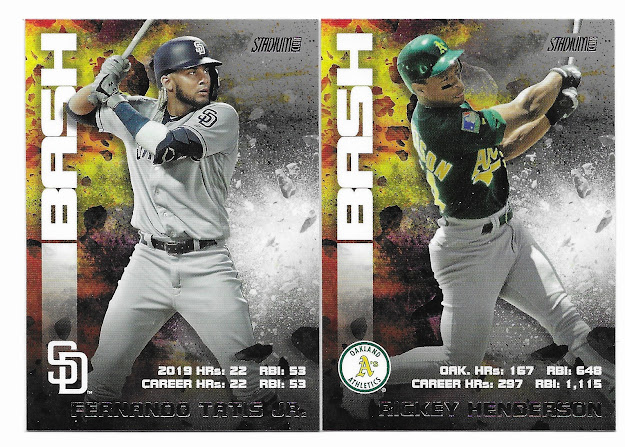 I think that particular insert set is my favorite from the 2020 Stadium Club set.  Of course, it didn't hurt that one of our cards was of Rickey Henderson!
The other insert sets I could probably do without, if I'm being honest.  Of course, I'll immediately contradict myself since I was happy to get this Aristides Aquino rookie "In the Wings" card for my personal collection. 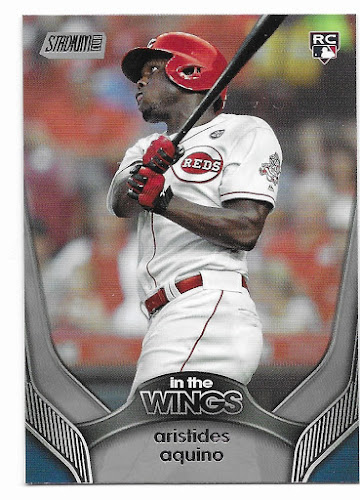 While I'm glad to have the above card, being objective it's a really boring card design!
The last two main insert sets both look like they were designed with the potential of relics being included (but obviously that never happened since Stadium Club doesn't feature relics this year).  The first of those two sets is the Emperors of the Zone. 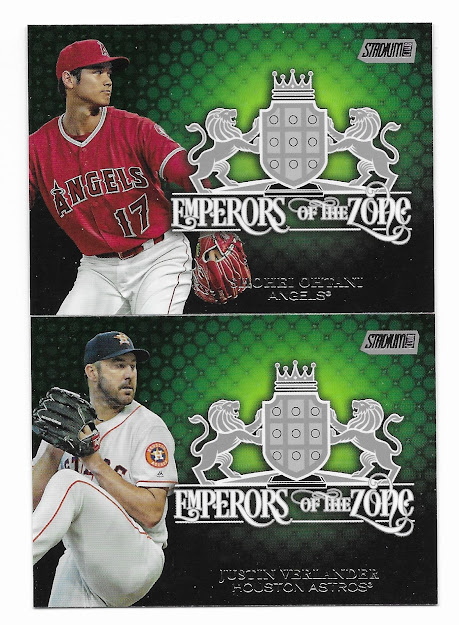 That logo is so freaking large that the card design is almost begging for a relic bit in that empty space.  Alas, no such luck - instead you get a picture of the player squashed off to the side and then a pair of meaningless lions taking up most of the card's real estate.
And finally, my least favorite insert set of this year's Stadium Club:  Power Zone. 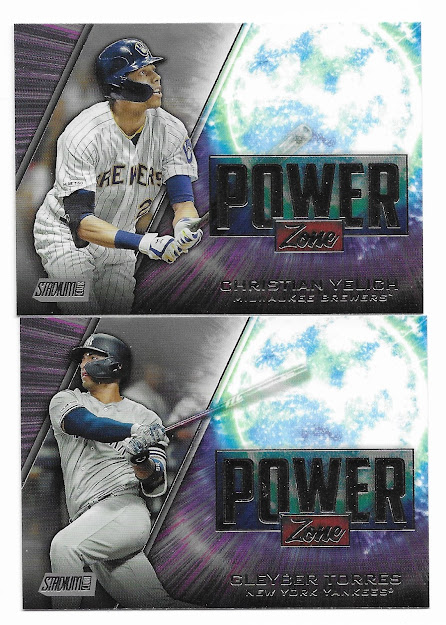 Again, too much wasted space on the card front for my tastes.  Also, you can't help but be disappointed by such boring images on most of the insert sets when the regular base cards all look so amazing!  I would actually prefer that Topps drop all of the inserts in future editions of Stadium Club and instead focus on the base set, parallels (which I do like), and autographs.
Speaking of parallels, our box was chock full of parallels...but let's start with the most common type - the red foil parallels (1:3 packs). 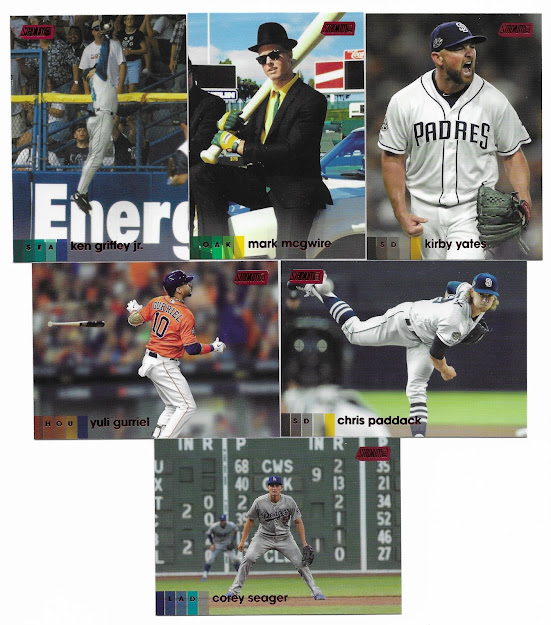 Anytime you pull a parallel of Ken Griffey, Jr. you have to be happy.  The Padres slot did well here nabbing two of the other five red parallels.
Next up, the black foil parallels which are 1:8 packs: 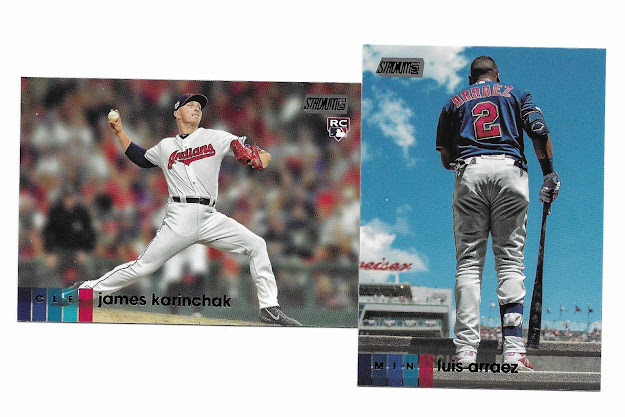 The Luis Arraez image is one of my favorites in the set so getting the black version of that is pretty cool.
While I'm guessing that Spiegel83 was happy to land the Karinchak black foil (since he claimed Atlanta in this break), his real prize was actually our next parallel - a 1:48 black and white parallel of Nick Markakis. 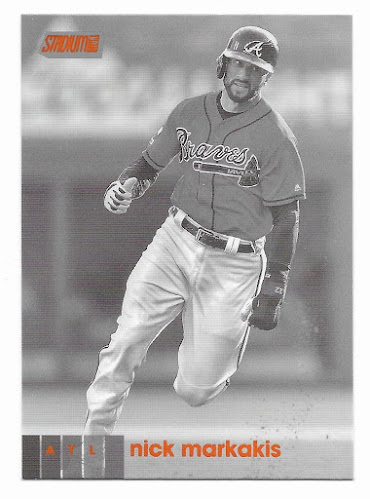 I love the orange lettering on the black and white foils.  For the past three years, I drove a bright orange car so I have a soft spot for that color (I've since switched to a grey car which is much more subdued...and much more difficult to spot in a crowded parking lot)!
We have a few more parallels to show off but I'm going to switch gears for a moment and actually show our two autographs next.
Stadium Club does have some really cool autographs possible but most boxes will simply hold a pair of rookie autos. 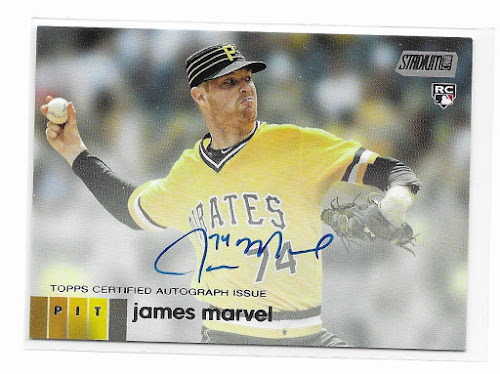 The thing with rookie autos is that they could be quite good down the road but it's often hard to get super excited in the moment since many of the subjects I know little to nothing about currently.  The James Marvel auto went to Julie as part of her "random" team since Pittsburgh went unclaimed this time around.  Our second autograph also went to a "random" team... 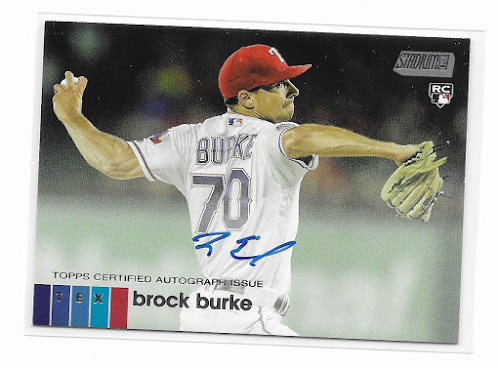 This time it was Trevor who lucked out with his second team producing a hit out of the box.
On the bright side, at least all of the autographs are on card!
Alright, now on to the coolest stuff out of this box (and it's what made this box great if you ask me).  First, our promised third box hit - a Stadium Club Chrome parallel. 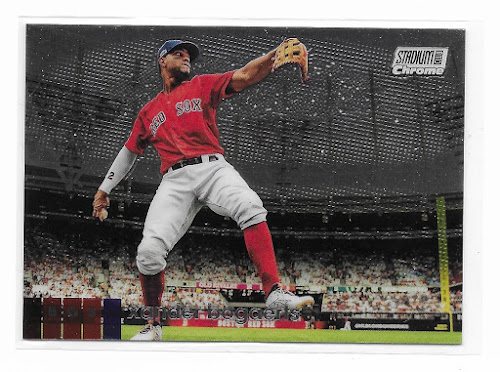 That Bogaerts should look familiar since we also pulled that card as our box topper (in a non-chrome version of course).  I had to go back and double-check the Red Sox stack just to verify that we didn't end up with a trifecta (we didn't, the regular base card of Bogaerts didn't show up in this box)!
Now to the two big hits of our box:
First, a 1:159 pack Stadium Club Chrome Orange refractor parallel of Paul Goldschmidt! 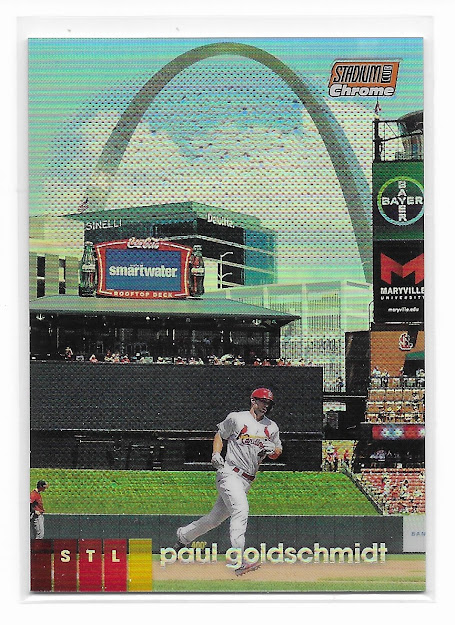 That's one of my favorite images in the entire set!  As the group break host, I was super happy to see that Kerry had claimed St. Louis since I know he'll love adding this card to his collection.  I should also mention that it's numbered 04/99 on the back of the card.
And that leaves us with what we determined during the video rip was a case hit:  a 1:256 pack Gold Minted Stadium Club Chrome parallel of Jesus Luzardo. 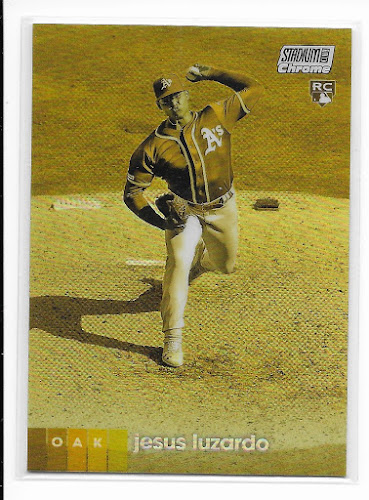 The only bad thing about this card from my perspective is that Oakland went unclaimed (Alex M. ended up with the Athletics as his random team though so I'm sure he's not complaining about this pull)!  It's also interesting to note that the Gold Minted cards are not serially numbered despite being much rarer than the Orange parallels which are serially numbered.  What can I say?  Topps is weird sometimes.
And that does it for the second 2020 Topps Stadium Club box break that I've done.  I have one more Stadium Club box that I'm ripping as part of a group break and then I'll probably be done with the set.  I had considered collecting the set myself but with the skyrocketing prices of hobby boxes now, I think I'll simply be content with having opened up three boxes (and mailing most of the cards out to other people, haha).