I've spent a number of posts going through my 2014 Topps Stadium Club binder and selecting the best card from each page.  Now, it's time for the best of the best to duke it out one-on-one style for title of "Best Card" in 2014 Stadium Club!

While I picked the best cards from each page, for the knockout round your votes will make a difference.  I'll still be casting my ballot but I will also take into consideration the group's thoughts on each particular match-up.

With that said, let's get right to it since there are a number of truly wonderful cards in the set.  This won't be an easy task!  For the purposes of the voting, I'm going to pair the cards from opposite sides of the binder (i.e. the highest #ed card in the set with the lowest #ed card, second highest # to second lowest #, etc.).  That seems random enough to me and requires the least amount of extra work on my end!

Here we go!  Remember to leave your vote in the comments for which card should win each matchup! 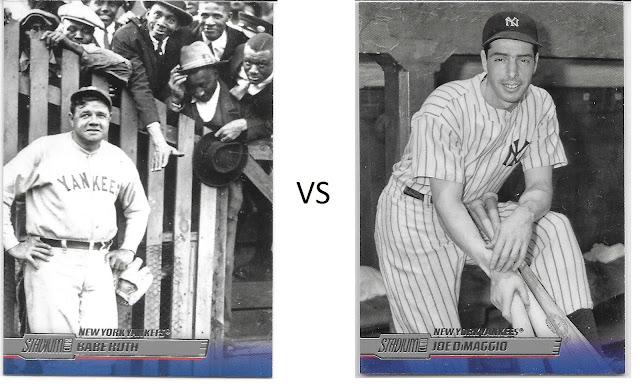 A doozy of a match-up right off the bat as a pair of black & white Yankee legends collide in the first pairing in the knockout round.  For me, as much as I'm kind of sick of Babe Ruth cards in modern sets, this particular image of Babe surrounded by a bunch of super excited fans takes the cake over the DiMaggio.  My vote goes to Ruth.

You'll notice a legend theme to this exercise because for as much as I say I don't need tons of legends in my set, the truth is that many (most?) of the best cards in 2014 Stadium Club were of the legendary player variety.  I had to vote for a Yankee in the first round (no choice there since both cards featured Yankees) and now I feel like I have to vote for a Cardinal over one of my personal favorite non-Reds in Cal Ripken.  I feel icky, but Stan Musial gets my vote since I love the shot of the catcher and the umpire looking up at Musial's drive just like Stan is.  My vote goes to Musial.

The 2014 Stadium Club set is only 200 cards in total which means you need* 24 9-pocket pages in order to store the full set.

*unless you are some kind of monster who stores their cards back-to-back in the same binder page...*cough, Night Owl, cough*

This is the toughest decision so far for me because I love both of these cards for very different reasons.  The Ortiz is a perfect snapshot in time for the year 2014 (simpler times, yes?) while the Rizzo shows so much of what is great about baseball (family game, interacting with fans, summertime, etc.).  I think before I was a father (and before the political climate turned so, so toxic) I would have picked the Ortiz but now I'm both sick of politics and much more receptive to people being nice to other people's children.  For those reasons, in what might be the first upset of the bracket from my end, my vote goes to Rizzo. 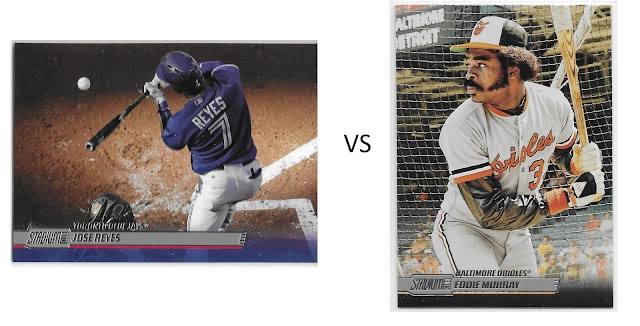 This is perspective versus side burns.  The batting cage shot of Murray is undeniably interesting but for pure eye candy, I have to pick the Reyes over-the-shoulder perspective card instead.  Plus, look at all that glorious dirt and white chalk, clearly this was a mid-game photograph.  My vote goes to Reyes.

That's the first four pairings of the knockout round!  As I said at the outset of the post, cast your votes below because I am willing to allow the group consensus to change one of my picks if that's how the tide turns.  Of course, if you don't vote you can't complain...which really ought to be the slogan for the entire month of October 2020 if you ask me.