Acquiring 20% of the 15th Seeded Best Mini Set Ever!

on July 24, 2021
Last year, I ran a huge special on the blog where I had everyone vote on the best Allen & Ginter mini set of all-time.  We went through each set in modern A&G on a year-by-year basis and then I created one huge tournament using the results from the individual years for seeding purposes.  It was during the original seeing process that the 2007 Topps Allen & Ginter World's Deadliest Snakes sewed up the 15th seed in the tournament.
Thanks to their high seed, the Snakes set earned a first round bye.  In the second round, the Snakes narrowly dispatched the World's Greatest Military Leaders (from 2012).  Unfortunately for fans of the slithering creatures, the Snakes ran into a Cinderella story in the 2015 Mythological Menaces and ended up losing 8-6 in a close match-up.
Why do I share all of this now?  Well, it's because thanks to a recent eBay purchase I was able to grab another 20% of the 2007 A&G Snake set for my own personal collection.  Of course, it's only a five-card set so when I say "20%" I really mean that I was able to creep (slither?) one card closer. 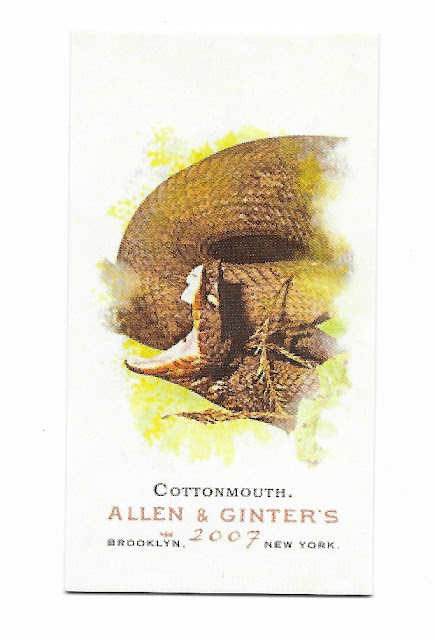 That's the Cottonmouth snake - aka Agkistrodon piscivorus.  My Snake set now stands at 80% complete - I'm only missing card S1 (Arizona Coral Snake) and then I'll have the full reptilian set done!
I have one other card to show off from the same eBay buy, though it has nothing to do with Allen & Ginter: 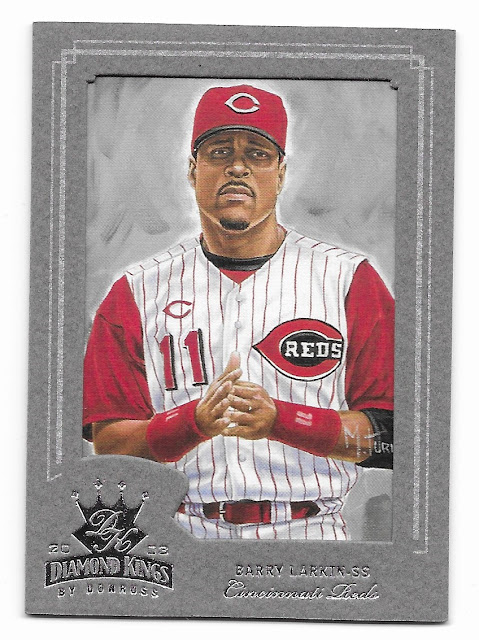 That's another Barry Larkin card that I didn't previously own.  It's from the 2003 Diamond Kings set and it's numbered out of 400 on the back.  I'll have plenty more to say about this one whenever I get around to adding it to my ongoing Barry Larkin Collection series of posts!
That does it for today, but if anyone out there is reading this and has a lead on the Arizona Coral Snake card that I still need, let me know!  I'd love to wrap up another set this year...after all, I did proclaim the year 2021 as "the year of the completed set"!
eBay