The Trades Waters are Flowing

on October 18, 2021
I don't know about the rest of you, but for me my mail has been arriving in big clumps.  I might two or three days with virtually nothing in my mail box and then "boom" all of the sudden I'll have six or seven trade envelopes arrive.
That was the story of this week - as late as Friday of this week I was thinking I'd only have two small PWE envelopes to show off from TCDB trades...and then "boom," Saturday hit and I ended up with a slew of packages in my mail box.
All's well that ends well I guess, so let's get right to it!
We'll begin with a single (tiny) card trade from user Bradmuhs: 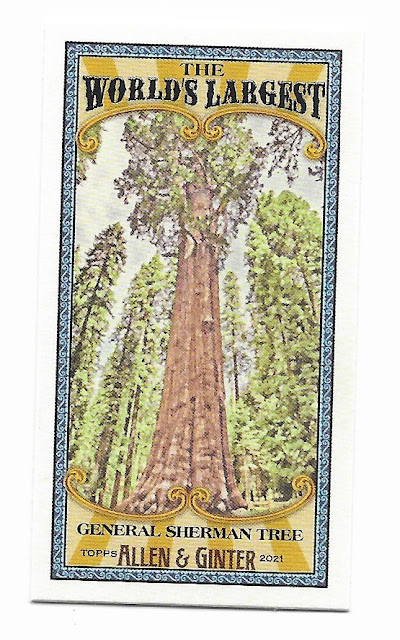 That's one of the World's Largest mini cards from this year's A&G set.  I'm still plugging away on that set (along with most of the other mini sets from this year)...here's hoping I can finish most (all?) of them off before the calendar flips to 2022.
Next, from user Lugnut80: 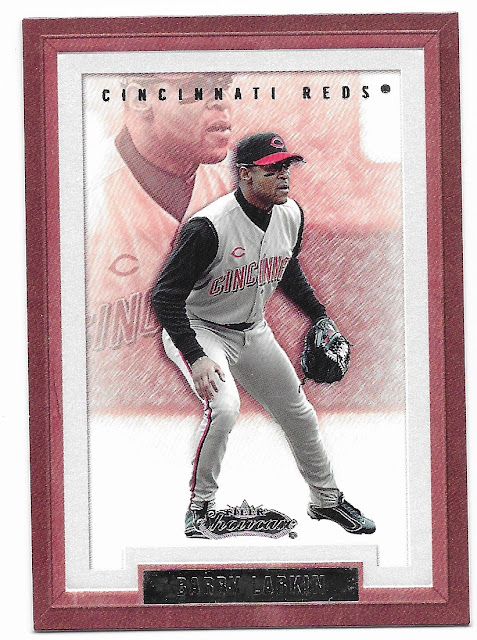 Somehow, in all of my years of collecting Barry Larkin I never ended up owning the 2002 Fleer Showcase base card of Barry.  Well, thanks to a simple swap with Lugnut80, that omission in my collection has now been remedied.
Next, from user corozco comes another 2021 A&G mini card: 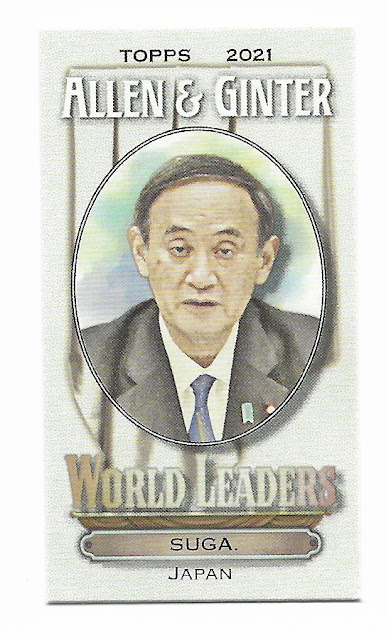 That's one of the World's Leaders minis from this year's Ginter set.  Like I said above, I'm still working on the vast majority of this year's mini inserts...and unfortunately for me, the trade spigot seems to be running a bit dry lately.  I'm hoping with more and more people reporting finding baseball cards back in stock at their local big box stores that maybe some Ginter will show up in the wild (and that some of those newly cracked mini inserts will eventually filter their way down to me)!
Let's stick with the 2021 A&G minis with my next trade, this time with user bravefan1: 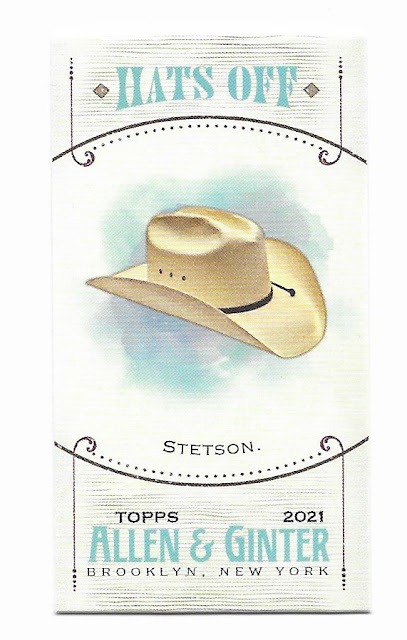 That's yet another mini set that I'm still working on - this time the Hats Off set.  Not every day you get a cowboy hat card in the mail.
Next, from user Johnsogr: 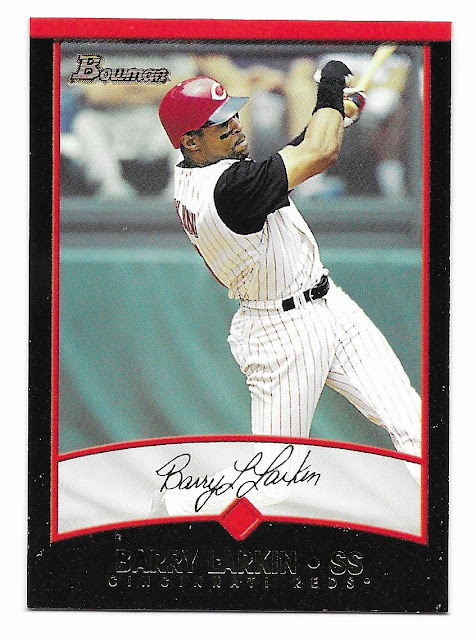 That's another new Larkin card for my collection - a 2001 Bowman Gold parallel to be precise (even if you can't tell from the scan)!  As I've said many times, I'm always happy whenever I can add a Barry Larkin parallel to my collection - it seems the vast majority of my Larkin want list is parallels (at least from about 1993 onwards)!
While most of my trading on TCDB these days seems to be centered around 2021 Allen & Ginter or else Barry Larkin, there are still times when I'm able to acquire something I need from an older set that I'm working on yet.  Case in point, this simple swap with user CaptainCub: 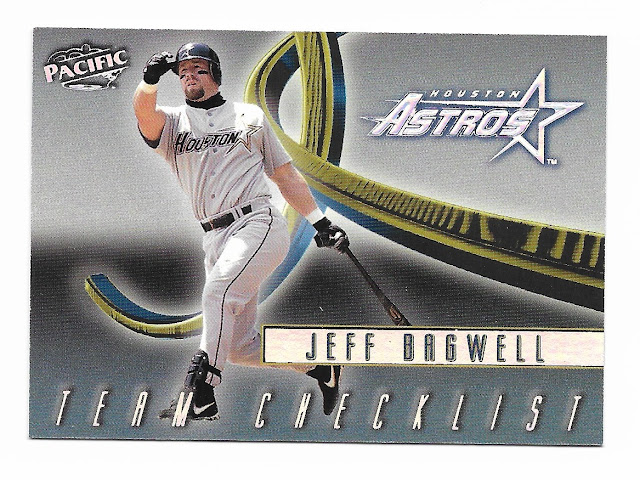 That's a 1999 Pacific Checklist card from the Team Checklist insert set.  I've been slowly plugging away at this set for quite some time - who knew team checklists would be so hard to find?!  In fact, the entire 1999 Pacific set has caused me quite a bit of collecting grief but I'm finally nearing the end of the project - here's all that I still need from that particular set:

Next up, from user Lubo comes my first multicard trade of the week (well, the first trade where I receive multiple cards - most of my trades this week had me sending out multiple cards). 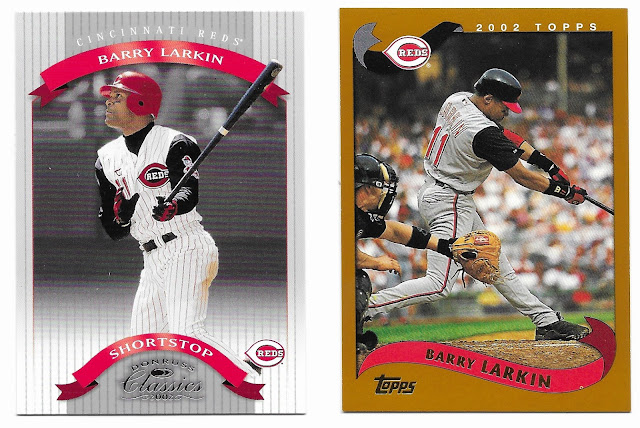 That's two more Barry Larkin base cards for my collection including the 2002 Topps base card that I somehow never owned prior to now.  The year 2002 was a year that I wasn't collecting cards (I was in college then) but still, you'd have thought I'd end up with at least one such Larkin card in the years since then!  Well, thanks to TCDB (and Lubo), at least that binder slot is now able to be filled!
My next swap of the week was with user jsteved:

This one was a little unusual in that while I did get a card you'd expect me to trade for (the 2002 Donruss Elite All-Star Salutes insert) I also ended up with six assorted cards featuring the likes of Mike Trout, Shohei Ohtani, and Fernando Tatis, Jr.  The reason being that jsteved needed a bunch of cards that I had available for trade but he didn't have anything (other than the one Larkin card) that I was interested.  I told him to throw in some Mike Trout cards (since those are easier to trade away typically) and I'd call it even.  I'm always happy to try and help out fellow set collectors!
Next, from user PoogieFan: 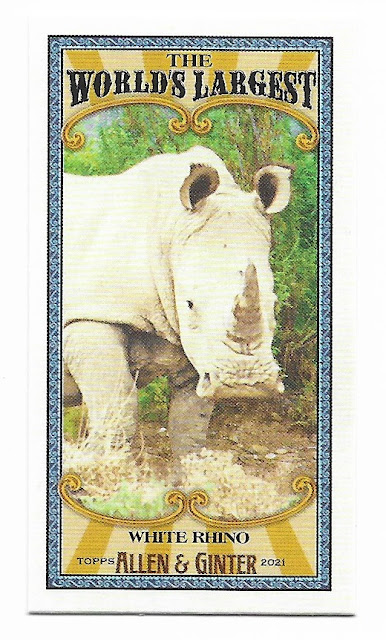 This little A&G card took it's sweet, sweet time getting to me (all the way from California).  PoogieFan reported sending this card back on October 1 and it didn't arrive to me until October 15.  I guess two weeks for an across-the-country PWE isn't that bad when you think about it (and from what I hear coming out of the USPS times like that are going to be the new normal).  Oh well, at least it got here!
I have one final trade to show off but since the swap with PoogieFan was the final trade of the week to feature 2021 Allen & Ginter, I figured I'd include what I still need from the set here:

Finally, the last trade of the week - and it comes from a fellow Pennsylvanian - user OralInPA: 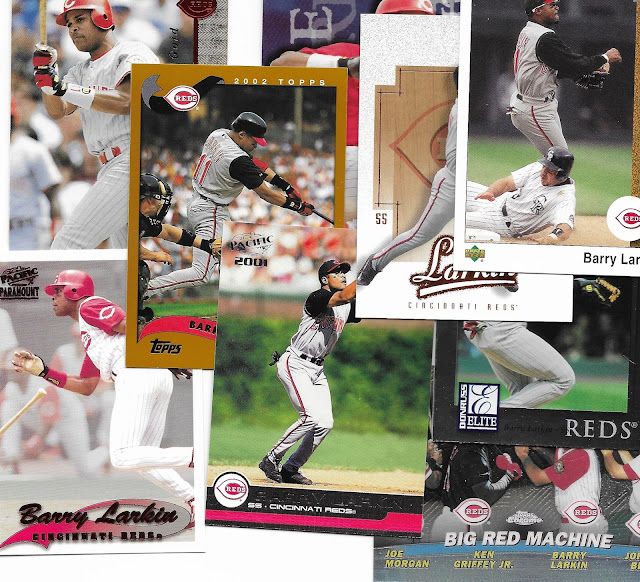 Yep, cleaned him right out of Barry Larkin cards that I needed!  Particular observant readers may notice another 2002 Topps Barry Larkin in that pile...I went almost 20 years without owning a single copy of that card and then "bam!" in one week I now own two.  Oh well, one's already up on my trade bait page!
That does it for this week!  Thanks to the mail dump at the end of the week, it ended up being another great week of TCDB action.  Here's hoping the trading doesn't slow down much as the weather cools off and baseball moves to the back of the sport community's conciousness.
TCDB