There were a lot of interesting answers - with the common theme of "switching it up". I think that's the best idea of all, and I plan to continually evaluate the cards I have in display as I receive new cards. I'm fairly certain there are a few cards that will never leave their spot in the display, but who knows.

In the end, I decided to fill my display with 15 Reds cards and 5 cards of other "favorites". In this case, I mostly picked non-Red favorite players. The biggest obstacle for me was the fact that I only wanted to display duplicate cards since I didn't want to remove cards from their sets (I'm a big set collector).

1987 Topps:
281: Cincinnati Reds Team Leaders (featuring Rose): This card holds more sentimental value than any other card I own. So much so that I have already written two blog posts featuring the card (here and here).
393: Pete Rose, Reds Manager card: I don't like Rose the person much, but Rose the player was magnificent. Plus I really like the 1987 Topps set.
648: Barry Larkin rookie card. My dad grew up watching players like Bench and Rose. Larkin was my generation's version of Bench, a great lifelong Reds player. 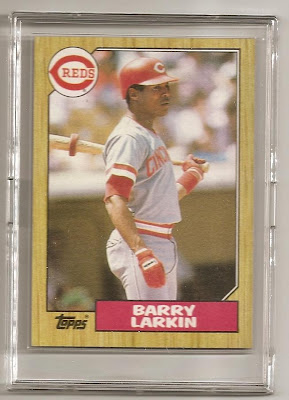 1988 Topps:
475: Pete Rose, Reds Manager card: This is probably the first card that will be replaced (perhaps by a 2009 card?). My personal requirements to only show off duplicates left me a little shortchanged for iconic cards from the 80s. 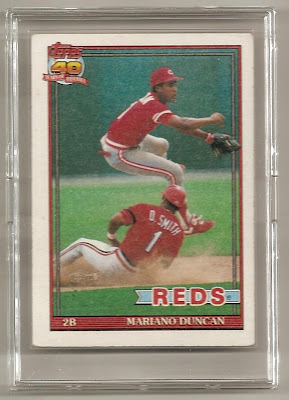 122: Paul O'Neill: O'Neill is probably thought of as a Yankee by most people, but to me he'll always be a Red. I liked O'Neill, and as a testament to how much, I didn't even dislike him when he put on the hated pinstripes.

1993 Post Cereal:
28: Barry Larkin: Another card of one of my favorite players. Post cereal cards hold a special place in my collecting heart. I remember picking out cereal based on which had cards as a kid, and later on I used Post Cereal cards to make a lot of money on eBay.

1993 Topps:
110: Barry Larkin: This is a nice card in an underappreciated set. The 1993 Topps set had a nice, clean border and decent photography. That said, this will probably be replaced second after the 1988 Rose card.

2005 Upper Deck ESPN:
27: Ken Griffey Jr.: I always liked Griffey Jr. In fact, he was one of my favorite non-Reds player throughout the 90s. I still respect the guy and wish him the best of luck, whether it's in baseball again or in retirement. As for this particular card, I actually like the base design, which is weird because it's a busy, flashy design (something that I normally don't go for at all).

2007 Topps:
414: Brandon Phillips: Brandon is one of my favorite current Reds (the other is coming up in a few cards). This particular card was a nice change of pace from the white bordered base set but it is otherwise uninspiring. I'll be keeping a lookout for a duplicate Phillips card to replace this one in the future. 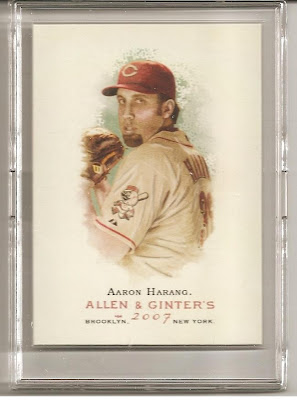 52: Aaron Harang: I love the Allen & Ginter set - and this particular set was the first set I ever completed by hand. It's not easy to find a decent picture of Harang - this card was the least of the poor photos.

2007 Topps Heritage:
181: Edwin Encarnacion: Edwin is another of my favorite Reds...and here he is the lone representative of the second set I completed by hand, literally days after finishing the 2007 Allen & Ginter set.

2008 Upper Deck Masterpieces:
52: Ken Griffey Jr.: One last hurrah for Griffey as a Red on a really nice card.
59: Jay Bruce Rookie card: I figured it was only fitting to have a rookie of one of the Reds' brighest current stars to complement the Larkin rookie. I happen to like the Masterpiece Bruce rookie better than any of my other Bruce duplicates.

2008 Upper Deck Baseball Heroes:
195: Mike Schmidt, Ernie Banks, and Frank Robinson: The card itself is sort of ugly (hard to see the players), but the player selection is iconic. I'm a huge fan of both Robinson and Banks, and Schmidt is no slouch himself. That said, this will probably be replaced by a card featuring other Hall of Famers in some 2009 set (or so I hope).

2008 Topps Stadium Club:
91: Jackie Robinson: Great picture, great player, he truly deserves to be on any board featuring great baseball players, no matter which team you root for.
95: Honus Wagner: I've lived in Pennsylvania for all my life (excluding graduate school), so the Pirates hold a special place in my heart. Wagner is one example of that influence. 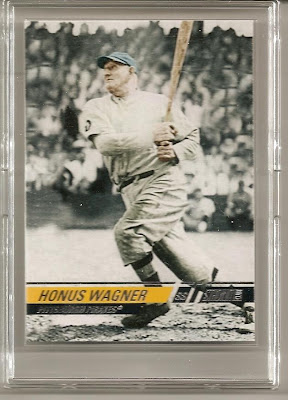 97: Nolan Ryan: One of the greatest pitchers of my generation - and probably one of the greatest pitchers of all time. I wish I had an extra of the Nolan Ryan Masterpieces card from this year instead though, I really liked the Astros bright colors instead of the drab New York Mets blue.
98: Roberto Clemente: The second card of a great Pirate. I love the Stadium Club set (even though I HATE, HATE, HATE the "divisible by three" cards gimmick.)
Barry Larkin Baseball Cards Cincinnati Reds FanOfReds Challenge MLB Personal Pete Rose