Group Break Sign Ups! 4 or 5 Boxes to be Busted!

This time, I'm going to bust four boxes (unless all slots sell and then I'll add a fifth box to the mix)!  The first slot is $18.00, any additional slots are $15.00 each (price includes shipping).  Like most of my group breaks, this one promises some higher end cards, a chance at relics and/or autographs, and plenty of base cards - everyone should be happy with their cards!

In order to help fill the group break, I've paired up a bunch of the "lesser" teams into themed slots.  Hopefully that will work out to make each price "fair" for all participants!  All but the Pinnacle box offer the chance at some nice autographs and/or relics, not to mention serially numbered cards and plenty of unique inserts!

Here are the slots (teams with a user name and ?? next to them were spoken for with my original announcement.  I'll give those people priority, but any slots that aren't paid for by 6:00 PM on Friday, November 12 will be opened up for claiming.  To claim a slot (or more than one), please send PayPal "gift" to fanofreds.auctions A T gmail D o T com.  With your payment, please include your user name, address, and team(s) claimed...that will speed up the shipping process later on, thanks! 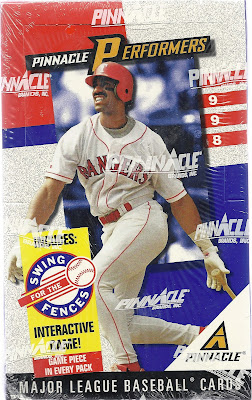 Like most of my group breaks, I always try to find at least one box that offers a lot of cards and inserts for a low price.  Since I've exhausted most of the Collector's Choice sets of the late 90s, I decided to give the Pinnacle box a shot this time around.  I don't know anything about the set other than what is stated on the side of the box.
This set has plenty of inserts - judging by the odds stated on the box, we should expect:
12 Swing for the the Fences player cards
12 Swing for the Fences homerun cards
3-4 Peak Performers cards
2-3 Launching Pad cards
1-2 Power Trip cards
And about a slightly better than 1:2 chance at finding a Big Bang/Season Outburst card  (seeded 1:45 packs) 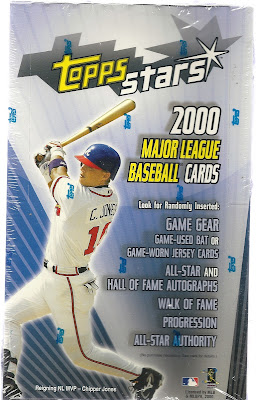 Another set that I don't know much about, the 2000 Topps Stars set looks like it could be a lot of fun.  The front of the box mentions a bunch of intriguing inserts, but no odds are given on the box.  Here's what we might find lurking in the box:
Game-used Bat or Game-worn Jersey cards
All-Star and Hall-of-Fame autographs
Walk of Fame
Progression
All-Star Authority
While no odds are given, the autograph checklist is quite strong - featuring guys like Derek Jeter, Ozzie Smith, Bob Gibson, Willie Stargell, Joe Morgan, Brooks Robinson, Al Kaline, Frank Robinson, Carl Yastrzemski, and plenty of others! 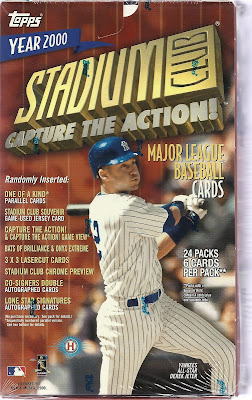 This is a box I've been looking forward to adding to my group breaks for awhile, the early 2000s Stadium Club cards are a lot of fun.  Once again, Topps doesn't give specific odds, but there is the possibility of some great autographs in this box!  Other things to look for:
Parallel cards (of course)
Stadium Club Souvenir Game-Used cards
Capture the Action cards
Bats of Brilliance & Onyx Extreme
3x3 Lasercut Cards
Stadium Club Chrome Preview
Co-Signers Double Autograph cards
Lone Star Signatures Autograph cards
The Stadium Club signature lineup is also strong - possible autos include Alex Rodriguez, Derek Jeter, Josh Hamilton, Fred McGriff, Magglio Ordonez, Wade Boggs, and plenty of others! 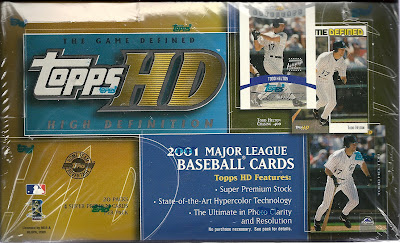 The Topps High Definition line lasted two years (I believe) and was a high-end type card.  I don't think I've ever seen a card from the set, so this should be a lot of fun!  (It's always fun to try and track down interesting boxes for my group breaks!)  Once again, Topps doesn't give odds but the following cards can be found inside boxes of 2001 HD:
Autographs and Game Used cards
Short Prints
The Game Defined
Images of Excellence
Sequentially Numbered Parallel set (#/199)

And finally, if all the slots get claimed, I'll throw in another box: 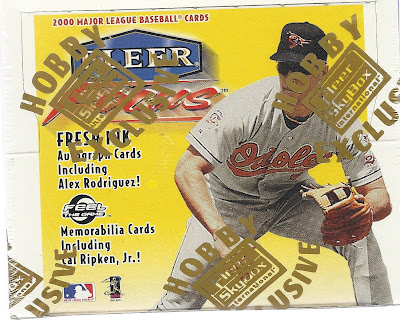 The Fleer Focus set is a set that I collected a bit of back when it was new...and I really liked it!  The box has plenty of neat cards, including:
Sequentially numbered rookies
Masterpiece Mania Sequentially Numbered
Focal Points
Focus Pocus
Fresh Ink Autographs
Club 3000
Club 3000 Memorabilia - Hand Numbered

Please leave a comment below with the slots(s) you are claiming and then send payment to the address listed above (or in my profile).  Let's fill up the group break and then bust all five boxes!
Nachos Grande Group Break 4