2 by 3 Heroes: Turning Ginter into LEGO!

on March 29, 2013
Happy Good Friday everyone.  For me, Good Friday means a day off of work (my college doesn't close for President's Day or any other such holidays but they do close for Good Friday).  What better way to spend an off day than to write up trade post from a package that arrived in my mailbox about two weeks ago?

I sent Jeff (from 2 by 3 Heroes) a bunch of 2011 Allen & Ginter mini insert cards (read his version of the trade on his blog).  Since he said he didn't have much to offer off of my want list (this was before I added a bunch of new stuff to my list), I said that I would gladly accept LEGO sets and/or packages of collectible minifigures in return.

In fact, he went above and beyond the call in sending me three unopened LEGO Series 9 Minifigures.  I was excited by the series 9 packs because I only owned two (out of the 16 in the set) at that point.

We begin with the bad news (in a way): 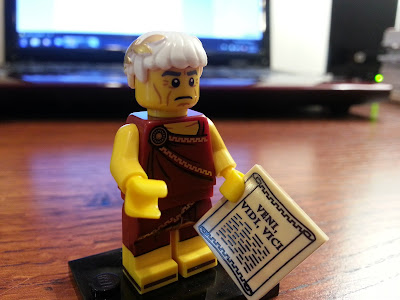 Yep, I previously owned exactly two figures and one of them happened to be the Roman Emporer.  The good news is that I LOVE the figure - so having two isn't such a bad deal (I will make it available for trade however if I could land some other figures - from any series that I still need).

Luckily, the next two packages held new figures - and both were different which means I now own 4 of the 16 Series 9 figures.

First up, the Hollywood Starlet. 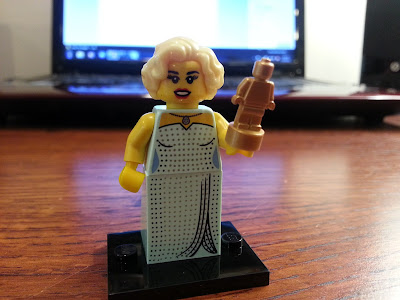 One of the good things that the LEGO company has been doing lately is making the sets more gender balanced.  Sure, the Collectible Minifigures are relatively easy to ensure a nice mix of males and females...but  LEGO has also taken steps to ensure a better gender mix within its other "regular" sets.  If you didn't know, I recently began a LEGO-centric blog called Legends of LEGO where I try to review sets and highlight some of the various minifigures in my personal collection.  If you look at the Minifigure Museum page on that blog, you'll see plenty of female figures - and that's only those in my collection!

Personally, I like females such as tennis players, rocker girls, and zookeepers much more than the stereotypical "red carpet darling" but I can see a place for figures like the Hollywood Starlet as well.  In fact, the Hollywood Starlet would go great with the newly released (and awesome looking) LEGO Palace Cinema.  The cinema is a set that I hope to get someday, but I need to figure out a way to raise some more cash first!

The third (and final) minifigure bag that Jeff sent me housed Cyclops!

The Starlet was cool enough I guess, but Cyclops is really where it is at!  He has a great body design (plus a mean looking club) but where he really shines is his eye.  He can either have his one eye open (as above) or you can switch around his head and make him squinting... 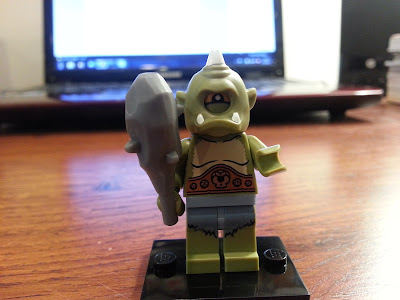 Here's the trio that Jeff sent looking happy to be in my collection!  Alright, so the Roman guy is looking a bit dour but the other two are happy! 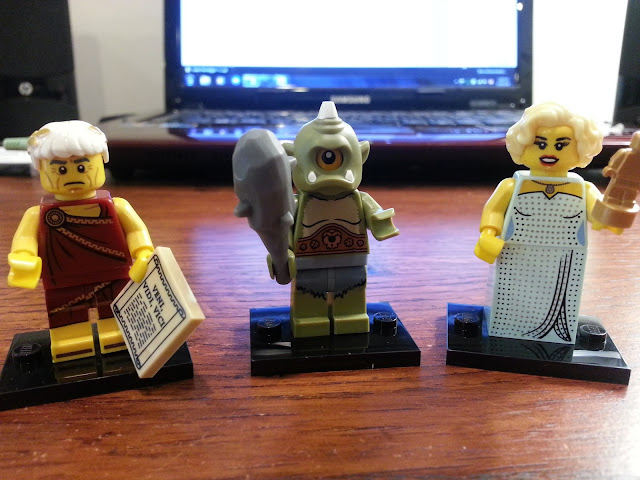 Thanks for the trade Jeff!  And, as always, if anyone else would like to trade - check out my baseball card want list and/or my LEGO want list.  I'll also happily accept ANY unopened LEGO sets that I could use as review fodder for my other blog (in exchange for cards or what have you).
2 by 3 Heroes Delivery Time Lego