My Visit to the Baseball Hall of Fame in Cooperstown!

on May 30, 2014
On Tuesday, I had to make the drive up to Oneonta, New York in order to attend a two-day planning meeting for a grant that my college may (or may not) eventually be involved in.  Since Oneonta is only about 20 minutes or so from Cooperstown, I decided to leave my house earlier than necessary in order to check out Cooperstown - both the town and the Baseball Hall of Fame!

I had been to Cooperstown once before when I was a young kid - but that was many years ago so I was excited to return to the town (especially to the Hall of Fame).

When I arrived in the little town of Cooperstown, I was immediately pleased to see how non-busy the town was!  I was able to nab a great parking spot in the Doubleday Field parking lot.  The one downside was the cost of parking - if memory serves it is $0.50 for every 15 minutes.  The good news is that the parking lot was only about a block from the Hall of Fame (and it was a pleasant day to walk around)! 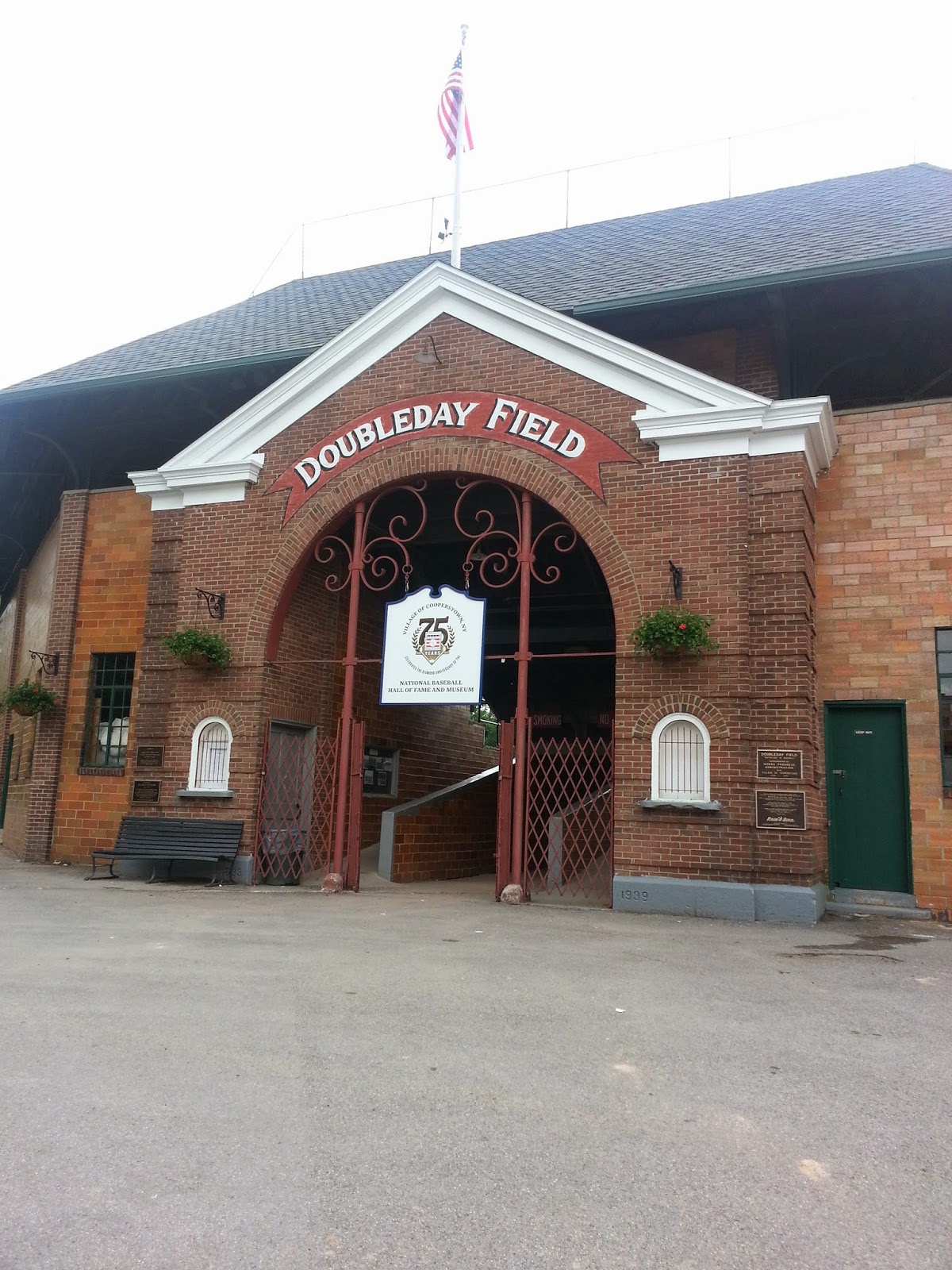 Once you arrive at the Hall of Fame, you have two choices.  You can turn left and pay to enter the actual museum or you can turn right and enter the gift shop (free of charge).  I did stop in the gift shop on my way out (and grabbed a Reds' t-shirt on sale plus something for my "man cave") but to begin with I decided to start with the museum.

As a Reds fan, I was mostly interested in making sure I didn't miss any of the Reds' history within the museum.  As it turned out, there was a LOT of Reds stuff in the Hall - something that made me quite happy! 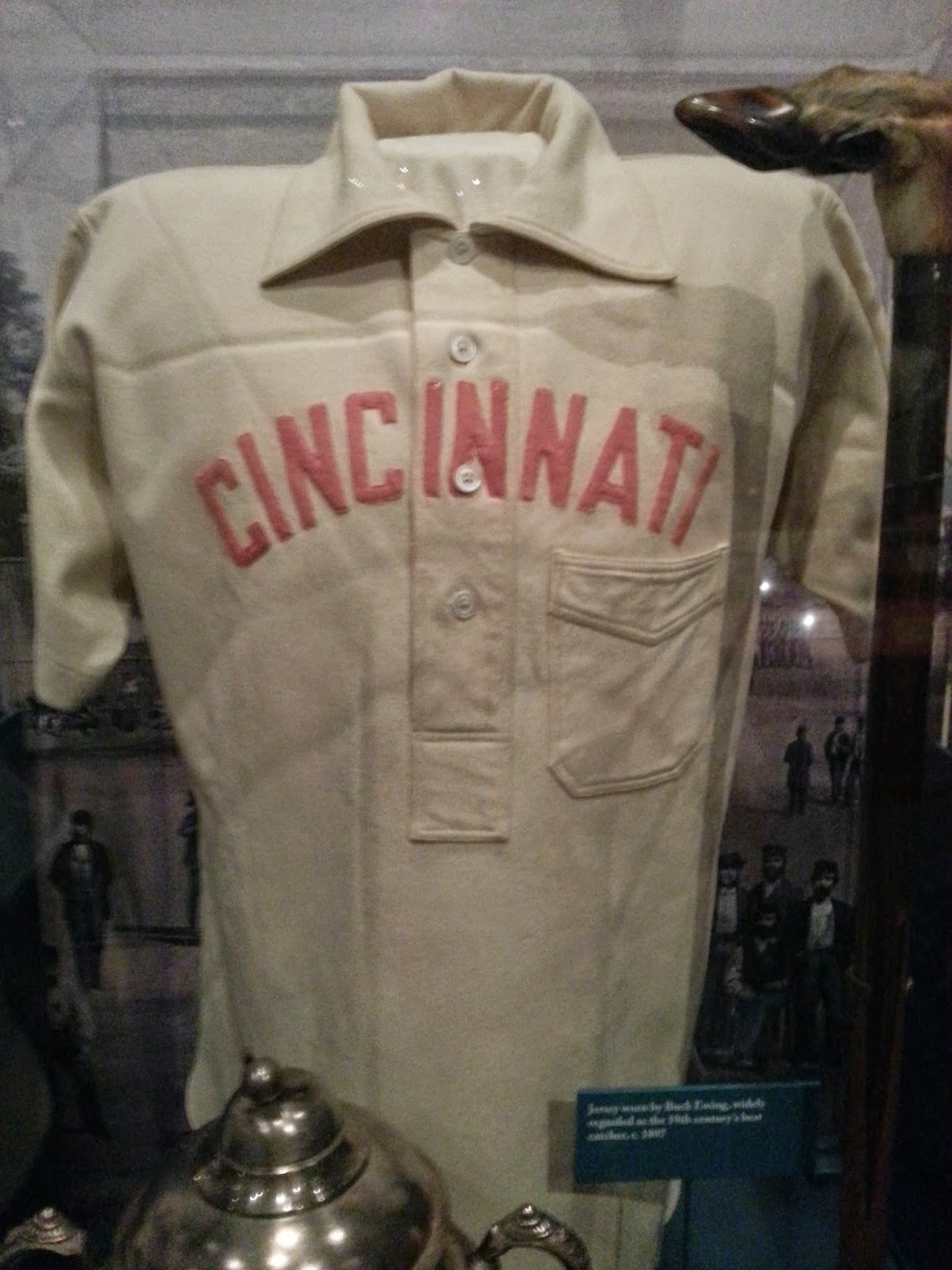 The first bit of Cincinnati gear that I discovered was this old timers jersey.

I wasn't only looking for Reds stuff though - heck, I knew I wanted to write a blog post about the Hall of Fame so I did try to take at least a couple of photos of relics from other teams.  Since the Dodgers have about 2,485,381 (roughly) active bloggers, this one's for the 2+ million of you: 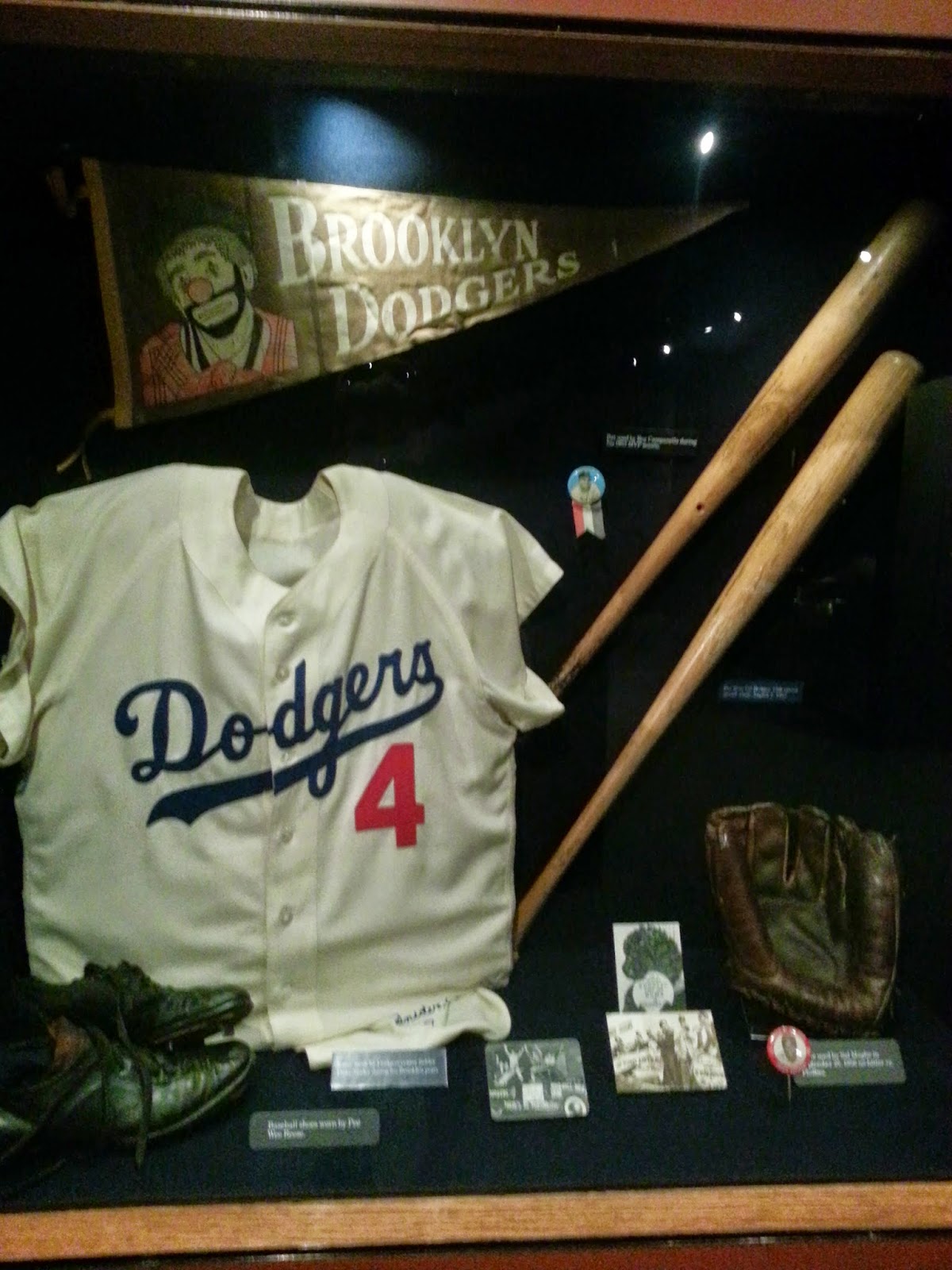 One of the big surprises for me was how often Pete Rose was referenced in the Hall of Fame (despite him being banned from inclusion in the Hall).  It seemed to be a dual standard to me, but what do I know? 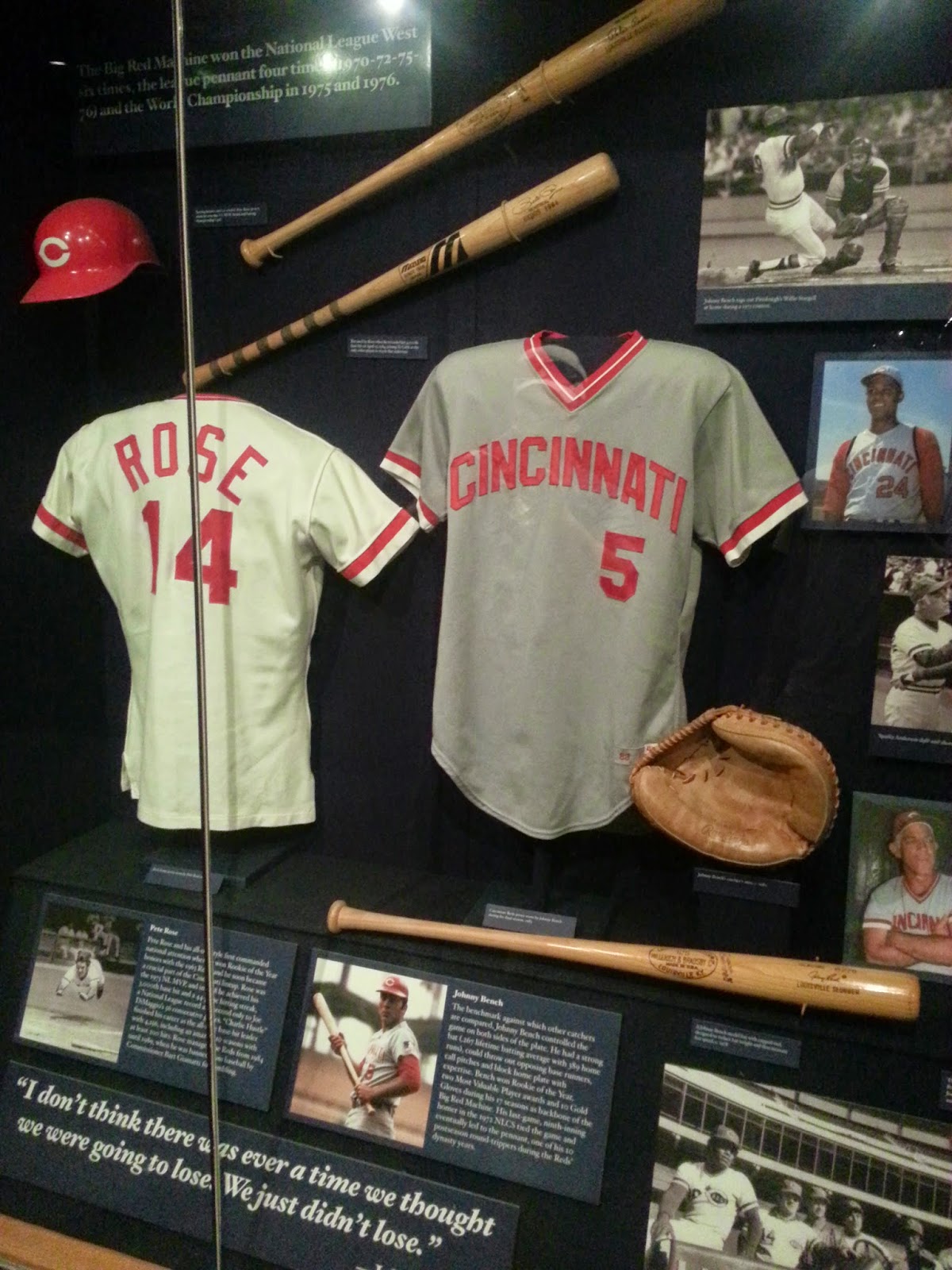 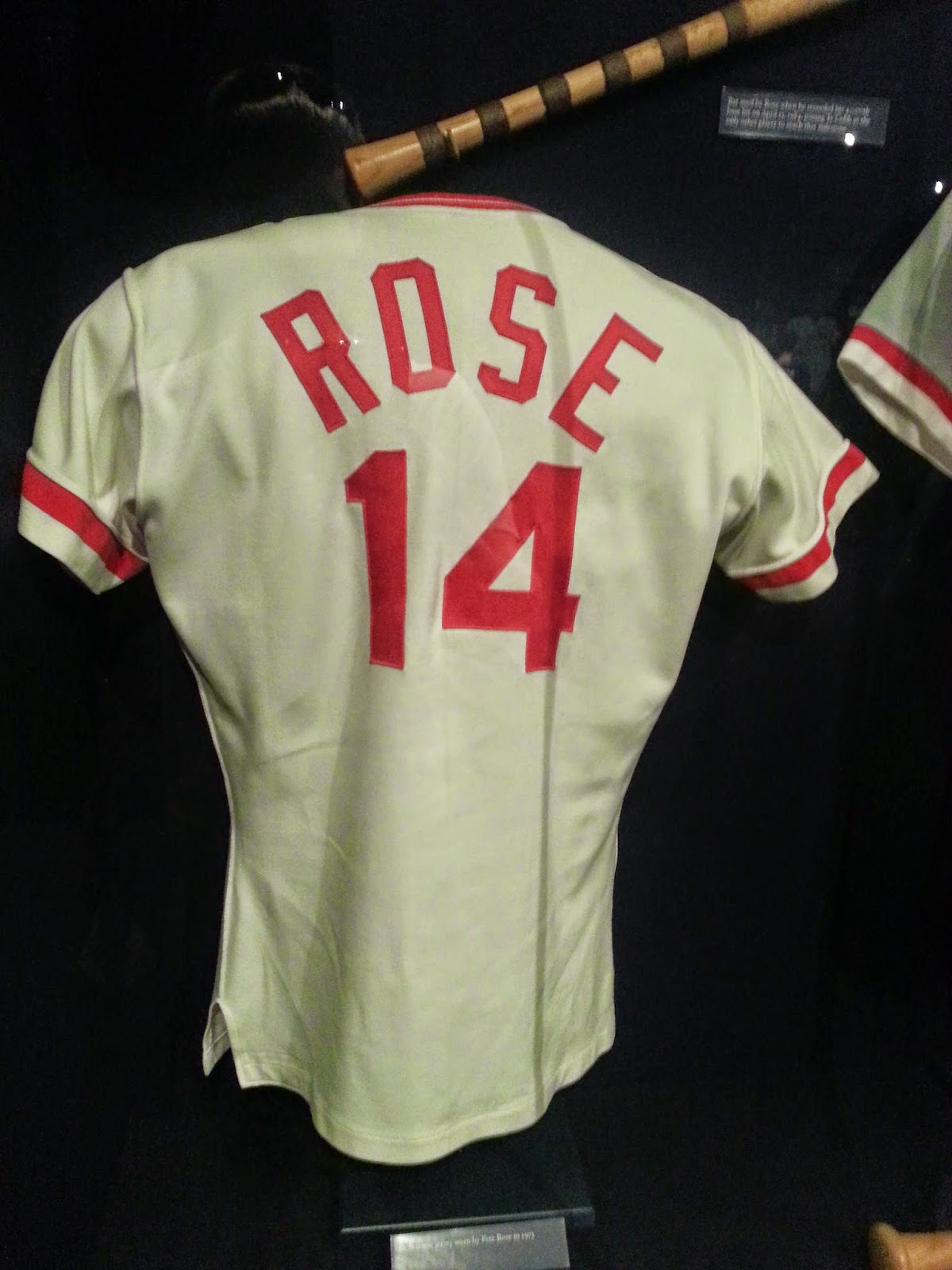 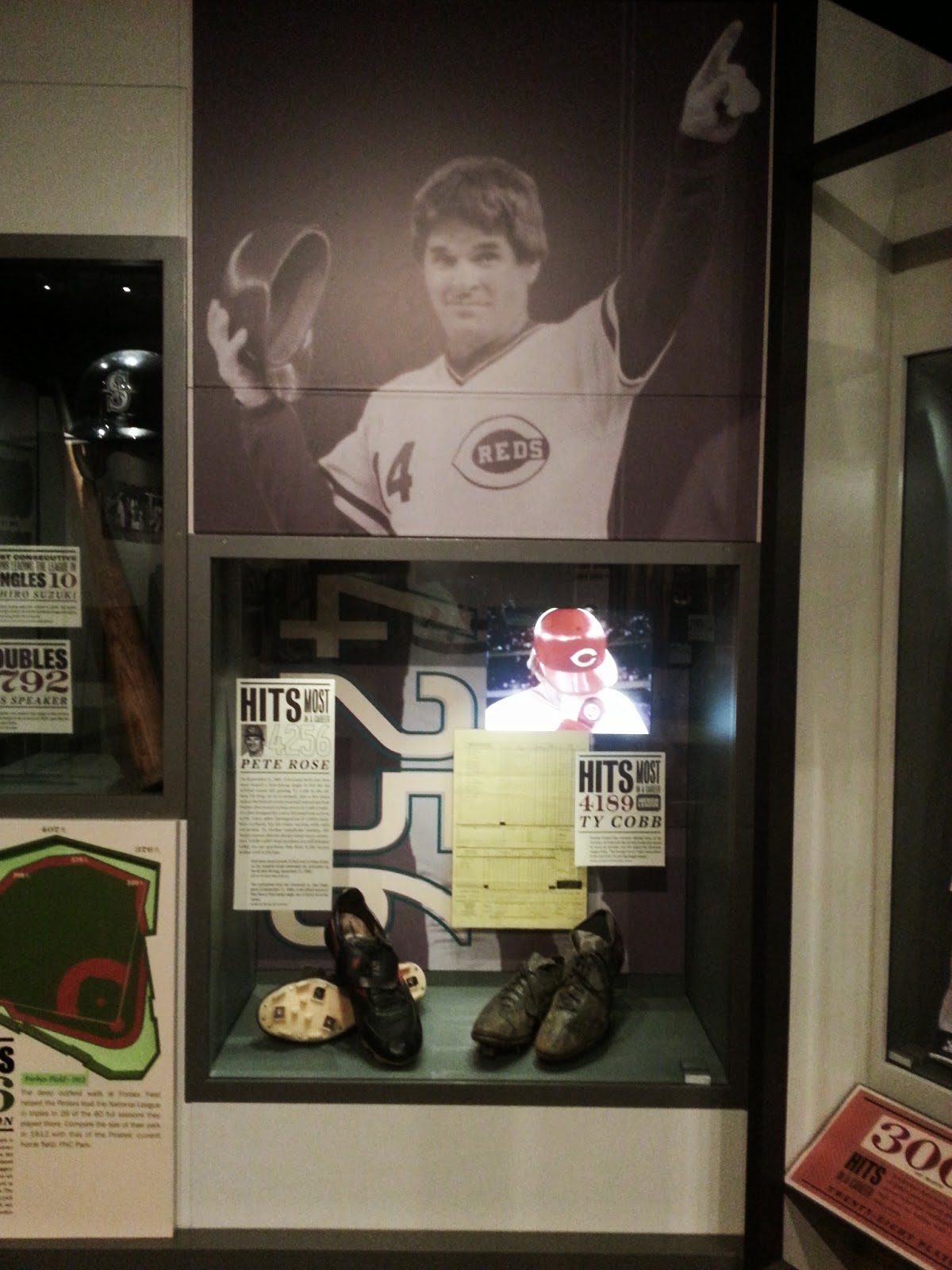 One of the kind of cool things that the Hall had set up was a locker room of sorts where each MLB team had its own locker (complete with various historical momentos from that particular team).  The Reds locker looked like this: 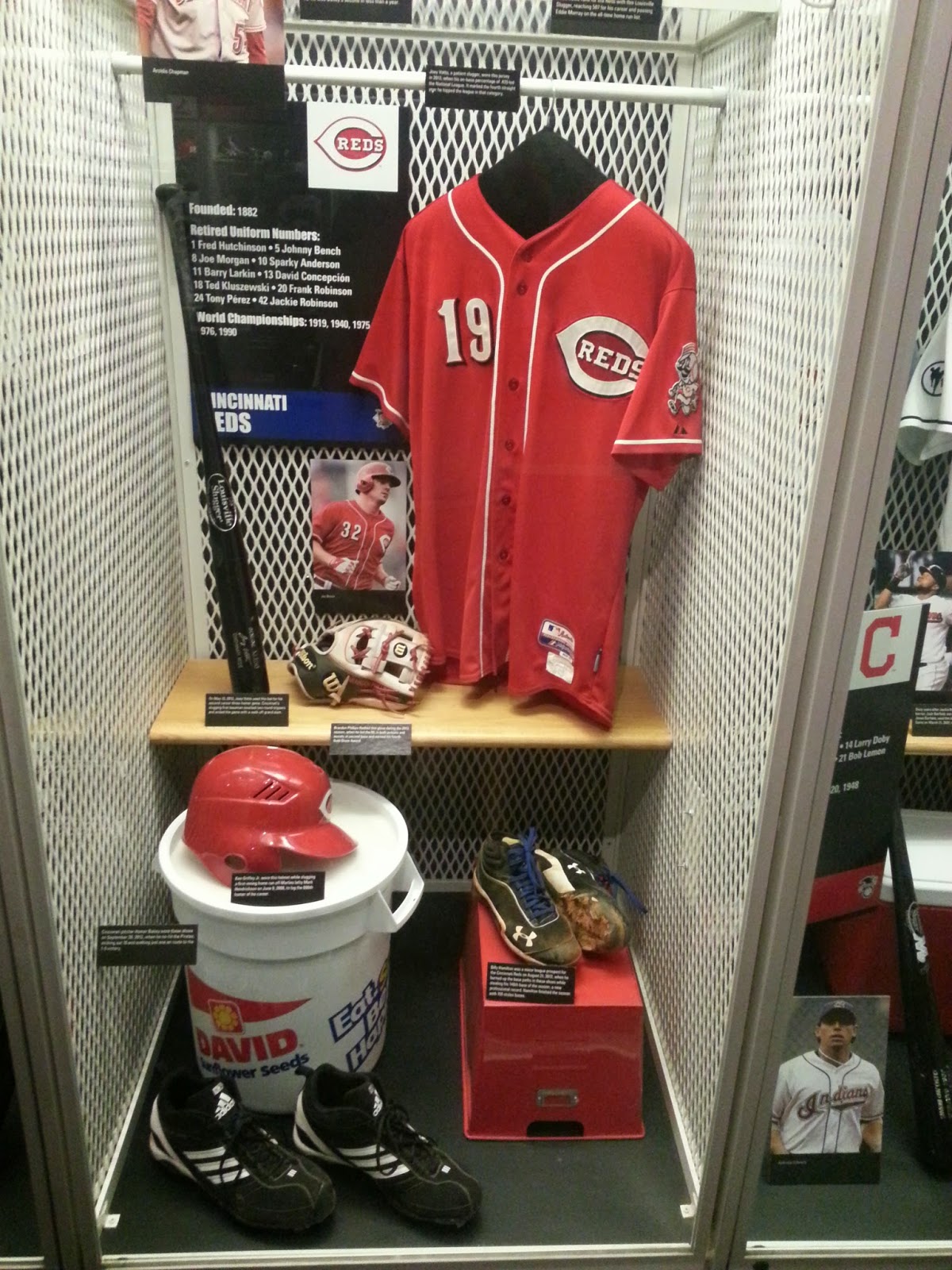 Within the locker, was plenty of cool stuff including Billy Hamilton's cleats from his stolen base record setting season in the minor leagues. 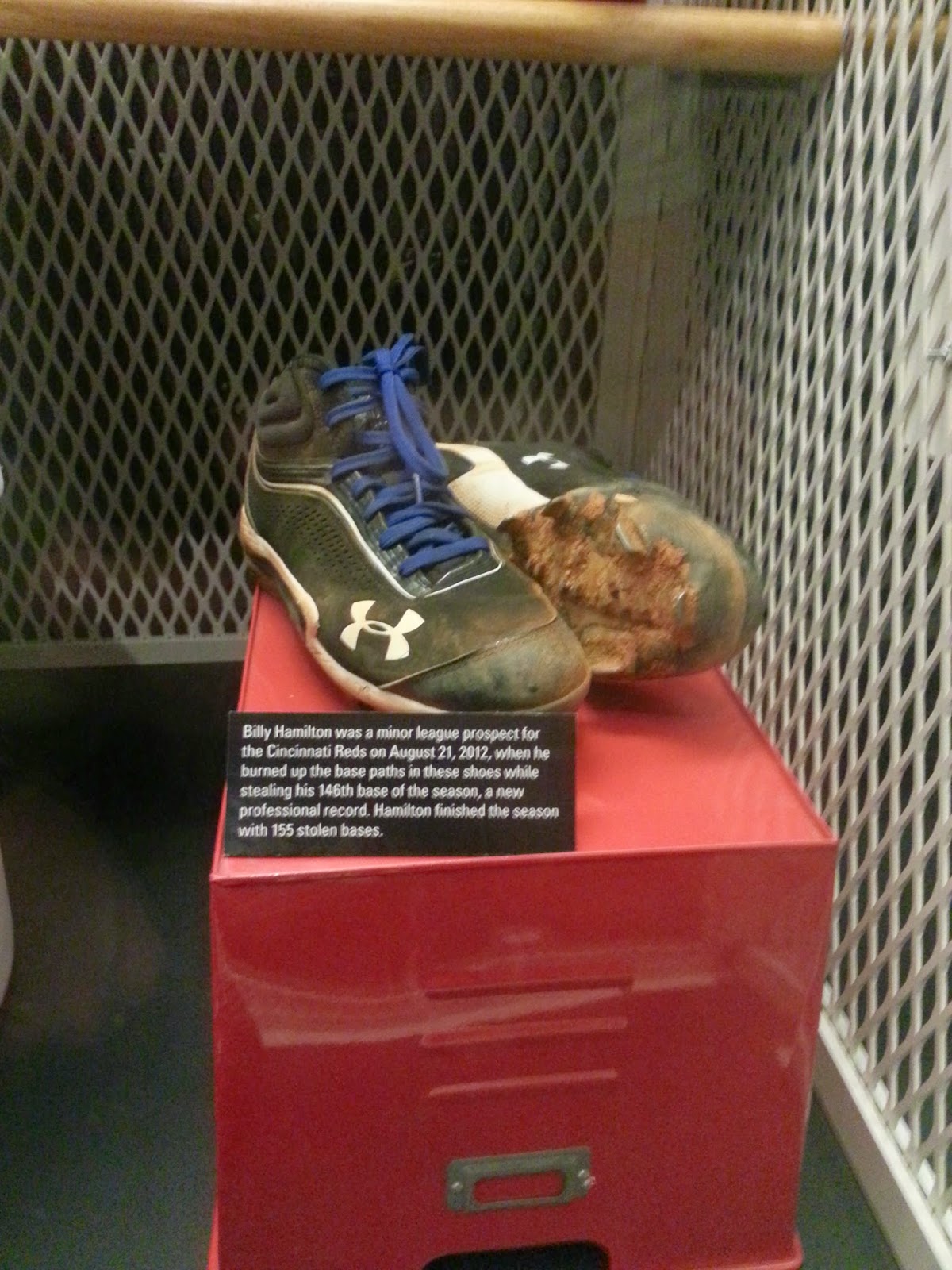 There weren't a lot of trophies within the Hall (certainly fewer than I had expected to see) but there were a few including this one in a display case with some more assorted teams!  I kind of like the Pirates' star hat - and that A's jersey is glorious in its bright 1991 Fleer yellow design! 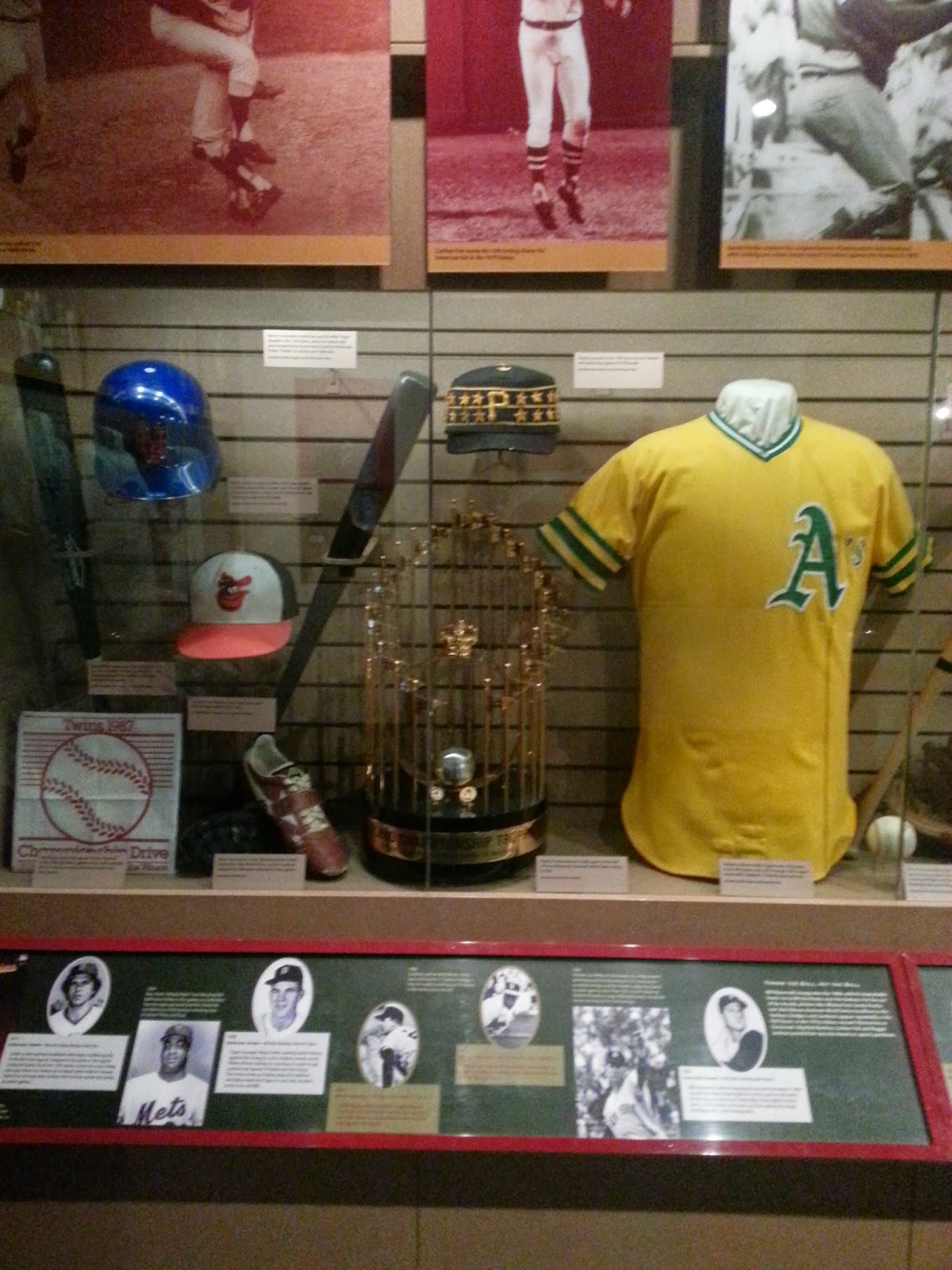 There was also a couple of art galleries within the Hall.  One was basically for photographs and the other was for more traditional artwork (paintings, drawings, etc.).  Once again, Pete Rose was on display! 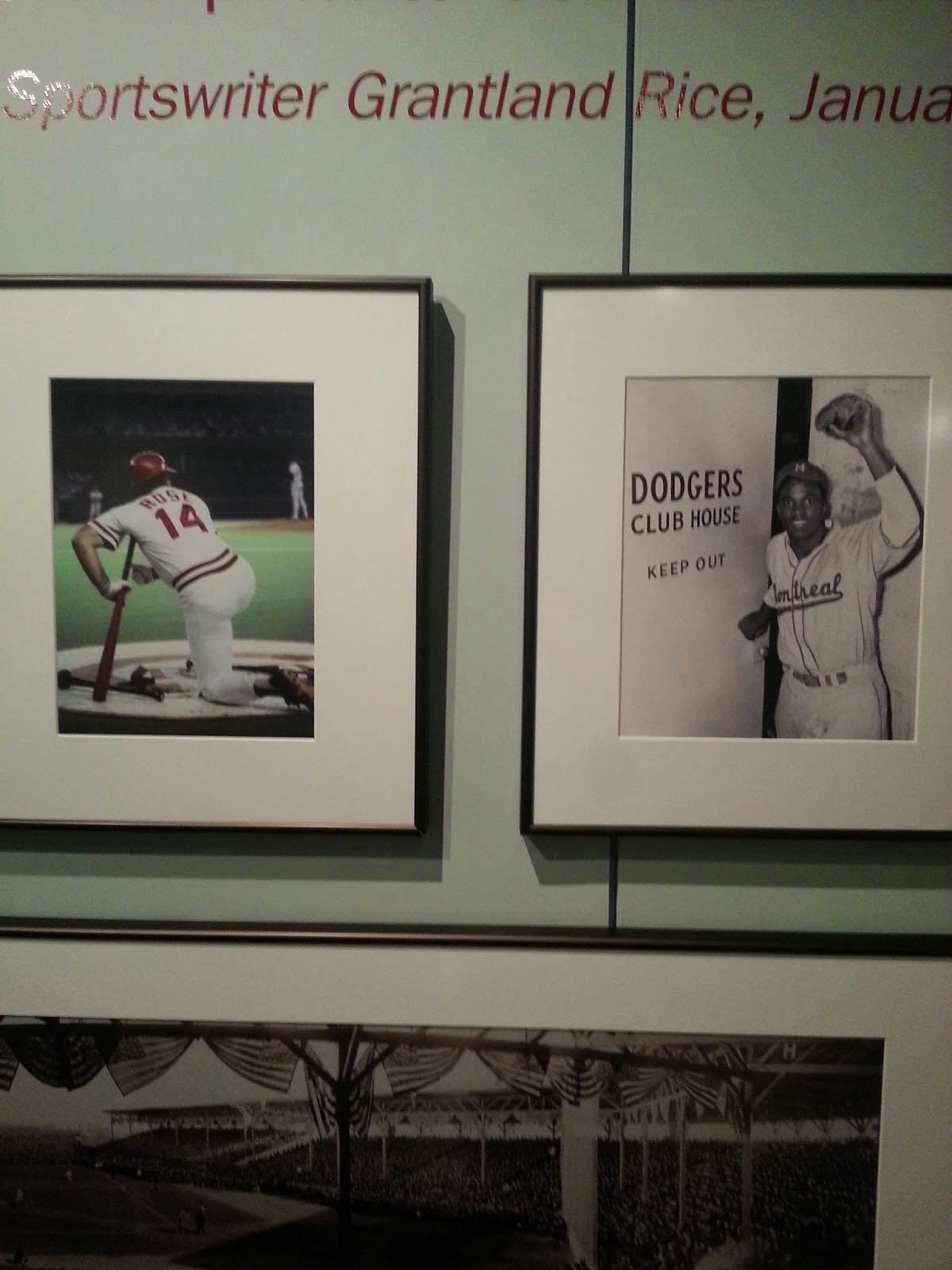 Moving to the other gallery, I found this rather cool Niekro "jersey".  The entire thing is actually made out of baseball cards - each carefully cut up so that the proper colors show through.  The tag next to the piece of art said that there were very few duplicate baseball cards used. 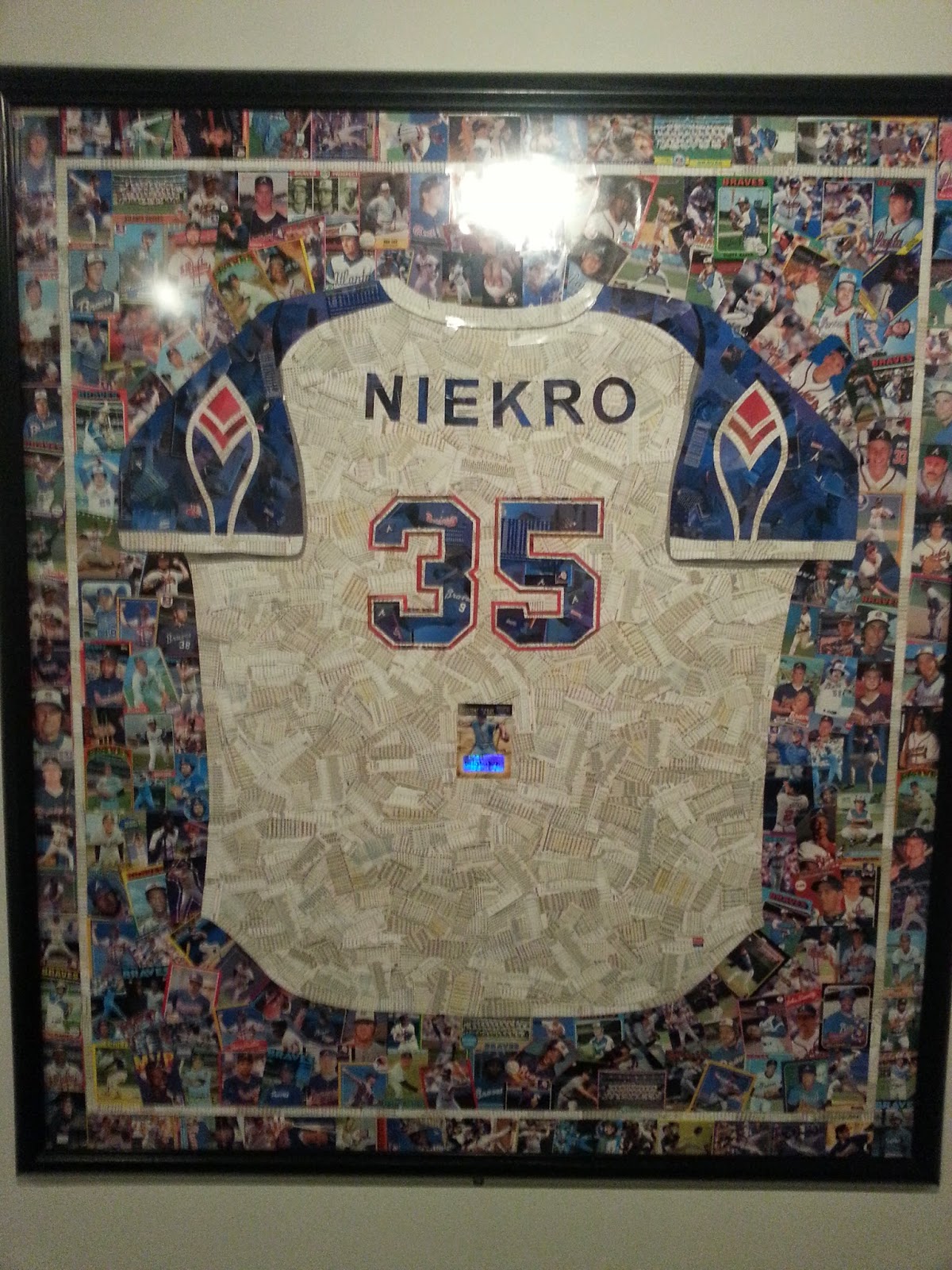 The one thing that I didn't like about that Niekro piece?  The one full baseball card in the middle was a Niekro autograph - but it was a sticker autograph.  For shame!

Some of you know that I collect the really old Allen & Ginter cards - especially the fish set which I'm still working on.  As part of my love for older things, I found a small display showing some really cool team banners. 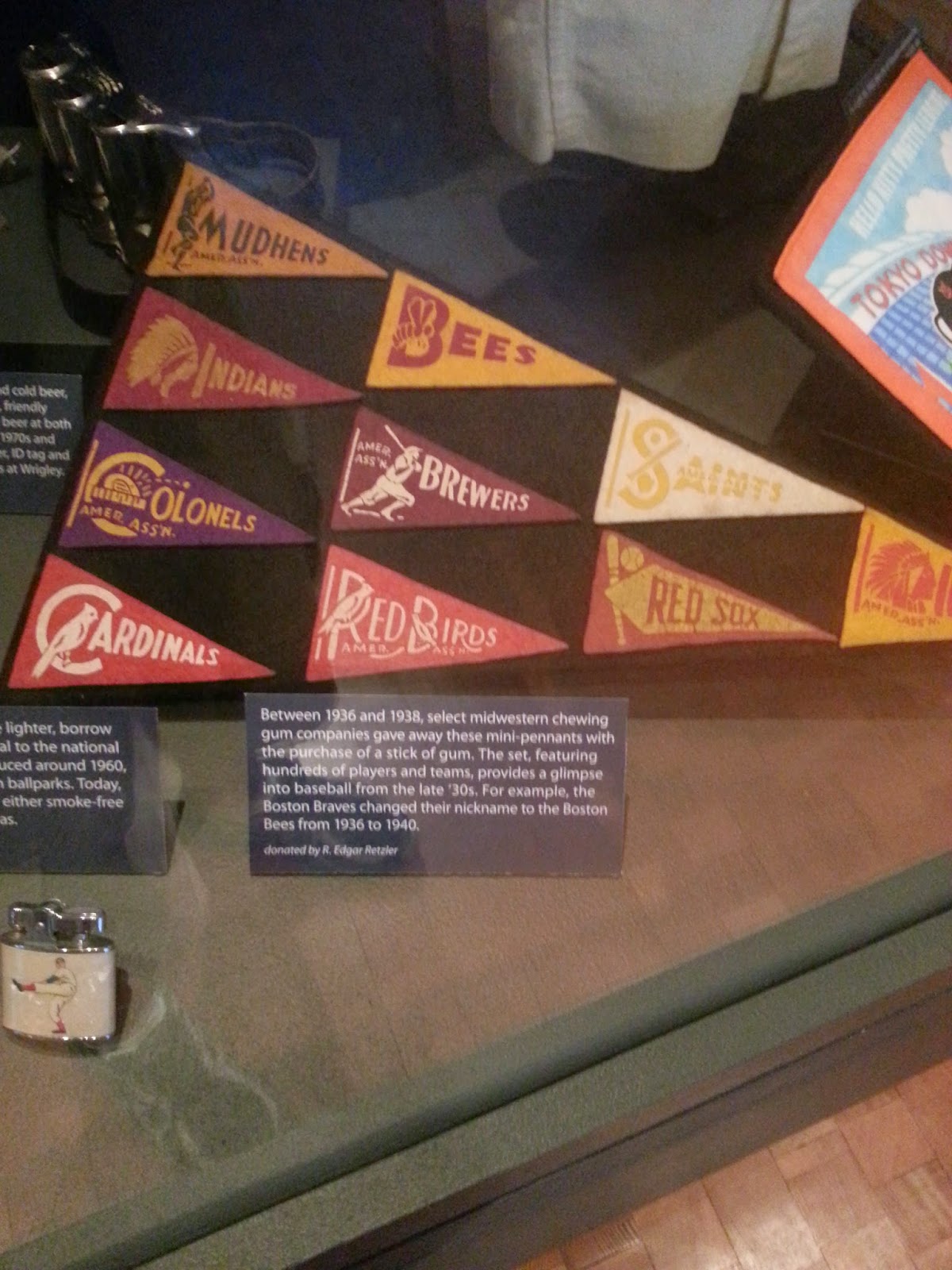 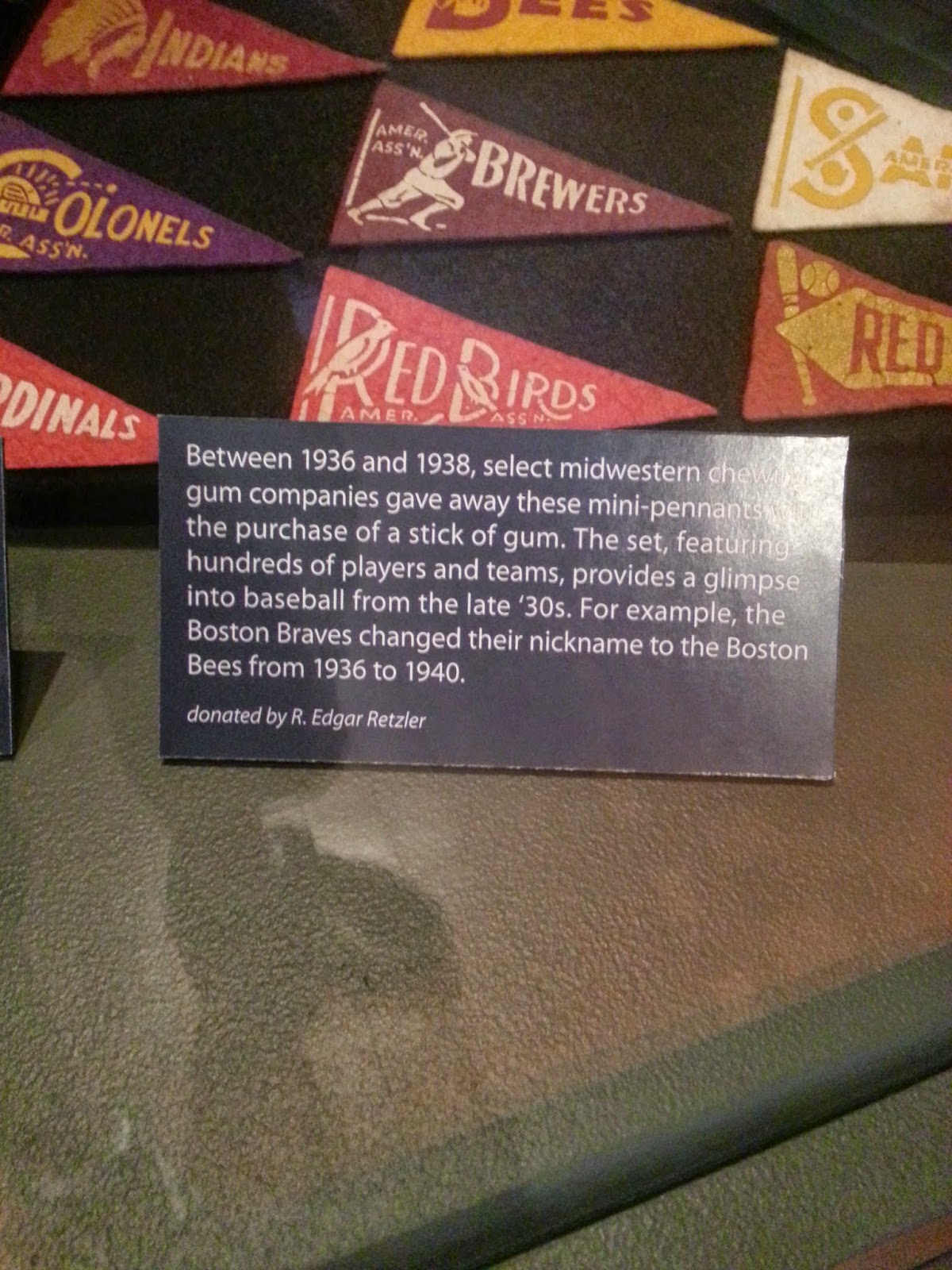 I actually tried my best to get a photo of the description as well with the hopes of seeing if these things are available of sites like eBay.  As of the time I wrote this post, there were quite a few listed (not all baseball though).

Continuing past the pennant display and into the second art gallery, I found this Norman Rockwell painting which I loved. 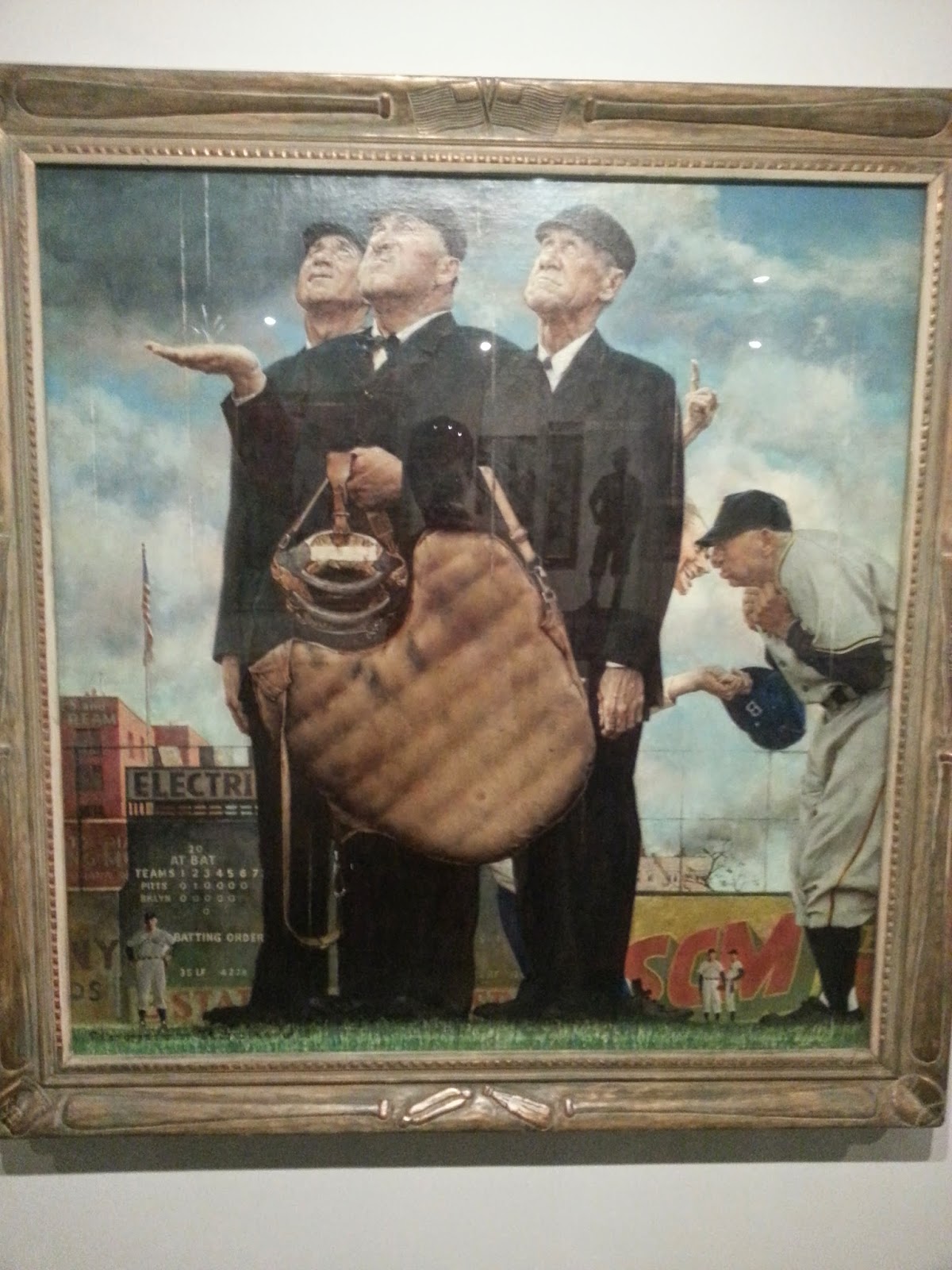 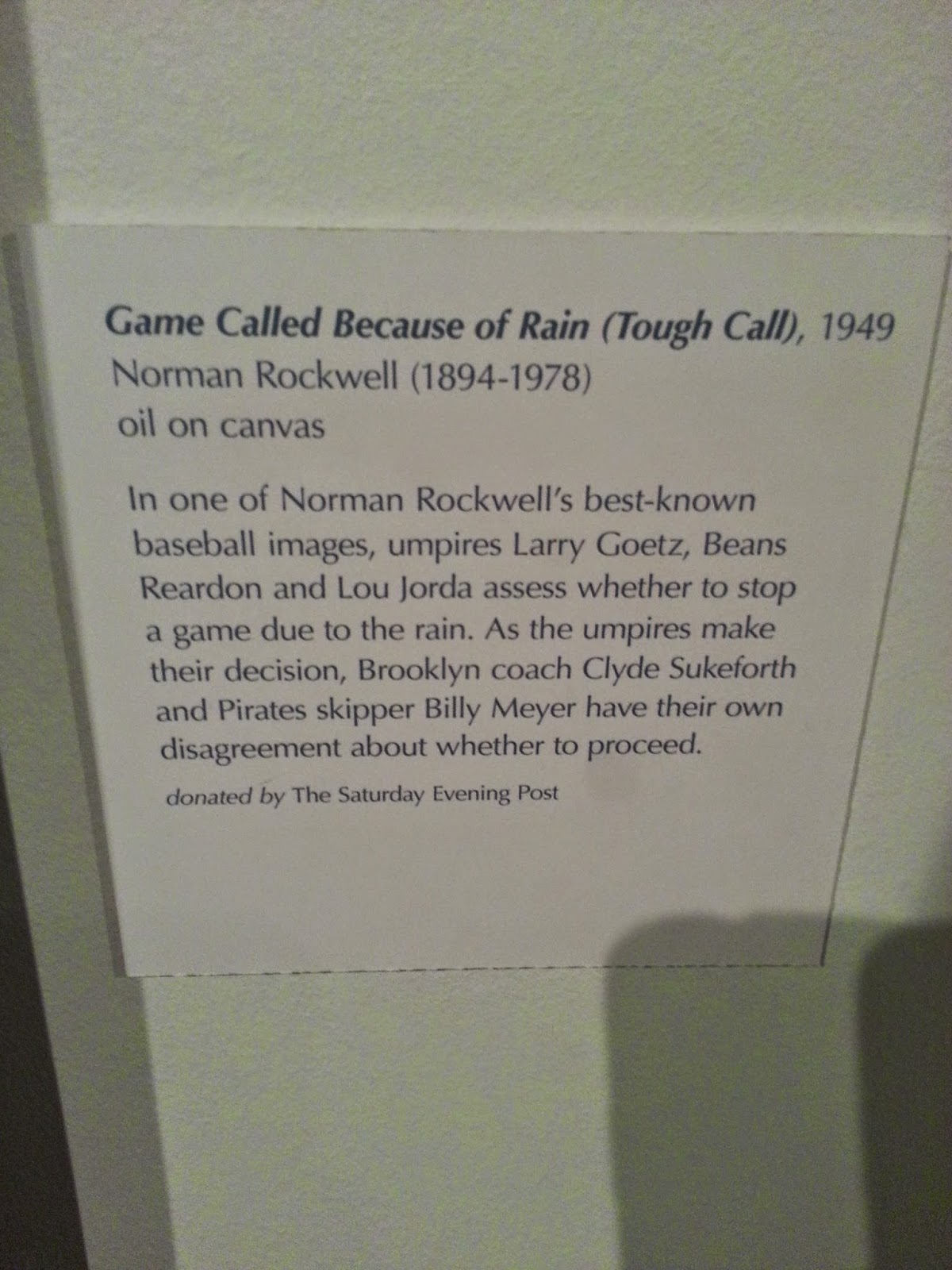 Now, one of the big reasons for my wanting to return to the Hall of Fame was because my favorite player (Barry Larkin) wasn't in the Hall the last time I was there.  Although Larkin's induction is certainly no longer "new news," I was happy to see that he still had a bit of a presence within the Hall itself. 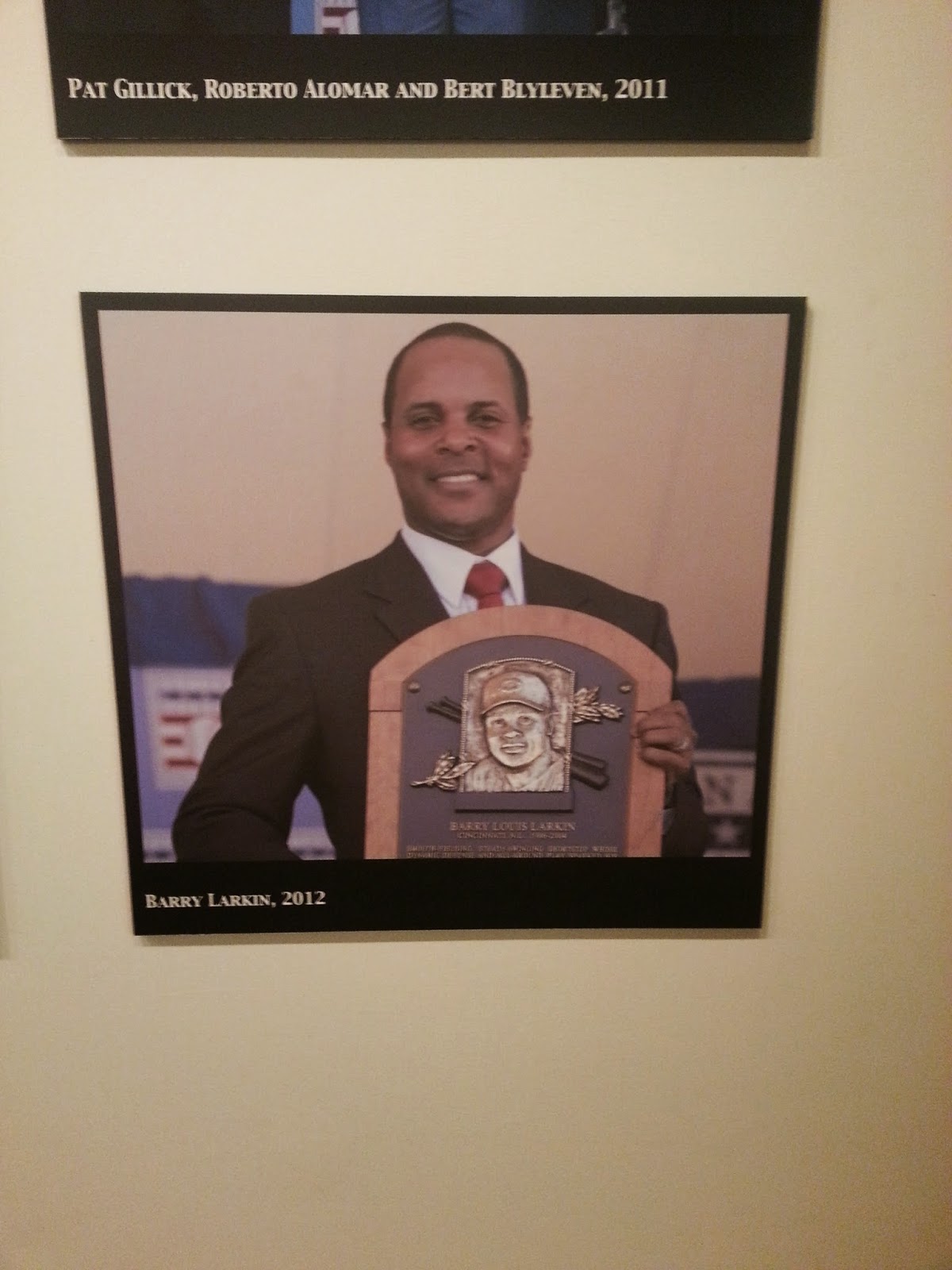 Of course, one can't visit the Hall of Fame without visiting all the plaques.  The actual room that houses the plaques is sort of small (much smaller than I remember it from when I was a kid)! 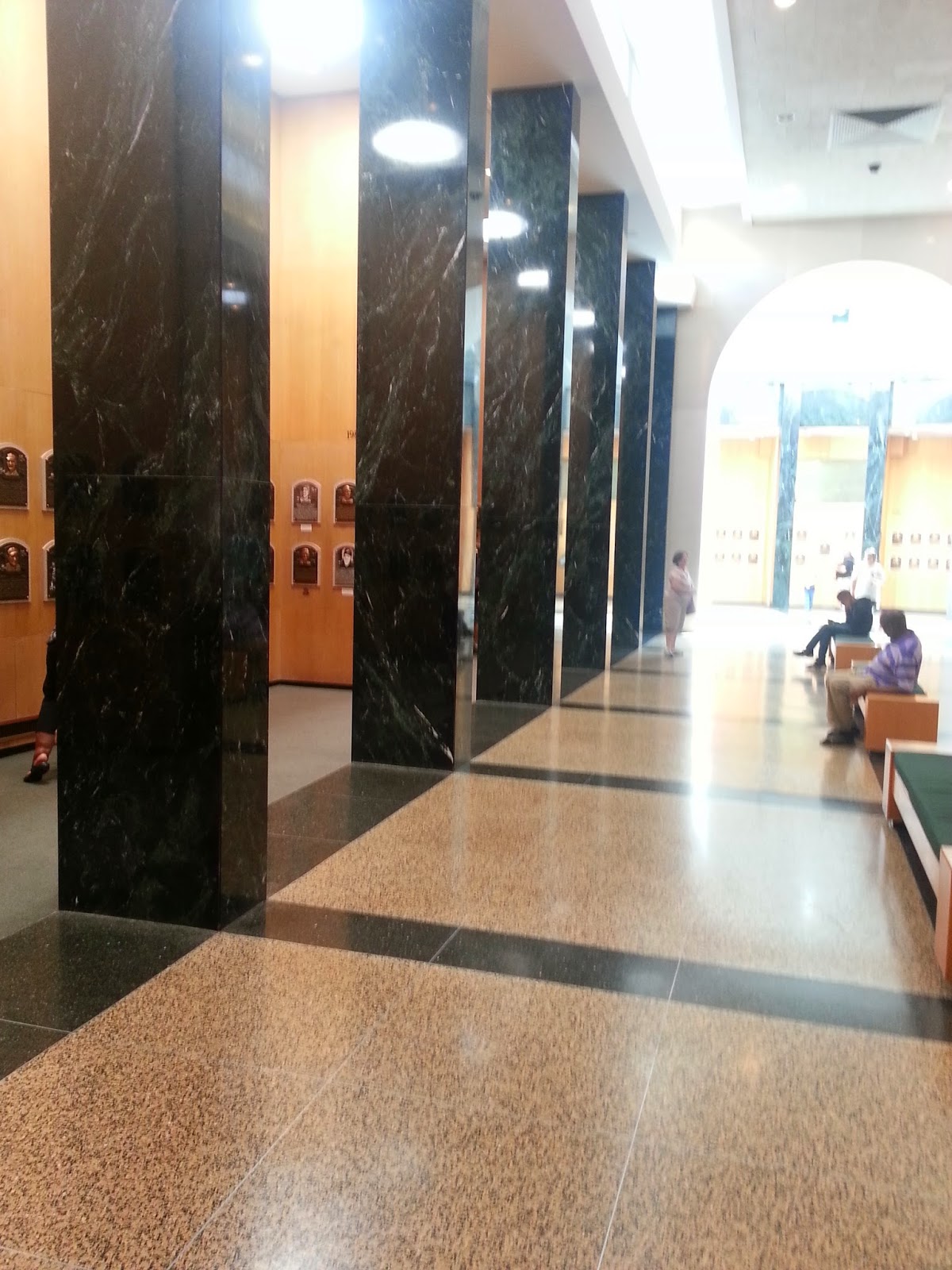 After a bit of searching, I succeeded in finding the plaque that I was most interested in! 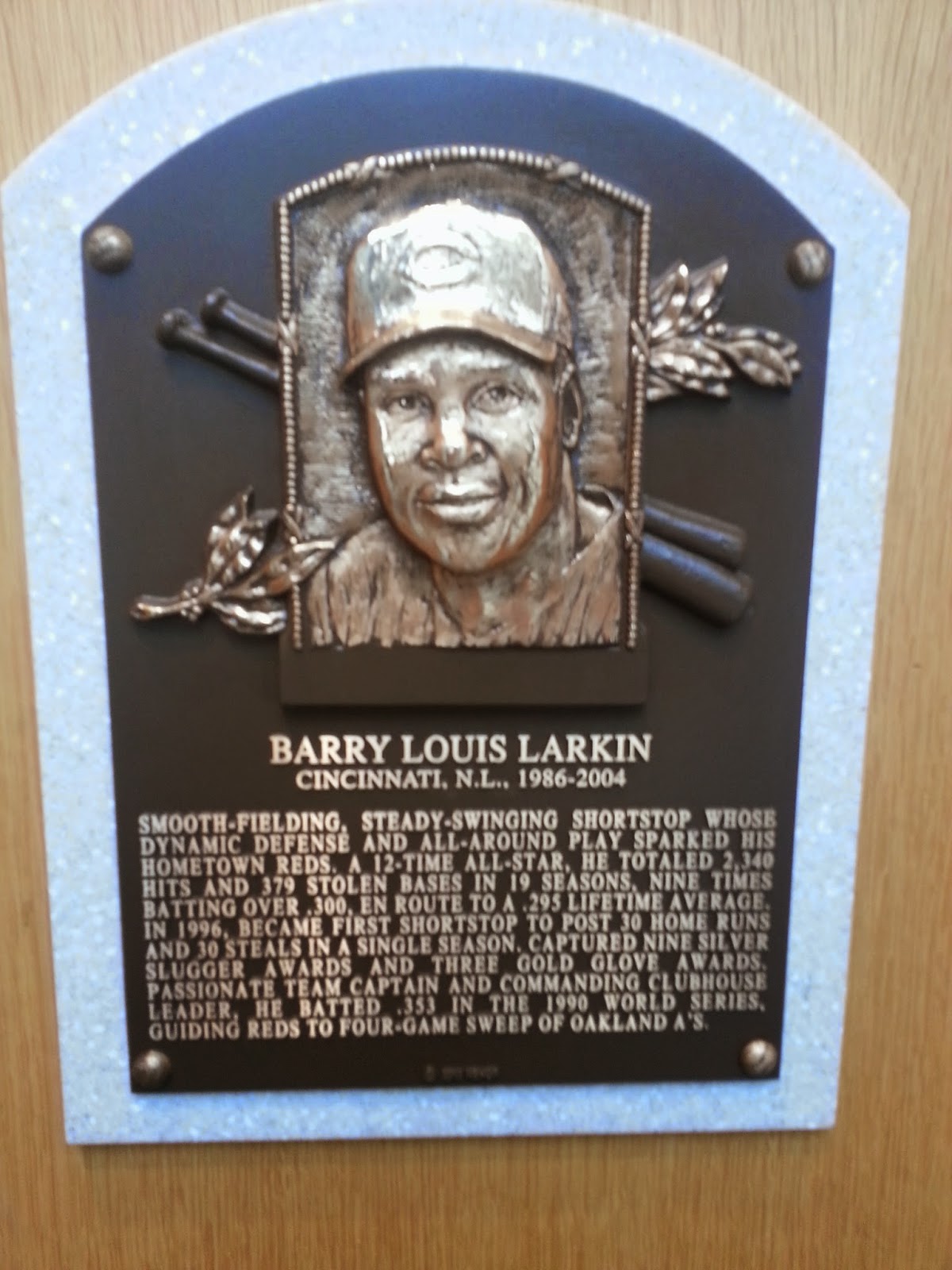 All told, I spent about two hours in the museum portion.  I didn't read every plaque or piece of information but I did do a fairly thorough job of exploring the Hall! 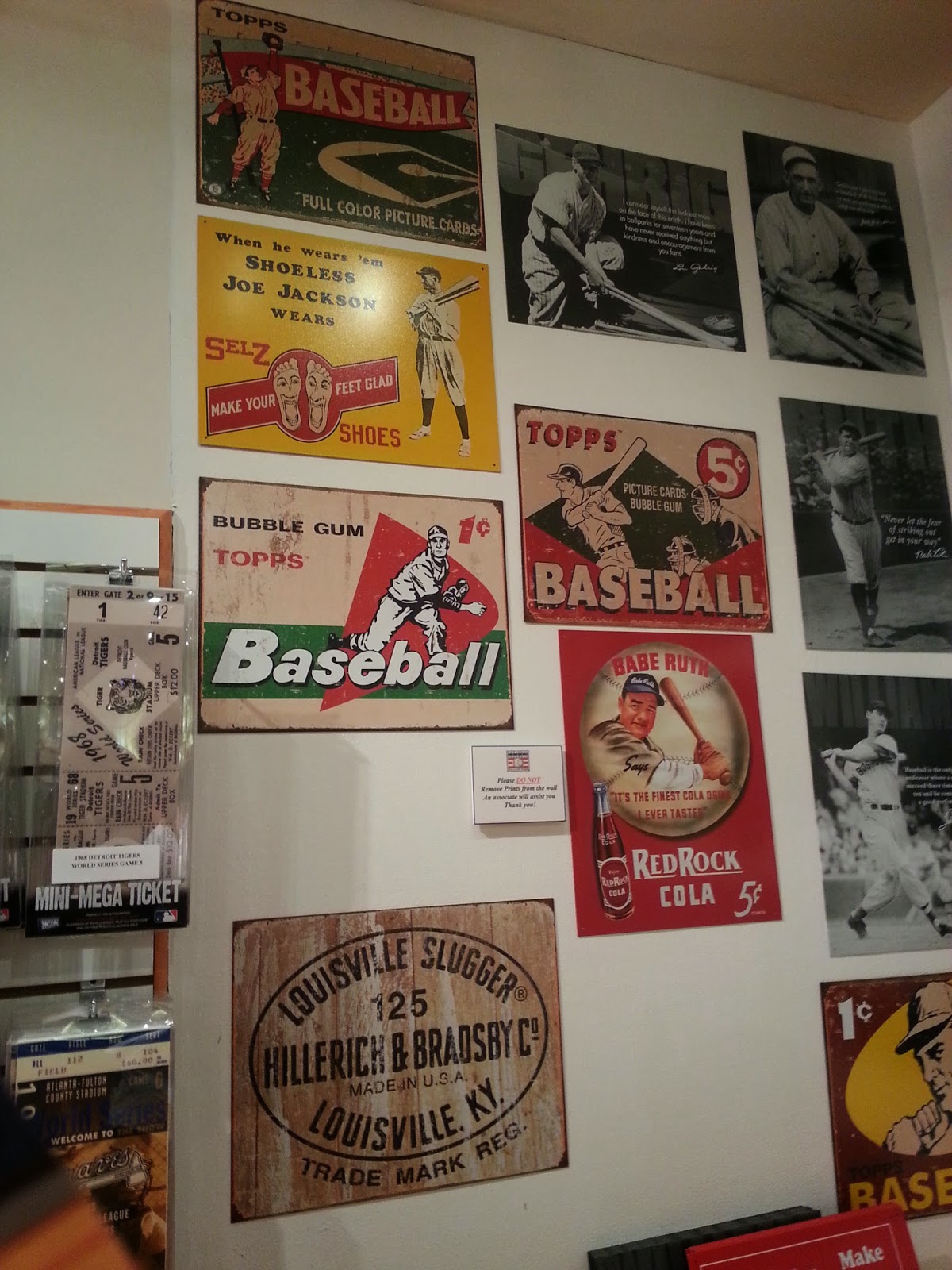 In the gift shop, I nabbed a Reds t-shirt (on sale!) and also one the tin signs you see on the wall (the wall showed all the signs there were to choose from).  I think the signs would make an awesome addition to my baseball card room - but at ten bucks a pop I only bought one.

Back outside of the museum, I did spend a bit of time walking down the main street of Cooperstown.  It's certainly a pretty town - though I can't imagine how crowded the place becomes during induction weekend! 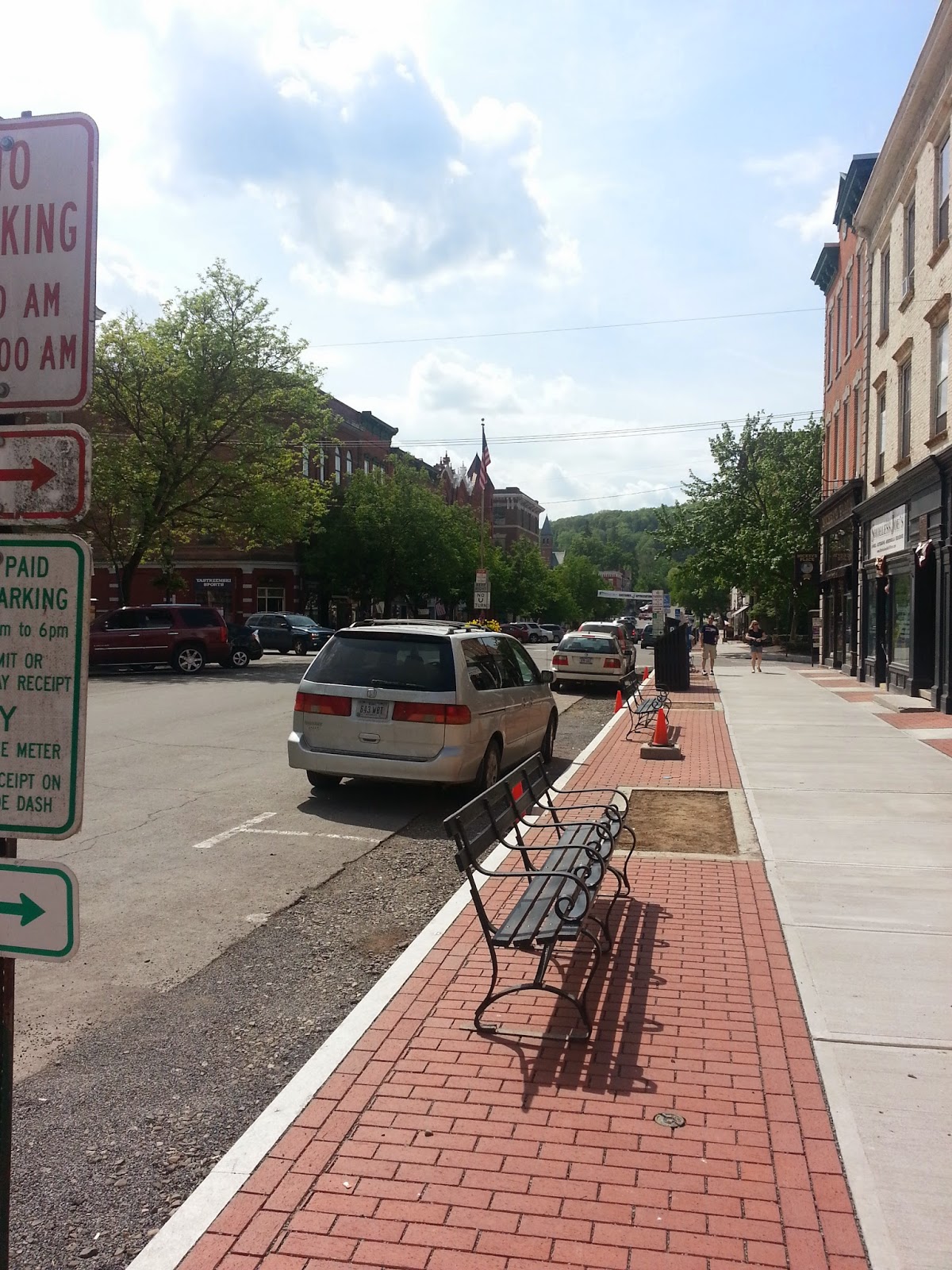 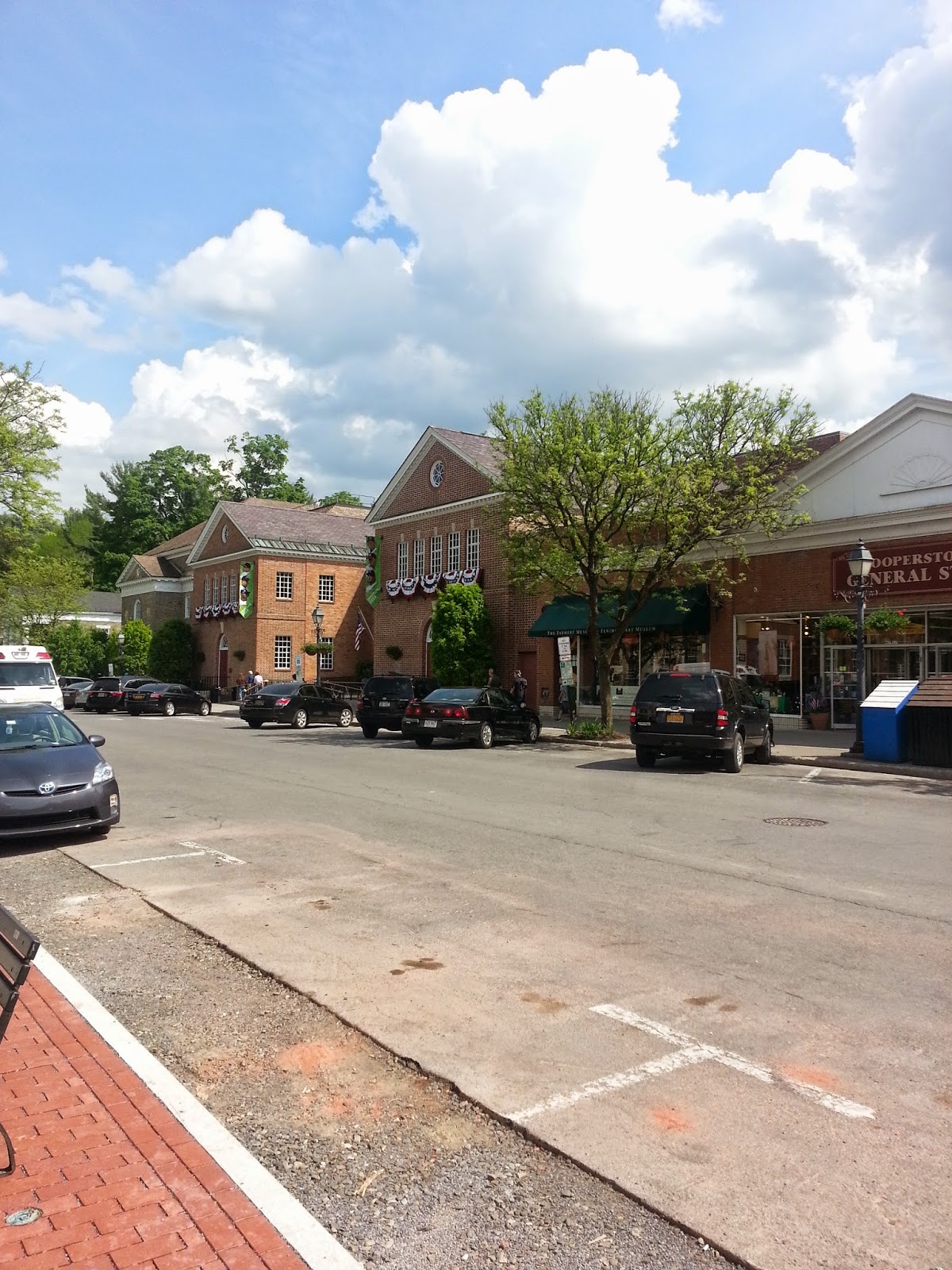 In case you get hungry, I can recommend Hey, Getcha Hot Dog! as a place to eat lunch... 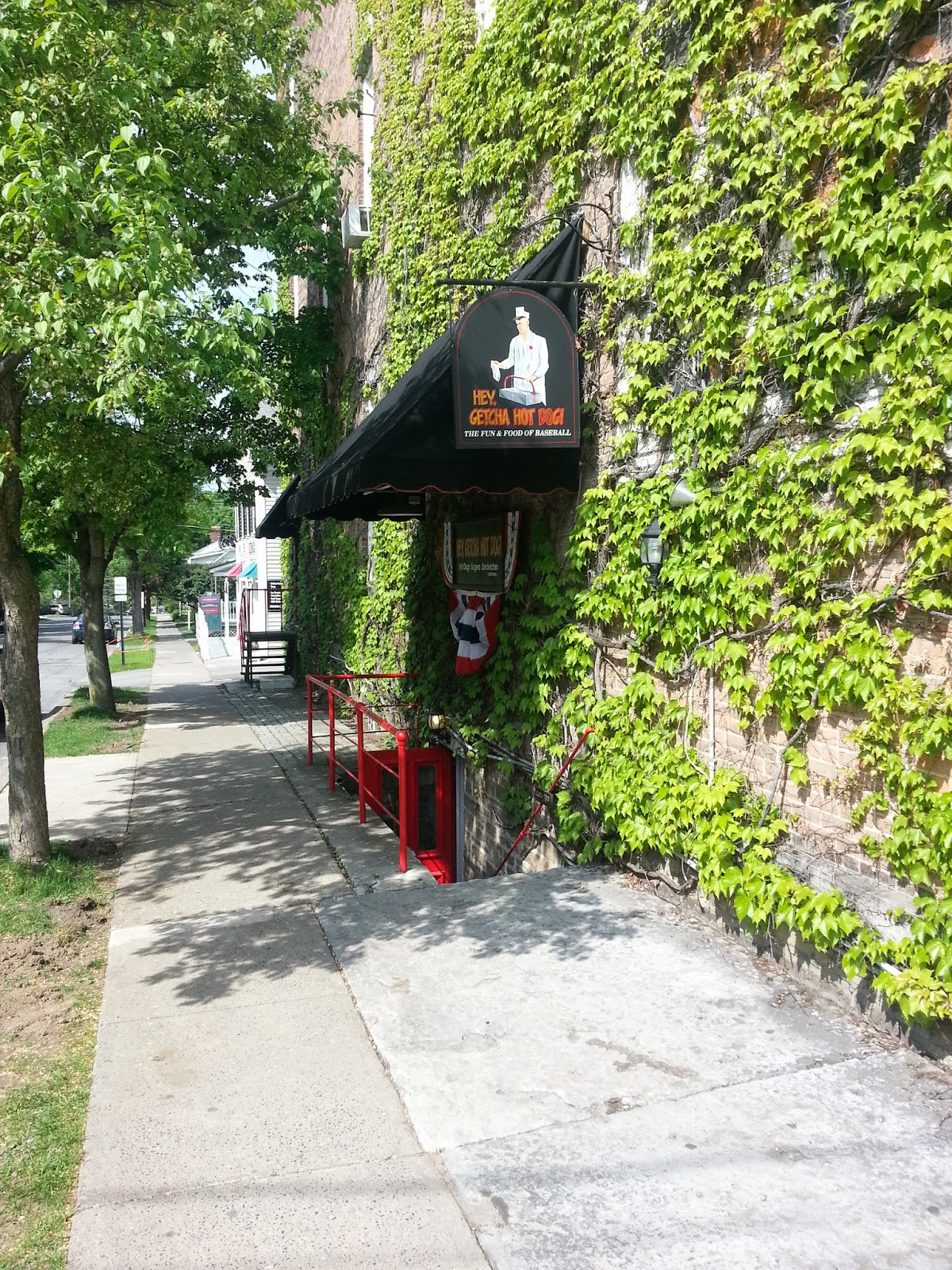 Finally, on my way back to my car I explored the Doubleday Field.  There weren't any games happening so the stadium was free and open to anyone who wanted to walk around. 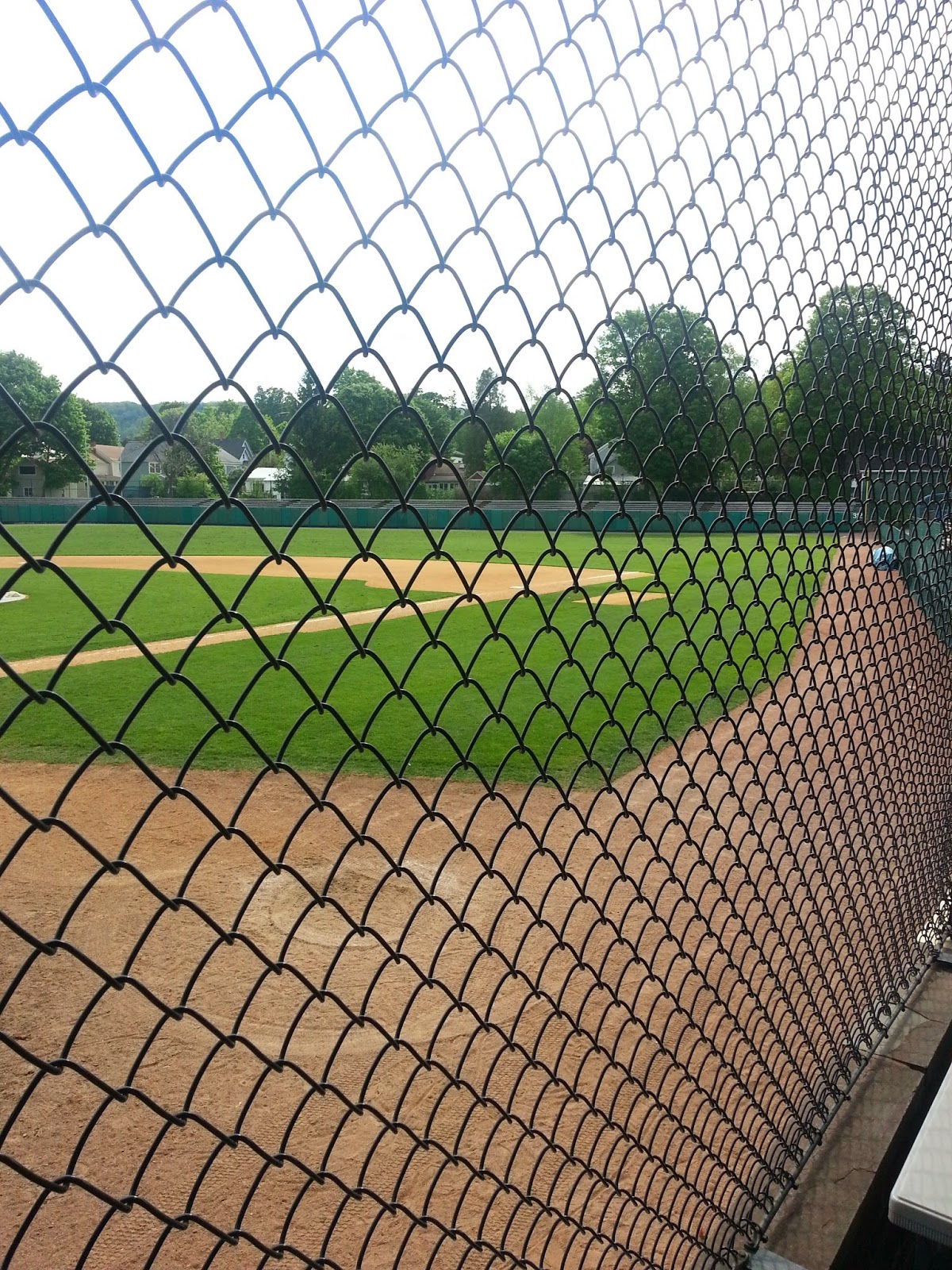 The stadium is extremely small - even the Little League World Series stadiums in Williamsport, PA dwarf Doubleday field (in terms of the stadium size - not the dimension of the outfield of course)!  My favorite part of the stadium was the old-timey labeling of the seats. 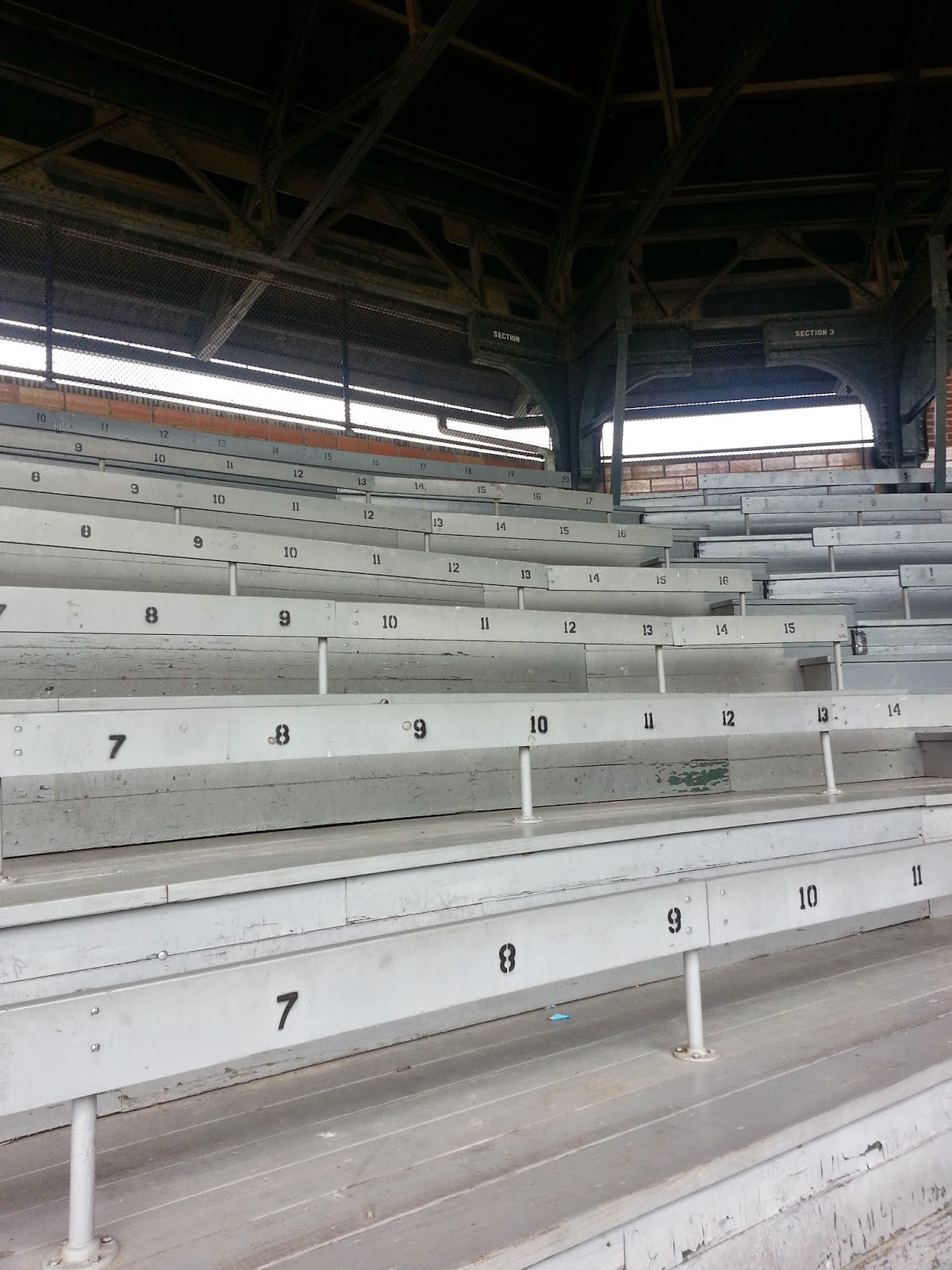 They don't look terribly comfortable for watching a full game - but they make for an excellent photo!

And with that, I hopped back in my car and made the drive back south to Oneonta for my meeting the next day.  I greatly enjoyed my time in Cooperstown - and if you haven't had the opportunity to go I would highly recommend it!
Baseball Hall of Fame Cooperstown Phlogging