on June 28, 2014
A couple of days ago I showcased a bunch of cards from last season's pack ripping and giveaway spectacular held by David over at Tribe Cards. In that post, I highlighted a bunch of players for whom I received exactly one card each.  Now, it's time to shift our attention to some of the players that showed up multiple times over the course of the season.

We begin our tour through the box with a pair of players that I actually ended up with two copies of the same card for each (with no other cards for either player): 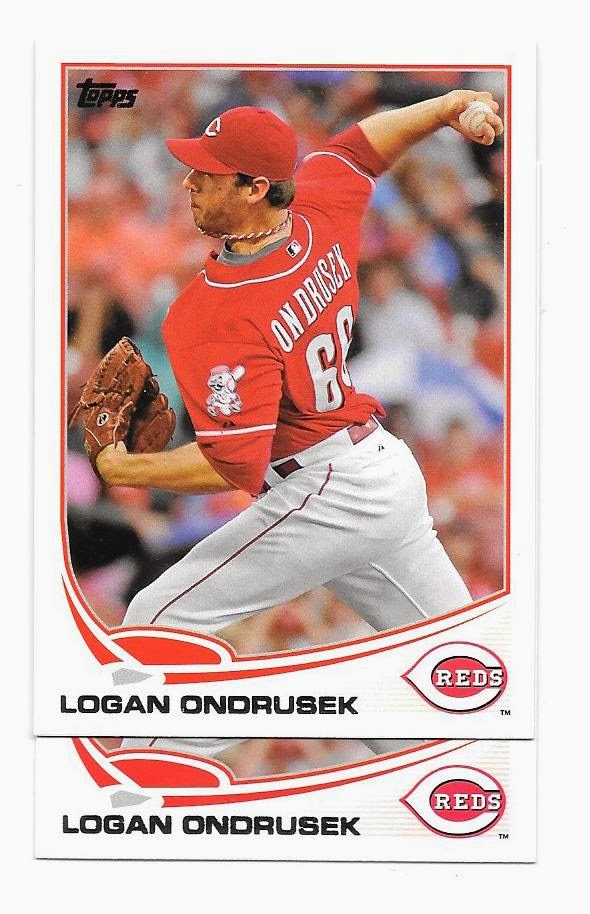 I chose Ondrusek because he was pretty good for the Reds over the past few years.  Unfortunately, he hasn't been nearly as good this year which has made me refer to him as Ondru-sucky instead.  I'm clever like that. 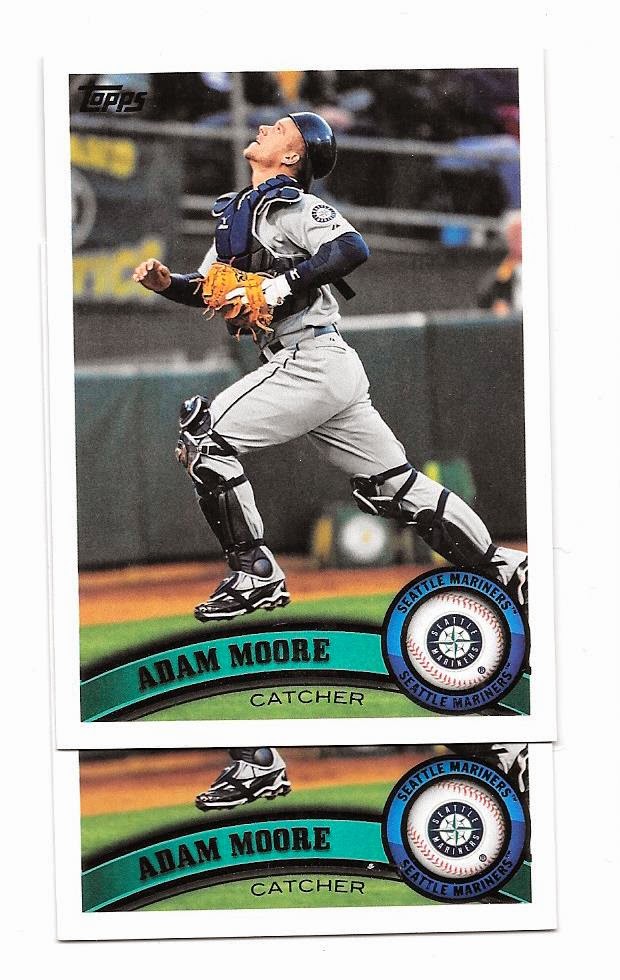 As for Adam Moore, I don't have any idea why I claimed the catcher from Seattle... 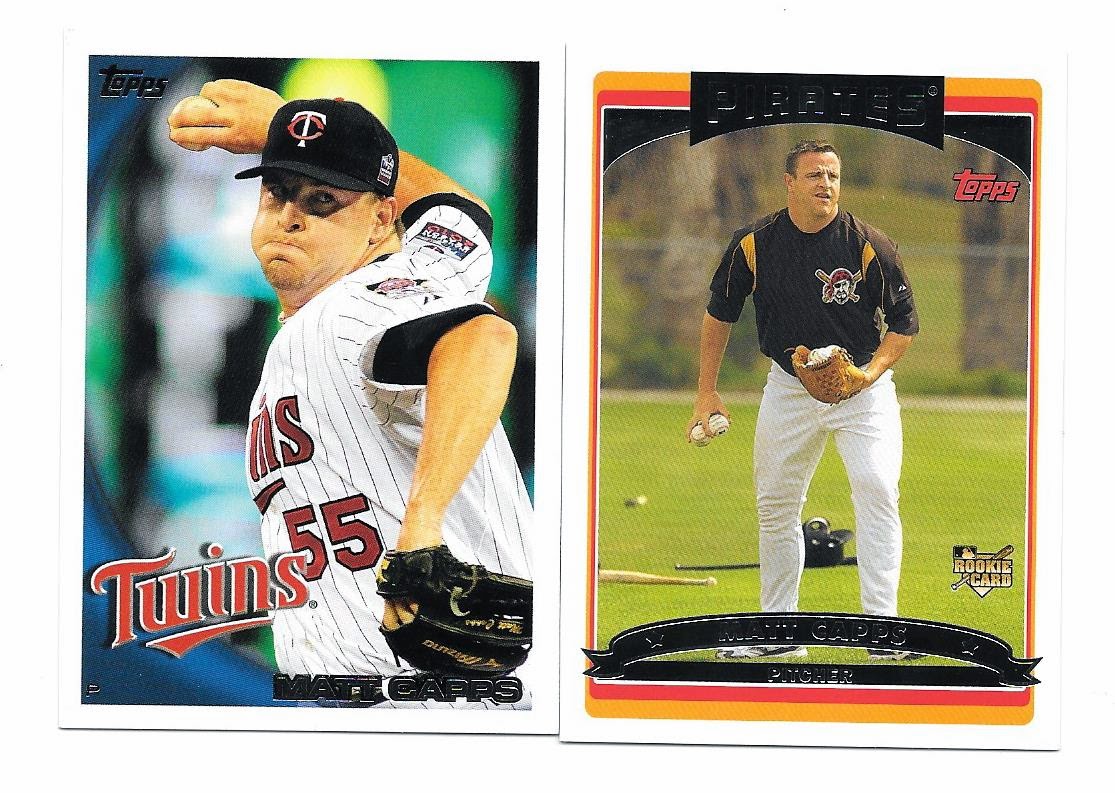 I claimed Capps because of his Pirates connection (though I ended up with a card of him as Twin and as a Pirate).  I actually love the Capps' rookie card - it's a cool shot of what I presume is batting practice. 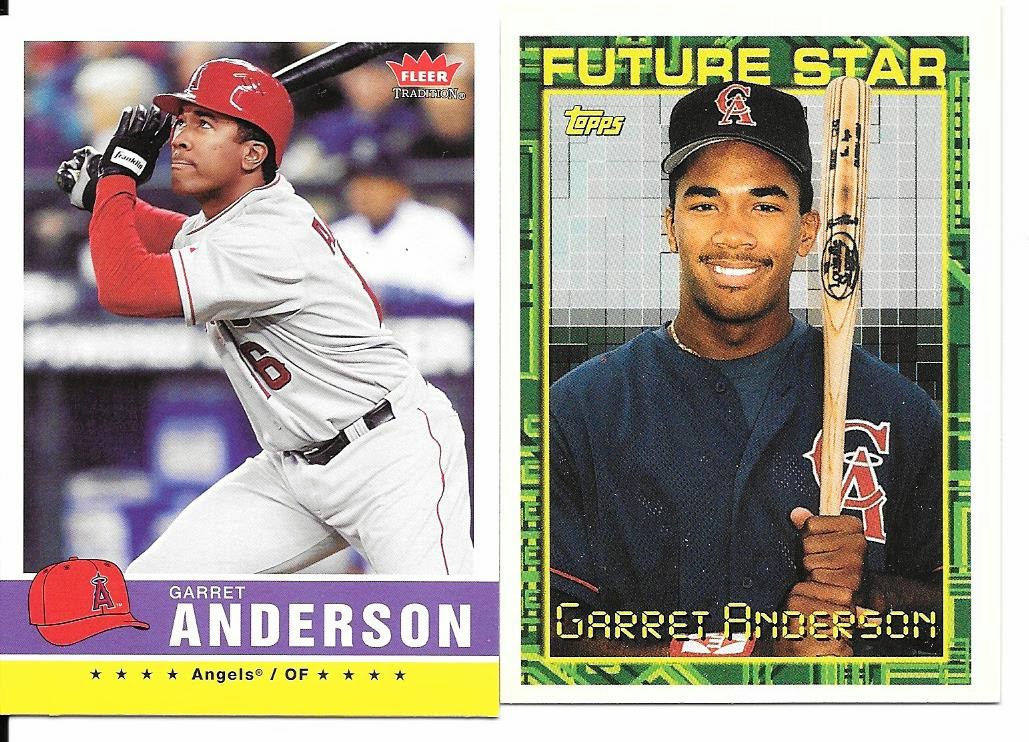 A pair of interesting cards though neither are surefire bets to become keeper cards for my collection.  The Future Stars subset that Topps did was cool at the time but I don't think particular design aged very well.  On the other hand, the Fleer Tradition design was supposed to be old fashioned and yet Fleer went with the super glossy cardstock (a big no no by them). 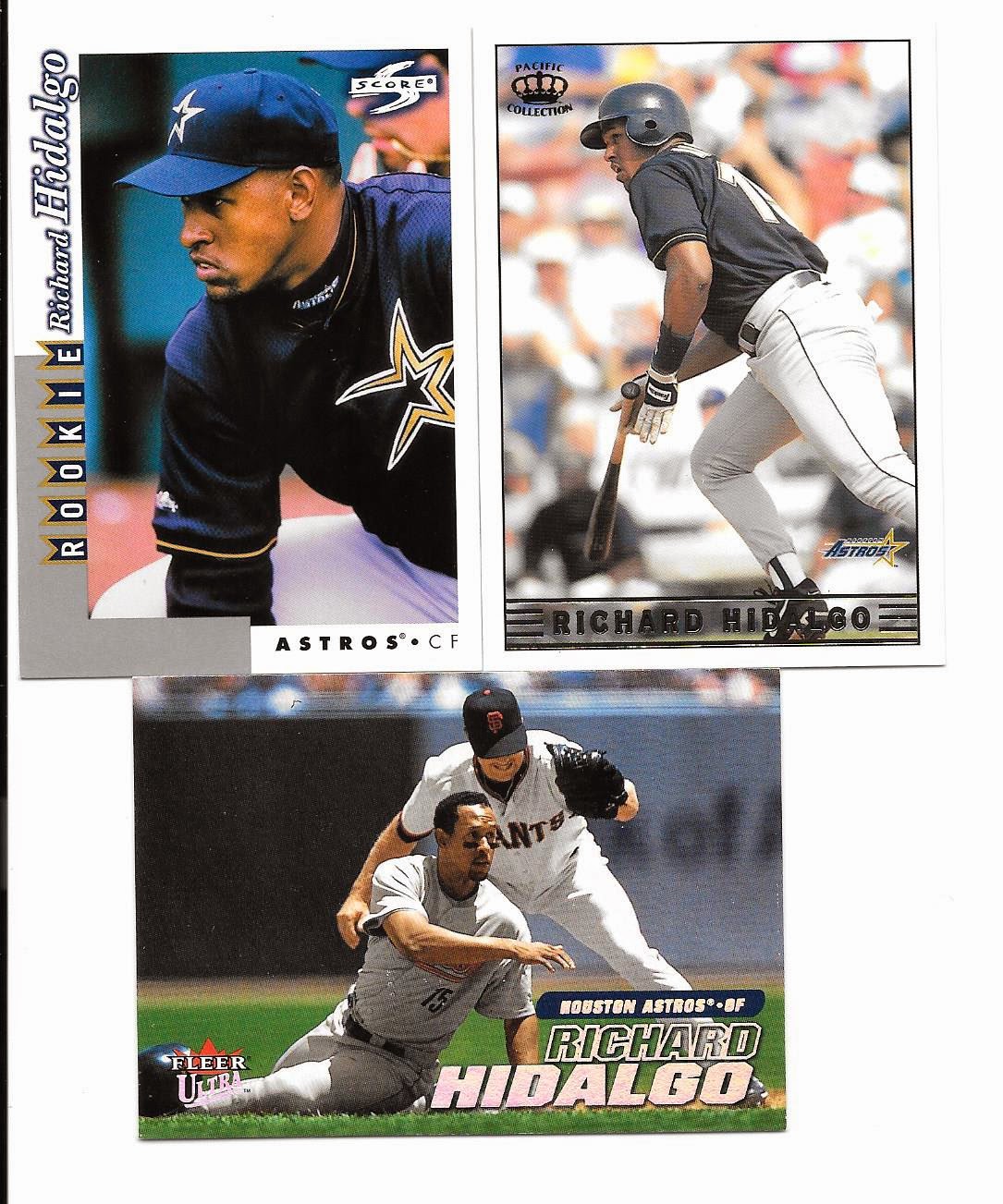 For a player that I don't collect, I have to say that Hidalgo ended up providing two of the better cards in the box.  First, one is a Pacific card which I automatically like (no questions asked)!  The other card that I like a lot is the Fleer Ultra horizonatl shot.  There aren't enough "staring at umpire hoping I'm called safe" cards out there - especially with a helmet two feet off the guys' head. 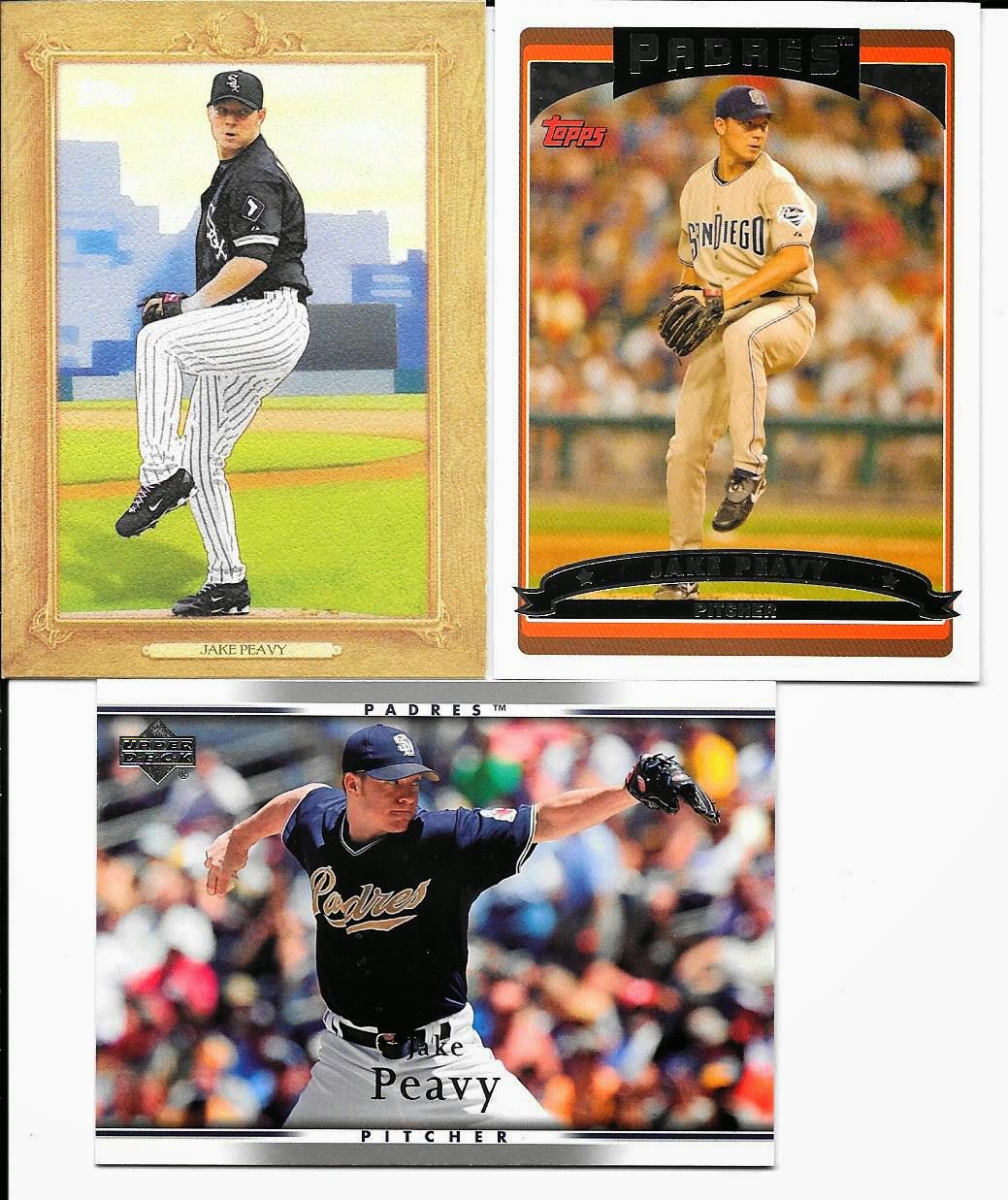 No one would confuse me for a Padres (or White Sox) fan, but I have always been a fan of Jake Peavy.  I happen to really like the Turkey Red card - the other two Peavy cards are alright but they pale in comparison to the grandeur that is Turkey Red. 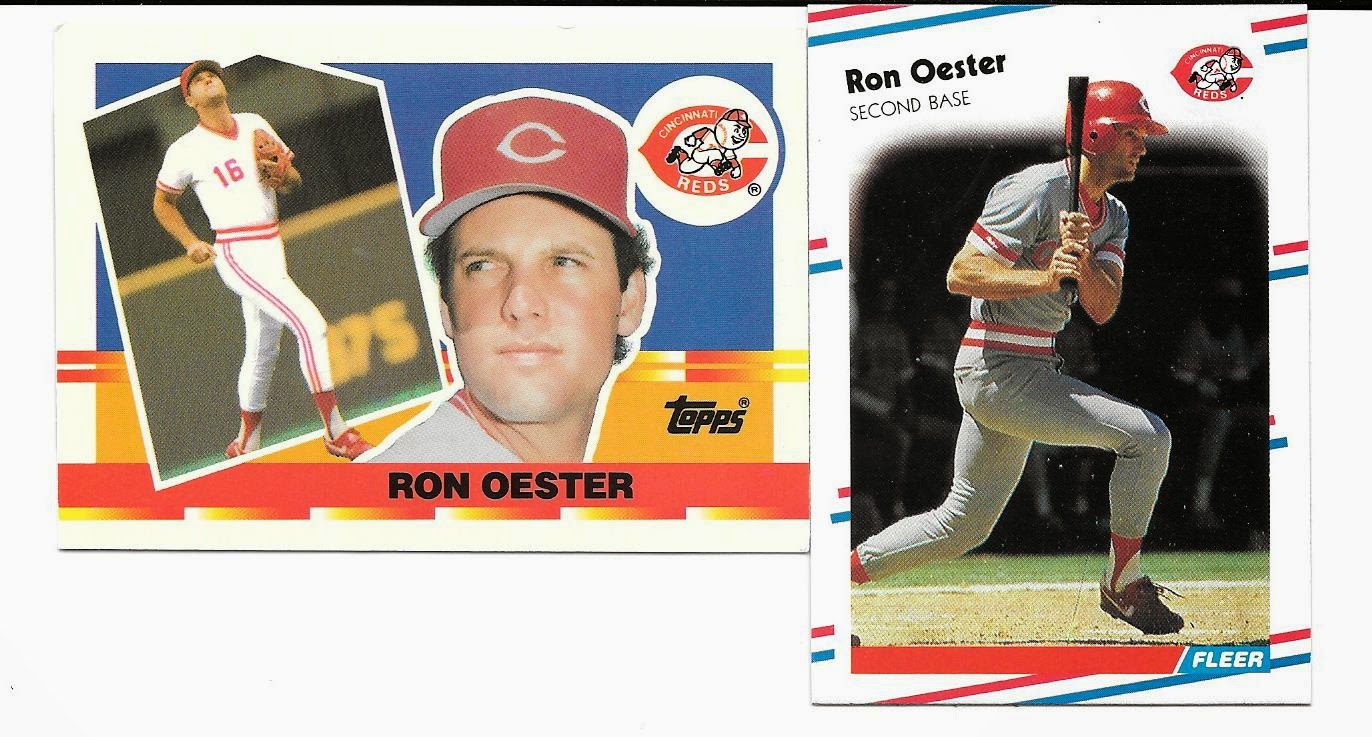 Because who doesn't want at least one Topps Big card in a trade package?!

A big thanks goes out to David for (once again) for hosting the awesome pack ripping draft!  I have at least one more post to go yet with cards from the box - I still haven't shown my favorite players that I claimed so stay tuned for that!