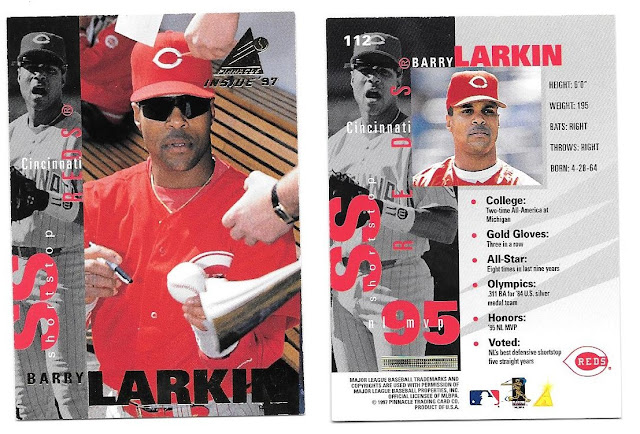 The 1997 Pinnacle Inside gimmick was that the cards were only available inside "cans" rather than packs.  I never held one of the cans in my own hands, but from what I've read you actually needed a can opener in order to get to the cards.  Imagine your disappointment after going through all that work to open the can when you are greeted with this vomit-inducing card design...

Seriously, this design is worse than the much-maligned 1995 Fleer set in my mind.  I don't have much good to say about this...and I hate the fact that the left side of both the front and back of the card use the same image plus schizophrenic font choices (and locations).  Unfortunately for me, there are still two more Barry Larkin parallels in the set that I need to track down (Club Edition seeded 1:7 cans and Diamond Edition seeded 1:63 cans).  There is also a single Barry Larkin insert (Dueling Dugouts in which Larkin shares his card with some guy named Derek Jeter).