Let's face it, for many of us the year 2016 kind of sucked.  Whether it was an over saturation of politics, seemingly half of the celebrities you know dying, or simply boring baseball card releases, the year 2016 will not go down as one of the best years of all time.  That said, there were a few highlights from the year in baseball cards.

First, Topps kept up with Allen & Ginter - and they did a decent job with this year's set.  Someday I should do a definitive ranking of all the Ginter editions...and when I do I don't expect that 2016 will be at the bottom.  That's a start.

Topps also tried something new with their flagship set design (borderless and smoky).  In my opinion, it didn't really work but I still credit Topps for trying something new.  After all, we can whine and complain about stagnation in the hobby if we don't give credit when credit is due for a company attempting change.

I also gathered that this year's edition of Topps Stadium Club was pretty nice...but I didn't buy any since I'm still working on the 2015 set.  From what I've seen of 2016 Topps Tek, that set looks nice (as usual) too...but there isn't any Larkins in the set so I sat that one out this year as well.

Therefore, with all that negativity you'd think I wouldn't even have a best card from 2016.  But you'd be wrong.  In fact, it was EASY picking out this year's best card.

And make it a relic. 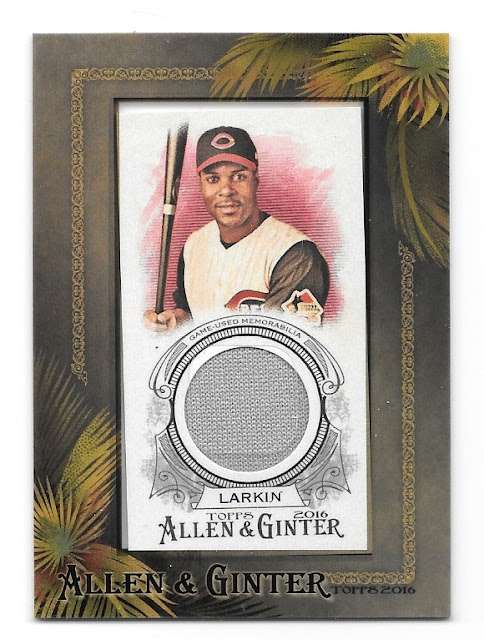 That's a 2016 Topps Allen & Ginter framed relic of none other than my favorite player, Barry Larkin.
Now, I did cheat and have to purchase the card off of eBay since I didn't get one in any of my Ginter boxes that I opened, but that's ok.  It was good enough that I took the time (and cash) to get it on eBay - and for 2016 baseball cards, that's saying something.

Editor's note:  Thanks to Eamus Catuli for the contest idea.
Eamus Catuli