on May 01, 2020
Welcome to the first of my Ultimate Ginter Mini Set Bracket posts!

The Allen & Ginter brand revival by Topps actually began with the initial set in 2006.  However, that first issue didn't actually have any proper mini inserts and so that set won't be considered for the Ultimate Ginter Mini Set Bracket.  Therefore, we move to the next year for our first three mini sets for consideration!

Flags of All Nations: 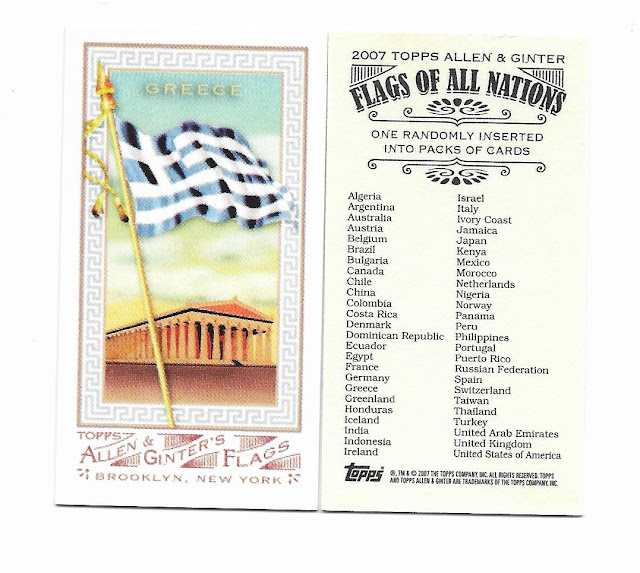 The Flags of All Nations insert set contained 50 different cards, each depicting the flag of the featured country.  The fronts of each flag card have the country's flag front and center but there is also imagery of other famous landmarks, sites, animals, or other country-specific items around the flag.  The backside of each card features the full checklist (in a style very similar to original Allen & Ginter cards from the 1800s).

The Flags of All Nations were the most common of the three mini insert sets.  They were seeded 1:12 packs (in both hobby and retail).  However, with 50 cards in the set in total is still a rather massive undertaking to collect them all!

For your consideration, the entire checklist for the Flags of All Nations set is below.  Loyal readers probably know that I'm big into collecting most sets in each year's edition of Allen & Ginter and the 2007 set is no different.  I'm actually still working on the 2007 Mini Flags set (I'm only missing two more cards:  Ireland and Iceland).  I've decided to use both bold and an asterisks (*) to denote cards that I'm missing.  Who knows, maybe all this research that I'm doing for this series of posts will also lead to me getting a bit closer to completing some of these mini sets?! 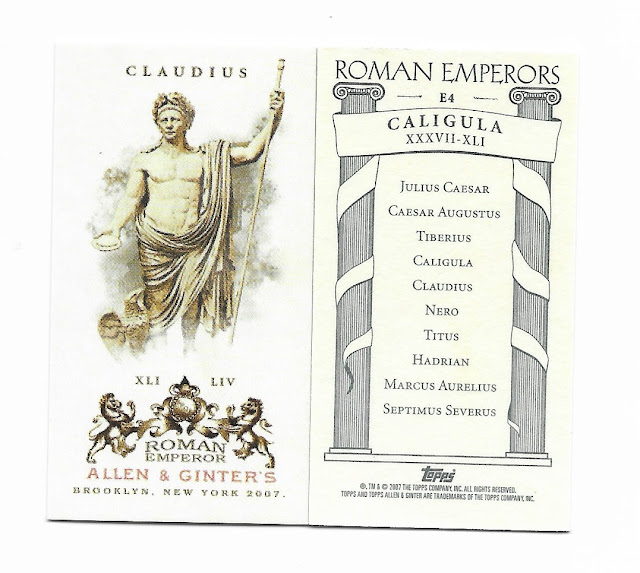 The Roman Emperors mini set is only ten cards in size.  The fronts of each card feature a bust of a given Roman Emperor while the backside features the full set checklist (again, in the style of the original A&G mini cards from the 1800s).  As with the Flags of All Nations, the Roman Emperor set is another set that I haven't quite finished (I'm missing two cards from this set as well:  Julius Caesar and Nero).

The Roman Emperors set was the second hardest mini set to find in 2007.  The cards were seeded 1:72 packs* (both retail and hobby).  That means you'd expect to find one Roman Emperor for every three hobby boxes you opened!

*It should be noted that the Roman Emperors set was a "stealth" mini set meaning that Topps did not include the set (or the odds of pulling cards from the set) in its official documentation.  As you'll see throughout the Allen & Ginter series, Topps is known for creating at least one "stealth" mini set each year, it's something that collectors have come to expect (and love). 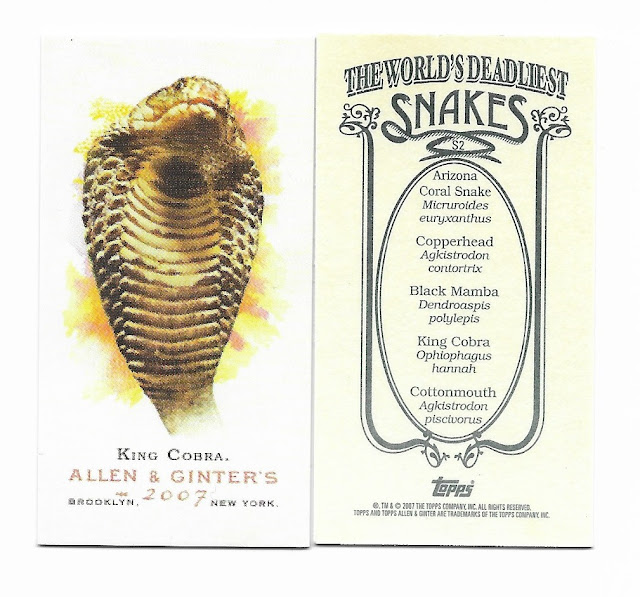 The World's Deadliest Snakes mini set is the smallest of the three mini sets in 2007.  It contains only five cards.  Like the other two mini sets, the design here features the snake image on the card front and then the full set checklist on the reverse side.  I'm still missing three of the five snake cards (Arizona Coral Snake, Black Mamba, and Cottonmouth).  As you can see, my 2007 mini collection isn't quite complete but I'm only seven cards away from having the entire thing done so I guess I'm doing okay in my collection!

The Snakes mini insert set were seeded two per case*  (1:144 packs retail and hobby) making them extremely rare to find in the wild (perhaps even rarer to find "in the wild" than the actual snakes featured within the set)!   *Like the Roman Emperors set, the Snakes mini set was another "stealth" insert set meaning the exact odds were never officially published.  I originally thought that the Snakes were true case hits but Baseballcardpedia has them seeded at two per case (which is what I'm going with here).  Either way, the cards are quite rare!

Speaking of the checklist, here it is:

That's only three mini sets issued in 2007.  Don't worry, other years will have plenty more sets to choose from - but I think for the first year of having mini sets, the 2007 offerings are quite strong.  I have no idea which set will come out on top here in the public vote so let's get right to it!

The poll doesn't seem to be working correctly for some so let's do all voting via the comment section.  It'll be a little more labor intensive for me but that's okay!  Make sure to leave your vote in the comments below!

Thanks for voting and come back soon for a look at the next year's offering from Allen & Ginter!
Allen and Ginter 2007 Ultimate Ginter Mini Set Bracket