The 2014 Allen & Ginter set stays consistent in regards to the total number of mini insert sets (eight) which is the same as the previous three years.  What's different this time around is that there are a total of 123 minis to collect...but six of those minis were only available if you bought special binder packages directly from Topps (Into the Unknown #ITU-16 Hernan Cortes, Larger Than Life #LTL-12 Pocahontas, Little Lions #LL-16 Turkish Van, Outlaws, Bandits & All-Around Ne'er Do Wells #OBA-11 Ned Kelly, Where Nature Ends #WNE-26 Jan Vermeer, and World's Deadliest Predators #WPD-22 Cone Snail).  I suppose one could simply ignore the six special cards since they are all numbered at the end of each respective set but I've decided to include them in the checklists below (in part because I did eventually acquire all of them myself, though I didn't actually buy the special binders).

With that out of the way, let's update our running tally of mini sets and the total number of mini cards in each year's edition of Allen & Ginter:
Now, let's take a look at the mini sets for 2014! 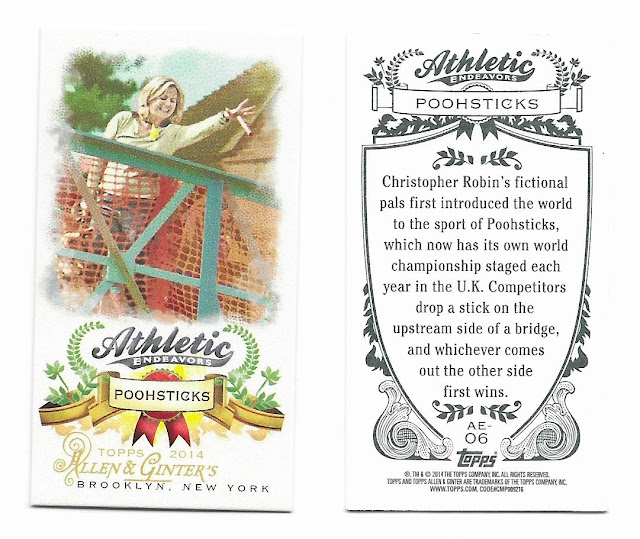 The case hit for 2014 minis, Athletic Endeavors celebrate some of the goofier "sports" you might find, the sort of things that might be on ESPN the Ocho (or whatever they called that channel).  I only have one card from this set and, to be honest, I'm thinking about selling/trading it rather than spending fruitless hours (and dollars) attempting to acquire the other nine.  At least for the moment I have something to scan for the post!  As usual, I'll denote the cards I need with an asterisks(*) and bold font. 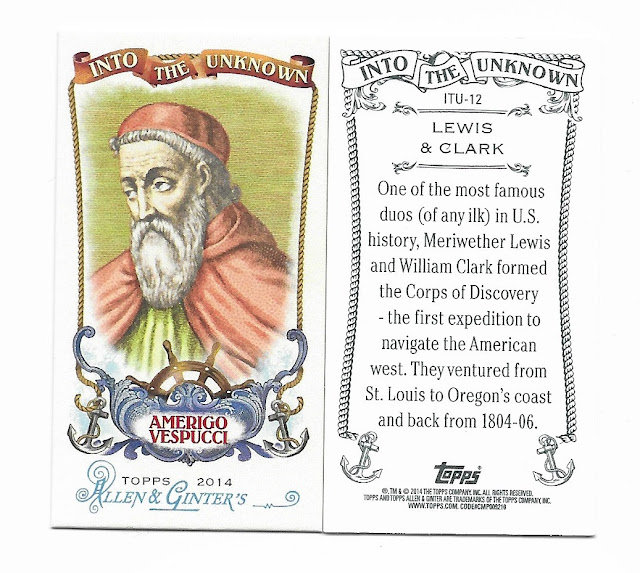 Allen & Ginter has had a couple of sets dedicated to sailors and pirates but this is the first mini set to celebrate (mostly) people who had to trek across the land to discover new places.  The first 15 cards in this insert set could be found in packs of Allen & Ginter while the final card of the set (Cortes) was only found in those special binders sold by Topps that I mentioned previously in the post. 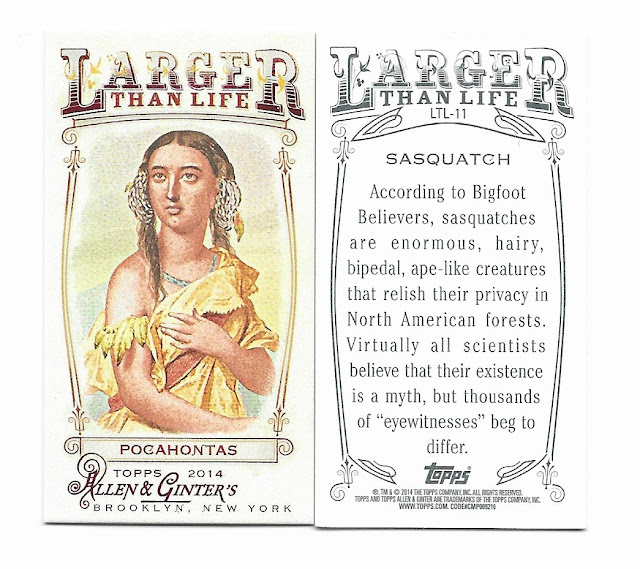 I'm reading a book right now all about Greek mythology so the idea of "larger than life" characters kind of appeals to me currently.  This particular set is basically an "American mythology" set.  I say mythology because the best myths usually combine elements of truth along with elements of the gods/supernatural/etc.  One could argue that many of the subjects in this set fit into the mythology mold.  One that doesn't quite fit that would be Pocahontas but she's one of the six cards you could only acquire via binder purchases so she's only sort of, kind of a member of this set. 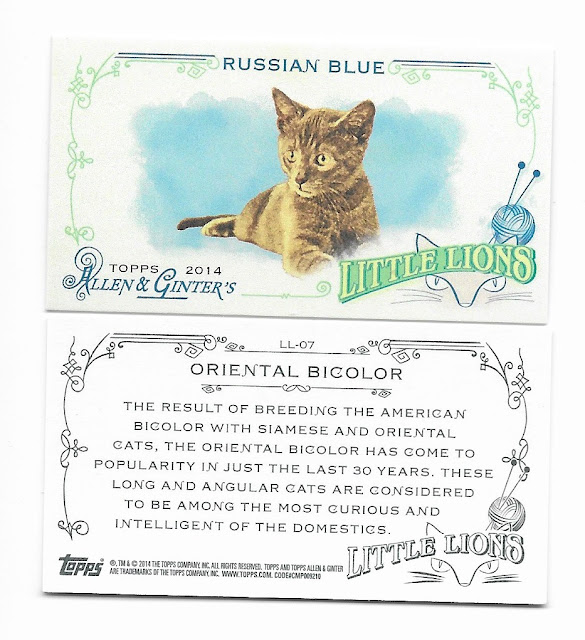 Are you a cat person?  If so, then Little Lions might be perfect for you.  I've tried hard not to put too much of my own thoughts in my year-by-year write ups (I'll be saving my own opinions on the various sets for when the actual bracket starts).  I don't want to sway the vote in any way for now.  But for this set, I will say that since I'm mildly allergic to cats I probably won't be voting for Little Lions as my favorite set any time soon!  Also, the 16th card in this set is another binder only card. 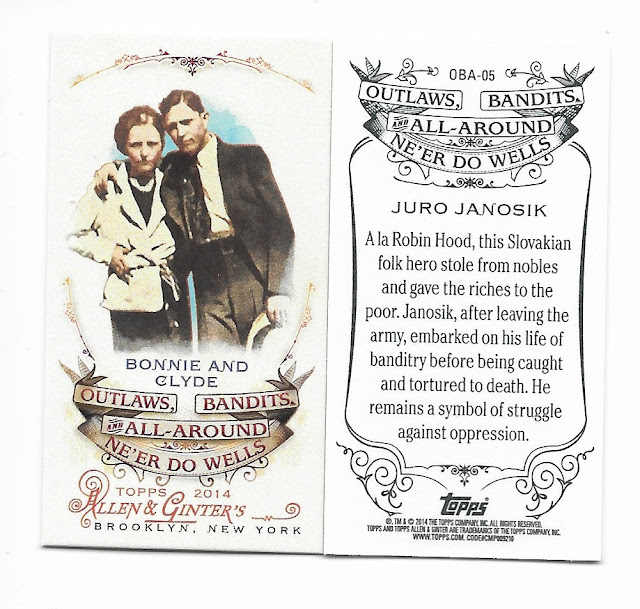 All sorts of ruffians make up this particular mini set (with the final card once again being a binder only card).  I don't usually put Robin Hood, Bonnie and Clyde, and Blackbeard all in the same category of human being but I guess it's all based on your perspective (at least in the case of Robin Hood and Blackbeard). 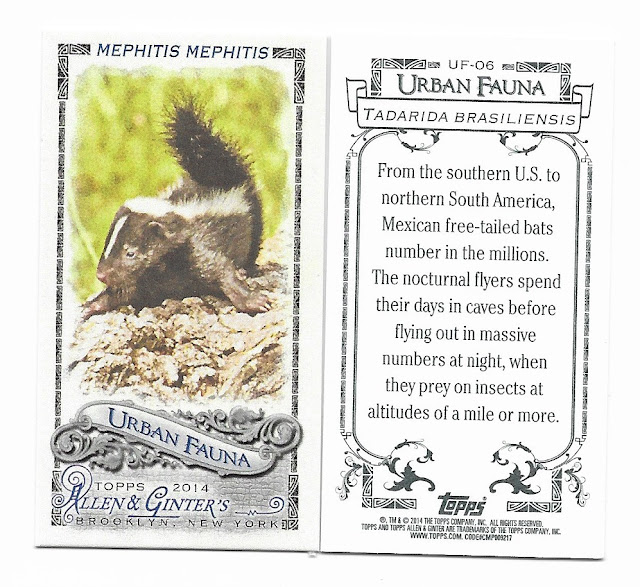 This is the only other mini set that I haven't completed from 2014 Allen & Ginter (with the Athletic Endeavors being the other which I already discussed).  I didn't do well with either of the rare mini insert sets in 2014, only 1 Athletic card and only 4 of the Urban Fauna.  If I'm being honest, this is another set that I may simply give up on trying to complete. 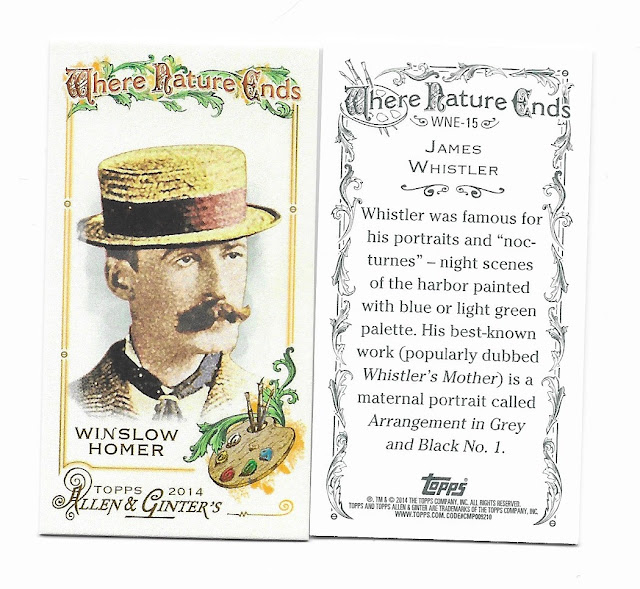 Where Nature Ends is the largest of the mini insert sets for 2014 (25 cards plus the one extra from the binders).  The set is full of all sorts of artists, though I must admit that I don't get the reference for "where nature ends" as it relates to artists.  Also, I find it amusing that Topps made the first four artists in the set the four that the Teenage Mutant Ninja Turtles were named after.  There's no way that is a coincidence, right? 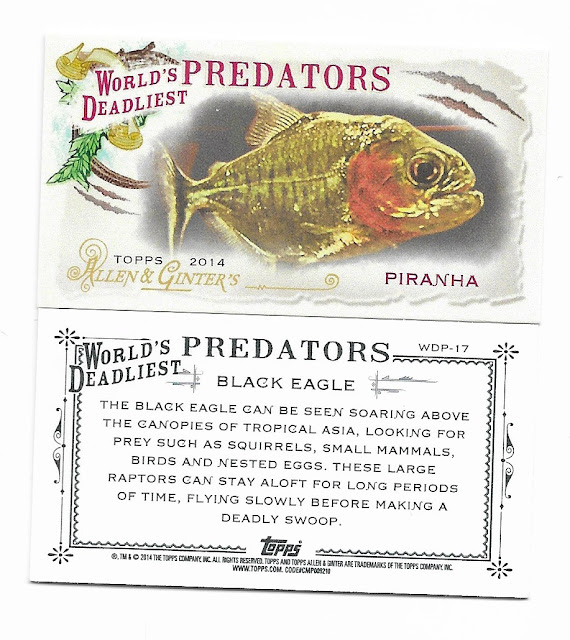 And finally, we reach the last set for 2014:  World's Deadliest Predators.  By 2014, Topps had done a number of insert sets featuring dangerous animals but this was the first to have animals of all types included (bears, alligators, birds, lions, snakes, etc. all in one set).  The Cone Snail (card #22) was the binder only card.

Now it is your turn!  Leave a comment below with your favorite mini set from 2014.  We are getting closer and closer to having our final bracket seeding all set - your favorite insert set needs your vote!
Allen and Ginter 2014 Ultimate Ginter Mini Set Bracket