The 2016 Topps Allen & Ginter set shook things up quite radically from the previous number of years of Allen & Ginter releases.  For starters, after having 8 different mini insert sets to collect from 2011 - 2015, in 2016 Topps cut the number of sets back to only 6 (with one of those sets containing only a single card).  Topps also cut down on the total number of mini cards to find with the lowest total since 2011.
With that out of the way, let's update our running tally of mini sets and the total number of mini cards in each year's edition of Allen & Ginter:
Now, let's take a look at the mini sets for 2016!
Ferocious Felines 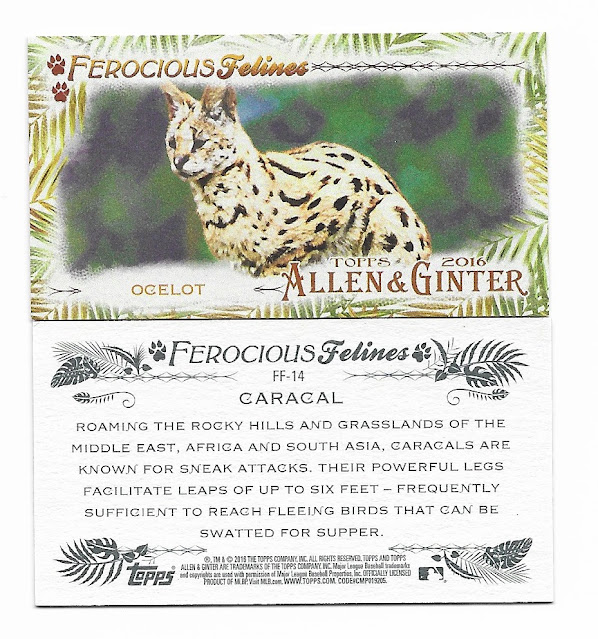 In 2016, there were essentially four "common" mini insert sets but they were seeded at different insertion rates.  For the Ferocious Felines, the stated pack odds were 1:25 packs or just less than one per hobby box.  That probably helps to explain why I'm still missing three of the cards for my own set (as usual, cards I need are marked in both bold and with an asterisks in the checklist below).
Checklist:
FF-1 Bengal Tiger*
FF-2 Clouded Leopard
FF-3 Canadian Lynx
FF-4 Jaguar
FF-5 African Lion*
FF-6 North American Cougar*
FF-7 South African Cheetah
FF-8 Cheetah
FF-9 Classic Tabby
FF-10 Sand Cat
FF-11 Manx Cat
FF-12 Serval
FF-13 Ocelot
FF-14 Caracal
FF-15 Siberian Tiger
Greenland Explorer
Note:  No image since I don't own this card.
You'll notice in the above note that I say "this card."  That's because the Greenland Explorer was a single card that was inserted as a stealth insert in packs of 2016 Allen & Ginter.  The card was seeded an insane 1:26,436 hobby packs according to a pack wrapper that I saved from 2016!  The Greenland Explorer set/card is one that I have no plans to ever try and complete.
Checklist:
GE Greenland Explorer
Laureates of Peace 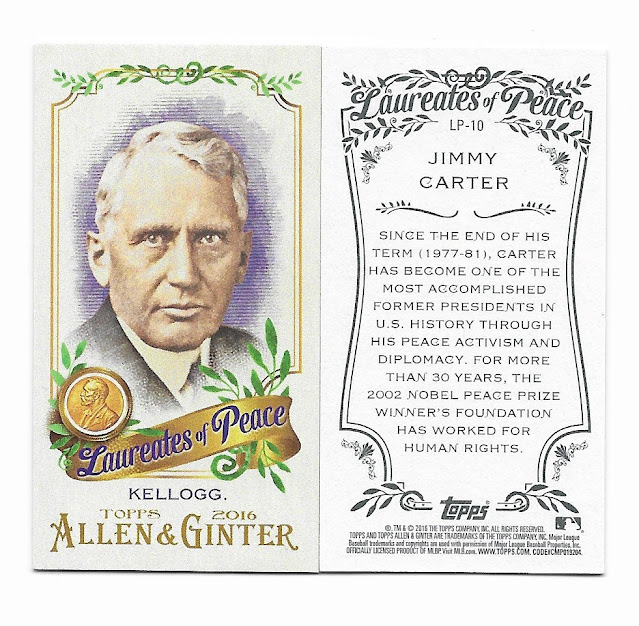 Our second of the common mini inserts, the Laureates of Peace cards were seeded 1:38 packs or slightly more common than one in every two boxes.  Despite lowering the total number of mini sets (and total number of minis), Topps made actually collecting most of the mini sets much, much more difficult!  So difficult, in fact, that I'm still actively seeking two more cards from this measly ten card set...
Checklist:
LP-1 Martin Luther King, Jr.*
LP-2 Nelson Mandela
LP-3 Baron Philip Noel-Baker
LP-4 Ralph Bunche*
LP-5 Henry Dunant
LP-6 Malala Yousafzai
LP-7 Shirin Ebadi
LP-8 Jane Addams
LP-9 Frank B. Kellogg
LP-10 Jimmy Carter
Skippers
Note:  No image since I don't own any of these.
The Skippers insert set was a case hit (1:288 packs) back in 2016.  While that may sound okay at first glance, it's actually awful for set collectors since Topps made a card for each of the 30 big league clubs.  In the boxes that I ripped back in 2016, I didn't pull a single Skipper card...and after leaving this set on my want list for a couple of years without receiving a single card or even trade proposal, I decided to give up on trying to collect it.  Looking back, I definitely made the right move here since the cards are both super rare and super expensive these days (at the time of writing this post there were four different Skipper cards for sale on COMC - one, Mike Sciosca, was "only" $17.62 while the rest were $46 and up).
Checklist:
S-1 Pete Mackanin
S-2 Bryan Price
S-3 Dave Roberts
S-4 Robin Ventura
S-5 Terry Collins
S-6 Craig Counsell
S-7 Mike Matheny
S-8 Joe Maddon
S-9 Jeff Banister
S-10 Dusty Baker
S-11 Buck Showalter
S-12 Mike Scioscia
S-13 Andy Green
S-14 Brad Ausmus
S-15 A.J. Hinch
S-16 Walt Weiss
S-17 Bruce Bochy
S-18 John Gibbons
S-19 Paul Molitor
S-20 Fredi Gonzalez
S-21 Soctt Servais
S-22 Terry Francona
S-23 Chip Hale
S-24 John Farrell
S-25 Kevin Cash
S-26 Clint Hurdle
S-27 Bob Melvin
S-28 Don Mattingly
S-29 Joe Girardi
S-30 Ned Yost
Subways & Streetcars 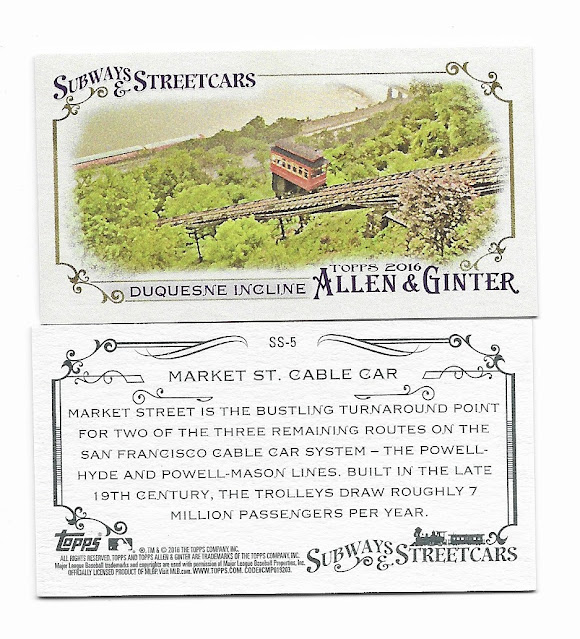 The third of the more common mini sets is the Subways & Streetcars set.  Seeded 1:25 packs, this set is just as rare as the Ferocious Felines in terms of seeding odds but the set is smaller in total size which means this set is actually a bit easier to complete if you are trying to do so simply by buying packs (a bad idea, by the way).  My Subways & Streetcars set is complete though I've often wondered why Topps stopped this set at 12 cards rather than their usual 15?
Checklist:
SS-1 7 Train
SS-2 Red Line
SS-3 Metromover
SS-4 Duquesne Incline
SS-5 Market St. Cable Car
SS-6 Duck Boat
SS-7 Passenger Train
SS-8 Aerial Tram
SS-9 Motorcycle
SS-10 City Bus
SS-11 R.V.
SS-12 Bikeshare
US Mayors 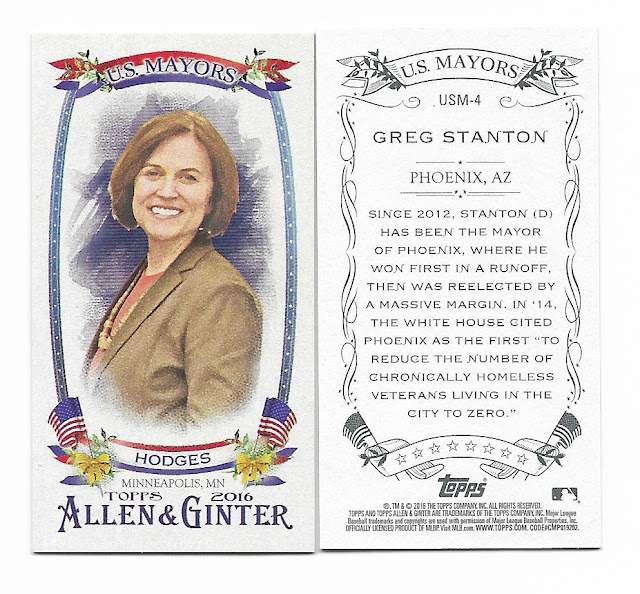