I must admit, these Seeding Vote posts have been way more work (and taken way more time) than I was anticipating at the outset of this project.  That being said, I think the time has been worthwhile, there's been plenty of fun comments and I've enjoyed reading about people finding out about cards (or even full sets) that they now want to try and collect!  Heck, even I learned about some new mini Ginter cards that I hadn't known about previously!
That all being said, we are nearly done with our seeding posts - only this one for 2018 and then one more for 2019!  At this point, I'm definitely looking forward to the mini bracket, this should be like an amped up March Madness style tournament and I can't wait to see how it all shakes out!
With that out of the way, let's update our running tally of mini sets and the total number of mini cards in each year's edition of Allen & Ginter:
Now, let's take a look at the mini sets for 2018!
Baseball Superstitions 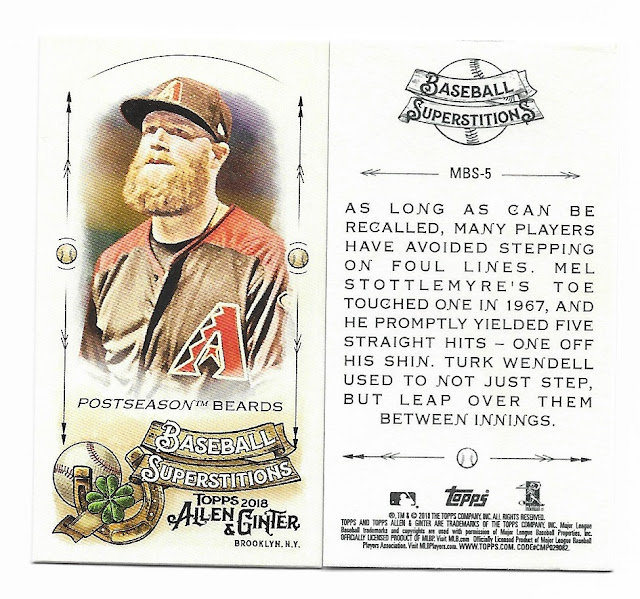 One thing that I've done throughout all of my Seeding Vote posts is try and highlight which sets I've personally collected as well as which cards I still need for sets that I'm actively working on.  For the most part, my needs have been fairly modest - including many years for which I'm actually done with Ginter minis!  Unfortunately, that won't be true for this particular post.  Out of all the years of Allen & Ginter, the 2018 set is by far the set that I've done the worst on in terms of collecting everything.  Heck, I haven't even finished off the full-sized inserts for this set and those are basically a dime a dozen typically!  As usual, I'll denote the cards that I'm still looking to acquire with both bold text and an asterisk(*) in the checklist.  Expect to see a lot of those throughout this post!
Now, as for the set at hand it's a relatively rare baseball-only focused mini set.  As I've gone through and written all of these posts it's surprised me just how few baseball specific mini sets there are in Allen & Ginter.  I guess it feels like there are plenty of mini baseball cards since the most common mini in any pack of Ginter is a mini parallel of the base set but in terms of insert sets there haven't been many at all!  Will that be enough to propel Baseball Superstitions to the top seed for 2018 or will one of the many non-baseball mini sets rise to the top instead?
Checklist:
MBS-1 No talking about a No-hitter*
MBS-2 Batting Gloves*
MBS-3 Wearing the same Helmet*
MBS-4 Postseason Beards
MBS-5 Leaping over the Foul line
MBS-6 Pre-Game Meal
MBS-7 Rally Caps
MBS-8 Wearing The Same Hat*
MBS-9 Drawing in the Batter's Box Dirt*
MBS-10 Between-Inning Routine*
MBS-11 Curse of the Bambino*
MBS-12 Not Changing Seats*
MBS-13 Lucky Jersey Numbers
MBS-14 Mismatched Socks
MBS-15 Baseball cards*
Exotic Sports 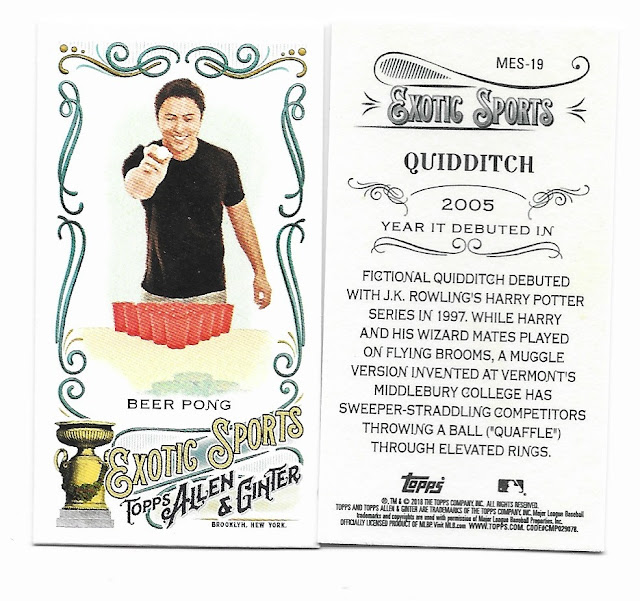 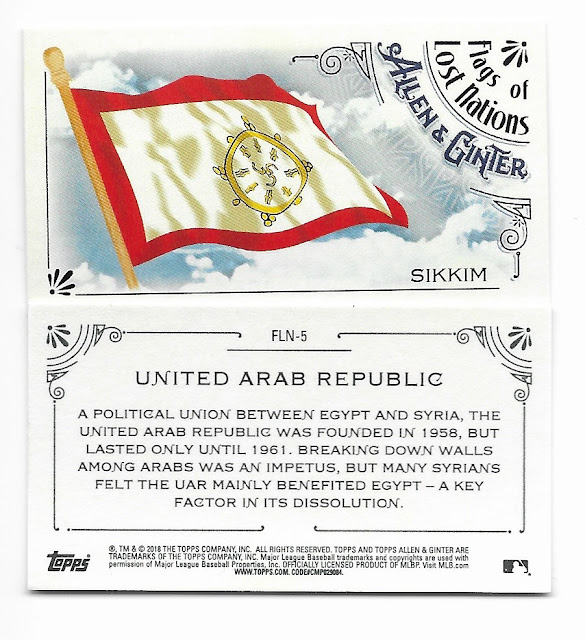 If you like flag sets that Flags of Lost Nations is the set for you - it's a set all about flags!  Surprise, surprise!  More specifically, rather than the usual flag sets of current countries, this time around we get flags of defunct countries.  Some countries you'd probably guess would be on the checklist (USSR jumps out to me as one such country) but others are probably more of a nod to true history nerds (Vermont anyone?).
Checklist:
FLN-1 USSR*
FLN-2 Yugoslavia
FLN-3 Tibet
FLN-4 Sikkim
FLN-5 United Arab Republic
FLN-6 Ceylon
FLN-7 Republic of Salo
FLN-8 West Germany*
FLN-9 East Germany
FLN-10 Czechoslovakia*
FLN-11 Zanzibar*
FLN-12 Zaire*
FLN-13 Tanganyika*
FLN-14 Abyssinia*
FLN-15 Siam
FLN-16 Rhodesia*
FLN-17 Prussia
FLN-18 Persia*
FLN-19 Newfoundland*
FLN-20 New Granada*
FLN-21 Hawaii
FLN-22 Texas*
FLN-23 Vermont*
FLN-24 Ottoman Empire*
FLN-25 Corsica
Folio of Fears 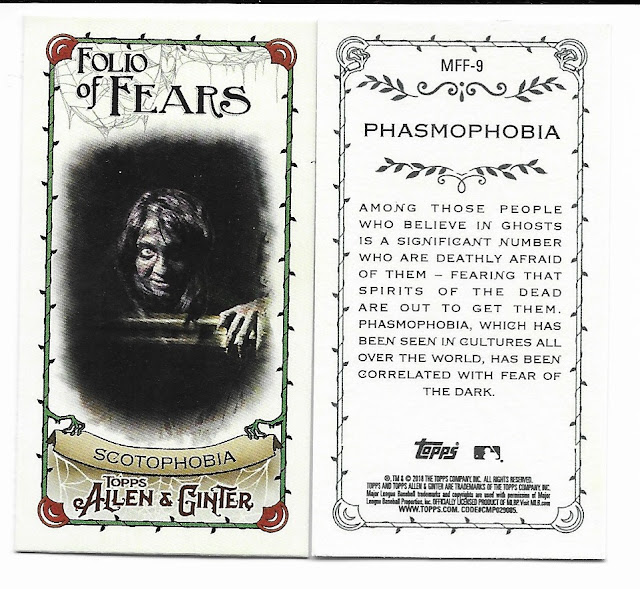 Like most of the mini insert sets in 2018, I've done a rather poor job of collecting the Folio of Fears cards.  In fact, out of the 10 cards in the set I only own four of them.  That's downright depressing!  My percentages across all of the other mini insert sets aren't much better which means I definitely need to devote some much needed collecting time (and dollars) into my 2018 set someday.  After all, I have a fear of "incomplete sets", perhaps incompletophobia or something like that?
Checklist:
MFF-1 Arachnophobia*
MFF-2 Acrophobia*
MFF-3 Entomophobia*
MFF-4 Aviophobia*
MFF-5 Ophidiophobia
MFF-6 Astraphobia*
MFF-7 Coulrophobia*
MFF-8 Claustrophobia
MFF-9 Phasmophobia
MFF-10 Scotophobia
Indigenous Heroes 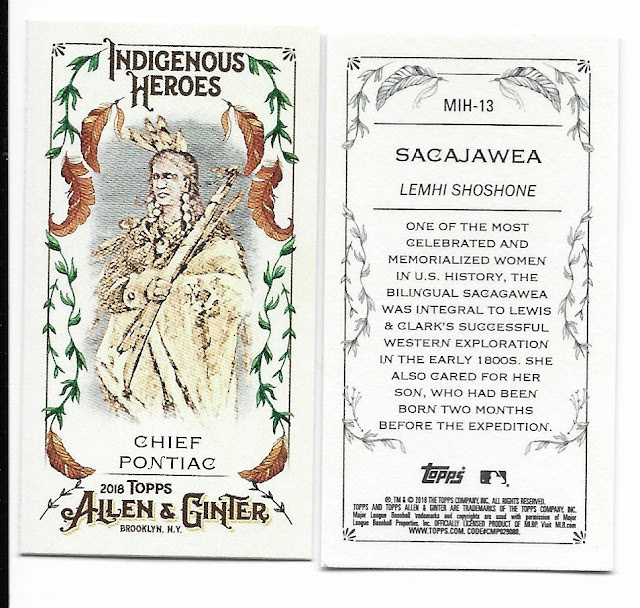 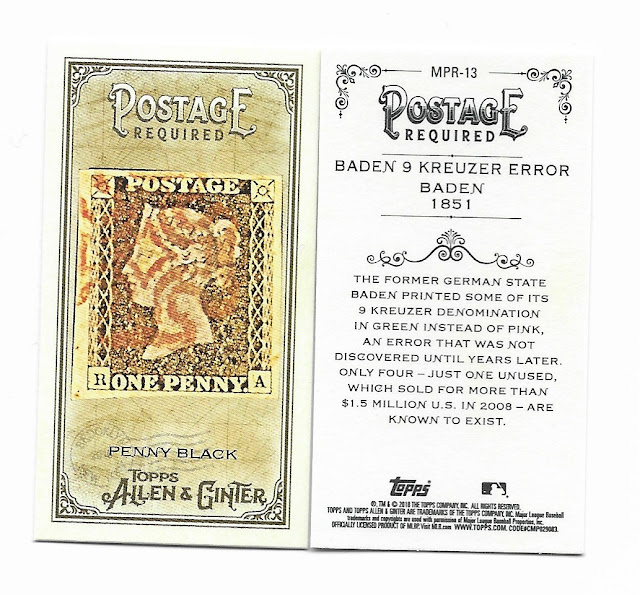 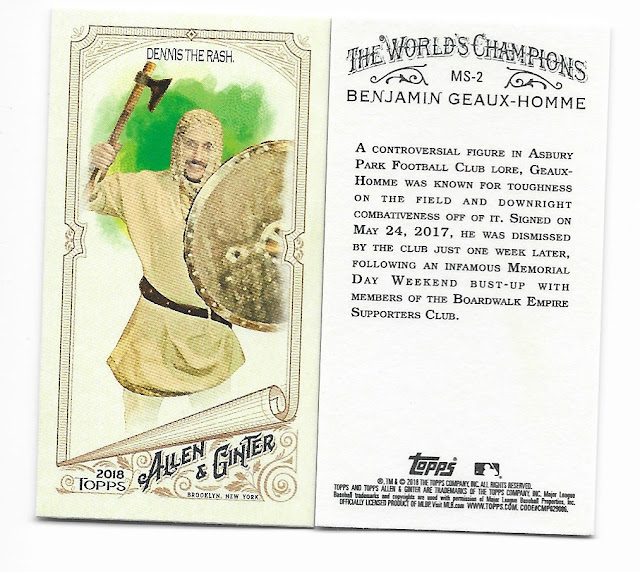 I have no idea how rare these three cards are.  Based on my personal collection, I'm guessing they actually aren't all that rare since I'm missing a ton of 2018 minis overall and yet I own all three of the stealth minis in this "set."
Checklist:
MS-1 Cuddy Calabrese
MS-2 Benjamin Geaux-Homme
MS-3 Dennis the Rash
World's Hottest Peppers 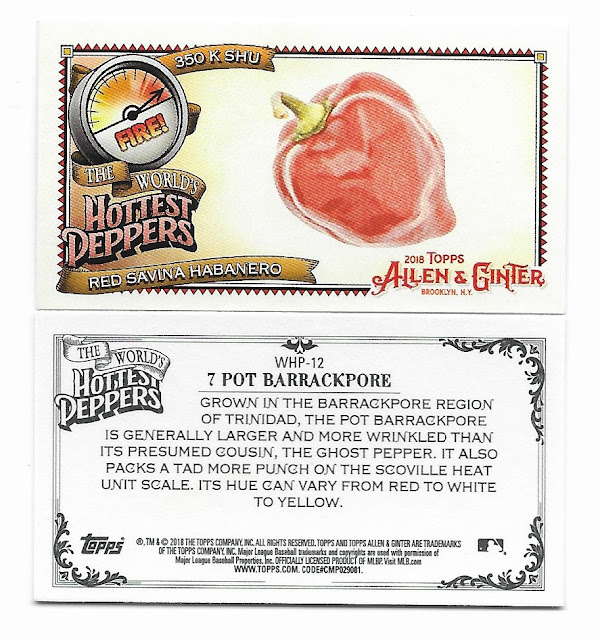 I like to grow my own vegetables, in fact I have quite a few raised veggies (and herb) beds in my own backyard.  Within those beds, I do grow quite a few peppers including some hot ones...but nothing hot like you see here.  For me, jalepenos, cayannes, and poblanos are all the heat that I need in my own cooking!
One thing worth noting about the card design for this set is that on the front of each card you get that individual pepper's Scoville Heat Unit (or SHU).  It's a small touch but I like it!
Checklist:
WHP-1 Pepper X*
WHP-2 Carolina Reaper
WHP-3 Trinidad Moruga Scorpion*
WHP-4 7 Pot Douglah
WHP-5 Primo*
WHP-6 Butch T Trinidad Scorpion
WHP-7 Naga Viper
WHP-8 Ghost Pepper*
WHP-9 Komodo Dragon
WHP-10 Trinidad 7 Pot*
WHP-11 Infinity Pepper
WHP-12 7 Pot Barrackpore
WHP-13 Red Savina Habanero
WHP-14 Naga Morich*
WHP-15 Dorset Naga*
Now it is your turn, be sure to cast your vote in the comment section below for your favorite mini insert set from 2018!
Allen and Ginter 2018 Ultimate Ginter Mini Set Bracket