on May 06, 2020
Welcome to the third of my Ultimate Ginter Mini Set Bracket posts!

The 2009 edition of Allen & Ginter featured five different mini insert sets to collect.  For those keeping track of such things, here are the number of insert sets in Ginter from 2006 through 2009.
As you can see, Topps very quickly upped the number of mini inserts in Ginter from 2006 (when there were none) to 2008 (when there were over 100 to collect).  2009 was a slight step backwards but as you'll see just because there were fewer total minis doesn't necessarily mean that the 2009 set was easier to collect in its entirety!

Creatures of Legend, Myth, and Terror 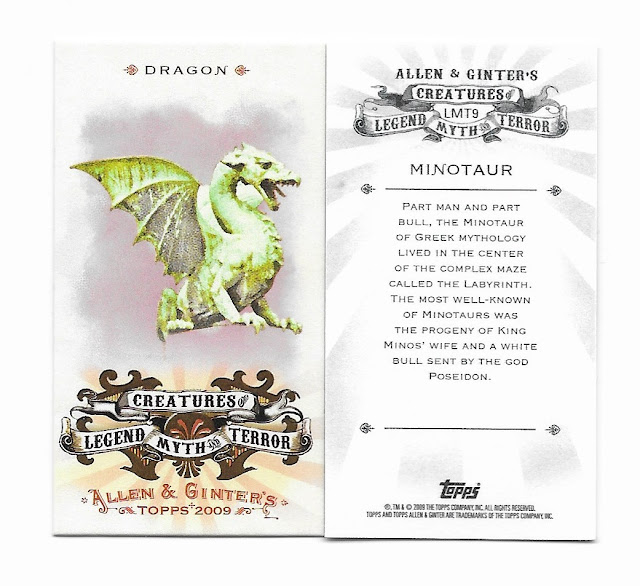 The Creatures of Legend, Myth, and Terror set contains 20 cards seeded 1:48 packs which means you'd expect one of these in every other box you open.  That's kind of crazy for a 20 card insert set (and probably a big reason why I'm still missing three of them (#5:  The Invisible Man, #14:  Griffin, and #15:  Chupacabra).  In addition, I'd like to find a replacement copy for my Dragon (#10) in the set since it has a crease across the back that I somehow didn't notice until I pulled the card out to scan for this post!

The front of each Creature of LMT has a nice drawing of the subject matter while the back of each card has a blurb about the creature.  No checklist to be found on the cards but the cards are numbered numerically at least which helps set collectors.

Thanks to baseballcardpedia though, we do have the full set checklist.  I'm going to continue my tradition of using both bold and an asterisks(*) to denote the cards that I'm still missing.  I'd love to work out a trade if you happen to have any that I need! 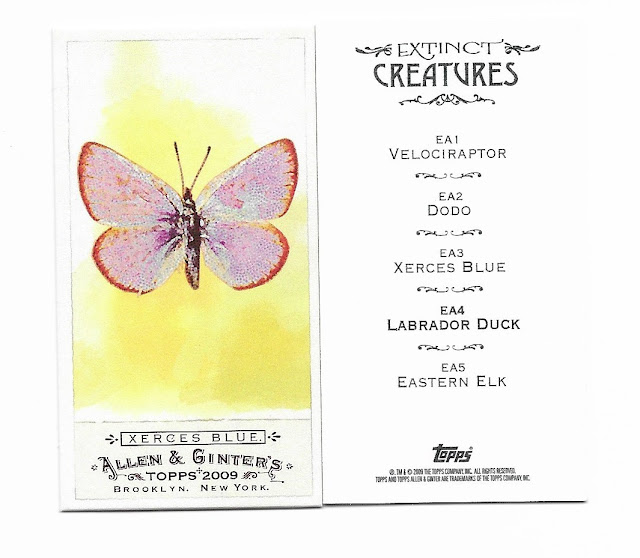 The Extinct Animals set is the first (of two) "stealth" mini inserts in the 2009 set.  Like all of the stealth inserts so far, this is another five card set.  The front of each card features a drawing of the extinct animal while the back of each card features a simple checklist.  The range of animals chosen for this five card set is quite large...one card has a velociraptor while another has a butterfly.  Like Ginter in general, you never truly know what you might get!

Despite being extremely rare (I have been unable to find exact pack insertion ratios), I actually own four of the five Extinct Animals.  Unfortunately for me as a dinosaur lover, the only one I'm missing is the velociraptor (card #1 in the set).

Inventions of the Future 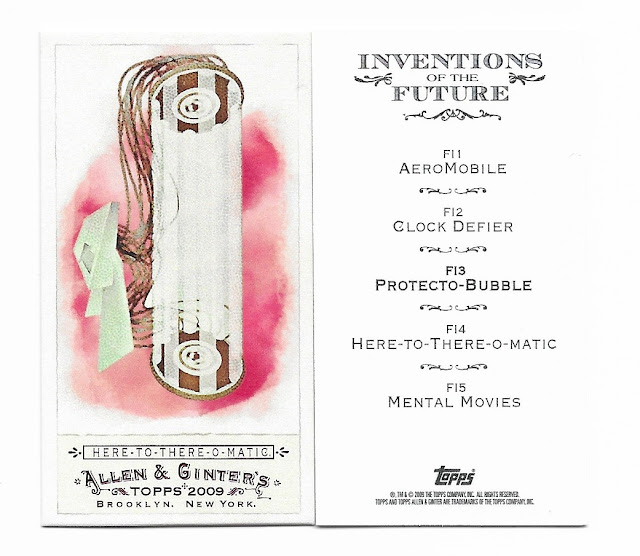 The second of the stealth mini inserts, Inventions of the Future is another five card insert set this time featuring drawings of future inventions (things like Aeromobiles or Proctecto-Bubbles).  Like the Extinct Animals set, this also features nothing but a simple checklist on the back of the card.  Also like the Extinct Animals, I currently own four of the five cards from this set (I'm only missing #5:  Mental Movies). 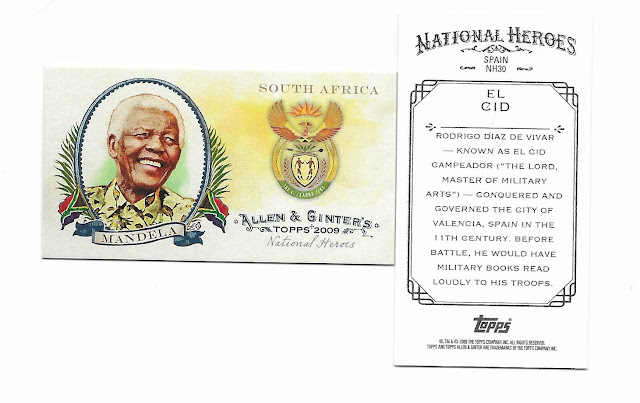 The National Heroes mini set is the largest of the mini sets in 2009.  It features 40 different cards.  The design of the front of each card has a small image of the National Hero and then a country's flag or crest alongside the name of the country.  It's a simple design but it works nicely!  The back of each card features a write-up on why that particular person is a national hero for the given country.  The National Heroes were among the easiest mini inserts to find in packs of 2009 Topps A&G (seeded 1:12 packs) and I'm pleased to report that I have completed this set.

The full checklist for the National Heroes set contains many people that I had never heard of prior to the set's release.  I guess that's a sad indication of my knowledge of many other countries and their corresponding history! 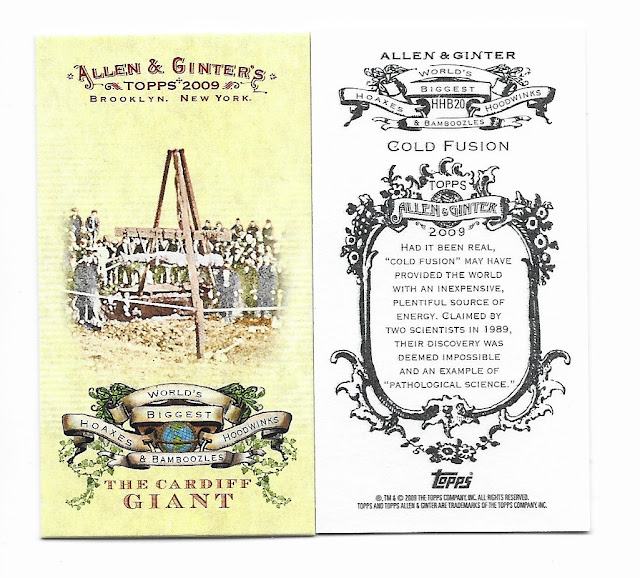 The fifth and final mini set for 2009 is a 20 card set that was fairly common to find in packs (seeded 1:12 packs).  That insertion ratio is the same for the National Heroes set but it should be noted that the Hoaxes set is only half the size of the National Heroes (which means the Hoaxes set is much, much easier to complete via ripping packs)!  That said, it's still not too bad to collect (at least back in 2009) and I'm pleased to report that I also have this mini set done (which means I've got 40% of the mini sets done for 2009...a tough year for collecting)!

The design for this set has an image of the Hoax, Hoodwinker, or Bamboozler on the front and then a bit of a blurb about what they did (or the mystery surrounding them) on the backside.

That does it for the 2009 mini inserts which means now it is your turn to cast your vote in the comments below for your favorite mini set for the year 2009.
Allen and Ginter 2009 Ultimate Ginter Mini Set Bracket