on May 08, 2020
Before I get to today's seeding vote, I wanted to take a quick moment to congratulate the 2008 Baseball Icons as the most popular mini set from the '08 edition of Allen & Ginter.  The Baseball Icons set barely squeaked by the Ancient Icons which is another set that might be poised to do some damage in the real bracket once it's all set!  By the way, I didn't mention my tie breaker but in case it becomes necessary if two (or more) sets are tied at the end of a vote, the winner will be whichever set got a vote cast for it first in the comments.  In this way, commenting early does give your favorite set a potential edge in the case of a close vote!  Now, let's return to the regularly scheduled post for today.


Welcome to the fourth of my Ultimate Ginter Mini Set Bracket posts!

The 2010 Allen & Ginter set has a whopping nine mini sets included in it.  Here's the updated counts for mini sets in the brand's run to date:

As you can see from the above count, the 2010 set went completely overboard in terms of number of mini inserts, more than double the number of cards in 2009 and almost 80 more than the next closest year in terms of total number of minis to collect.  The sheer number of minis to try and track down (and many are really, really rare as you'll see in a bit) led me to actually not try and collect all of the mini sets for the first time ever.  Unfortunately, 2010 isn't the only year where I had to say "enough is enough" and skip out on trying to complete certain sets.

Speaking of the sets, let's go through all nine of them now! 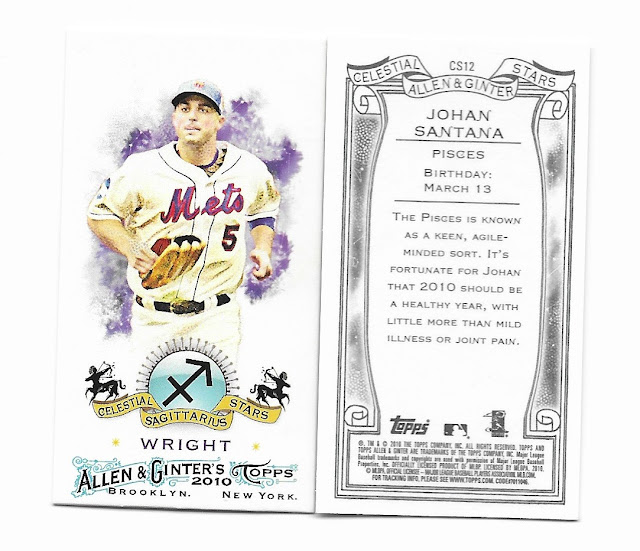 The Celestial Stars mini set contains 12 cards, one for each of the signs of the zodiac.  These were fairly tough minis to find (exact odds unknown) and I've actually had a lot of difficulty tracking them down for my own collection (I'm still missing:  #3, 4, 5, 6, 10, and 11 from the set).  As with earlier posts, I'll continue to use bold and an asterisks(*) to denote the cards that I'm still looking for on the checklist.

All things considered, I wouldn't say that this list is packed with huge superstars but of course I'd be missing the biggest name in the bunch (Jeter).

Creatures of Legend, Myth, and Joy 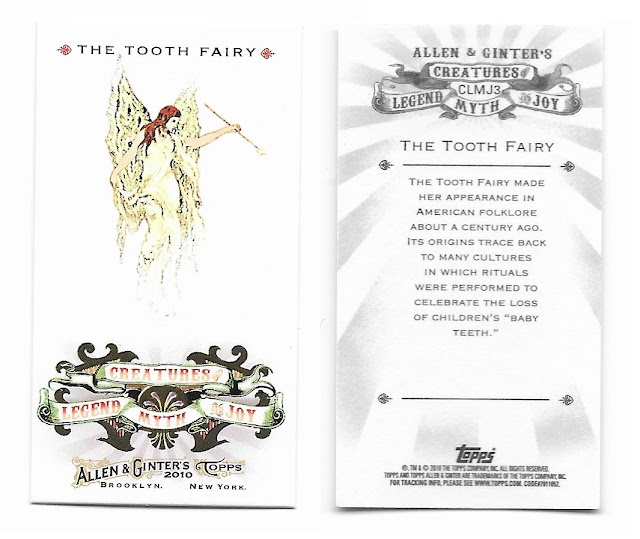 The Creatures of Legend, Myth, and Joy have a similar name to one of the mini sets from the previous year (Creatures of Legend, Myth, and Terror) but the difference here is that the Creatures of LMJ were actually super rare minis seeded 1:128 packs or basically two per case.  This is one of the sets from 2010 that I've decided not to try and collect.  At the moment, the only card I own is the Tooth Fairy and I doubt I'll have many opportunities to acquire any other cards from this particular set. 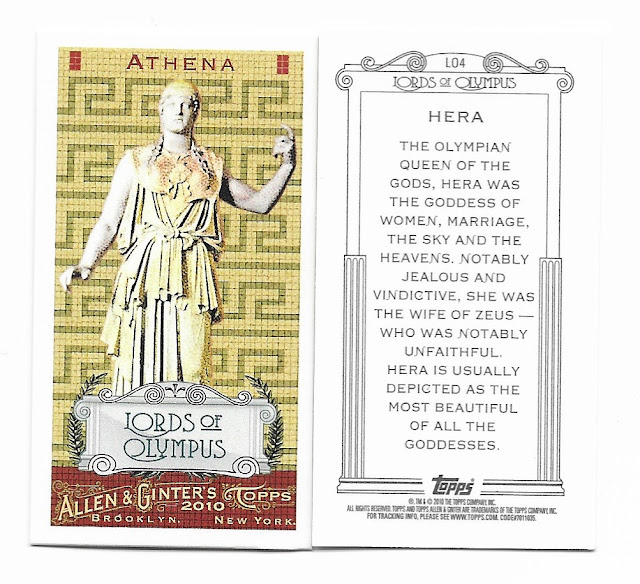 Finally, we get to one of the "common" mini insert sets and it's the Greek-themed Lords of Olympus.  This 25 card set was seeded 1:12 packs and it's one of the sets from 2010 that I can say I've actually finished off.

As you can see from the checklist below, the Lords of Olympus set pretty much features most of the major gods and goddesses from Greek mythology.  I'm actually reading a book on Greek mythology right now so there are a number of names on this list that mean more to me now than they did back when this set was released!

Monsters of the Mesozoic 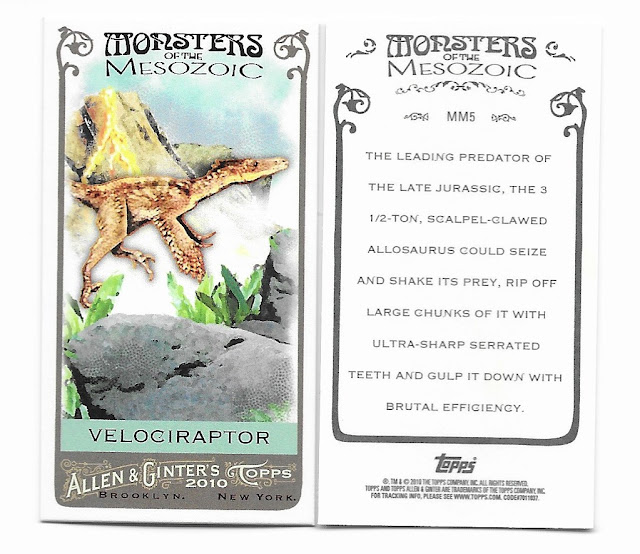 Like the Lords of Olympus, the Monsters of the Mesozoic was another one of the "common" mini sets (also seeded 1:12 packs).  Unfortunately for set collectors, 1:12 packs still only means 2 cards per box and since the dinosaur set also had 25 cards in it it was another beast of a set to actually build in its entirety.  That said, I'm a huge dinosaur fan so I put forth a lot of effort to finish this set as quickly as possible.

Plenty of famous dinosaurs listed but there's also a few that might leave you scratching your head (Bambiraptor?  Nomingia?). 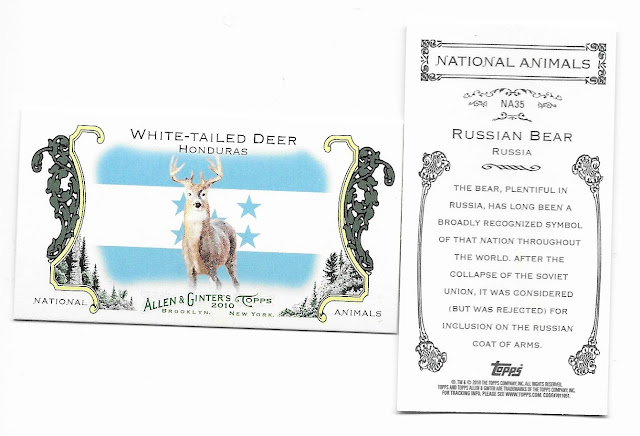 The National Animals mini set is the largest (in terms of number of cards) of any in the 2010 set.  This set contains a whopping 50 minis to track down and yet they were only seeded 1:8 packs (or three per box).  The theme of 2010 seemed to be Topps giving the proverbial middle finger to set collectors...almost every set was nearly impossible to finish off without resorting to trading and buying singles from the online marketplaces.  That being said, I did manage to finish this set eventually!

Each card in this set has the country's National Animal front and center laid over top the corresponding nation's flag.


Sailors of the Seven Seas 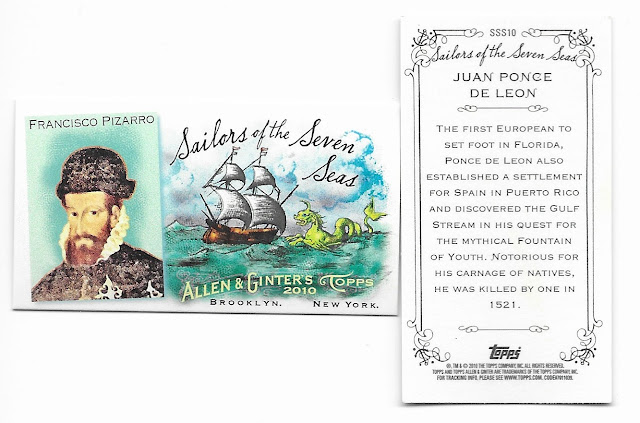 The Sailors of the Seven Seas set features 10 cards in it and was basically a box hit (seeded 1 per box).  Despite the rarity of the set, I also managed to build this set back in the day and to be honest, I'm not quite sure how I pulled that off!  Each card in this set has the same drawing of a ship and Kraken on the right along with a single image of the particular sailor on the left side of the card. 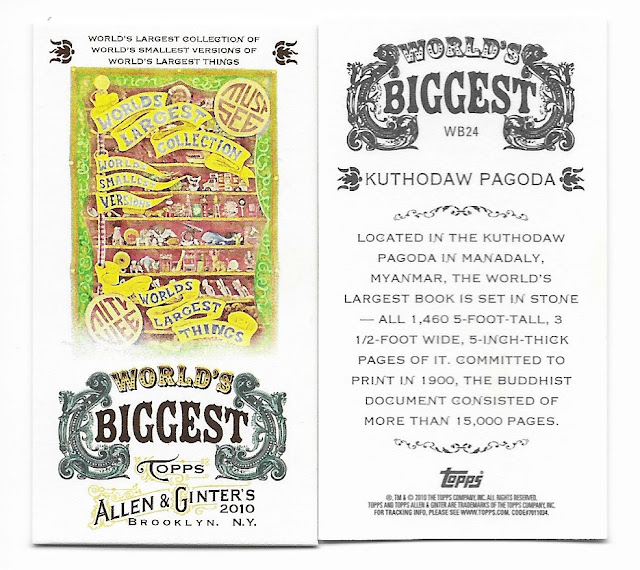 The World's Biggest was definitely the most confusing of the mini sets issued in 2010.  The set has 25 total cards in it but you could only find the first five in retail packs of any sort and the final 20 cards could only be found in loose retail packs.  This is yet another set from 2010 that I've been trying to build but so far have been unsuccessful in completing (I'm still missing seven cards from the set including:  #6, 7, 9, 14, 15, 19, and 25).  Like the Celestial Stars, this is another set that I'm not sure if I'll ever finish...and I'm almost 100% certain that my chance to finish it via trades has passed by a long time ago! 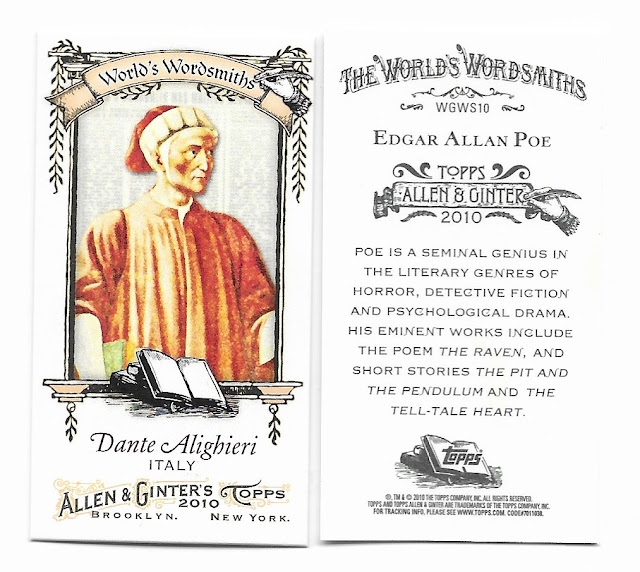 Our final officially announced mini set is the World's Greatest Wordsmiths.  This is a 15 card set that was also a box hit (seeded 1:24 packs just like the Sailors of the Seven Seas set).  Despite the horrible odds, I was able to build this set in its entirety and for that I feel lucky!

I can at least proudly say that I've heard of all of the authors except Cervantes, Bunyan, and Kuo.  I've actually read something by about five or six of them I think.  Not too bad for a math guy, right?!

World's Saltiest Sailors
(Note:  No image here since I don't own any of these cards!)

The World's Saltiest Sailors seems to be full of pirates while the similarly named Sailors of the Seven Seas is mostly what we would call explorers (although many of those explorers were probably just as evil and did just as atrocious things as the so-called pirates did).

Now it's your turn!  Time to vote for your favorite mini set of 2010 in the comments below (and you have a lot of choices so this should be interesting)!
Allen and Ginter 2010 Ultimate Ginter Mini Set Bracket