Group Break Wrap-Up: 2003 MLB Playoff Prestige (One of the Most Fun Boxes I've Opened in Quite Some Time!)

This past Saturday, I completed three different group breaks (2020 Stadium Club Box #3 which I already recapped on the blog, 2003 Playoff Prestige which is the subject of today's recap, and a pair of boxes of 2020 Allen & Ginter which I'll recap in a future post). 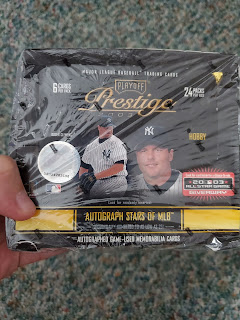 I have to admit right upfront that I had no idea what exactly to expect from the 2003 Playoff Prestige box.  Good, reliable information about that set (and about what to expect in a box) was hard for me to find and so I went into the group break kind of blind in that sense.  The good news is that no matter what it was that I was expecting, the 2003 Playoff Prestige box blew those expectations clear out of the water!  This is definitely a recap you won't want to miss!

Before we get to the main goodies, here's a quick look at the base card design for those of you (like me) who know nothing about this set: 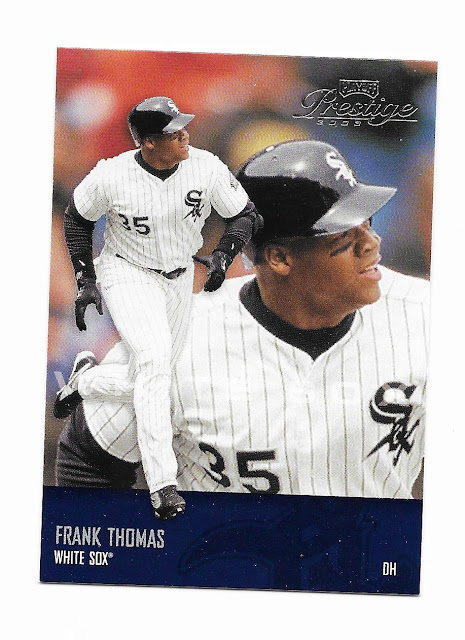 The design is simple enough, though it has a bit of that Fleer Flair vibe to it which I kind of dig.  The card stock is nice and thick as well, these cards feel good in hand.

The base set contains a total of 200 cards, the first 180 are regular base cards while the last 20 are short printed rookie cards (seeded 1:3 packs). 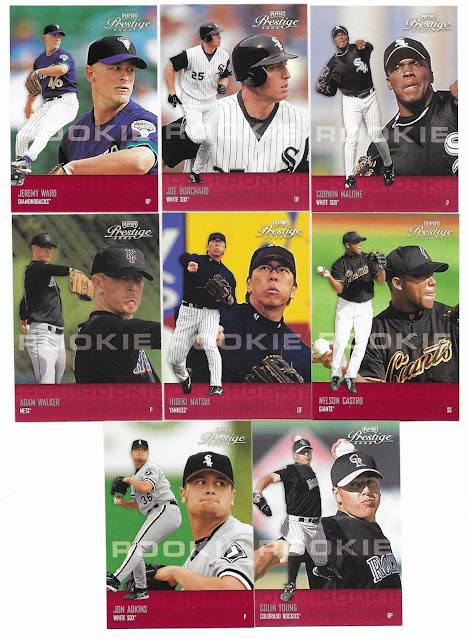 We pulled our expected eight rookies from the 24 pack box - and here it was the White Sox that were the clear winners landing 3 of the 8 cards!

The base set also has a bunch of possible parallels to pull - we ended up with two of the Extra Point Purple parallels, each numbered out of only 150. 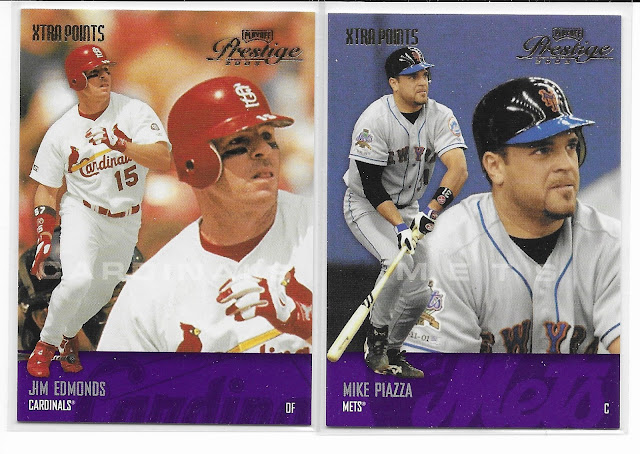 Moving on to the inserts, the most common insert set is the Connections set that is seeded 1:8 packs (or 3 per hobby box).  That might not sound too bad but that's only because I didn't tell you that there are 70 (!) different Connections cards to collect. 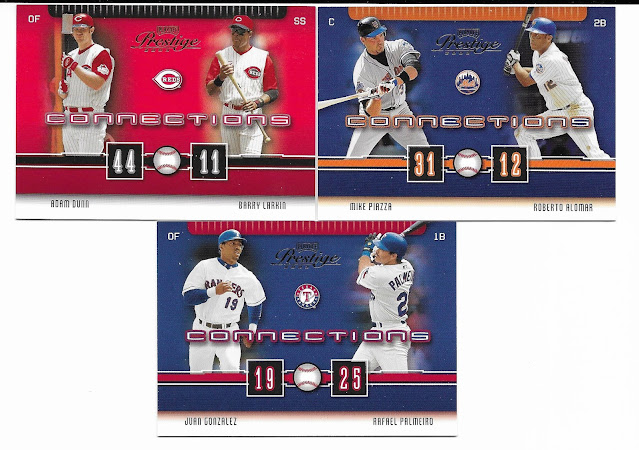 I feel like I definitely lucked out here since one of our three Connections included Barry Larkin.  Barry is actually on two different Connections cards - in the other he is paired with Ken Griffey, Jr....a card that I'd love to also track down some day!

The "classiest" looking of all the inserts in the box probably had to be our lone Diamond Collection card of Mike Piazza. 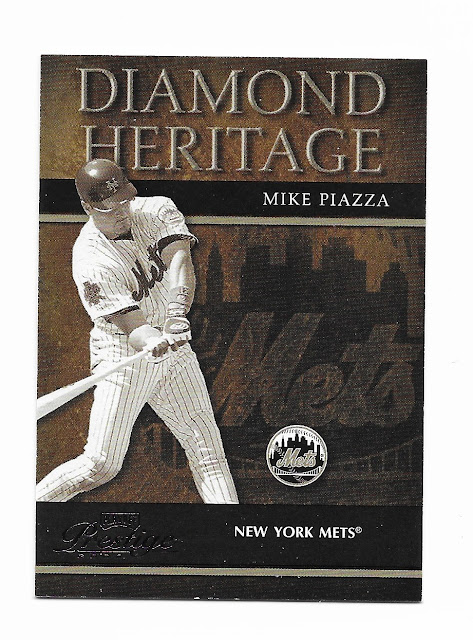 The simple design works well here - and I like the faded team logo in the background.  I kind of wish Barry Larkin was featured in this insert set as well but alas it was Adam Dunn who represents the Reds.  Diamond Heritage cards are seeded 1:21 packs so there's an outside chance that a box could contain two cards from this particular set (but obviously ours did not). 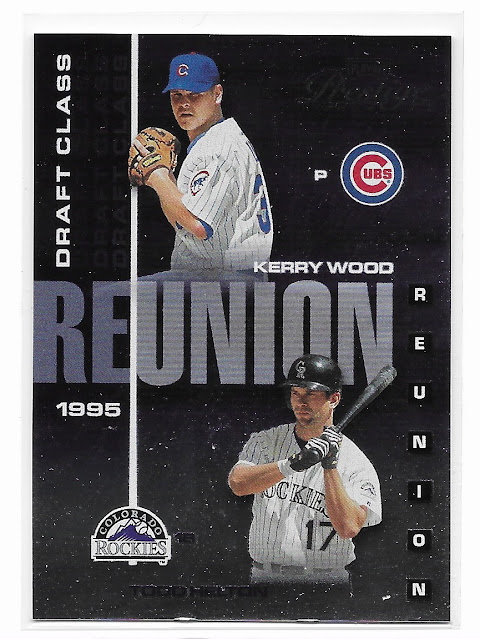 Since this was a group break, I should note that for this particular break the Cubs were claimed by Ben Martin while the Rockies were a "random" team assigned to a different slot.  My tie-breaking rule for cards featuring more than one team is that if one of the featured teams was an actual claimed team and the other team(s) were all randomly assigned teams, then the card in question goes to the claimed team.  In that way, cards with multiple teams will actually always go to the person who actually wants that particular team.  In my opinion, that's the best possible option.  Thus, for this particular card it will be going to Ben Martin's Cubs stack.  For what it's worth, had the Rockies and Cubs both been claimed teams (or both randomly assigned teams), then I would simply use random.org to randomize the card between the two team slots.

Next, a fun little surprise when I ripped the box - a pair of acetate inserts each numbered out of 2002 as part of Inside the Numbers set. 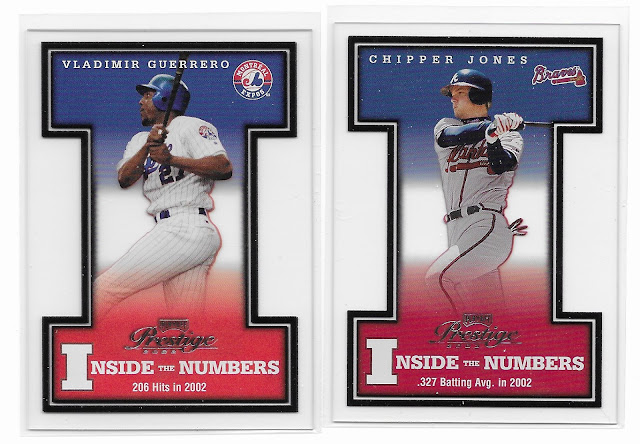 According to the pack wrapper, there is also an Inside the Numbers die-cut set which is a parallel set sequentially numbered to the player's jersey number.  We didn't get one of those but I have no complaints about what we did pull here!  The pack wrapper doesn't state the odds for the regular Inside the Numbers cards but baseballpedia.com has them seeded at a 1:15 pack rate.

The Braves landed a second serially numbered insert with this Award Winners card of Greg Maddux. 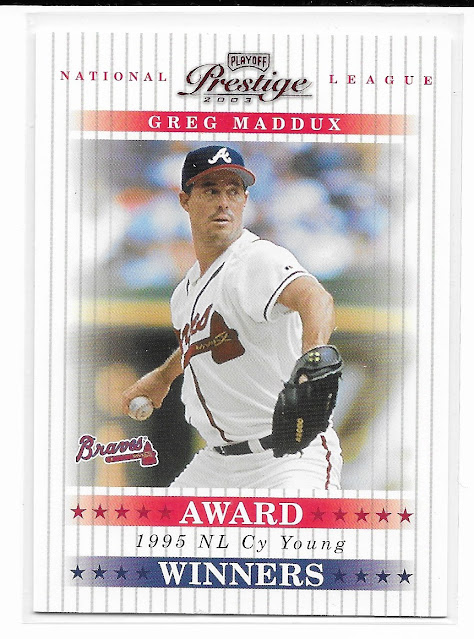 Each Award Winners card is serially numbered to the year of the award, so for Maddux's card it's out of 1995 copies.  This particular card is #0063/1995.  Pack odds for this particular insert set aren't given but I imagine that they are quite a bit rarer than the Inside the Numbers set based on how the set is serially numbered (and the fact that there are 25 cards in the Inside the Numbers set while there are only 15 cards in the Award Winners set)! 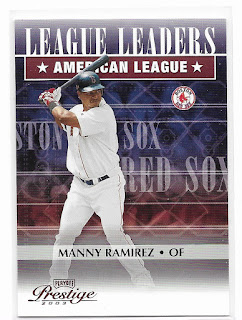 Truthfully, all of the above inserts, parallels, and short prints would have made for a fun box but we are just getting started!  The main draw of the 2003 Playoff Prestige set is the hits...and while I was thinking that we might expect two hits in a box our particular box actually offered up SEVEN different relics...and most of them were awesome!

We begin our hit parade with this Connections card of Mark Mulder and Barry Zito #153/400. 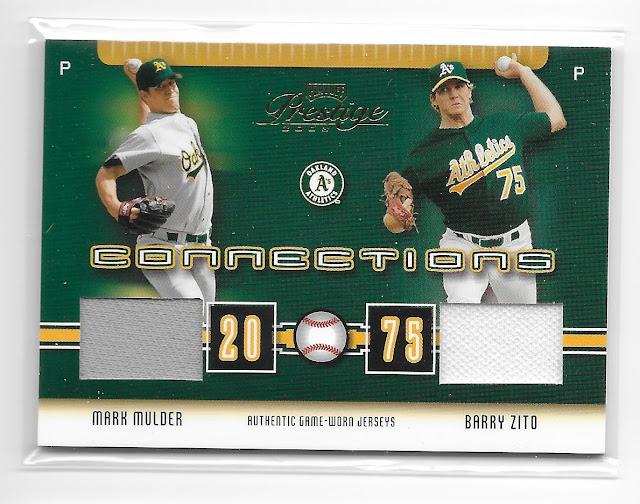 The Athletics were unclaimed in this particular break and it was me that ended up with Oakland as my random team.  I don't have any particular use for this card in my collection so it's up for trade if anyone is interested.

Going in order of interest as I see it, the next relic is this Connections card of Juan Gonzalez and Rafael Palmeiro #379/400. 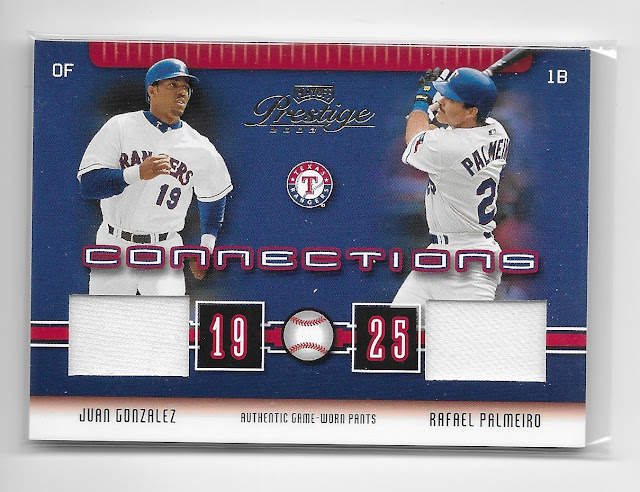 The Rangers were also a randomly assigned team - this time it was Shane M. who can thank his lucky Texas stars that the Rangers were assigned to his Mariners' team slot.  It's kind of cool that we pulled both the regular version of this insert as well as the dual-relic version!

Next up, another Connections card but this time it features a pair of game-used bases.  This dual relic is of both Albert Pujols and Jim Edmonds and is numbered 391/400. 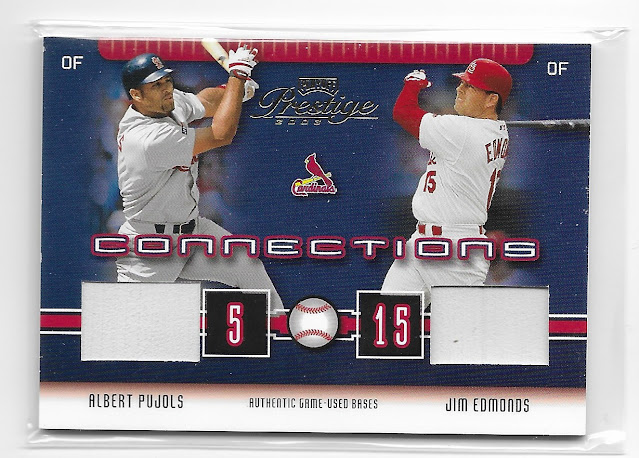 The Cardinals were claimed by Kerry (aka madding) and I've got to think he's going to be happy to get this particular card!  The fact that the relic bits are game-used bases is kind of cool, I think.

Hopefully Rod Richards agrees with me that relics featuring game-used bases are cool since his random team (the Giants) landed not one, but TWO different Connections card:  each of which features game-used bases. 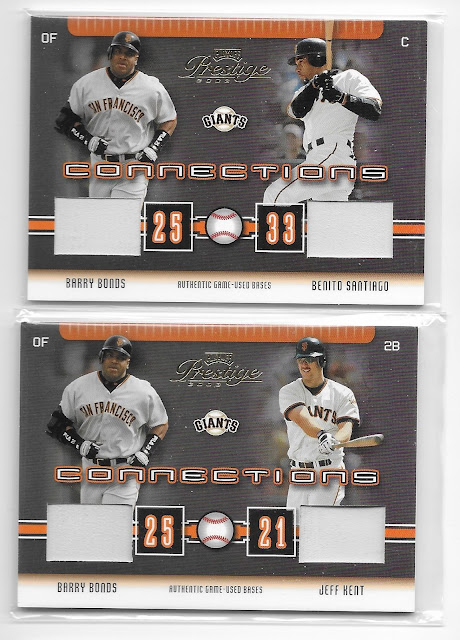 The Bonds/Santiago is #130/400 and in a fun twist, the Bonds/Kent is also #130/400.  There's no complaints from me about a box that produces a pair of different Barry Bonds relics!

If you thought all of the above relics were cool, well...we aren't done yet!  Our final Connections relic is this super sweet Edgar Martinez / John Olerud card #199/400. 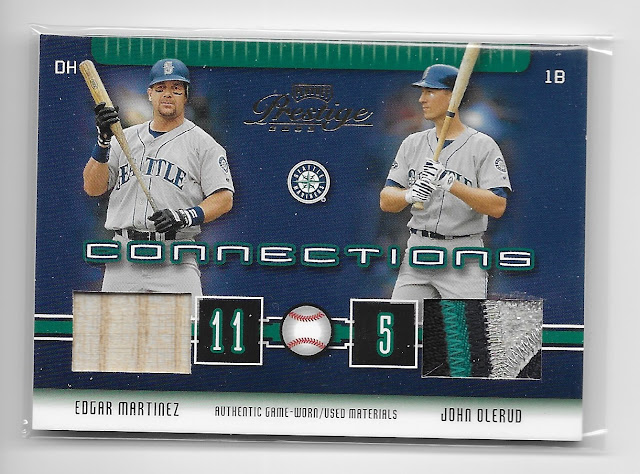 That patch piece for Olerud is a true thing of beauty.  I don't open (or collect) many sets that have gorgeous patches like that included in the standard relic set.  In this case, I hope Shane is happy since he claimed the Mariners (and that slot already netted him the Rangers relic)!

And finally, we get to final relic of the box and it's our only single player relic: 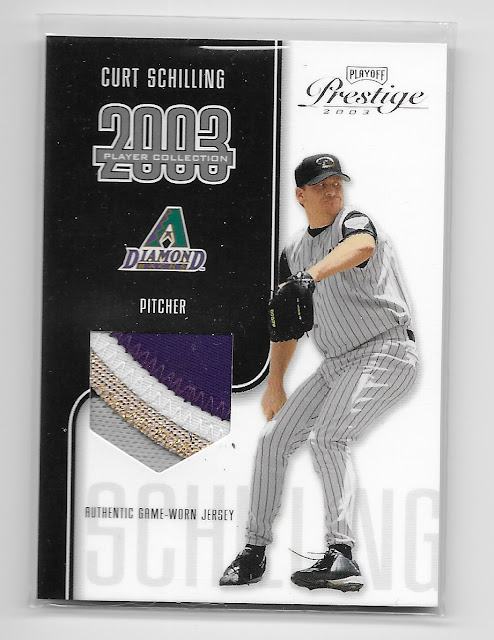 That's a Player Collection insert of Curt Schilling and features a large, gorgeous patch!  The card is numbered 184/325 which also means it is the rarest of the relics from our box.  Congrats goes out to Ben Morris who ended up with the D-backs as his random team with the Tigers slot.

Wow!  Take a deep breath and go back and look at all the cool stuff we pulled from a single box of 2003 Playoff Prestige.  I honestly have no idea if seven relics is normal for boxes of this stuff...but when you couple all of the awesome relics (of good name players I might add) with the cool inserts, you end up with a super fun box to rip.

So fun, in fact, that I've already lined up a second box of this stuff that should be coming to my house within a week or so.  I had so much fun ripping this that I felt I should do another group break involving this set.  I think a lot of people missed the boat the first time around...I'm expecting the next break of 2003 Playoff Prestige to fill much faster now that we all (myself included) kind of know what to expect!

I still have one more group break to recap (the 2 box break of 2020 Allen & Ginter) which I hope to get to a little later this week.  For now, I invite you to keep up with the blog for future Group Break announcements (or, perhaps even better, join my Facebook group dedicated to my group breaks)!  At the moment, I'm working on filling out the rest of my 2020 Topps Allen & Ginter 2 Box Break (join here).