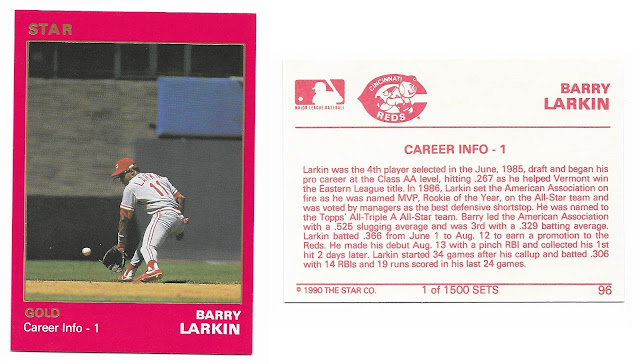 This is the sixth (of nine) different Barry Larkin cards in the 1990 Star Gold set (you can find my write-up of the fifth card here).  The card itself highlights Larkin's career to date (well, at least a good chunk of his career since the next card in the set is also a "career info" card).  In 1990, Barry had barely gotten his feet wet in the big leagues and yet he was already a star on the rise - and a quick look at the back of this baseball card will show you why so many people were high on the future Hall of Famer!
I'd also be remiss if I didn't mention how cool the picture is on the front of the card - it's a simply shot of a routine ground ball...and yet I feel like this is the first time I've seen an image from this particular angle/distance on a card!  The only drawback is that the wall behind Larkin is boring - nothing of note to see there, though I do wonder where this particular photo was taken (I'm assuming Riverfront Stadium but I could easily be wrong).
Barry Larkin Larkin Collection Star Gold 1990