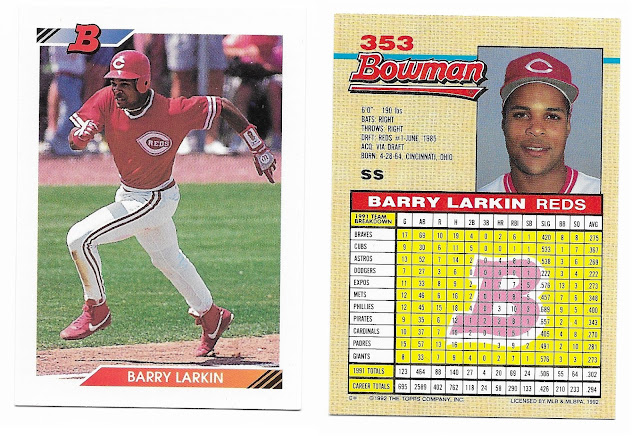 I've stated numerous times over the years that I'm not much of a fan of most Bowman products.  For me, the 1992 set is probably one of the better Bowman designs but there's still plenty to dislike about the set.  Let's start with the fact that there are no team logos anywhere.  Instead, you get two big Bowman "B's" as well as an oversized "Bowman" word.  Furthermore, the back of the card is fairly difficult to read - that big red B in the middle of the stat grid is simply terrible design (either lighten the B or, better yet, replace it with a faded team logo).  At least the team-by-team breakdown is kind of cool, something Bowman did a lot of back in the early 90s.
Overall, this is a card that I'm happy to own for my Barry Larkin Collection but it's not going to be enough to convince me to try and collect the entire 1992 Bowman set.