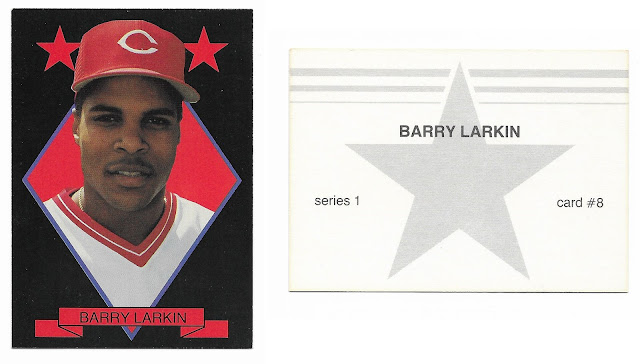 The late 1980s saw a smattering of different "oddball" sets including a bunch that go under the Broder name...and a few sets (such as this one) which I've seen listed under the Broder name (and also not under the Broder name).  For example, on TCDB this set is simply listed as "1988 Red Stars Series 1" but from what I can tell (based on this card which is listed as Broder set, at least on some sites), I think the same company made both cards.
In the end, maybe TCDB is correct in that this isn't an official Broder release (if that's even a "thing" seeing as how the Broder cards were all unofficial baseball cards as far as I can tell).  No matter, it's definitely a rather unique addition to my Larkin collection - even if the two red stars on the front of the card kind of makes it look like Larkin has some sort of weird devil horns happening.
As for the card back, well...let's just say that whoever made this set obviously didn't care about the card backs at all!  Slap a star on there, player name, and a card number and call it good.  Yikes!
Barry Larkin Broder Series 1 1988 Larkin Collection