on April 14, 2021
It's time for another Breaker's Club recap post - this one will cover the rather awesome box of 2021 Donruss that we ripped last week.
I find Donruss to be a fun rip year in and year out.  Sure, the lack of team logos is a huge detriment to the set overall...but the physical act of busting a box of the stuff is still super fun. 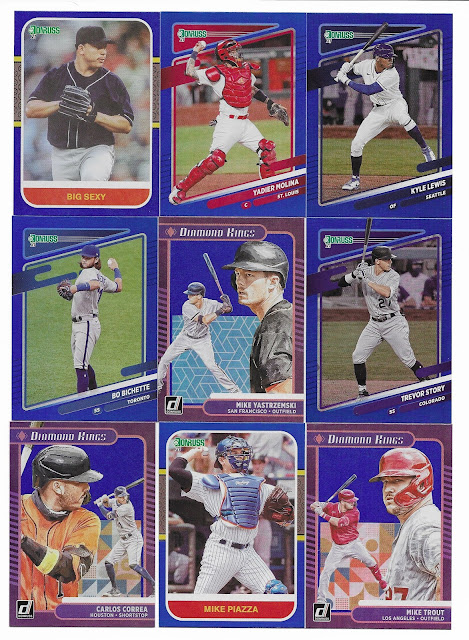 Each pack seems to have something interesting - including one of the hobby exclusive Holo Blue parallels in every pack!  I didn't scan all 24 parallels but I did pick out a few of the highlights, perhaps most notably the "Big Sexy" card of Bartolo Colon which I like way too much!
The Holo Blue parallels are certainly nice but they aren't the only parallels in the set.  We also pulled a total of 10 of the "candy cane" parallels (I don't know what the proper name for this set is but it reminds me of candy canes and/or barber poles).  Each of the "candy cane" parallels is numbered out of 2021. 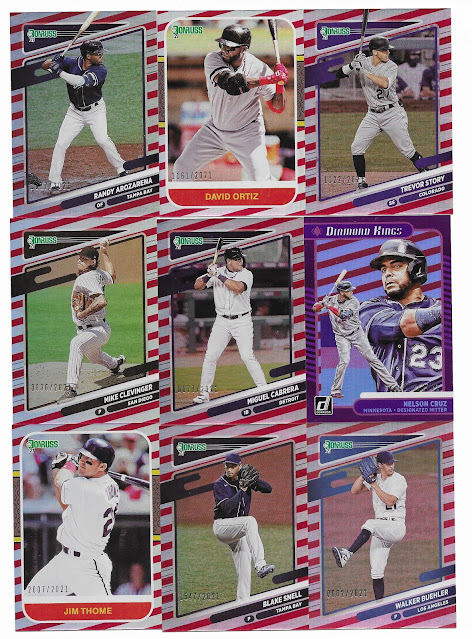 Not shown is the Mike Trout Diamond King #/2021 (a nice consolation prize for myself since no one claimed the Angels in this edition of the Breaker's Club).
I hope you like parallels because we aren't done yet.
Next, a bunch of star parallels that are printed on cardboard stock.  These are not numbered but I think Jordan will be happy since he has the Yankees (the team that landed two of the four star parallels). 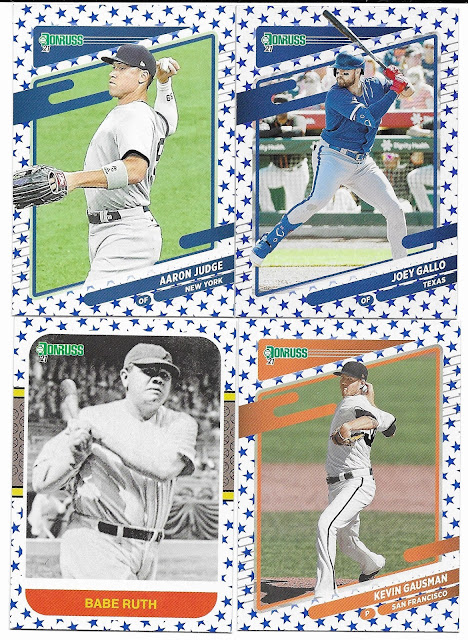 We also found a pair of Stat Line parallels. 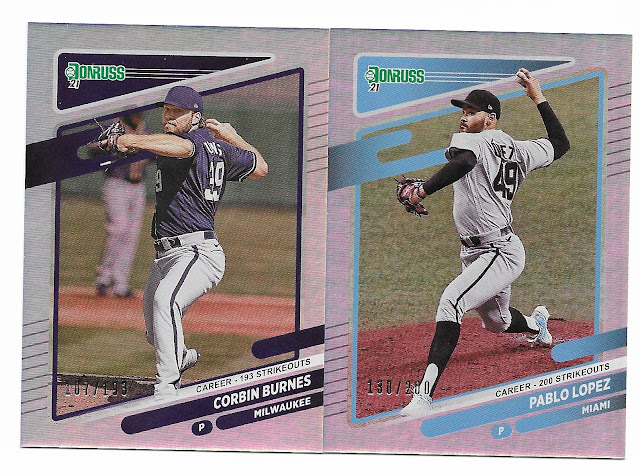 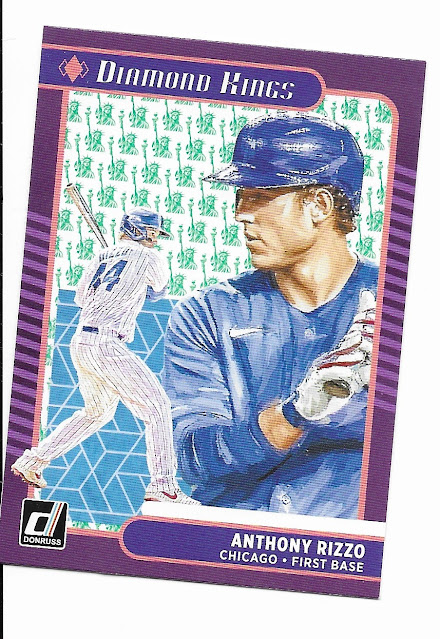 Despite only finding one of these, the card is not serially numbered.
And last but certainly not least for the parallels - how about an Artist's Proof parallel numbered out of only 10?! 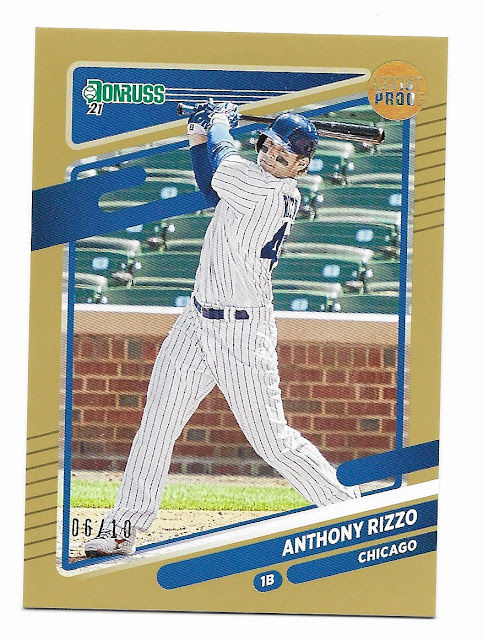 That's a sweet Rizzo for the Cubs (Claimed by Ben Martin this time around).   Congrats Ben!
While 2021 Donruss is obviously chock full of parallel cards, it's (surprisingly) light on actual insert cards.  Our box gave us a total of four "regular" inserts.
First, a "Livestream" card of Luis Robert #/999. 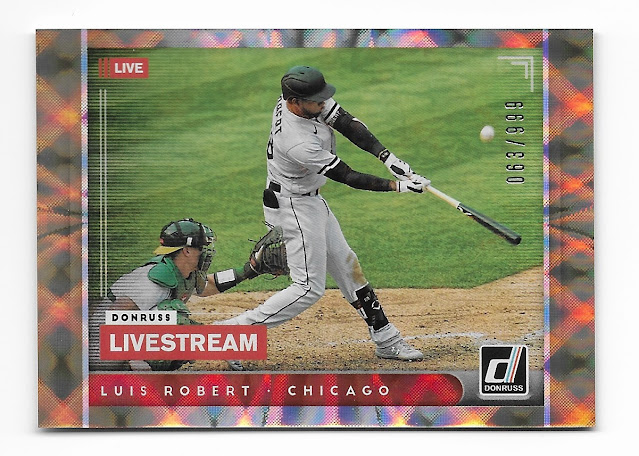 Hard to complain about that one!
We also found one of the Highlights cards - a Jose Abreu #/349. 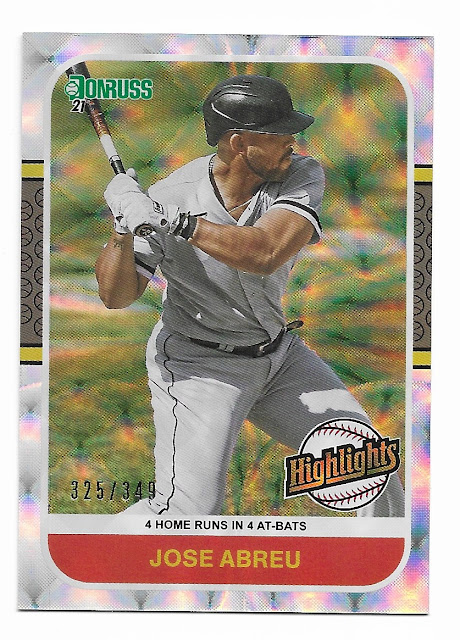 Pretty good box for the White Sox (and for Matt Stevens who claimed the White Sox in the break)!
Finally, for the inserts come my favorite two cards - both from the Unleashed set. 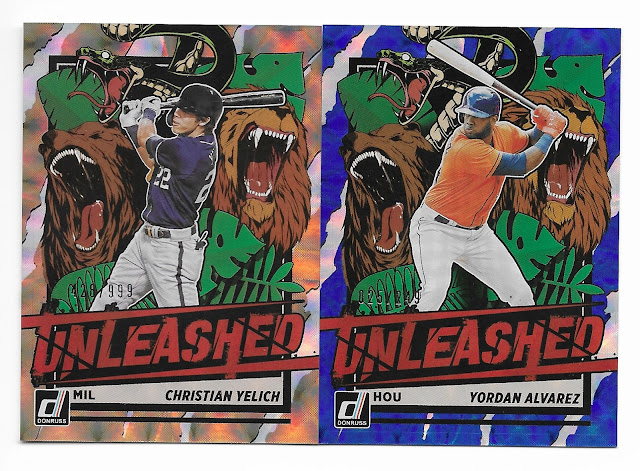 The Yelich is #/999 while the Alvarez is a blue parallel #/249.  The Unleashed cards are comic book awesome!
All of the above goodies in the box and I still haven't gotten to the three promised hits.  Our box ended up giving us two autographs and a single relic card. 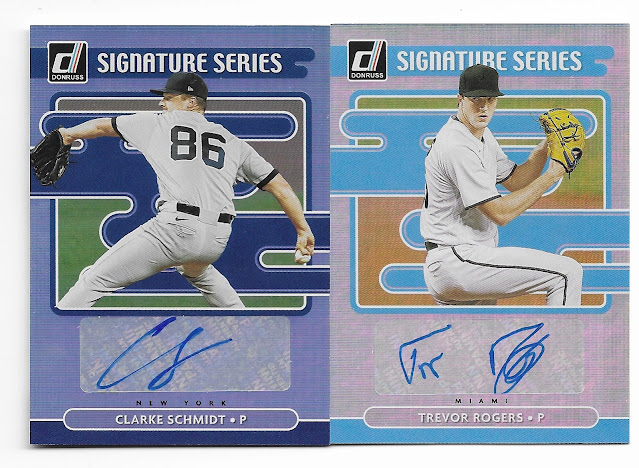 I'm definitely not impressed with Trevor Rogers' signature "attempt" on his card.  I don't really know much about either guy here so who knows, maybe in a year or two these will be good?
Finally, our relic was of a player who is quite good: 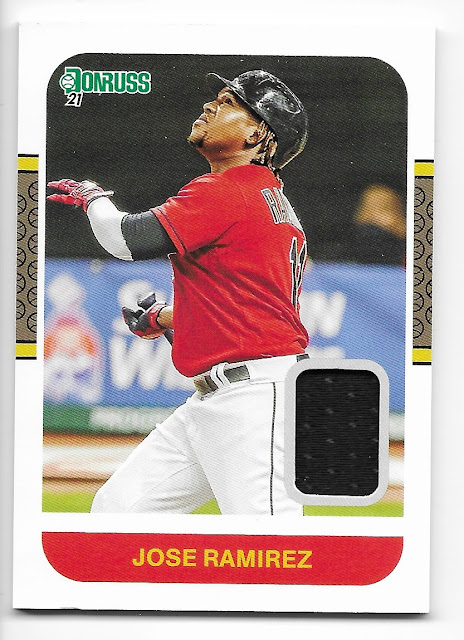 Pretty nice design for the relic set this year.
Overall, Donruss is undoubtedly a fun rip!  Parallels galore, plenty of numbered cards, a couple of cool inserts, and then three promised hits (with the chance of getting some decent names).  I can't complain about this box one bit...and I think it was a great addition to this edition of the Breaker's Club!
Nachos Grande Breakers Club Panini Donruss 2021