Chris from The Collector recently published a post where he went through his favorite bands from A-to-Z.  He issued a challenge of sorts for other bloggers to do the same thing - and since I'm always looking for something interesting to talk about (besides my many "look at what I got" posts), I figured I'd take him up on his challenge.

Before I get to the music, I feel like I ought to include a baseball card in this post so here's another recent eBay pickup - one of the last few 2020 Topps Allen & Ginter framed relics that I need for my set! 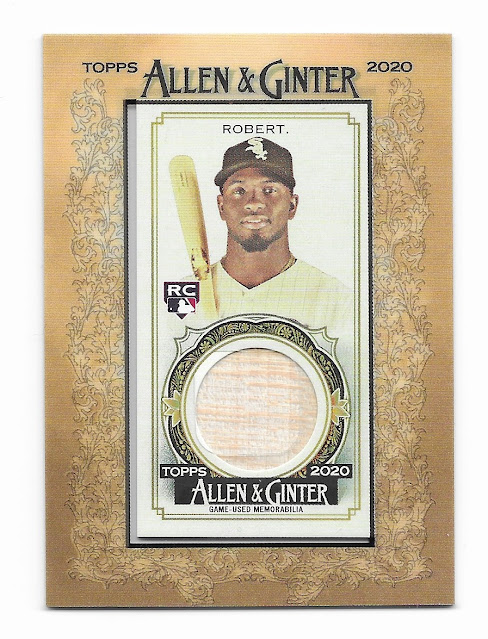 Now, to the music.  With that said, I should probably explain some things.  First, I was born in 1982 which means much of my musical preferences were shaped by the sounds of the early-to-mid '90s.  Second, unlike what Night Owl claimed in his A-to-Z post, my musical tastes have definitely changed as I've aged.  Third, I'm writing my preamble to the post in real time and I truly have no idea what my musical list is going to look like (and I can't wait to get started)!

The first letter of the alphabet is a surprisingly fertile letter for bands that I like!  Right away, I think my current favorite "A" group has to be AJR.  My daily commute to and from work each day is a little over 50 miles each way which means plenty of time to listen to music.  AJR is a band that I can listen to on my way to work (while I'm still tired) and on my way home (when I'm in the mood for something a bit more lively).  Heck, I can even listen to most of their stuff when I'm out running!  That all being said, AJR is a fairly recent addition to my "favorite artists" list - and choosing one "A" band has proven to me that this particular blogging challenge is going to be tricky from start to finish!

Ugh, another impossible choice for the letter B!  For years and years, I would have pegged the Beach Boys as my favorite "B" band (and bonus points for the double letter usage ala Scattergories rules, right)?!  In fact, did you know that the Beach Boys were one of the first two CDs that I ever bought for myself?  More on the other CD in that same purchase a little bit later in the alphabet.

My musical tastes are (admittedly) all over the place.  If I had to guess, most reader have probably never heard of Carbon Leaf - they are an indie/celtic band with catchy songs and the occasionally wonderful lyric or two.  The song I linked to above (What About Everything) always spoke to me - first as a student myself and now as a professor:  It's school, then work and then life that just sharpens the blade

Then I think about being done, with no resume

With no one left to blame

Good stuff - and sometimes I even play this song for my students as a not-so-subtle reminder for them to enjoy life.

D is the first letter where I'd say my favorite band switches completely based on my mood.  More often than not, it'd be Dire Straits that I'd choose but there are times where I'd pick either Dawes or Dropkick Murphys instead.

I'm not a big fan of going to live concerts, mostly because I don't enjoy being around huge masses of people.  That being said, I have seen Enter the Haggis in concert more often than any other band - and I think I like them just as much now as I did when I first heard of them.

F:  Fitz and the Tantrums

This is probably going to be my most recent "letter switch" band.  Up until probably a month or two ago, I would have slotted in Fun. here as my favorite "F" band.  Unfortunately, Fun. hasn't put out much in the way of new music (to the best of my knowledge) and sometimes new stuff catches my ear.

Remember above when I said that I'd get to the other "first band" CD purchase of mine?  Well, the first CD I ever picked out was Hootie & the Blowfish's "Cracked Rear View" which is probably still a Top 10 all-time album for me.

Honorable mention:  The Head and the Heart

Sure, Imagine Dragons is a bit overplayed these days and they could even be considered "sellouts" by musical snobs.  Luckily, I'm not a musical snob and I can appreciate the variety of catchy, upbeat tunes that Imagine Dragons seem to produce year after year.

Honorable mention:  I DON'T KNOW HOW BUT THEY FOUND ME

Wow, "J" is a loaded letter for me!  In the end, it actually ended up being an easy choice - Jukebox the Ghost is one of my most played bands over the past three years or so (probably my most played if I'm being specific).  The group has a nice variety of sounds and I like almost every single song of theirs.  This is a particularly good group to jam to while cooking!

K is easily one of the barest letters in my musical library.  In fact, even the Kongos are a stretch here as I don't love a lot of their stuff.  The obvious choice would be the Killers but for whatever reason I never really got into them much.  The Kinks have a couple of songs I like but I'm not familiar enough with most of their library to list them as anything other than honorable mention.

Another relatively new addition to my musical library, Lukas Graham is sort of an "easy listen" that I do need to be in the mood for.  I find I listen to Lukas Graham a lot while shoveling snow off my driveway.  I can't exactly explain why that is but there you go.

Macklemore is probably one of the groups on my list that my current college students might also like and listen to yet.  I've been a fan of his for a long time now and I appreciate how he can sing about struggles (both his and others') in a meaningful way without (usually) coming across as being overly preachy.

N is even worse than K in my musical library.  I even Googled "band names that start with N" and still couldn't come up with a better choice than Neil Diamond.

My wife pretty much hates most O.A.R. songs so I this is a group that I can only listen to when she isn't around.  That being said, it's great music for when I'm doing some woodwork out in the garage!

I'm a big fan of Panic! at the Disco - one of the few groups that my college students also currently listen to as well.

I'm guessing most people will put Queen here in the "Q" spot on the list simply because there aren't a lot of Q bands.  For me, Queen is a legitimate favorite band of mine.

Another easy 90s pick, R.E.M. is (probably) the band that I own the most CDs from overall.  I will admit that I don't listen to them nearly as much now as I used to but whenever an R.E.M. song comes on I'm probably going to sing along.

The Stroke 9 album "Nasty Little Thoughts" is one of my favorite albums from the 90s and it's enough to land the band as my top "S" band.

Another 90s pick, the first Third Eye Blind album is good enough that they still take the top spot for the letter T.

Honorable mentions:  They Might Be Giants, Thick as Thieves, Train

I have nothing for U.  Popular pick U2 is one of my least favorite "popular" bands of all-time.  You can add them to a list with the Smashing Pumpkins as bands that most people love that I definitely do not.

Another relatively new addition to my musical library, I've been digging quite a bit of Vampire Weekend's stuff.  I had known about the band for awhile but for whatever reason I never really gave them much of a chance.  Well, now I have and they are really quite good!

Weezer gets the nod here but I almost went with the spoken word (?) artist Watsky instead simply because I love how he crafts his lyrics/words.

Not a lot of choices for the letter X but I do like the X Ambassadors a fair bit.

Apparently the end of the alphabet is pretty weak for musical talent.  I don't know much by the Yeah Yeah Yeahs but I do have their song Heads will Roll one a couple of my playlists.

This selection is less about the Zac Brown Band and more about how there are no good (to me) Z bands.  I never got into ZZ Top and that's about the extent of other Z groups I can think of.

Well, there you have it.  My list of favorite artists by letter - at least for today.  Ask me to make a new list in about six months and it might look quite a bit different!  Like I said at the outset, my musical tastes are all over the place but I say that keeps things interesting!

Thanks for the fun challenge idea, Chris!  I'd love to see what others have for their favorite artists - feel free to do your own post or simply leave your list in the comments here.