My quest to complete as many sets as possible during the year 2021 continues with another recent eBay purchase - this one for a pair of Predator of the Seas "shadow box" inserts from the awesome 2015 Upper Deck Dinosaurs set.

I love, love, love the Predator of the Seas cards - and judging by the prices that these still command on the secondary market, I'm not alone in my love for the set.  Over time, I've slowly but surely whittled down my want list - mostly grabbing cards here and there when they go for a cheaper-than-usual price.

Case in point, my latest purchase in which I was able to land two more cards for my set for a combined total (including shipping) less than what a single card from the set usually goes for! 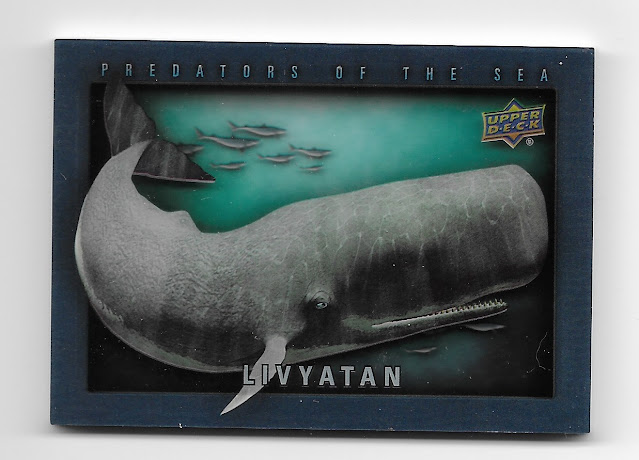 The Livyatan was apparently a whale in the sperm whale family.  The Livyatan lived 12-13 million years ago and the name scientific name of Leviathan melvillei is a nod to "Moby Dick" author Herman Melville.  The Livyatan had teeth that were over a foot long each - yikes! 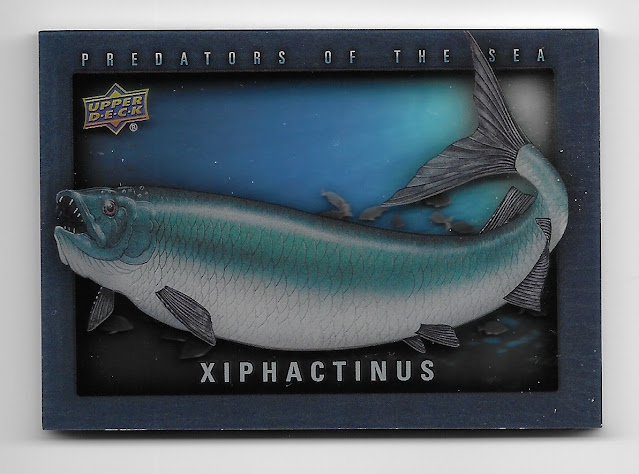 This critter's name means "sword ray" in Latin and Greek.  This creature lived in shallow waters around modern day North America during the Late Cretaceous Period (90-65 million years ago).

If you stop and think about it, it's kind of mind-boggling to realize all of the many mammoth creatures that roamed the land, air, and seas way back when.  I do know one thing, if I lived back during the time of any of these sea creatures, I'm pretty sure I'd never go swimming in any body of water!

I'm still not completely done collecting the 2015 Upper Deck Dinosaurs set but I am making good progress.  At the moment, here's what I'm still on the hunt for: