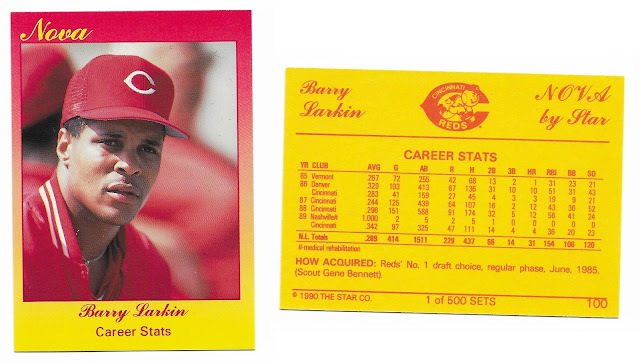 The 1990 Star Nova set has 180 total cards but I only care about nine of them - the nine different Barry Larkin cards within the set (card numbers 100 - 108).  According to the card itself, only 500 sets of the 1990 Star Nova exist which means this is one of the (relatively) rarer Larkin cards in my collection from the early 90s.  Unfortunately, I don't own all nine of the Star Nova Larkin cards (at the time of this post, I only own four of them).
As for the card itself, it's similar in style to the "regular" Star cards from 1990 (which I've already shown off on my blog in the past).  The first of the eight Larkin cards in the set is the closest to a "standard" baseball card in that you get full career stats on the back along with a brief write-up as to how Barry was acquired by the Reds (#1 draft pick).  Nice to see scout Gene Bennett get a shout out here for being the one who scouted Barry!
I need to make it a priority to track down the rest of this set - it'll be great to have the Star, Star Gold, and Star Nova Larkin cards all complete in my binder!
Barry Larkin Larkin Collection Star Nova 1990