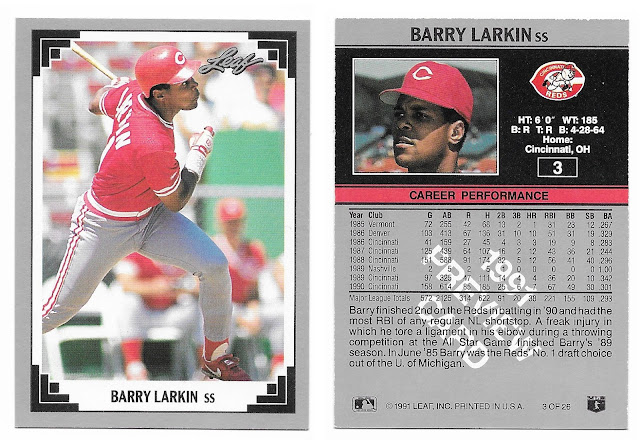 The 1991 Leaf Preview cards were actually inserted into 1991 Donruss factory hobby sets.  Each hobby set came with four preview cards (out of the 26 card checklist).  If, instead, you had bought a 1991 Donruss factory retail set, you would have gotten four Studio preview cards (Barry Larkin was not part of that particular set).  People think baseball cards are confusing nowadays with all of the parallels and inserts but I actually think baseball card collecting was more complicated in the early 90s - remember, there was no internet to immediately turn to in order to find answers!  You had to either buy a copy of Beckett or Tuff Stuff magazine (and hope your question was answered) or else find one of those comprehensive baseball card books in a bookstore!
As for today's card itself, it's actually pretty nice!  The front photo is fine and while I don't care for the overwhelming gray that makes up the 1991 Leaf design, I do like this card plenty.  The photo on the back of the card is nice because it's a second photo (something still somewhat rare for 1991) and the "1991 Preview Card" in white stands out nicely behind the career statistics box.  Perhaps most interesting to me though is the fact that the "real" 1991 Leaf card didn't use either of the photos seen on this preview card.
1991 Leaf Barry Larkin Larkin Collection