on November 26, 2021
Earlier this week, we ripped a pair of boxes of 2021 Topps Archives as part of a group break.  I've decided to try and be a bit more proactive in using group break boxes to serve as boxes for the subject of box reviews - kind of a "two birds, one stone" situation but it should also make for my Box Reviews page on my blog to be a much more comprehensive site for people moving forward!
For today, we are going to take a look at the first (of two) boxes of 2021 Topps Archives.  Truthfully, our two boxes were kind of Jeckyll and Hyde-esque with this box aligning more with the even Hyde while the other box was definitely the much better Jeckyll!  I'm getting ahead of myself though, so let's start at the beginning.
2021 Topps Archives Hobby Box:
Each hobby box contains 24 packs with 8 cards per pack plus a box topper.  Each box promises two autographs plus there are a number of inserts and parallels to chase down.  Let's begin with our box topper which was this pretty nifty poster of Trent Grisham, Wil Myers, Fernando Tatis, Jr., and Manny Machado as part of "Slam Diego." 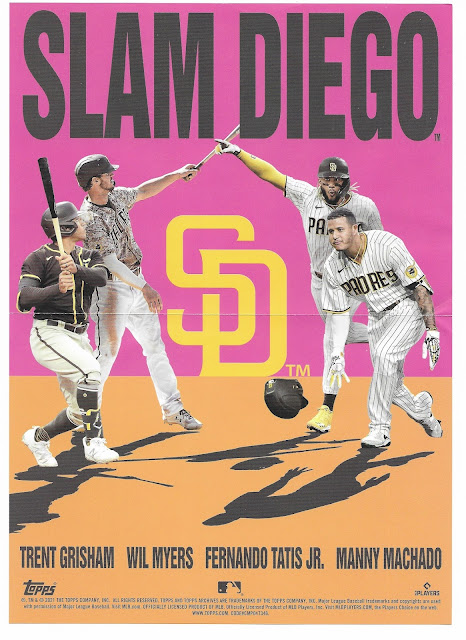 The colors are awesome here - bright, crisp, and everything you'd want a poster to be.  If I were a Padres fan, I'd love this one for sure!
Moving on to the base cards, our box gave us a total of 174 base cards out of the 300 in the full base set (58% of the base set).  The base set is essentially divided into eight subsets - all but one sporting the design of a previous Topps' flagship set.
Cards #1 - 51 have the 1957 design. 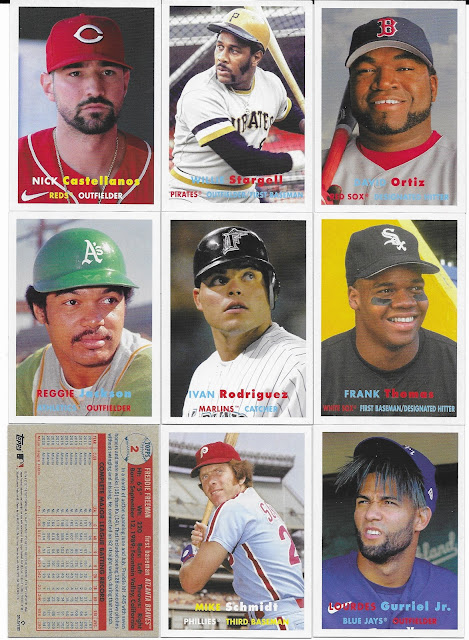 We found 33/51 (64.7%) base cards from this subset.  For the most part, the 1957 cards feature close-up head shots of the player on the front of the card (with rather difficult-to-read white and yellow lettering for the player, position, and team name).  I decided to pick out my personal favorite 8 cards from the subset to scan above (plus one card back so that you can how faithful Topps was to the original 1957 card design).
Cards #52 - 100 have the 1962 design. 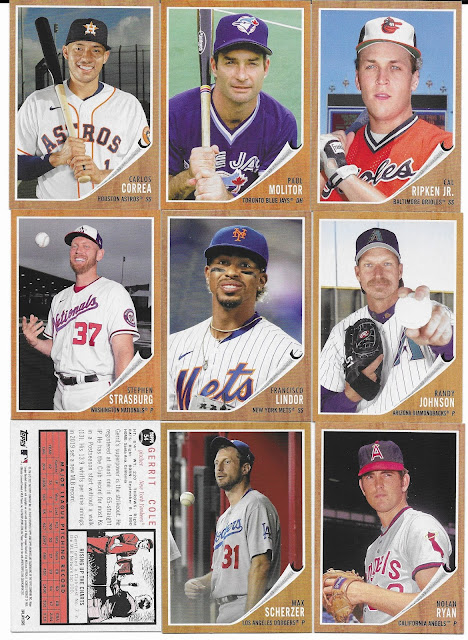 We found 31/49 (63.3%) base cards from this subset.  The 1962 design features the famous wood border and most of the images here are headshots as well, though from a "slightly further away" angle.  From my (untrained) eye, the images on the 1962 design seem a bit too bright and colorful as compared to what I think of when I think of the 1962 design...  I'm not complaining though, I prefer the bright pops of color in my baseball cards!
Cards #101 - 140 have the 1973 design. 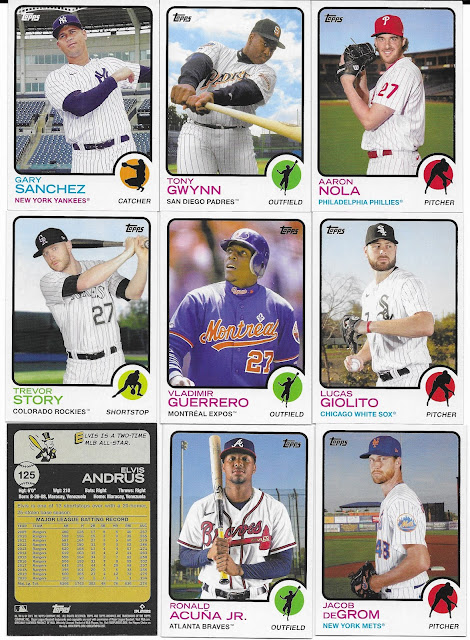 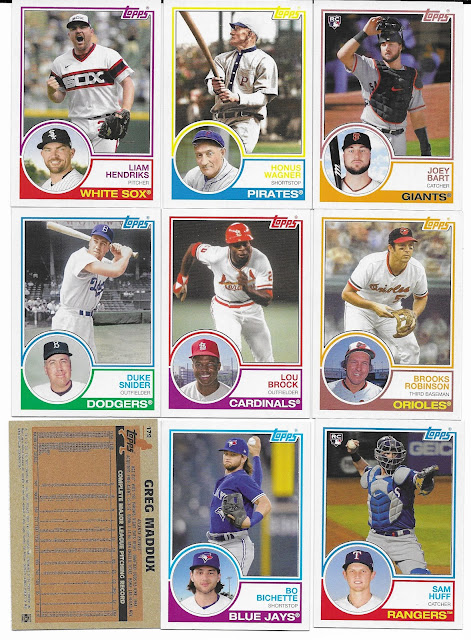 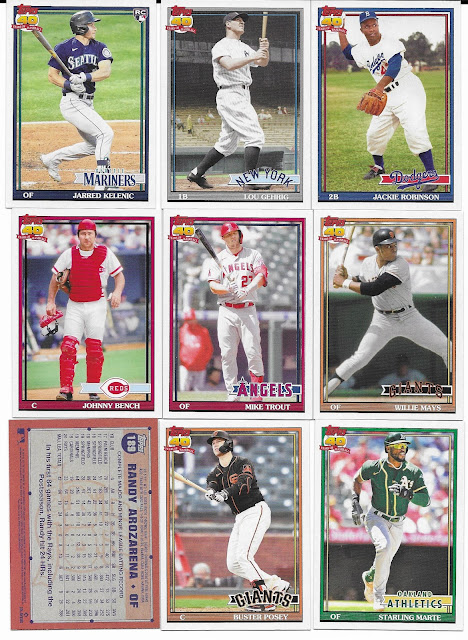 We found 10/20 (50%) of the base cards from this subset.  When I first saw the various years that Archives was "honoring" in its design choices, I was excited to see 1991 on the list.  Unfortunately, for reasons that I cannot explain, Topps decided to only have 20 cards with the 1991 design.  Perhaps they didn't have enough photos worthy to go on the 1991 design?  After all, the original 1991 Topps set is chock full of great photography - a set that can put even Upper Deck on notice!
Cards #201 - 239 have the 2001 design. 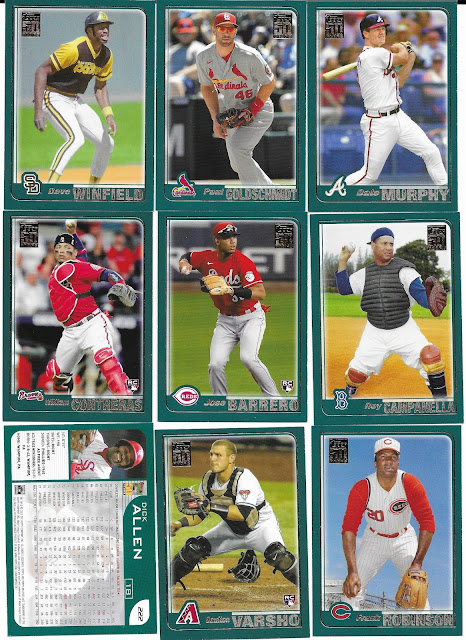 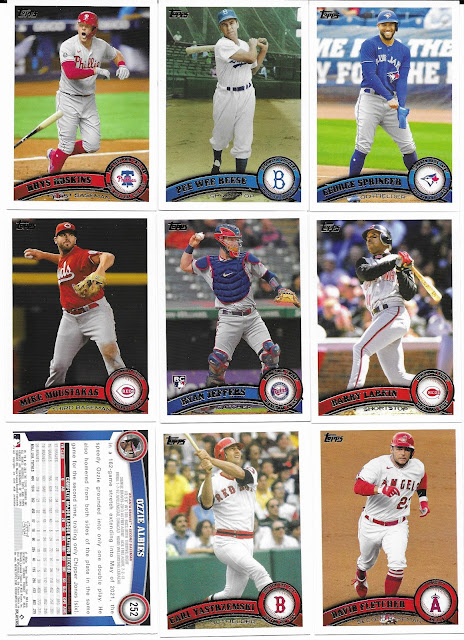 We found 24/40 (60%) of the base cards from this subset.  Like the 1991 set, I was excited to see the 2011 design make an appearance this year in Archives as well.  The gold foil throws me off a bit (pretty sure the 2011 set used silver foil throughout) but otherwise these are great looking cards!  The 2011 design is one of my favorite Topps designs of the last twenty years or so!  Also, super happy to have landed the Barry Larkin card in this box!
Then, cards #280 - 300 have the (fictional) 2091 Topps design. 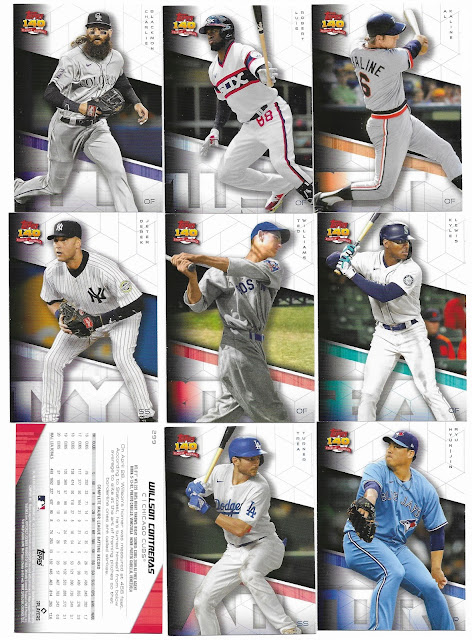 We pulled 13/20 (65%) of the base cards from this subset.  Being honest, this is my least favorite of the subsets, though the idea of a "future" base set design is kind of cool.  I guess I simply don't care for the design - lots of random lines and a stripe of "background image" makes for an odd looking card...sort of a late 90s Upper Deck rejected card design idea if you ask me.   Of course, we now know that Topps is actually losing their baseball card license in a couple of years so I doubt we'll be seeing a 2091 release from the company!
And that's the base set which is the meat and potatoes of the Archives experience!  This year's set highlights a number of strong Topps designs (1991 and 2011 being my favorites but honestly all of the old designs they chose this time around are nice).
Moving on to the inserts now, we'll begin with the 1:6 packs Movie Poster cards. 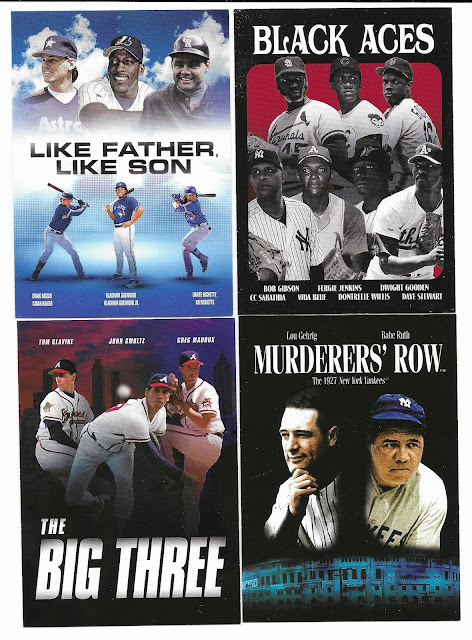 Our box had the expected four Movie Poster cards.  I like these quite a lot - even if I was a bit surprised to see that Topps made a poster called "Black Aces" in today's day and age.  There's a Reds poster card in this set featuring the Big Red Machine that I'd love to acquire but alas, this particular group break didn't yield it for me (in either box).
Next, the 1963 Topps Peel-Offs (seeded 1:5 packs). 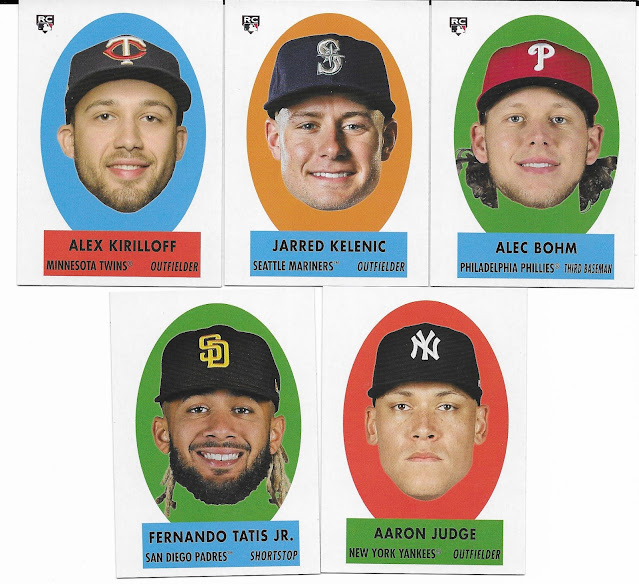 We ended up with five of these which, again, is right on the mark for a 24 pack box of cards.  I don't have much else to say about these, they are kind of dull for my tastes I guess (and I feel like the floating head concept has been kind of done-to-death lately).
Our final insert set that we found was the 1991 Bazooka Shining Stars (seeded 1:5 packs). 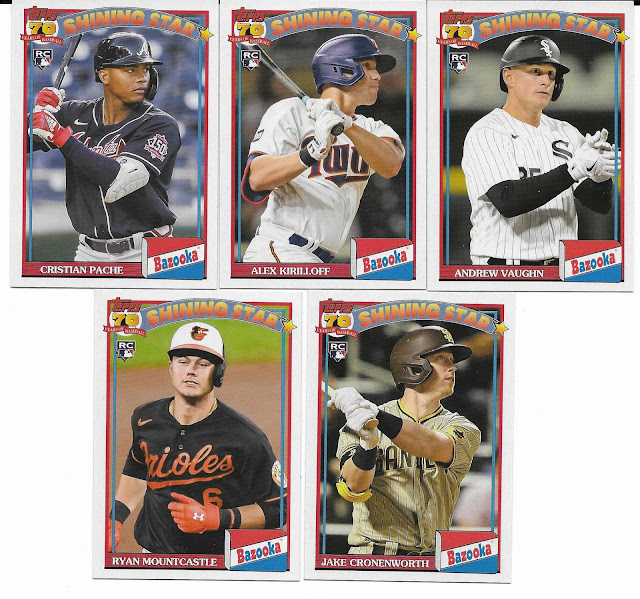 As with the Peel-Offs, we ended up with five Bazooka Shining Stars cards.  I do like the designs of these quite a bit (again, I love the 1991 Topps design of which the Bazooka design is a "rip-off" of)!
That does it for the inserts.  We did not find the 1:24 pack 1994 Topps Draft Pick set which was kind of a bummer...but as you'll see, that wasn't the only thing this box was missing (more on that in a moment).
Moving on to the parallels:
The 2021 Topps Archives set is chock full of parallels...and parallels of parallels in some cases.  We ended up with three parallels total all of which were serially numbered. 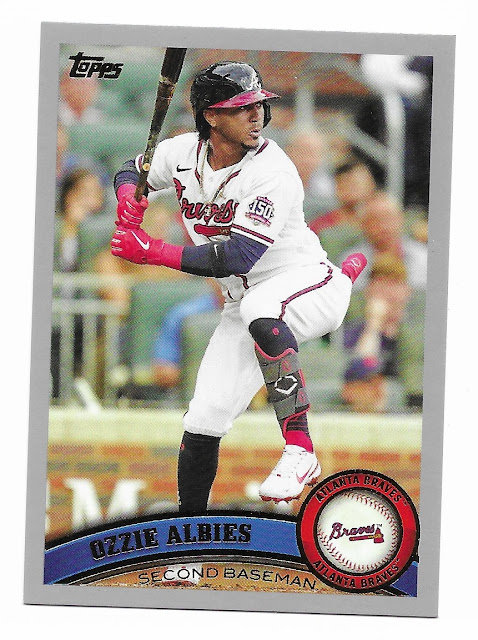 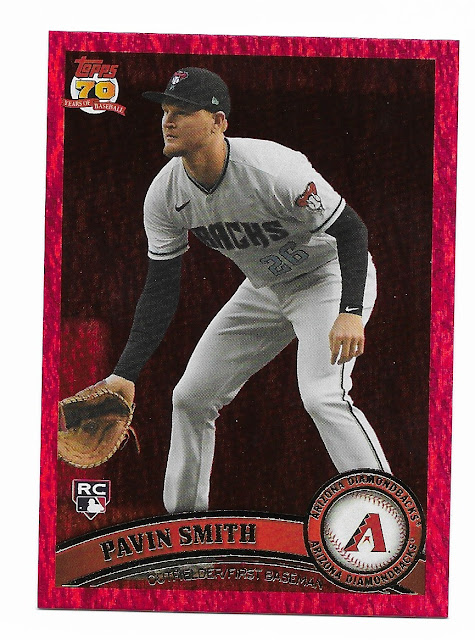 Next, this Pavin Smith is a Red Hot Foil parallel of the 70th Anniversary gimmick/parallel.  The Red Hot Foil Emblem variation cards are seeded 1:141 packs!  This card is #05/50 on the back.
Our final parallel was a Blue Foil, hobby exclusive parallel of David Peterson. 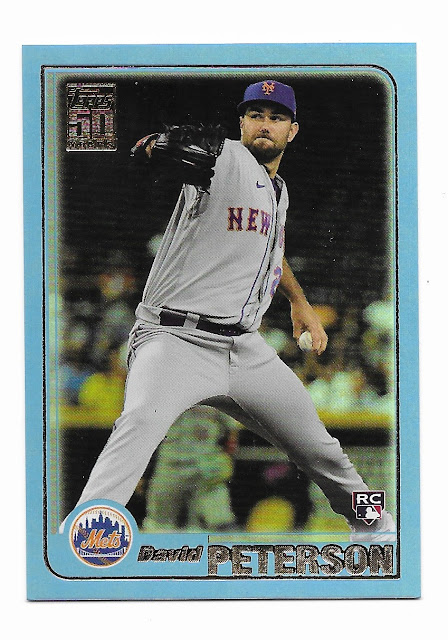 This card is numbered 01/25 on the back.  The Blue Foil parallels are seeded 1:94 packs.
Finally, we get to our hit.  That's right, hit.  As in, a single card.
You may remember at the outset of this post I said that each box of 2021 Topps Archives promises two autographs.  Well, our box did not deliver on that promise.  Instead, we got a single autograph of former Cubs great Derrek Lee. 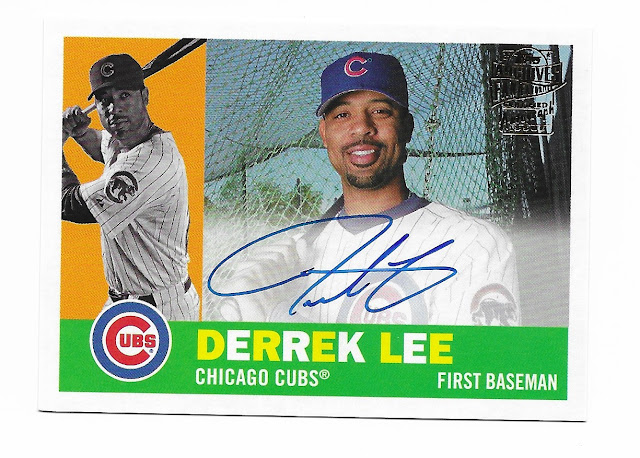 It's a nice looking card and a nice signature, but I can't help but be a bit disappointed to not have landed the second autograph as well.  For what it's worth, I did send in the necessary paperwork (UPC, date stamp, completed form, and purchase receipt) to Topps for a replacement auto but who knows if I'll ever see that (if I do end up getting a replacement autograph, it will go to whoever had that particular team in this group break - but don't expect anything soon as the form said something like allow 10-12 weeks for processing.)!
Overall, I give the 2021 Topps Archives the following rating:
Set Design:  A-
Collation:  C-
Opening Thrill:  B
Overall:  B-
I dinged the set design score slightly on the fact that Topps didn't featuring the 1991 design as heavily as others and because the futuristic design didn't appeal to me much.  Collation gets a barely passing score based on the missing autograph as well as the missing "box hit" insert of the 1994 Topps Draft Pick card.  That all said, the packs were quite fun to open and the parallels we pulled were certainly nice!
That does it for the first (of two) 2021 Topps Archives hobby boxes.  I do plan on reviewing the other box we opened for the same group break...and when I do, you'll quickly see what they say buying boxes is kind of like playing the lottery - some are amazing while others can leave you a bit disappointed.  Safe to say, the next box is pretty amazing!
Box Review Topps Archives 2021