on March 26, 2011
Oh Topps Heritage - why do you toy with me so?  In 2007, I managed to complete the entire set (minus one card that I still need) plus the entire Chrome set.  In 2008, I managed to complete the majority of the set - as I did in 2009.  In 2010, I was still reeling from fact that I hadn't completed the two previous years so I didn't buy a single pack of Heritage.  Now that it's 2011, I decided to give Heritage another try...but only with a blaster from Target.  How did I do?  And will it be enough to have me collect this year's Heritage set?  Let's find out... 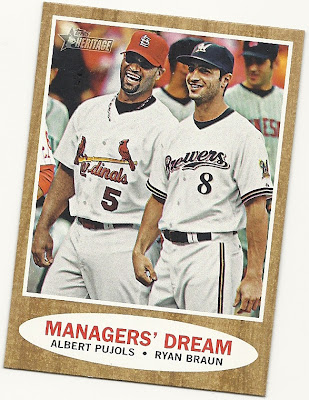 A nice start to the blaster - even if I don't care for either player since they are on rival NL Central teams!  I think it's amusing that while Pujols may be a manager's dream, he certainly isn't a general manager's dream - at least not this year! 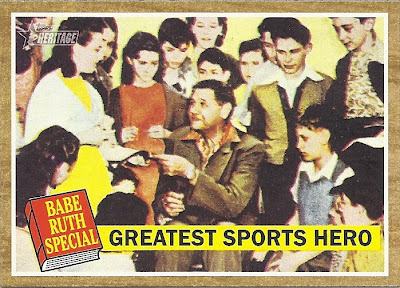 A goofy photo of Ruth (but that's ok, many of his photos are too well played out already).  I don't care for this subset - but I am happy that it celebrates Babe Ruth rather than Mickey Mantle.  I'm more sick of Mantle currently than I am of Ruth. 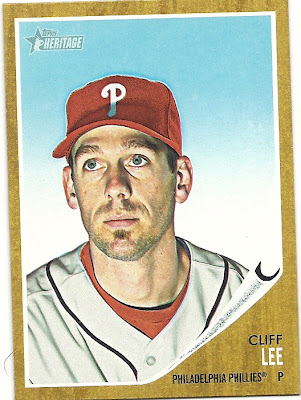 Many people have commented on the goofiness of Lee in this photo - and I agree.  However, the photo has just the right amount of quirkiness to make it fit in with a retro set like Heritage. 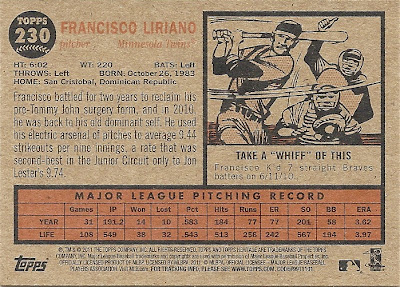 There's nothing particularly fascinating about the front of this card - so let's take a look at the back.  I didn't know that Liriano struck out seven straight Braves in a game last year, that's impressive!  I do like the cartoon and the decent sized write-up.  I don't like the one year of statistics (but I recognize Topps is staying true to the original design). 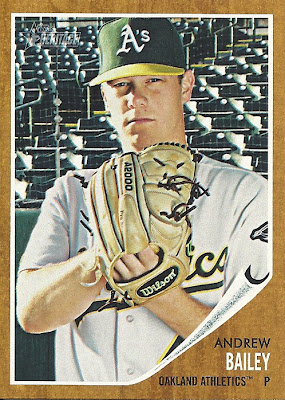 Nothing like having to pose in front of an emptry stadium for your card.  Bailey pitched in 47 games last year, so it's not like he never made it to the "big show". 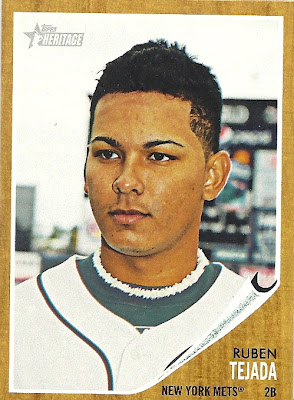 The back of the card says that Tejada "imposed himself intot he Mets plan with his sharp defense at both (second base and shortstop) and improving plate work."  That's all good until you look at his numbers - he hit .213 last year for the Mets and that is considered improved?  Ouch. 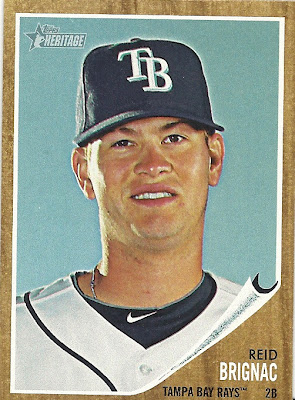 Want to win a bar bet?  According to the card, Reid tied for the AL lead in pinch hits in 2010 with seven.  I bet there's no one that would have guessed that! 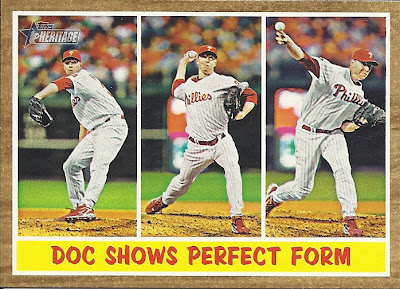 Why do most of the cards have one year of statistics but Roy's card has his entire career - including minor league numbers?  This year's Topps Heritage set is confusing. 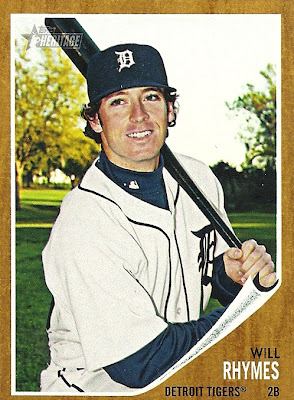 The short prints begin with card #425, so this marks the first short print of the set for me!  This year, the short prints are seeded 1:3 blaster packs, so if I'm lucky I should be able to nab 3 of them (eight packs per blaster).


Well, one pack down.  So far, I'm not entirely sure what I think of the set - or whether I am going to chase it down or make all of these cards available for trade.  I think the Will Rhymes card is my favorite in the pack (but not because it is a short print).  Instead, the Rhymes is my favorite because of the background.  It looks like they took Rhymes to a town park somewhere in middle America and snapped a photo before he even had time to look at the camera!

As for the rest of the cards - if this pack is any indication, 2011 Heritage is boring!  A whole bunch of posed shots with a couple of even more boring hatless photos sprinkled about...blech.  I hope the other packs produce something more interesting - this particular pack certainly didn't inspire me to try for the full set.
Topps Heritage 2011