on August 31, 2011
One of the unexpected benefits (for me) of hosting group breaks is that I've been able to add some new trade partners.  One such new trade partner is blog reader Ryan.  I sent Ryan a bunch of 2011 Topps base cards plus some 2011 Topps Heritage cards.  In return, Ryan sent me a big 'ol pile of Gypsy Queen cards plus a few other assorted goodies.  Since the package of cards was quite large, let's do another Top 9! 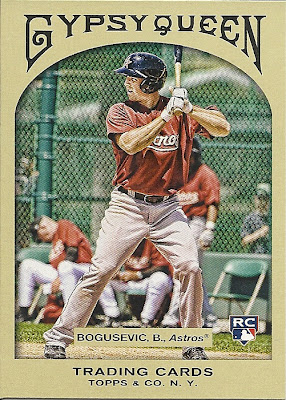 I don't have particular affinity for Bogusevic.  I do, however, like the nonchalant Astros in the background - this must be a batting practice shot at spring training or something.  It's different, it's quirky, and yet, at the same time, it's not distracting to the card.  All told, I like it! 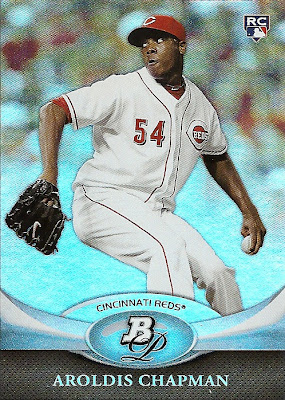 Here's another Bowman card for my collection that I didn't have to purchase.  Other than that, I can't say a heckuva lot good about Bowman...I simply don't like Bowman (except, of course, for the Reds cards)!  I'm glad other people buy the set and then send me the Reds, if I had spent my own money on the set I would have quite disappointed (plus I would have only ended up with Dodgers and Yankees most likely). 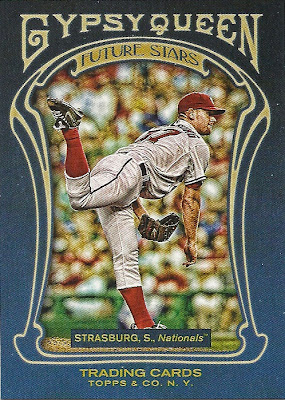 I liked the simplicity of many of Gypsy Queen's inserts this year.  Topps could learn a lesson from the set in that simplicity can work (at least in moderation).  Of course, we all know that moderation isn't exactly Topps' forte. 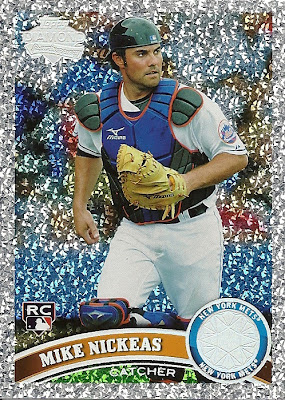 Ryan sent me a pair of diamond parallel cards (which earned him two entries into my contest).  I thought that the diamond parallel supply had dried up but it seems like there are still a few out there that people are willing to trade me.  Maybe I will finish my set after all! 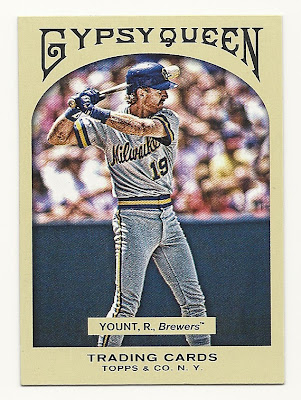 I like vintage players in my baseball set - and I like it even more when they aren't some short printed gimmick.  I guess that's why I liked Gypsy Queen and Lineage so much. 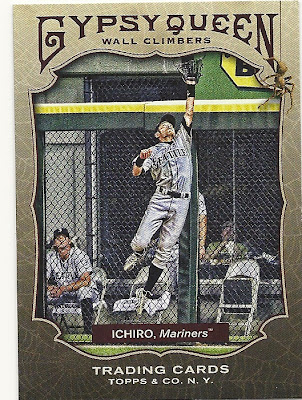 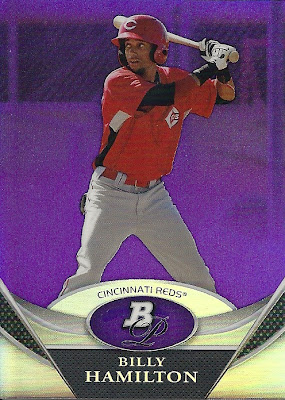 I have no idea if this is a parallel or if all Bowman cards have purple backgrounds (which turns out is quite hideous with the Reds uniform).  Either way, this card clocks in at #3 in my countdown simply because of the '91 Score goodness of it all.  Purple and red.  Only a color blind person could call that a good idea (and even then I'd put the odds at 50/50 that they say it's a poor plan). 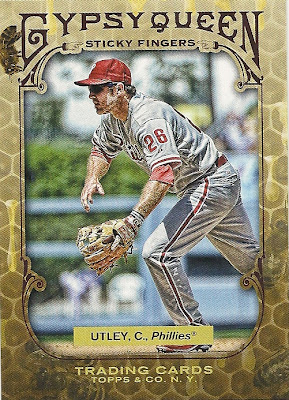 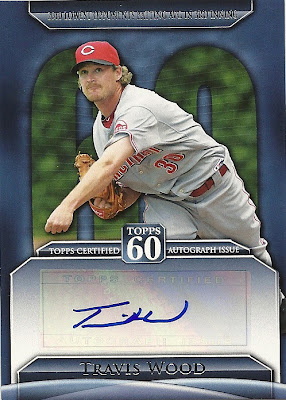 It's cards like this that remind me that there are indeed Reds hits in modern products.  I just don't pull them is all - but I guess that gives me another reason to trade.  On a completely different note, is Travis Wood's auto one of the worst ever?  I'd have to say yes.

Thanks for all the great cards Ryan!  And, as always, if anyone else would like to trade, check out my want list and make an offer!
Delivery Time Gypsy Queen 2011 Top 9