on December 27, 2012
I already posted a blog article looking at how I did with my 2012 New Year's Resolutions.

Now it's time to officially unveil my 2013 Resolutions.

1.  Complete at least FIVE of the following sets:
Note:  The number(s) after the sets are the cards that I still need to acquire.
As a set collector first and foremost, completing sets should be my #1 goal.  Last year, I had a goal of finishing at least three out of ten sets (30%).  This year's goal is at least 5 out of 15 sets (33%).  It's only slightly more ambitious when viewed in that light.  However, it's quite a bit more ambitious when you consider that last year's set completion failures make a second appearance on this year's list - along with some other sets that have languished on my want list for way too long!

I haven't decided whether or not to start a third blog that would be solely dedicated to LEGOs.  For now, I'm going to continue to post LEGO content here at Nachos Grande but I would be interested in hearing what all of you have to say about that plan.  Should I start a new blog for all stuff LEGO or would you prefer to see here at Nachos Grande scattered about posts with baseball cards and whatever else it is that I decide to talk about?

3.  Decide which baseball sets to complete and which to give up on.

I used to try to put every single baseball card I owned in a 9-pocket page and binder (in order).  Now that my collection has grown well beyond the capabilities of my four small bookshelves, I need to re-think my old strategy.  Some of the partial sets will be easy to give up on (1990 Donruss, yuck) while others will take some more serious contemplation (1990 Fleer - maybe?).  This year, I'd like to find the time to organize all of my sets and (hopefully) make a little room on my shelves for 2013 sets!

4.  Grow my Barry Larkin Collection to at least 200 scanned/written cards.

Yes, this is the same exact goal as last year - but I'm still almost 50 cards away from completing it.  If I can manage at least one Barry Larkin post per week, I'll have the goal completed before the end of 2013.  However, knowing me, that's a big if!  I also want to continue to acquire any all new Barry Larkin cards!

5.  Continue working on my Trial by Blogging blog.

My Trial by Blogging blog is supposed to be dedicated to my adventures in higher education teaching.  Unfortunately, I haven't put nearly the proper amount of time into the blog (in fact, it went dormant for the entire month of November).  I have a lot of things that I'd like to post - it's more a matter of setting aside a proper amount of time to do so.

6.  Work towards making my collection self-sufficient in terms of money.

As with most people, money is an issue with me.  If I could come up with a way to make my collection self-supporting, it would take all the stress out of collecting!  I hope to use eBay and Listia (and possibly some ad funds from Google) to start the process.  I have no idea if it is feasible (some free review boxes would help Topps)!  I've decided to start keeping track of all my hobby related expenses (including LEGOs) on an Excel spreadsheet.  Hopefully that will help me make sure I stay in the black financially speaking.

I'm picking 120 as the magical number because that would be ten trades per month which seems doable.  I'm hopeful that there will be enough funds in my personal bank account to be able to buy some new cards (since that's the best way to rack up a high trade count)!  We'll have to see if the card companies produce anything worth buying first though...

This particular goal may seem a bit selfish, but I'm a numbers guy...  For awhile in 2012, my blog readership was going through the roof.  Then, for reasons that I can't fully explain, my average monthly number of readers plummeted.  I know it can't be my writing because it wasn't like I've ever been a master at prose - and certainly not for a few months at a time.  I'm guessing the back-to-school aspect (both for myself with work and my readers) contributed to some of the drop-off, but even so, that's a steep, steep decline.  The other reason that I can think of is the fact that after July I didn't buy a single new card set - no Bowman or anything else...maybe only the newest and greatest stuff drives people to my blog? 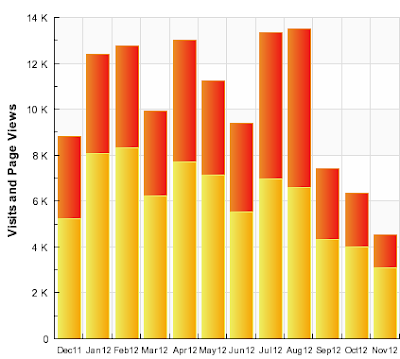 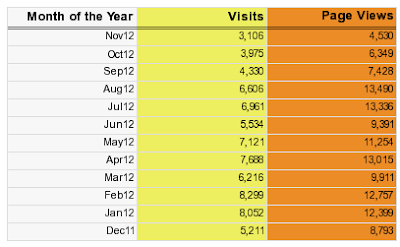 9.  Be a more active blog participant.

I really ought to keep a running tally each month on the number of comments I leave on various blogs. I love when people comment on my blog - and I'm sure most of you feel the same way.  However, it's so much easier to read a blog and move on (not to mention so much quicker) that most of us don't consistently leave comments.  I aim to change that this year.  In addition, I hope to continue to host group breaks and, possibly, another case break (though I did get burned for $80 in last year's case break that I haven't quite gotten over/recovered from).

In many ways, this is the most important goal for the life of my blog.  If I get burnt out, then you can kiss Nachos Grande goodbye.  Most blogs don't last nearly as long as mine (despite most blogs usually being of much higher writing quality than mine).  I'm proud of my longevity, but that doesn't mean that I can become complacent.  If I ever end up feeling like I'm forcing myself to write posts, I'll hang up the proverbial keyboard.

That's my list of 2013 Resolutions.  If all goes well, in about a year I'll be able to dissect each goal and see how well (or poorly) I did.  I believe that the goals are all attainable this year though, so hopefully I'll have good things to report in about 365 days!
New Year Resolutions