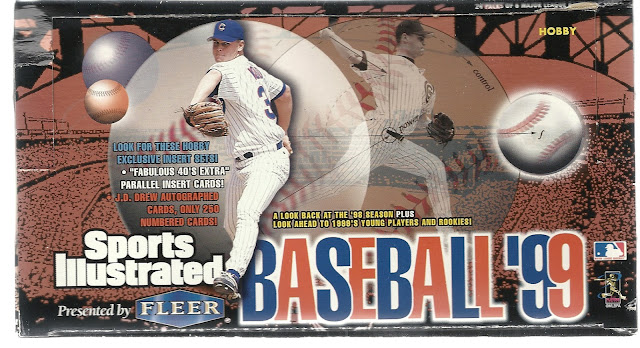 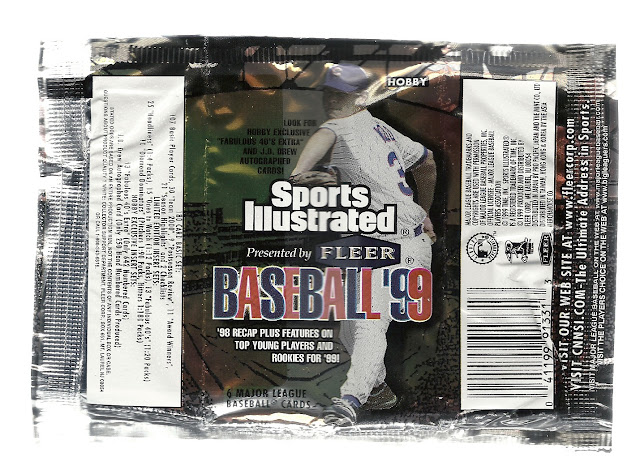 According to the pack wrapper, there are 4 different insert sets to chase plus another two Hobby Exclusive insert sets.


Although I didn't pull any of the hobby exclusive inserts (and really, the J.D. Drew autographs aren't nearly so exciting a decade-plus later), I did well otherwise.  However, before we get to the inserts, let's look at the base cards and the various subsets. 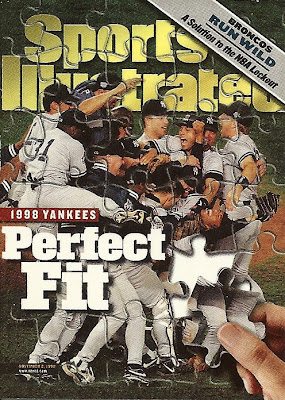 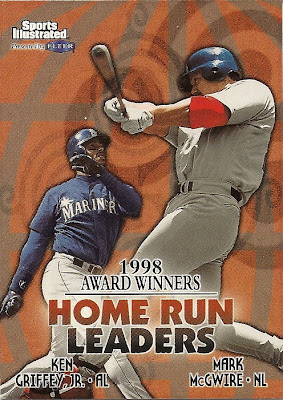 Beginning with card #10 (and ending at card #20), there are 11 different Award Winner cards.  Each card features the National League and American award winner for a specific category.  My box yielded 5 of the 11 cards in this subset. 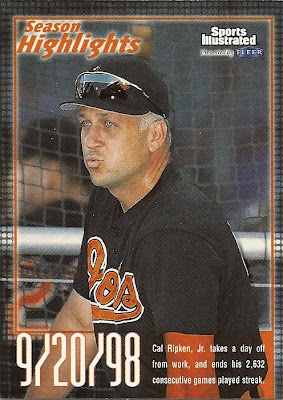 The next 21 cards are from the Season Highlights subset.  I fell 7 cards short of completing this subset (or, if you don't want to do the math, I ended up with 14 of the 21 cards).  The Season Highlights do not go in chronological order (an oversight if you ask me).  Some of the cards I got highlighted the Diamondbacks first game as a franchise, Chris Hoiles' two grand slam game, and Kerry Wood striking out 20 Astros among other gems from the 1998 Season. 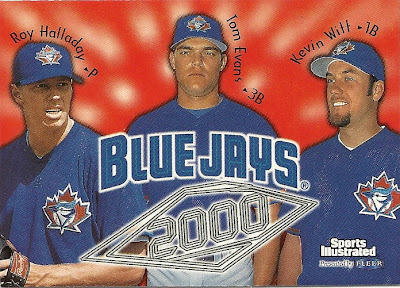 Continuing with the subsets, the next 30 cards are the Team 2000 cards (one for each of the 30 MLB Teams).  The cards highlight three young players for each team that are supposed to help the team by the year 2000 (i.e. the next year).  Looking over the cards that I got (23 of the 30), most of the featured players were total flops! 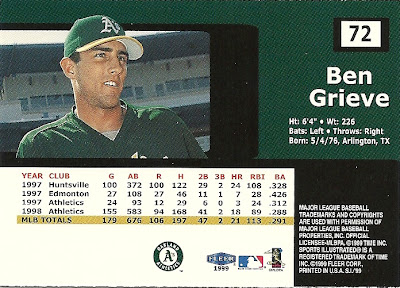 Finally, at card #72 in the set (remember it's only a 180 card set), we arrive at our first actual regular 'ol base card (in this case, Ben Grieve).  The front of each card has team colors and (for the most part) a nice photo of the player in question.  The back of the card gives full career statistics (which I like) plus a second photo (once again the color scheme is team specific).  There is also a small team logo at the bottom of the card (which makes searching for cards from a particular team a piece of cake)!

There are plenty of action shots and other unique shots in the set which is nice.  Some of my favorite base card photos include the following:
Sammy Sosa: 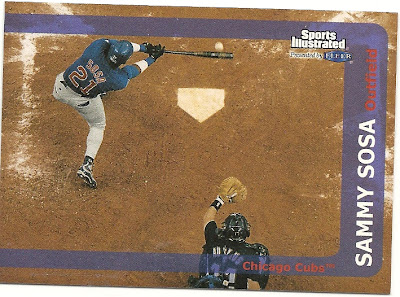 The overheard shot is cool enough, but look at the moment captured just as the baseball is meeting (or is it leaving?) the bat.  Great photo. Epic is the only word that comes to mind to describe this photo.  If I were a Cardinals fan, this would probably be one of my top 10 favorite cards. 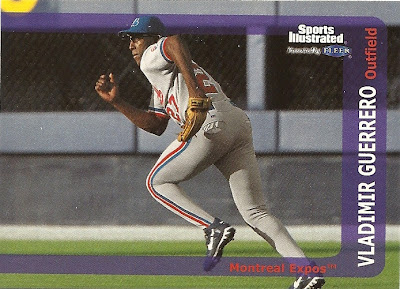 Not every shot is strange - some do nothing more than capture the essence of the beautiful game of baseball.  Seeing Vlad running after a batted ball is good stuff. 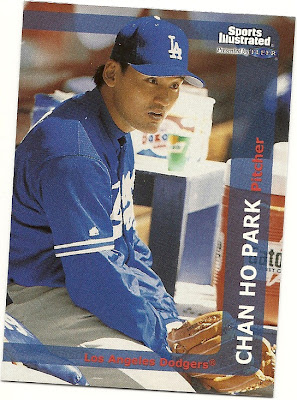 A few of the photos have a goofy element to them - this Chan Ho Park card was easily my favorite of the "goofy" shots. 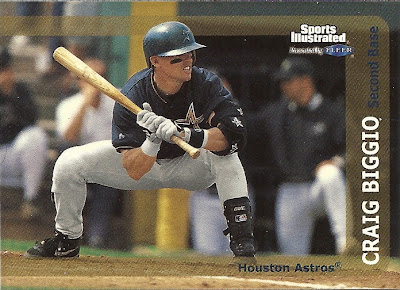 When I was in fourth or fifth grade and playing Little League, I used to do a similar maneuver at times to try and get on base.  Umpires didn't fall for it then, and I'd like to think they won't fall for it now. 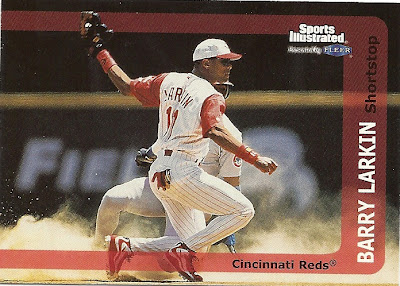 Of course, my favorite base card has to be the Barry Larkin card!  This one is particularly great though with all of the flying dust! 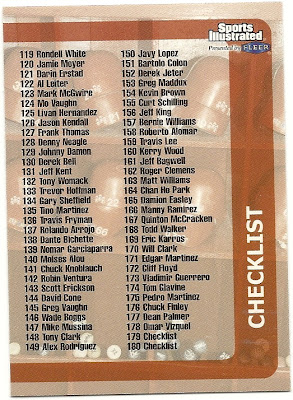 The final subset is only 2 cards in size (and I only got one of them in the box) and that is the checklists.  Not much to say about these except the fact that I like having checklists in sets!

I must say, the regular base cards are (for the most part) much nicer than the various subset cards. 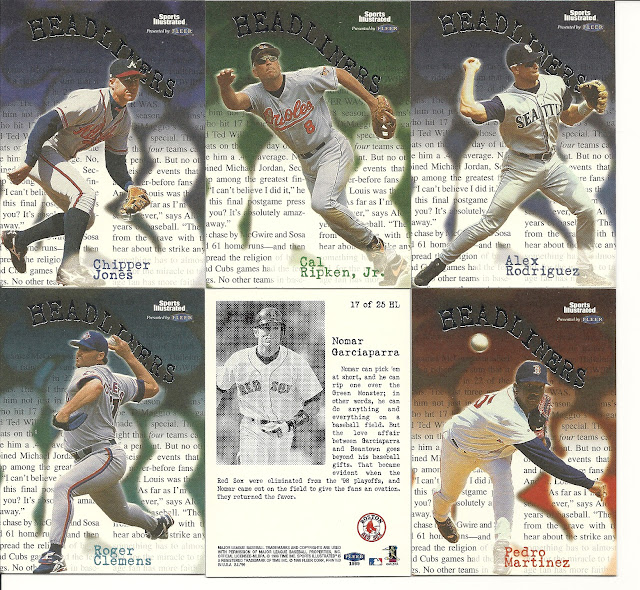 Since this is a box from the turn of the century, you know there should be a variety of inserts in it.  Luckily, Fleer didn't disappoint.  The most common insert is Headliners of which there are 25 total (seeded 1:4 packs).  I got six which is exactly as expected in a 24 pack box.

The Headliners have a matte finish on the front of the card rather than a glossy finish which makes the card feel a bit more like a newspaper (hence the Headliners theme).  The one shame is that the article in the background of the image is the exact same on all the cards. 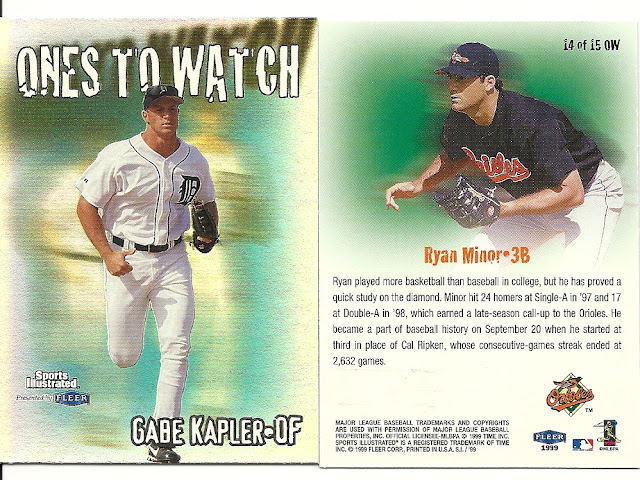 The Ones to Watch insert cards are seeded 1:12 packs so you'd expect two in a 24 pack box which is exactly what happened.  My Ones to Watch were of Gabe Kapler and Ryan Minor - certainly not the most impressive players ever.  The Ones to Watch are the shiniest of all the inserts in the set. 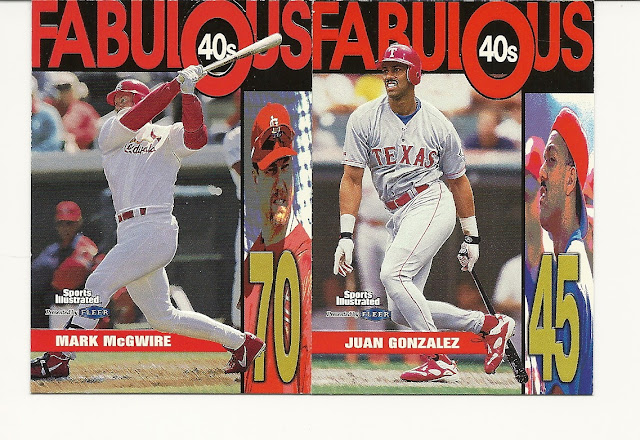 The final insert that you'd expect to find is the Fabulous 40's which are seeded 1:20 packs.  Interestingly enough, my box yielded two of them (Mark McGwire and Juan Gonzalez).  The Fabulous 40's cards are embossed which makes them instantly recognizable as compared to the other inserts. 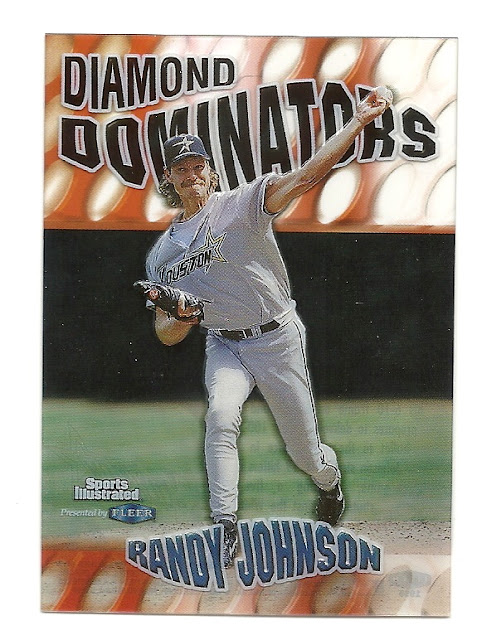 Although my box didn't yield any of the numbered hobby exclusive inserts, I did land one of the Diamond Dominators cards.  Mine was of Randy Johnson (a pitcher seeded 1:90 packs).  The Diamond Dominators are printed on a clear acetate card, once again making them stand out from the rest of the inserts as well.  The image of Randy is embossed (as is his name at the bottom of the card).  I would like to have a full Diamond Dominators insert set someday, they are my favorites by far out of the various inserts.

Overall, I give the 1999 Fleer Sports Illustrated box the following rating:
Set Design:  B
Collation:  A
Opening Thrill:  B
Overall:  B+

The base card design is great (especially a lot of the photography) but the disproportionate number of subsets (many of which are boring) hurts the overall set design score.  The collation within the box was perfect - no duplicates at all.  There aren't enough packs in the box to get a full set though which is a bummer for such a small base set.  Although you can get an autograph in the box, it's only of J.D. Drew which hurts the opening thrill.  Even so, I was excited when I pulled the semi-rare Diamond Dominator card.  This particular box earns a B+ overall, it's definitely a fun box to open though it won't floor you in any particular category.
Box Review Fleer Sports Illustrated 1999