on December 30, 2012
Yesterday, I began the process of busting 20 packs out of a repack box as part of Pack Wars II.  At this point, the leading pack as 16 points.  Will Allen & Ginter crush the 2011 Topps Series 2 pack or will Series 2 reign supreme for at least one more pack? 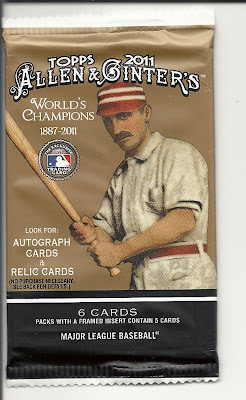 The 2011 Allen & Ginter set is a favorite of mine so I'm obviously excited to open the pack.  That said, there isn't much that I still need in the set so I'm expecting a bunch of duplicates.  Even worse, this pack only has six cards which means beating a score of 16 might be too difficult to do!

Ew, a Cardinal!  I'm no fan of Holliday's, though I don't despise him as much as I do guys like Chris Carpenter.  -2 for being the wrong team in red.

186.  Yunel Escobar - Blue Jays
Once again, another rather dull card.  I don't have anything against Escobar (or the Blue Jays) so I'll give this a +1. 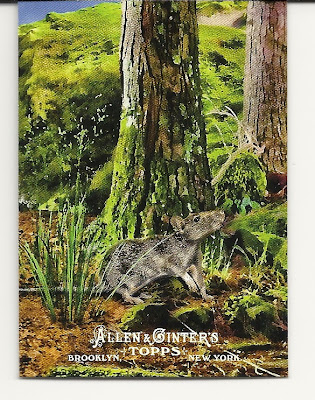 The Ascent of Man cards are a bit of a lightning rod for those who don't want discussion of creation vs. evolution cropping up in their baseball cards.  Ignoring that aspect, the set itself is pretty cool because it makes a giant mural if you line up all the cards in order.  +5 for the unique design element, +5 more for being one of the better images in the mural = +10 total. 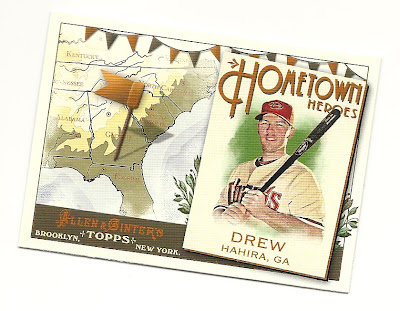 Another insert (though these are basically one-per-pack cards) unlike the 1:6 Ascent of Man cards.  I like the biographical information on the back of the card though, so +4 for Stephen Drew. 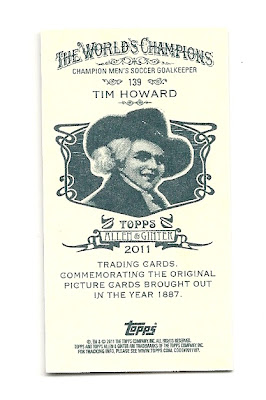 I love the mini cards, easily the best part of Allen & Ginter.  Unfortunately, I'm trying to collect the regular back minis, not the ad back minis!  That said, there are worse subjects to get than Tim Howard I suppose.  +5 for being seeded 1:5 packs.

Code card advertisement
It turned out that the ad cards were instrumental in solving the Ginter code back in 2011.  That was kind of cool then but it doesn't net the pack any points now.  +0.

Woah!  The Allen & Ginter pack has become the new "top dog" in the Pack Wars.  Too bad for A&G that there are still 17 more packs that need to be opened.  Even so, the bar has been raised slightly - will any other pack be strong enough to clear the new hurdle?