The Evolution of a Collector

on December 14, 2012
I've enjoyed watching the evolution of various collectors on the blogs while I undergo my own evolution as well.  Back before I ever thought about writing a blog about baseball cards (or anything else for that matter), I used to keep all of my cards in 9-pocket pages and binders.  At the time, I thought I would never get rid of a single card - only my duplicates would become trade bait (and/or sold on eBay or the like).

When I first started collecting cards, my entire collection was a direct result of my dad's generosity.  He used to buy my brother and I packs of cards from the grocery store.  From about 1989 through 1992, I used to love trips to the food store because it would (possibly) mean a new pack of cards for me to sort through.  To this day, I still have all my old 1991 Fleers (bright yellow), 1990 Topps (so many colors), and even 1991 Score - a set that I decided I was actually close enough to completing that I've enlisted the help of fellow bloggers in order for me to complete it.

Of course, that was when I was buying packs of cards from places like CVS Pharmacy.  CVS used to carry cards - but only two or three sets per year.  I didn't know about the existence of other sets.  Oh sure, once in a while I bought Tuff Stuff magazine and saw other card sets listed but I figured they must be from fancy hobby shops.  I managed to put the vast majority of the 1997 Upper Deck Collector's Choice set together just by buying pack after pack from CVS! 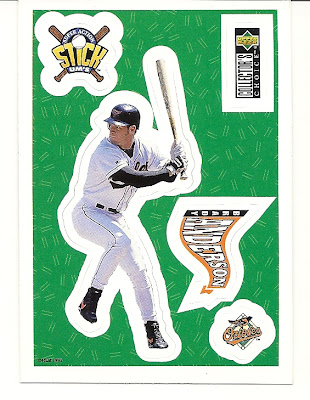 After CVS stopped carrying cards, I stopped buying cards since I couldn't yet drive.  Once I got my driver's license (about 14 years ago!), I had other things on my mind (girls, sports, etc.).  I basically didn't do anything with baseball cards until after college.

Once I graduated from undergraduate, I had a tiny bit of disposable income again - and for whatever reason, I decided to look at the newest baseball card sets.  From that moment, I was hooked back in.  However, it didn't take me long to realize that there was no possible way for me to continue my "every card gets a spot in a binder" pace if I was going to expand my collecting interests beyond a single set or two per year.  By the time 2008, 2009, and 2010 rolled around, I was working on many, many sets per year (as evidenced by all the sets still remaining on my want list to this day).

Since then, I've become a bit more selective in what I try to collect.  In the past couple of years, I have cut back on the raw number of new sets that I purchase (this year I only bought cards from two sets:  Archives and Allen & Ginter).  I've also decided to only chase the Reds cards from most sets - all my other cards (duplicates or not) will eventually be used as trade bait.

However, I'm still a set collector first, a Barry Larkin collector second, and then a "generic Reds" collector third.

Besides cards, my collecting interests have also spilled over to other areas.  Like many other bloggers, I have found a lot of the newest card releases to be boring and/or not worth the money to actually buy and collect.  Thus, I've shifted some of my cash earmarked for trivialities like collecting to a different hobby of sorts:  LEGOs.

In fact, I've recently started completing more and more baseball cards for LEGOs trade.  I'll happily trade for either unopened packages of LEGOs or for various minifigures that I am still missing.  That's exactly how I ended up with the latest trade package from Ryan over at "O" No!! Another Orioles Blog.
I sent Ryan a smattering of cards he wanted and in return he sent me the cards you've already seen in the post, plus a five different LEGO figures. 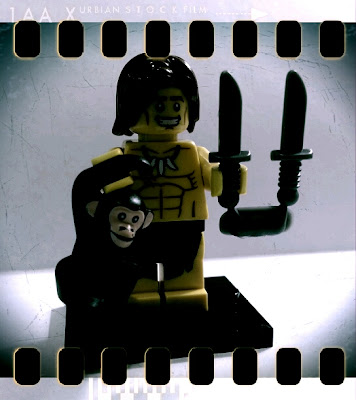 The Jungle Boy was in an unopened package.  Unfortunately, it's one I already have but that's ok since I'm sure I can use it as trade bait.  My collection of minifigures is now over 30 different little men (and women) so duplicates are bound to happen. 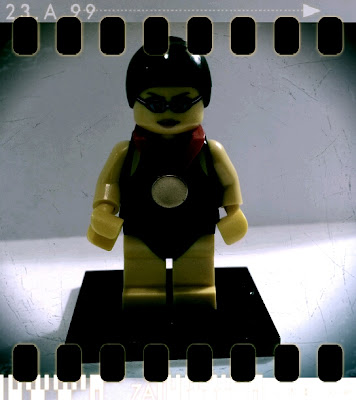 The swimmer was a new figure for me.  I now own a bunch of different athlete figures including a baseball player, tennis player, football player, soccer player, and a female skier. 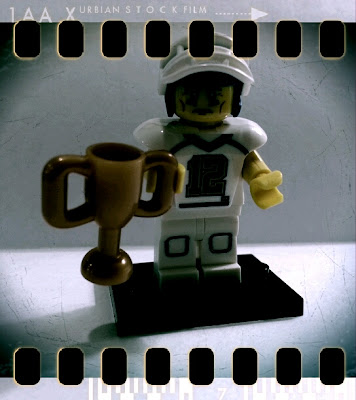 I already owned a football player (another figure from an unopened package) so this one is also going to be used as trade bait.  Luckily, of the five figures that Ryan sent me, three were brand new to me which I thought was a pretty good percentage considering how many of the figures from the recent sets that I already own! 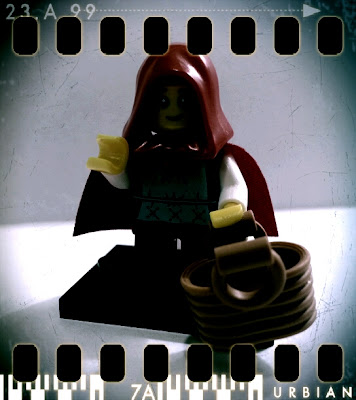 My wife liked this figure best.  The little girl in red really is little, she's about half an inch shorter than the "normal" LEGO minifigures!  The basket is a nice touch (there are even two holes on the bottom of the basket so that it can sit properly on a LEGO base plate if one desires). 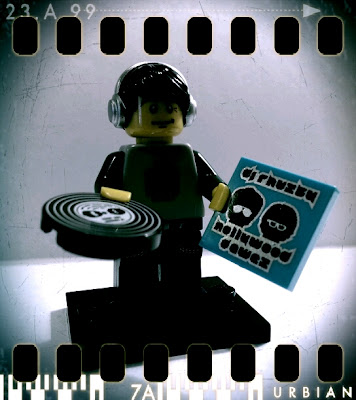 The DJ is a strange fellow, but kind of cool at the same time.  His hair piece includes the headphones (and my wife claims that my hair looks like the DJ's since I need a haircut).  His album is "DJ Rhuzty:  Hollywood Dawez", or at least that's what I can make out with the strange lettering on the LEGO brick.  He also holds a record which instantly adds to his coolness.

Thanks for the great trade Ryan.  You managed to hit all aspects of my collecting evolution - old sets like 1991 Score, newer stuff like UD Masterpieces, some Barry Larkin cards (including a couple that I didn't scan), a new Reds card, and a bunch of LEGOs.  Now that's a trade that is awesome if you ask me!

Do you want to trade with me?  If so, check out my want list and make an offer!