14 Packages in the Mail. (Take One Down, Pass it Around)

on March 08, 2013
As the post title suggests, I've recently mailed out 14 different packages to people.  That's one way to jump start my "trades completed in 2013" totals!  If you live in any of the following area codes, you might be getting mail from me soon (or it might have already arrived since some packages went in the mail quicker than others).

Luckily for me, it's not all outgoing mail.  I've also received a few trade packages of my own lately (and I expect I'll be receiving a bunch more in the near future).

For today's trade post, let's shine the blogging light on the always amusing Dayf from Cardboard Junkie.  I've sent Dayf a couple of small trade packages lately - and in return?

Well, he knocked off one my Elusive Eight cards! 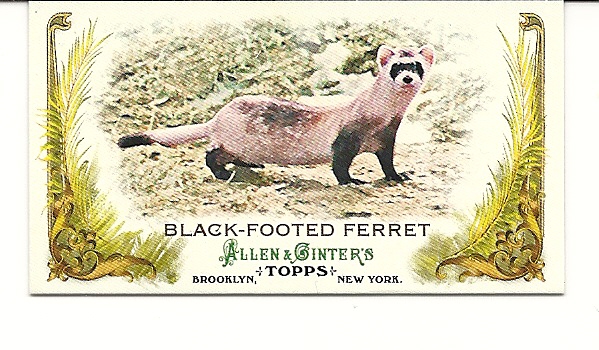 It's been a long time since I've been able to change my Elusive Eight list - it's always great to get a card that I've needed but it's even better to get one that finishes off a set.

Speaking of finishing off sets, I'm hoping that's a constant theme for 2013.  I recently placed an order with Check Out My Cards that will put a serious dent in my want lists as well (including another Elusive Eight card).

Turning our attention back to Dayf's trade package (and specifically the Black-Footed Ferret).  The pesky animal in peril set proved to be quite the challenge to complete!  However, now that the Ferret is in my possession, I can happily report that the only cards that I'm still missing from the 2011 Allen & Ginter set are a few N43 box toppers and a single cabinet card!

The Ferret might have been the card I was happiest to receive, but it wasn't the only card that I needed in the trade package. 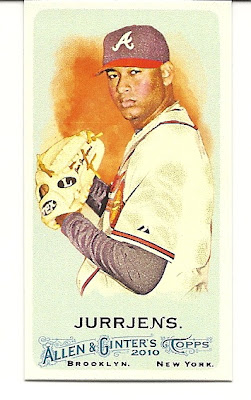 I'm now one card closer to my 2010 Allen & Ginter mini set thanks to Jurrjens no longer being on my want list.

In regular sized card news, I was able to pry four 2000 Topps Stadium Club cards away from Dayf, including this sort of unique Jose Lima card. 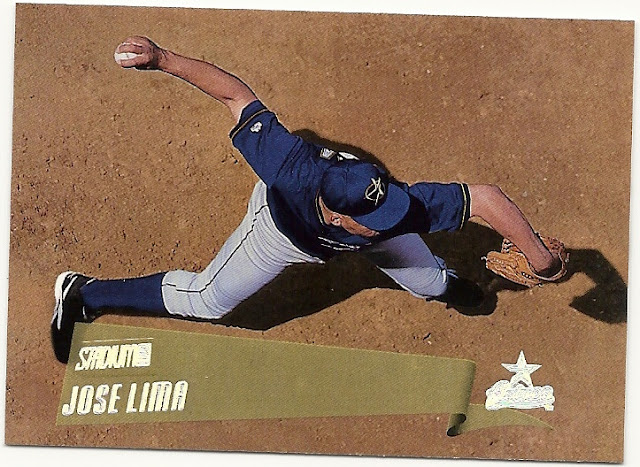 Finally, Dayf threw in a couple of Barry Larkin cards for me - one of which was brand new to my collection: 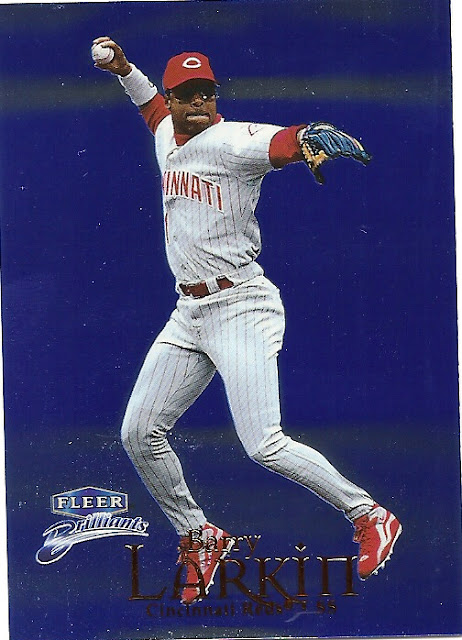 Parallels can be such a tricky thing to track down - it's definitely the biggest weakness in terms of my personal Barry Larkin Collection.  I'll gladly take any and all parallels that I can get my hands on!

A great, great trade package if you ask me.  A few cards from my want list, a new Larkin, and a card knocked off the Elusive Eight.  I certainly can't ask for anything more than that.

If anyone else would like to trade (even if you can't beat Dayf's package), feel free to check out my want list and make an offer!
Cardboard Junkie Delivery Time